Teddy is a different beast 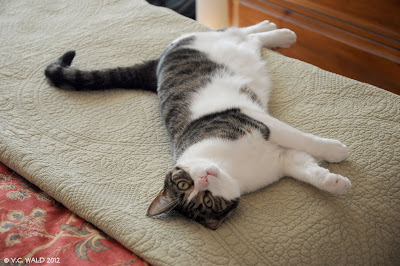 It's been awhile since I reported on the doings of dear Teddy, who first incorporated himself into our lives in October of 2009. He's quite the little family member, always entertaining, always companionable, always up to something. In so many ways he's just like his predecessor, Winston (RIP), but in one major way, Teddy is most definitely his own guy. Winston loved, adored, sought out physical contact with us. If it wasn't forthcoming to his liking, he would shove his head under the nearest available human hand in the hope of a good scratch on the chin or a back-rub, in response to which he would purrrrrrr happily. If I brought his brush out and ran my fingers over the bristles he would awaken from the deepest sleep anywhere in the house and come running for a good grooming, so happy to endure it as long as we were willing to keep it up. When he was a baby, he would sleep lying on my chest, over my heart, and later, as a big cat, glued to my side all night.
Teddy, however, isn't so interested in physical affection or even much in contact, and in fact instead of doing what most cats do and arching his back when a hand comes down to pat him, sometimes he ducks and moves away, with an irritated little "mew!!" (translation: you know I'm not into that, so STOP IT!). All of this is a shame, because he's a particularly yummy cat to hug, with soft, soft fur, and a buttery little squeezable body.
As he "matures" (relatively speaking) he has come to tolerate brushing for a few minutes at a time, and now, if he's in the mood, lets me pick him up and cradle him like a baby while scratching his neck and behind his ears, closing his eyes contentedly while I work on squeezing a bit of purring out of him.This makes me at least as happy as it makes him.
But what Teddy really responds to and thrives on (besides anything that resembles play) is being told he's a GOOD CAT!! A gooooood boy, a sweet, pretty little pooddy-tat, mommy's favorite kitty, and that he's the best love-kitty ever... He flops over on the floor or the bed and looks me in the eyes, rolls over, squirms, rolls over back again so he can look at my face, stretches, balls himself up, stretches, all the while doing the "milk tread" (kneading) until purrs start to pour out of him.
Teddy was yelled at a lot in his growing up years (well, OK, we still yell now and again,  intent on interrupting whatever little trouble he's making at the moment).  Now sometimes if I yell at him (TEDDY!!! STOP DESTROYING THE MINI-BLINDS!!!!) he'll let out a hurt, pathetic MEEEWWWW in response.
Isn't funny that this feline so adores being told he's a Good Cat, and is so sensitive to the tone of my voice that he cries when assaulted by harsh words?

Posted by Veronica Wald at 3:02 PM