As it happened, or as staged?


Turn on your sound for a big clue.
Posted by Veronica Wald at 7:30 AM 5 comments:

What's real, and what's not, and does it really matter?

Wildlife lovers, do yourselves a favor and read this article, What's Real And What's Not Behind Reality TV's Nature Shows? For some time I have been aware of the ethical issues presented in the article, for example, recently there was lively discussion on the matter among the letters to the editor of Wyoming Wildlife. There really are two sides to the story, in the sense that if the purpose of wildlife filming/photography is to educate, then it seems justifiable to use game farm animals or "rent-a-wildlife" like Bart the Bear actor, as long as the animals are treated properly, although I also think it is reasonable for the viewers to be notified.
I personally know several superb wildlife photographers, including Doug Dance (still photography), who works extremely hard to capture un-manipulated natural reality in all its exquisiteness, and Bob Landis, film-maker/videographer par excellence, who likewise works night and day, every day of the year, at his craft, and who never, ever uses captive animals no matter how expeditious it might be to achieve results. But neither Doug nor Bob works under the thumb of the corporate media and their schedules can attune to that of the natural world they portray so well. For the moment, I will not chime in on the reality, or not, of the human wilderness survival "reality" shows, nor on that of any other "reality" TV.

Please leave your comments, this issue is not straightforward and bears more, much more, discussion.

*Taken at West Yellowstone's wonderful Grizzly and Wolf Discovery Center. Is it 100% obvious these wolves are captive?

Like most bloggers I think, I enjoy and appreciate comments, even those from the rare troll; I eventually edited the comments from Fiddledeedee, deleting all of my own responses – which I tried to couch calmly and rationally–and a few of his/her less-than-diplomatic answers. As  is frequently so in such cases, Fiddledeedee’s topic quickly turned from asserting the apparently inviolable value of cultural relativity to the failings of my character. Nonetheless, I decided to leave a few choice remarks in situ for posterity.  [Sorry about the dead links on that post, it’s a hazard of long-term blogging.]
Sometimes, though, my posts elicit comments emailed rather than appended. Two particularly wonderful ones rolled in last month.
The first was from the affable Fem Bromley, a Netherlands ex-pat living in Canada. She wrote about my 2009 post on the lovely work of the Dutch naturalist  H.J. Slijper, about whom I knew almost nothing. She said [lightly edited for clarity]:
“I saw your postcard pictures of Henk Slijper. I'm Dutch and thought you would like to know a little about him. He passed away in 2007 after he had a few strokes. I knew him very well I took care of his mother for 9 years, and he came often home with his falcon on his shoulder. He was a very nice man and a very good painter. He spent some time in jail as he was involved during the second world war with the  resistance, and got caught.”
She was able to go on to give me more information about his career and reputation:
“He had expositions in AMERICA in 1981,1982,1983,1987,1989 (Birds in Art) at Leigh Yawkey Woodson Art Museum.  Also there are a few books out with his drawings. Henk also painted for the laboratory in water colour for illness in plants and bulbs, painted for catalogues for the companies of tulip bulbs. Henk worked together with Prince Bernhard for the nature foundation. He was awarded by the Royal Horticultural Society in London with the Silver Gilt Grenfell Medal. ALSO WAS AWARDED with the Silver Anjer in the Netherlands.”
With these details, and especially with the knowledge of his first name Henk (the postcards are attributed only to H.J. Slijper) Google turned up more interesting information about the artist whom I feared was obscure, underappreciated, and unknown outside of Holland. Among his enduring legacies are his designs for falconry hoods, as it happens, another interest of mine.
The second email came from a relation of the family that owned the children's German language camp, Landheim von Specht, that I wrote a little about over the Thanksgiving weekend last year. In that case, I provided her with entirely new information about her family's story, something I found very gratifying and hope someday someone will do for me about mine.
Her initial inquiry was:
“I'm a relative of the ‘von Specht’ family in Starnberger See, but have never heard about the ‘Landheim von Specht.’ Was it run by someone with the family name ‘von Specht’? I'd be curious if you could tell me more about it.”
The next day I answered, “...as I was only 13 years old at the time, I don't believe I could now recall (if I ever knew) the first names of ‘Frau und Herr von Specht’ but they seemed to me to be very elderly at the time they were running the international children's German language camp. Herr was bedridden, Frau was vigorous. They had a kennel of several Afghan hounds, all of whom...were named Rahu. As you can tell from the photo, the estate was right by the lake, directly across the road from it as I remember. The reference to Landheim von Specht came from the back of one of my photographs, in my childish handwriting....”
She responded “...So the Landheim was definitely run by a Herr and Frau ‘von Specht’ or possibly just a couple by the name of ‘Specht’? ... At the time my relative Joachim von Specht born 1894 lived with this wife in Ambach am Starnberger See. We only know him as an ‘author’, but maybe this family was running the Landheim?”
So it seems even my distant childhood memories have added substantively to her efforts to reconstruct her personal past. What an unexpected reward of blogging!

Just a few random shots, post Taken by Storm...the Storm started the afternoon of Tuesday, February 1, and ended the afternoon of Wednesday, February 2. The first three photos were taken the morning of Thursday, February 3, when the city started to come back to life. The fourth pic was from that evening; the storm had scrubbed the sky clean. The last photo is from today, Saturday February 5. There are massive piles of snow everywhere the plows have been, causing especially large vehicles like city buses untold misery coming around corners and the like.

Posted by Veronica Wald at 12:44 PM No comments:

There are only two things being reported on the Chicago area news: the revolution in Egypt, and the Storm of The Century in Chicago.
It was not a tempest in a teacup. It was a TEMPEST. Was? Is. It's still carrying on outside, though from my 11th floor condo perspective, things have settled down extraordinarily since last night, when it peaked. Well, I'm not sure I would say it peaked, in the usual sense of a point on a line graph at the top between steep upward and downward slopes. It plateaued, raging unchanged for hours and hours and hours.

We can't say we weren't warned. For the last 48 hours all radio and TV channels trumpeted warnings: The Storm of the Century is coming! The sky is falling! Sixteen to 24 inches of snow! Dangerous gale-force winds! How often this kind of anticipatory hyperbole is deflated when in actuality we manage to pile up 4 or 5 inches of snow. This time, they were right, and the prediction has so far been phenomenally accurate. The winter storm warning went into effect at 3:00 p.m. yesterday, just about the time I arrived home. The president of the organization I work for had sent around an email with subject, "Winter storm event" (so that's it's called!) suggesting people leave while the going was good, and announcing that we are to work from home today, so here I am, signing off the blog momentarily to carry on the good fight.

But before I go, I have to say, I've never experienced anything like last night's storm. The wind coming unimpeded off of Lake Michigan seemed to blast right through my (modern, industrial-strength, double-paned, heavy aluminum-framed) windows at high velocity, making it uncomfortably cold and creepily noisy to sit anywhere near them. Somewhere deep inside my building, a 15-story mid-century mid-rise, something set to vibrating at about the same frequency of a jet flying within hearing range overhead, the oddest, steadiest background hum I've ever heard in the the 23 years I've lived here. The view outside was so whited-out that it wasn't possible to see snow, only occasional long cloud-like streams of scintillating moisture shooting past horizontally against the background glowing gray from the city lights.  I kept thinking of the early Arctic explorers, imagining homesteaders in their sod houses on the Dakota plains, stray kittens huddling in alleyways, and above all, Chicago's homeless unwilling to go to shelters. Soon we'll know how many did not survive Chicago's Storm of the Century. 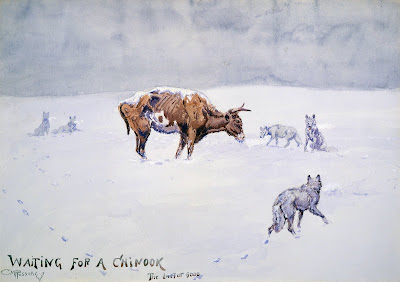