The now 21-year old beloved Grand Teton National Park grizzly mother, known by her wildlife management number "399" has been seen again in this, the spring of 2017, with two new cubs. Evidently after her lone 2016 cub was killed by a car, she became receptive and crossed paths with a male grizzly in time to be impregnated again. Her longevity and her fecundity are remarkable. Fortunately, the Park Service is becoming more protective of her and her successive offspring. I understand the road through the area she has long frequented has been closed to auto and foot traffic to help give them safety and privacy to just be wild bears. Perhaps she'll lead the kids closer to the main road - not good for bears but good for my soul to see and maybe photograph them - while we're there next month.

Meanwhile, Yellowstone National Park has recently seen an increasing number of "roadside" female bears, including three or four mother grizzlies and cubs born either this year or last year. The yearlings will spend one more summer and winter with their mothers before being pushed away to pursue lives of their own and to allow their mothers to breed again.

Roadside bears - in theory, mother bears raise their cubs in proximity to human activity to discourage the greatest threat to their babies, male bears that kill them in the expectation that the mother will come into heat again (as did 399 last summer after "Snowy" died) - are a hazard to people, cars, and themselves. This is Yellowstone grizzly bear number "815" who, after allowing a very sizable crowd to watch her and her year-old cub, came down from the rise where they had been napping to a pullout where cars were parked. Most people were out of their cars and some distance away, but some were close (I was not; this photo was taken with a 600 mm telephoto lens) and trying to get pictures with phone cameras and iPads, none of which have sufficient telephoto capability to assure a decent photo from a safe distance. Fortunately 815 just rooted around a bit, then led her cub past the pullout to where there were almost no pedestrians and all traffic was stopped to safely cross the road. 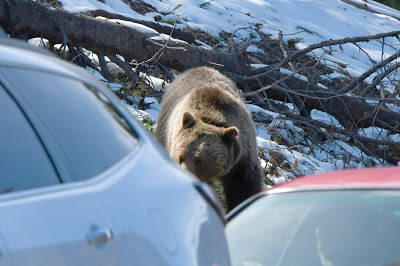 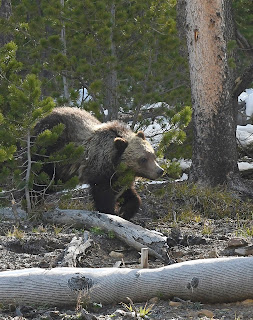 Amusing Musings is on hiatus, largely because there's too much, rather than too little, to write about. Please check back periodically as, just like the mountain blue birds, the muse may return and the musings may resume at any time. 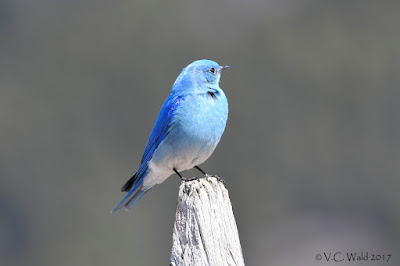