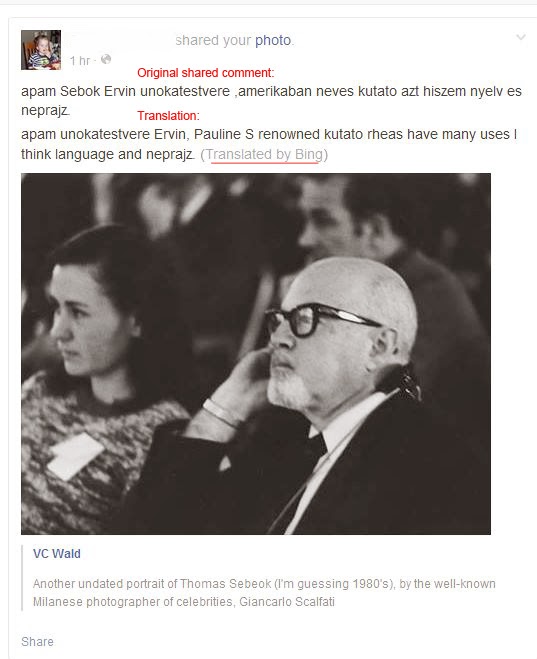 I posted to Facebook and shared with the Hungarian side of my family the above photo (yes, I admit, I use Facebook, it's a fine tool for keeping track of the relatives who use it) and my cousin in turn shared it with others, adding her own commentary in Hungarian. Upon request, Facebook will translate a post that is not in English (or whatever the original language of a post happens to be). Click on the image to reveal the fine translation from Hungarian to ? that Bing did!

Bing is a Google search engine. It should just stick to searches.
Posted by Veronica Wald at 3:02 PM No comments:

We finished a lovely hike to Fairy Falls (crowned by a mad dash over the last 200 yards, caught in one of those only-in-Yellowstone soaking "snhail-storms" that come out of nowhere followed by blue skies within minutes, like it never happened), made our stop at Old Faithful village for a tall icy drink, then were on our way south seeking a dinner venue. Before long we crossed the bridge over the Firehole River to behold (drum roll) another bear jam! This was the area about which Janet Chapple, author of  the A+ guide, Yellowstone Treasures, says, "Prior to 1970, the area near the pond south of the bridge was the site of a bear feeding grounds, called The Bears Playground." 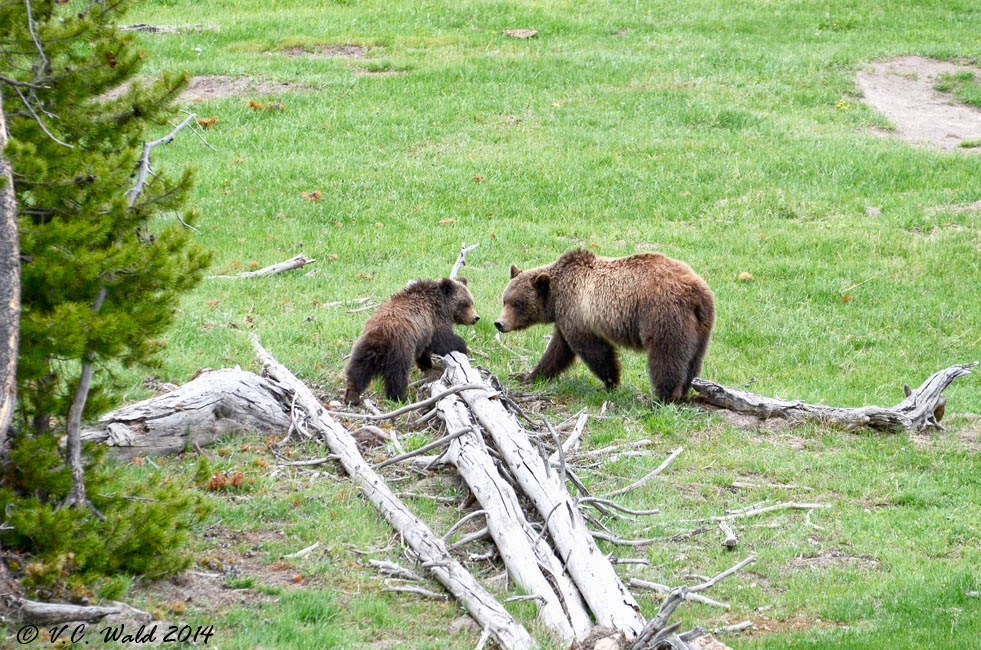 There, below the road, were another grizzly sow, strongly resembling 399, and her one year-old cub  doing their sweet bear thing. 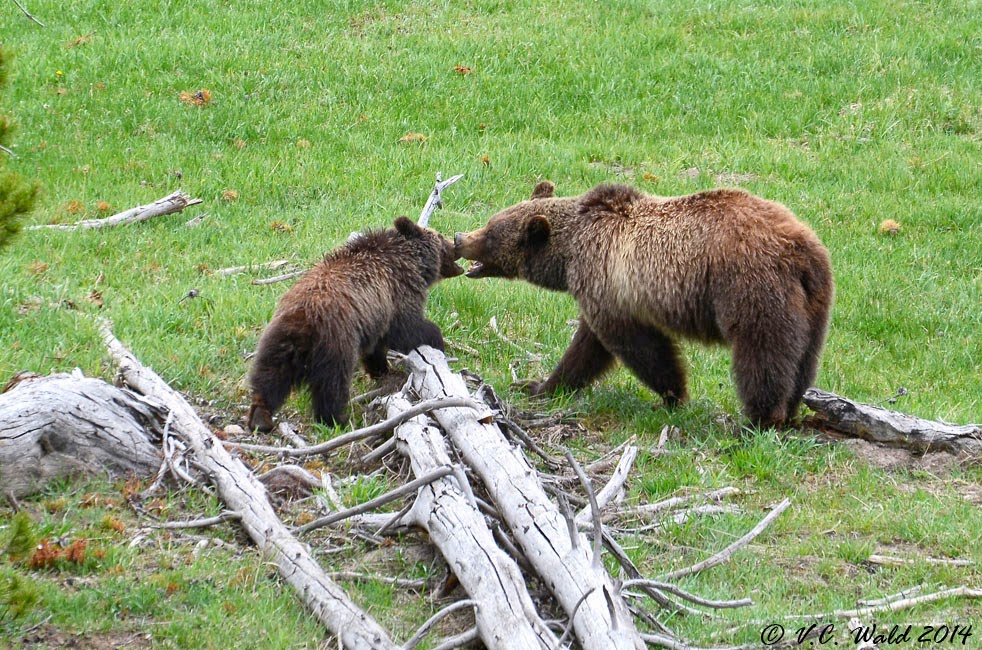 They nuzzled and seemingly cooed affectionately for a minute. 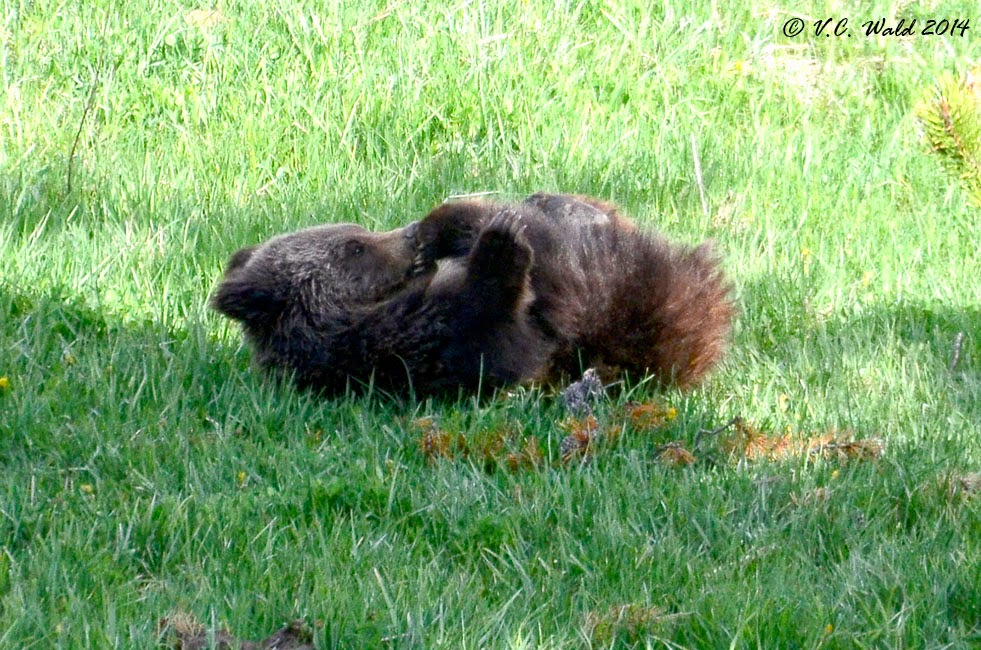 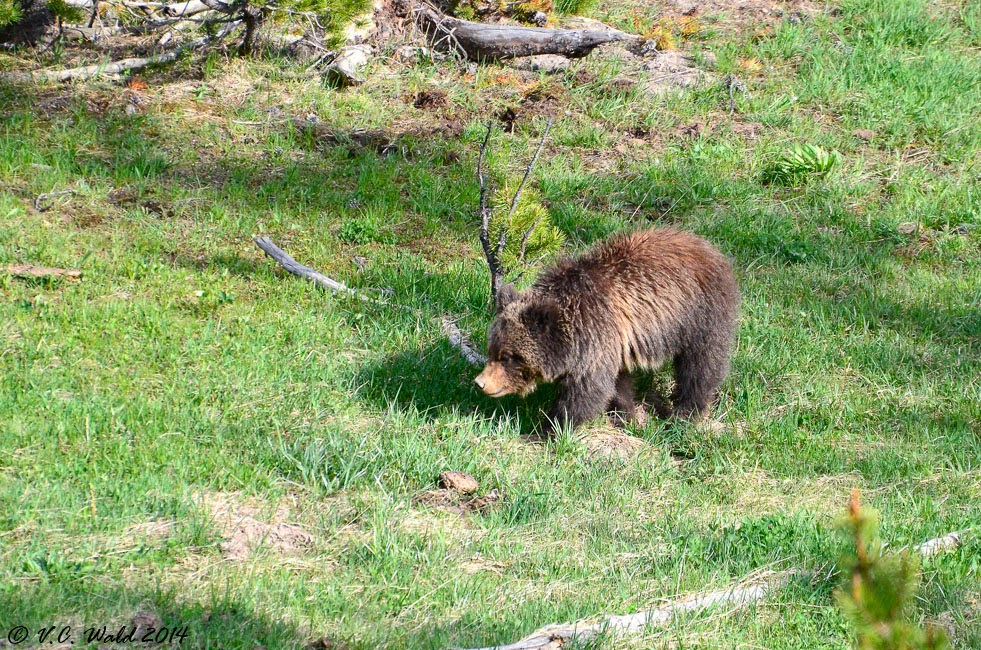 All bears do not look alike, even to the unpracticed eye. Note the difference in this cub's facial profile compared to 399's one-year olds (who look more like each other than they do this little guy).
Firehole Bridge Baby's build is more childish too. 399's cubs are comparatively long in limb and body. But if not precisely the same age, they're certainly the same 2013 cohort.


Although the crowd on the roadside well above the bears was respectfully quiet and not causing the rangers or the bears much of a headache, Momma Bear decided it was time to move along, and led her playful child to the bank of the snow-swollen Firehole River. 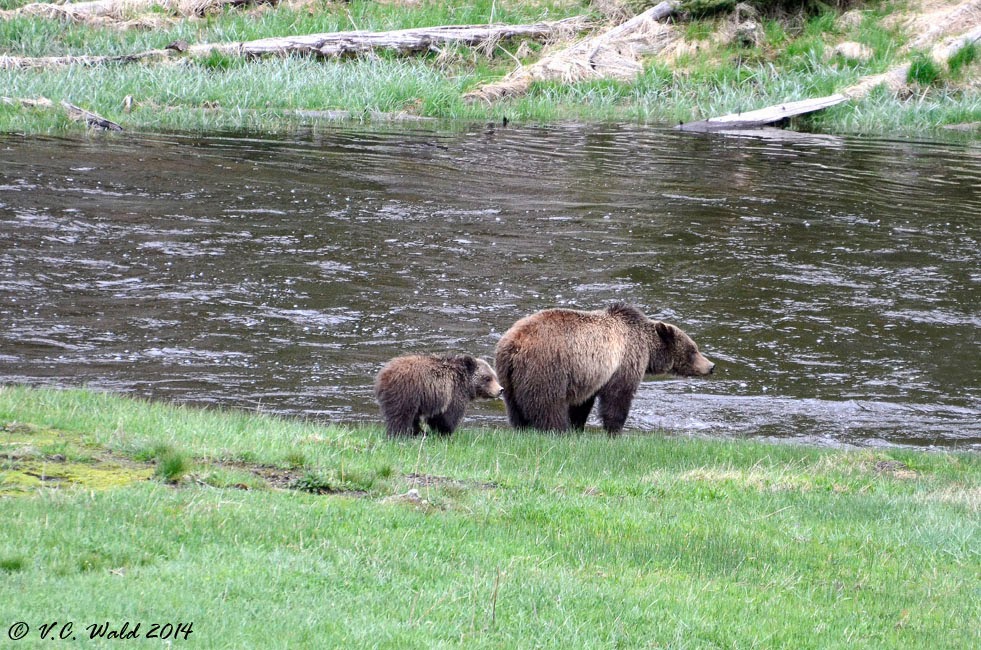 Even a full-grown grizzly looks small swimming across a snow-melt swollen river. No wonder the cub lingered on the bank, hesitant to follow. 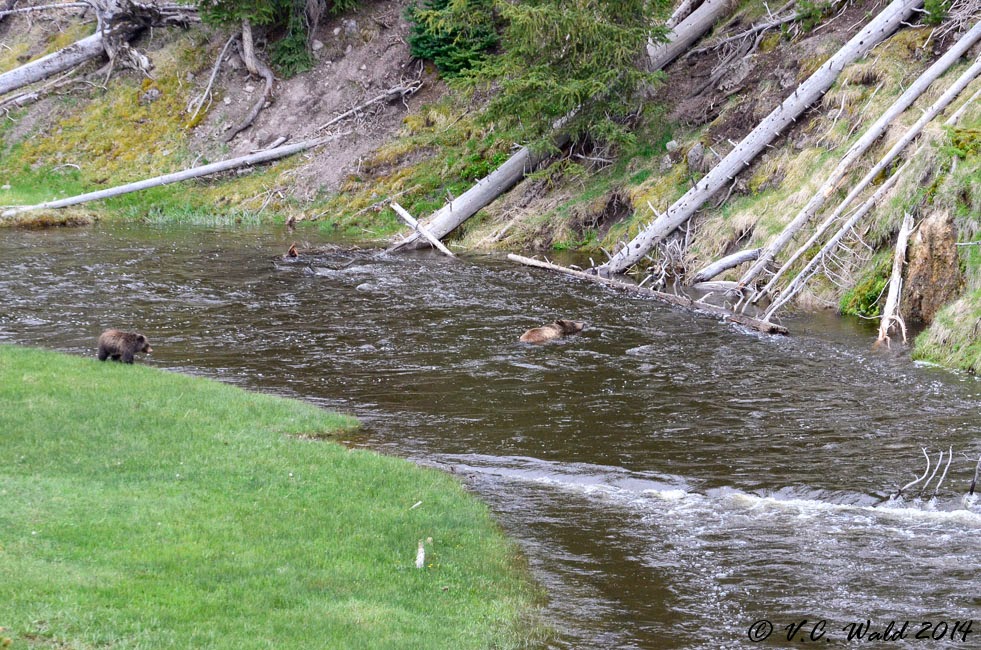 You can do it, Baby, you can do it!
I and many others have observed that some wild parents seem to have dangerous lack of sense about whether their babies are strong enough to do things like cross rivers -- several of us on different occasions have witnessed moose mothers cross big rivers leaving their trembling, terrified calves stranded, not uncommonly with dire outcomes. Bears, on the other hand, are better equipped to understand their cub's capabilities, and to launch a rescue when needed. 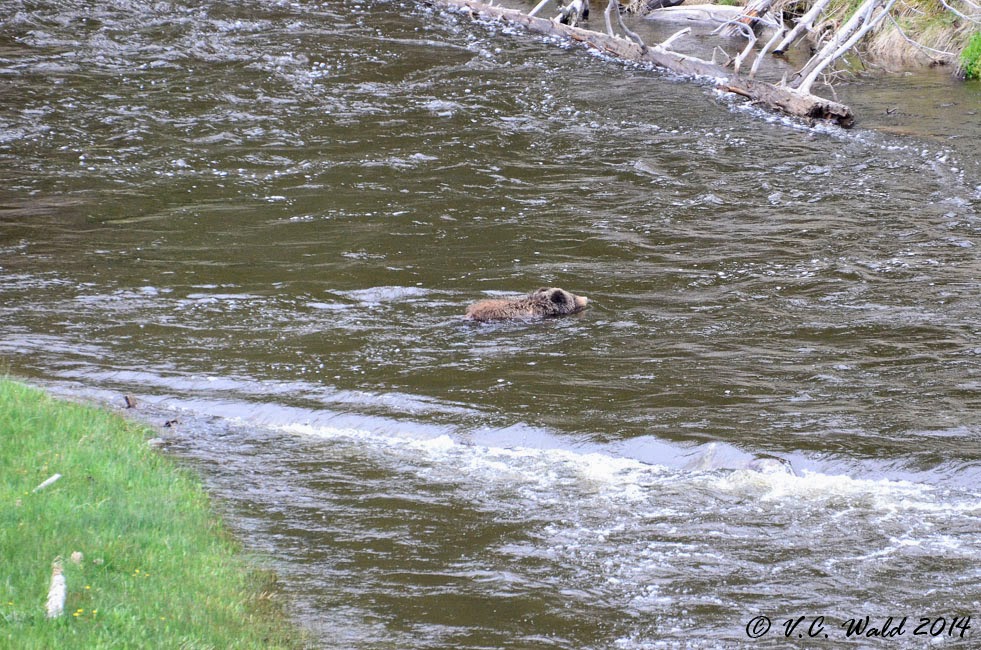 While no rescue was required, the challenge wasn't yet over...the exit ramp was extraordinarily steep. Just a reminder that not much creates a barrier for determined grizzly bears. 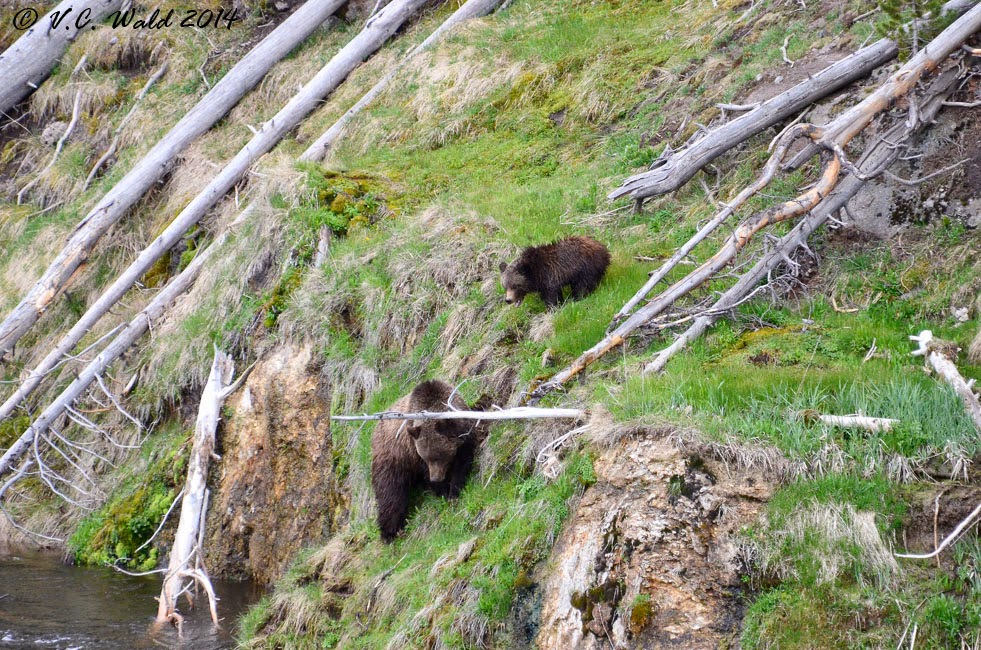 Once last glance between us. Is there anything as sweet as a freshly washed grizzly cub? Then it was up and over into the safe privacy of the woods for bears, and on to a good dinner and charming recollections for us. 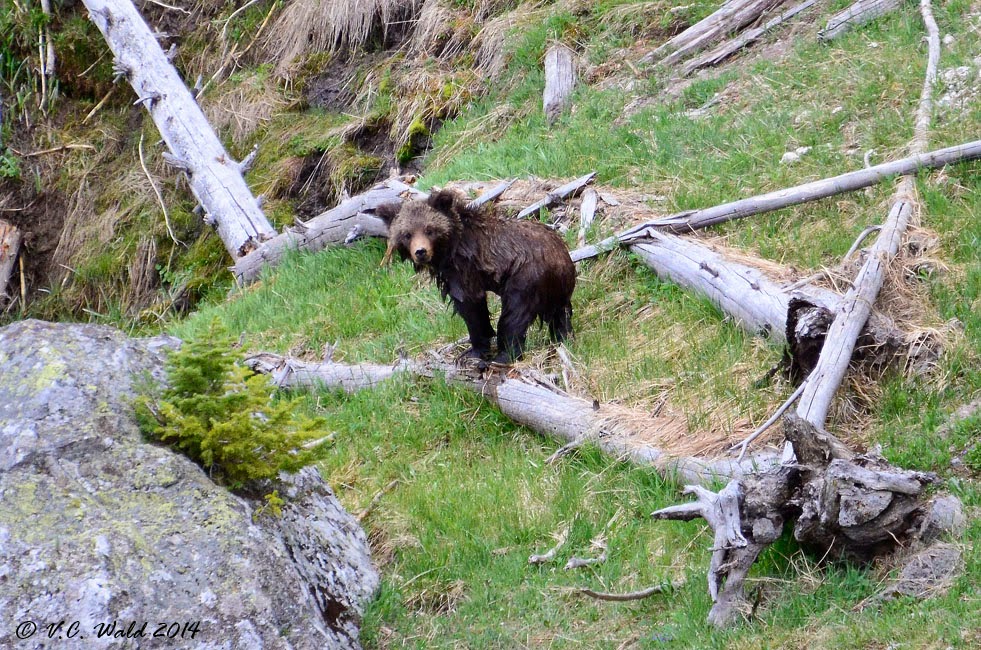