Why wait, Shakira? (turn up your sound)

I follow some popular music (mostly "dance" music) through my Jazzercise class, and I admit, I have always loved pop with strong, driving rhythms, and even better, good lyrics. I only recently discovered Shakira's brilliant 2009 hit, "Why Wait for Later," but I can vouch it's terrific to move to. Blaring out of my Jazzercise instructor's boom box it's not possible to figure out what the words are, but I was instantly fascinated by the use of Middle-Eastern harmonies, riffs, winds and percussion. I thought, wow, here's a fantastic American-Latina artist brave enough to be influenced by a regional culture that is not so popular in this country now, beautiful and brilliant Shakira. I thought, maybe our more enlightened Middle-Eastern brethren will see this as an invitation to step onto the cultural bridge. Until I read the lyrics, which (not surprisingly) are deeply suggestive. No, not suggestive, let's face it, explicit, in a nice sexy way, perhaps not something most observant Muslims would be comfortable with. But I like it. Hey, "if there are no witnesses, there is no crime." You GO, Shakira!

Drowning in your sweat
'Til I drench my clothes
You've seen nothing yet
Wait 'til you let go.

Why wait for later?
Obey my intuition
We're going to be just fine
I've got a premonition.

One more
Night with you
I won't
Think it through
Time's golden
But you knew
Nothing in the world
You can think of
That I won't do to you.

I'm gonna dance through the veil of your eyes
While you follow my steps and decide
And I see your fate in the palm of your hand.

No one looks, no one hears us this time
It's only me and your conscience tonight
If there are no witnesses, there is no crime.

One more
Night with you
I won't
Think it through
Time's golden
But you knew
Nothing in the world
You can think of
That I won't do to you.
Posted by Veronica Wald at 7:03 PM No comments:

Rock art rocks -- and that's not all there is to it!

I've just returned from travels in the southwestern United States, where the opportunities to be inspired by, and learn from, the "things left behind" by peoples living in the area long ago are exceptional. As have peoples around the world ever since man became a tool-user, the early occupants of Arizona and New Mexico (and Utah, and Wyoming, and, and, and!) left their marks, literally, on the hard rock surfaces (that I imagine they trusted would be permanent) abundantly supplied by Mother Nature. They never fail to make me wonder: What is being depicted? What is its significance, its purpose? Whose privilege or duty, glory or penance, was it to make these marks? Were they intended to be things of beauty, or was that outcome just incidental, or are they simply meant to communicate the news (quite a few are now called "newspaper" rocks) in a pre-literate world? Maybe, most disappointingly, they are just Graffiti. Students of rock imagery have many hypotheses. Some are relatively easy to demonstrate today, as in the case of this (phenomenal, if you think about it) calendrical marking system found at the V-Bar-V Heritage Site, Coconino National Forest, central Arizona: 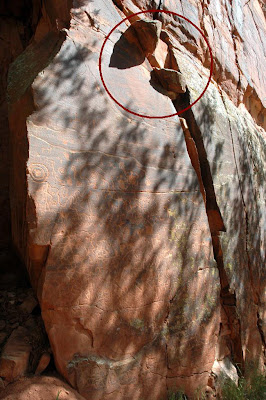 Observations have revealed to the patient and methodical that the circled rocks are wedged into the fissure in such a way that the sun casts shadows onto specific symbols etched into the rock, to the lower left (click photo to enlarge to see the details), to reliably  indicate the time to plant, and the time to harvest each year. The peoples who created this marvel were the Beaver Creek band of the Southern Sinagua (aka, Sinawa, as the Spanish concatenation of the words for "without" and "water" is typically pronounced), who occupied the region between about 1150 and 1400 A.D..
They used this same sheltered red rock face to depict other aspects of their world as well: 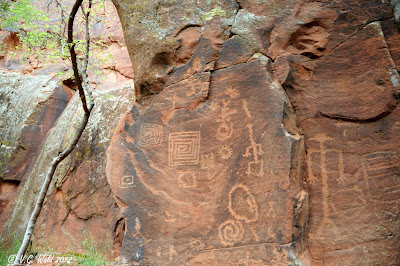 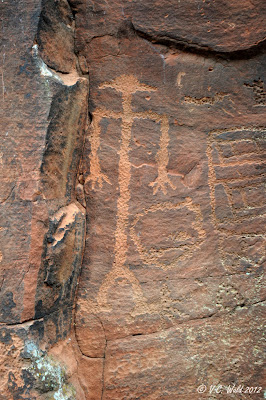 I'm not sure that its known what, or who, the splay-fingered, pointy-eared, long-torso'd figure represents. Fortunately, some images are more specifically grounded in a reality that we easily share today. This is a mountain lion, indicated by the long, curled tail, attacking the back of a deer or elk: 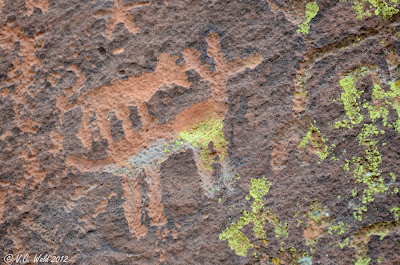 Rather than being pecked into the rock (which was surely tedious work) some images from related peoples of the same region were painted, most often with clay-based paints. These are referred to as pictographs: 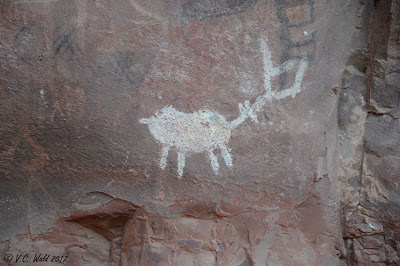 This image of a deer or elk is preserved at nearby Palatki Heritage Site, also managed by the Coconino National Forest. Some of the other markings around it were left by previous and subsequent waves of residents and visitors. Palatki has one particular special panel of images, also originally white-clay wash, but blackened by the smoke from the agave roasting pit on the floor below the cliff overhang: 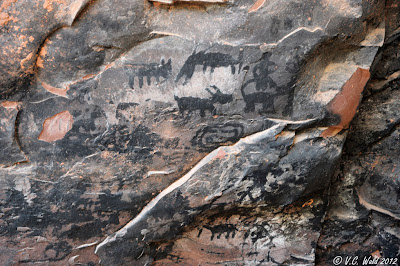 This panel includes at least one human figure. The docent at Palatki said it is believed to be a female giving birth, perhaps to the array of animals around her. In the lower left of another Palatki panel is this awesome figure: 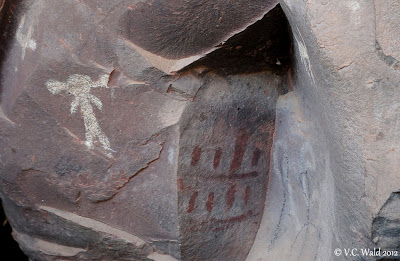 My traveling companion posited the hypothesis that this is a shaman with power to hear things others cannot. My theory is that it is an ancestress of the modern Hopi peoples of Northern Arizona, whose dramatic, scalp-ripping traditional hair style for maidens is this:
The Sinawa are, in fact, believed to be the ancestors of the modern Hopi people. 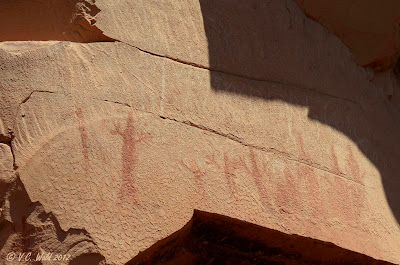 Even within small regions, styles seem to be particular to sites. This is another archaeological ruin within the Coconino National Forest, the Honanki Heritage Site.  Honanki was also occupied by successions of people, so these particular images may not be contemporaneous with those at V-Bar-V and Palatki; they do look a little different. My impression is that the image below is a sun or moon, perhaps carefully positioned to mark a lunar or solar event. Whoever made it knew well how to create a good round circle, in any case. 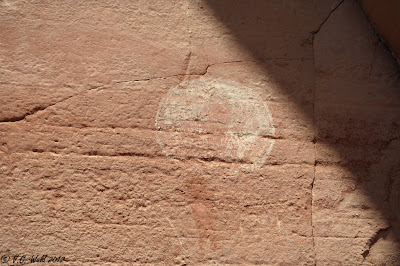 Of all these sites, Honanki is the most hard to access, thus offering the most privacy for vandals, I'm sorry to report. There's plenty of evidence they've taken advantage of the remoteness of the site. The compulsion to add one's own undistinguished mark over these irreplaceable images of the past is far beyond my comprehension, particularly using one's actual name! 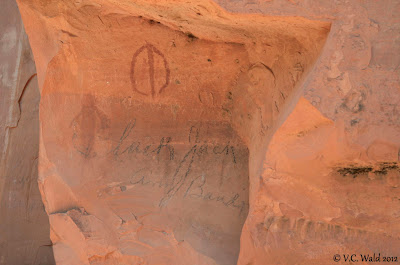 Below is another example, from V-Bar-V site, but at least it has the cachet of being fairly old; it probably dates to the era when the V-Bar-V was a working ranch. 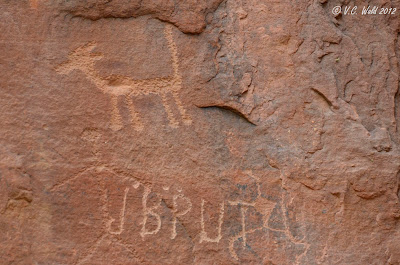 Petroglyphs and pictographs face natural threats as well. For example, changes in sun and shade patterns caused by the growth or removal of shade trees allows the appearance of destructive mosses and rock-eating lichen. Who knows how much has disappeared below that fluorescence of very recent vintage?
This is not a new problem, of course. It's even evident at some of these central Arizonan sites that successive waves of occupants altered what had been scratched, pecked, or painted before them.

Efforts at remediation are tricky. Sometimes the most that can be done is obliteration of modern man's efforts to compete for attention with the ancients. And we're getting better at that. In the insert photo below, which dates from about 1954, you can see above and to the left of the child's head, a clumsy effort to make something on this Newspaper Rock (in the Petrified Forest-Badlands National Park) disappear. In the contemporary photo (2011), two important things are evident: successful cosmetic surgery has been performed to repair the damage done by early efforts to remove damage, and, it is no longer possible to easily approach the rock face.
And by the way, if you guessed the identity of the little girl and that she grew up to take the 2011 photo with a long telephoto lens from a viewing promontory high above and a couple of hundred horizontal feet away from Newspaper Rock, yes, it is me.

Still silly busy, at work and at home, and one of the things that has distracted me from blogging is the creation and administration of a new Flickr group, Parkitecture: Unique Architecture of National Parks. As it's described:

The purpose of this group is to showcase and enjoy the rustic and romantic styles of architecture and decor used in or near national and other parks, monuments, and preserves around the United States and the rest of the world. Please limit postings to images that include man-made structures; interior and exterior shots are welcome.
Identify the park and the architect if you have that information.
Let's see your best shots of architecture that makes you WISH YOU WERE THERE!

There are myriad examples of fantastic parkitecture in America's parks, like this, architect Mary Jane Colter's 1932 Watchtower at Desert View, Grand Canyon: 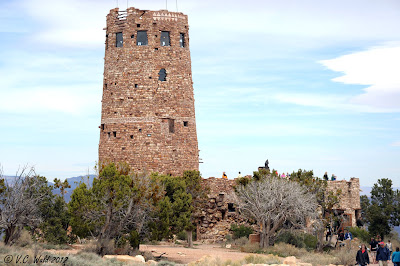 It is a highly evocative structure meticulously echoing the native construction and decorative styles  to be used both for 360 degree scenic viewing (the verge of the Grand Canyon is just beyond what you see here) and as, what else, an inspiring gift shop.  More about the amazing Mary Colter later...
As you might imagine, finding images of US landmarks is easy, I'd love to have many more photos of African, Australian and New Zealand, South American, Asian, Canadian, and any other rustic and romantic park structures!

If you have material that fits the theme, in its most broad definition, please add to the group! Your photos will have to be posted on Flickr, which will require you to open an account (free) if you don't already have one. Once you do that you can post your photos to any of numerous groups and appreciate the work of thousands of brilliant photographers.  In particular, I think you will enjoy the photos posted by the (already!) 54 members of Parkitecture!
Posted by Veronica Wald at 7:54 AM No comments: