So I can make plans

I hope you’ve been curious enough to click on John Maclean: FISHING, under “Check out these sites!” and within his richly interesting Web site, lucky enough to have come across his paean to his grandfather, the Reverend John Norman Maclean. The occasion of his memorial was the 100th anniversary of the Reverend’s pastorship of the First Presbyterian Church in Missoula, Montana. If you’ve read Norman Maclean’s A River Runs Through It, then you will understand at least a part of the significance of the elder Maclean’s arrival in Missoula.

The Reverend Maclean assumed his duties in 1909, just one year after my maternal grandfather undertook his own pivotal adventure that was to shape his life and that of his family. 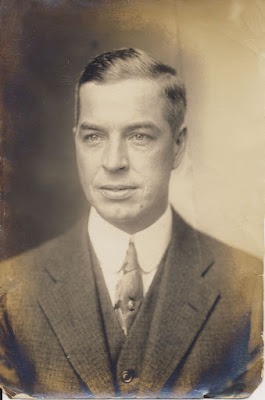 Charles Edwin Lawton was born in 1882 to Lewis and Ella Foley Lawton. He was one among seven boys and two girls raised in Chester, Pennsylvania. In the 1880s, his father worked as a weaver in a cotton mill, and his father, born in England, as a watchman. I am unable to reconstruct anything of my grandad’s education, though quite apparently he was bright, sociable, and a team player. As a side note, it is interesting that in this undated clipping, the younger men, apparently without careers of their own yet, are identified by their closest notable relative, in this case, my great uncle Harold Lawton, who worked for Sun Oil his entire career. And he was a member of St. Paul’s Episcopal Church of Chester. 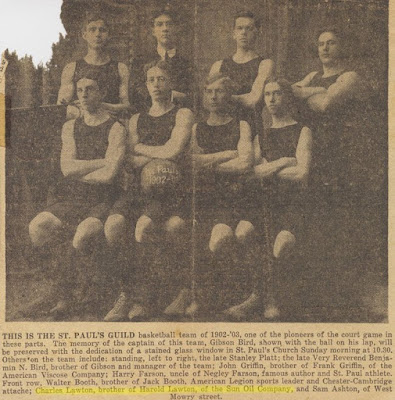 I catch the first official glimpse of Grandad in the 1900 U.S. census (most 1890 census records, including my family’s, were destroyed in a 1921 fire), just before the basketball team was featured in the paper. At the age of 18 he was still living with his natal family, and his occupation was already listed, propitiously, as “bank clerk.” 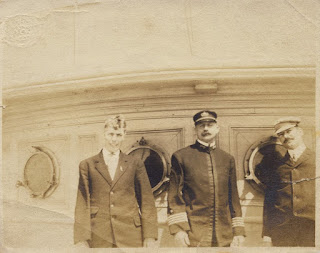 The next sighting was the crucial one: a photograph, marked in my mother’s handwriting, “Charles E. Lawton - left - on board ship to Puerto Rico 1908.”  He was by now employed by the American Colonial Bank and this could well have been his first journey to his important new assignment. I do not know if he was yet married to my grandmother, Mary Cullin, although he was 26 years old. I often wonder what he, and even more so, my young grandmother, felt about their exportation to such an exotic place, with its ruinous climate, foreign tongue, strange diseases, dark-skinned citizens, and alien foods and customs. These children of such plain upbringings are worthy of admiration for having the gumption to leave their families and raise their own 1,600 miles by slow boat away. 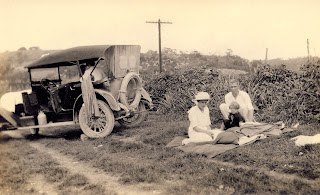 Charlie, as he was known, was first stationed in Arecibo, since 1963 the world-renowned home of the Arecibo Observatory. In those days, however, Arecibo was famous for its pineapple plantations. My mother, born in 1912, spoke often of her young life in rural Puerto Rico. The American Colonial Bank was heavily invested in the agricultural economy of Puerto Rico, which besides pineapple, thrived on sugar, coffee, tobacco, cocoanut, bananas, and other fruits of the earth.
It is clear from numerous family photos that my grandfather loved life in Puerto Rico.  Here he is on his favorite horse Colonel (from Arecibo days); there he is, with his wife and daughter and the extended family of friends and compatriots at a traditional Puerto Rican pig roast. Well, maybe not entirely traditional. I don’t know if Puerto Rican men typically wore suits and ties to the bar-b-ques, nor if the women all wore white. He fished and sailed Puerto Rico’s beautiful waters, and, it seems, was an admirer of Charlie Chaplin. 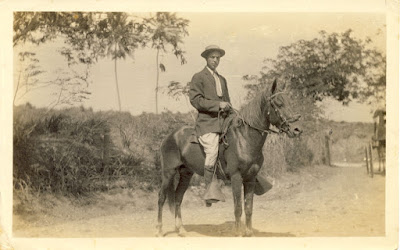 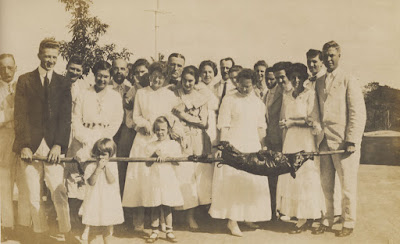 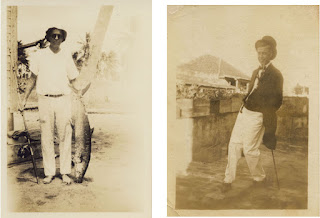 In a February 28, 1968 the (probably Chester) “Daily Times” retold in the felicitous style of 1918…
“Do you remember when? 50 YEARS AGO – It will be pleasing to local friends and business associates to learn that Charles Lawton, son of Mr. and Mrs. Lewis C. Lawton of 206 East Twenty-third street, has been elected cashier and director of the American Colonial Bank of Peurto Rico [sic]. Mr. Lawton was formerly connected with the Delaware County Trust Company.
News announcing the advancement of the former Chester young man was received in this city yesterday in a letter written to his parents. In receiving the appointment of cashier, Mr. Lawton was advanced over the heads of five fellow employees which is evidence of his keen ability in the banking world 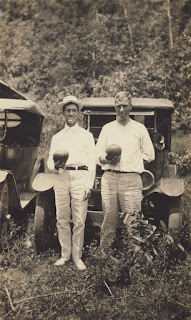 Herman L. Cochran [left in photo], formerly of this city, is now vice president in charge of the Peurto Rico [sic] interests of the banking company, Mr. Lawton has been associated with Mr. Cochran for the past several years. The new appointment makes Mr. Lawton second chief of the institution.
As testimonial to his ability and excellent citizenship an elaborate farewell banquet was tendered Mr. Lawton by the representative residents of Arecibo.
Approximately 60 people representing the different business establishments gathered about the festive board. The principal speaker was Attorney Palmer of Arecibo, who after telling of the accomplishments attained by the young banker of his home life and of his citizenship, presented him with a handsome gold watch inscribed with “Homage to Mr. Lawton, Arecibo, P.R, February 1918.”
This was the occasion of the family’s move to San Juan, by which time my mother was old enough to form many more clear memories. The family prospered there; in 1922 they built the house on Carrion’s Court that was my mother’s favorite home throughout her long life; a second daughter, Louise Edwina, had been born.

But things were to change; then, as now, economics were global. In September of 1931, my 19 year old mother was on a ship that would take her to New York, and from there, she went on to Massachusetts to attend Wellesley College. She treasured her year at Wellesley, participating as an alumna until she died nearly 75 years later.  But she was not to graduate from Wellesley; the family fortunes had begun to waver, Mother finished, well-educated nonetheless, at the far less costly University of Puerto Rico. In 1939, my grandfather made explicit in a letter to the New York Times the U.S. trade policies that adversely, and perversely, affected Puerto Rican commerce.

Through these years, details of my grandfather’s life are hard to nail down. The bank changed hands in 1930, his and the family’s ride became rougher. All I can document is that by 1942, he was working as a U.S. postal censor. My grandmother was apparently still in Puerto Rico, as was my 22 year old mother, also working as a censor.
By 1947, my mother was married to my father and living stateside. Around that time, my grandmother also moved back to the United States, where it seems she was awaiting Grandad.  In 1948, she received this letter, dated January 8:
Dear Mother [as he called her],
This will not be very long but so you will know how things are going. I have not been able to go to the SS Comp [?] this week, since Sunday I have had what the doctors call “undulating fever” it is like the “intermittent” we used to have but it seems something new in P.R. I have holed up in this case but hope by tomorrow to be able to get out at least to get some soup. I had to get something last night to put on the sweater sent me. ate  3 soft boiled eggs, toast and coffee got back here about 7:30 & in a short time proceeded to heave and heave the food in the toilet.
Today have not left the room. This damned fever taken the strength out of the legs & I have stuck here I don’t know if I will try and get out tonight to at least get a little something.
Answering the question of suits & overcoat. I was able to pick up a very good suit and overcoat this [illegible] when shock our passage morning. If your idea was for you to buy these & have them in the office of the S.S. Comp in [illegible] I know, due to my condition, I will need something heavy on the ship and that is why I got them so if you want to send down the cash it will expedite my trip. I have to get [back to] the cold before I will be right again. This damn fever and the cold sweating chills have about knocked me for a loop. I am still losing weight. am down to about 156 lbs from 190 to 195.
Had a beautiful letter from Eleanor [my mother]. A sarcastic one from you, and a damned unpleasant one signed by my father but written by Stan. Lovely holiday what can a fellow do.
Can’t finish this now will try a little later when the fever abates a little
Well another plane went down in Georgia with a bunch of P.R. people on it dead and wounded. Last night a two passenger plane dropped near the mouth of the bay but both people were saved and plane lost.
I received the packages from [illegible] and 18th Street [an apparent reference to the house where Granny was living, with her sister Catharine, at the time]. Please thank them for me. I will try and do it when I get North if I am not taken up in a box.
Love
Charles
Please answer at once so I can make plans.
A matter of days later, he was “taken up in a box.” The maid in San Juan’s Hotel Central, where he had been living until he could repatriate, found his body the morning of
the 11th of January, 1948, just short of his 66th birthday. 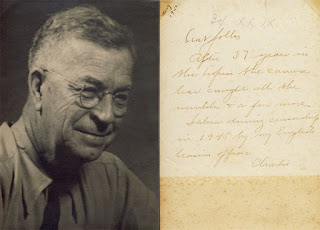 "Dear Folks, After 37 years in the tropics the camera has caught all the wrinkles & a few more. Taken during censorship in 1945 by my English liaison officer. Charlie." 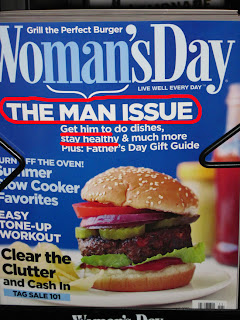 Snapped while in line at the grocery today: Woman's Day} THE MAN ISSUE.
I sure hope that man-pleasin' burger is an extra-lean, no mayo turkey burger, with a nice, low-glycemic index, high fiber bun...
Posted by Veronica Wald at 2:54 PM 3 comments:

What if BP channeled all the money it is now going to have to spend to clean up the Gulf coast - whether half-way successfully or not remains to be seen - toward developing clean, sustainable energy sources?
Mr. Obama, if we ban or rigidly restrict off-shore drilling in the Gulf of Mexico, BP and other petroleum energy companies would be forced to invest in the rapid development of alternative, more desirable and acceptable energy sources. Please think about it!
Posted by Veronica Wald at 8:55 PM No comments: 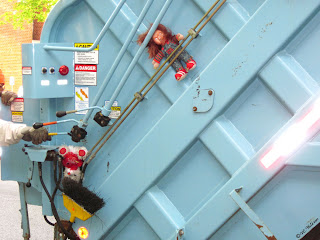 Saved from the dump by the not humorless, not unfeeling, street trash crew:
One Chucky doll, and one chucked Valentine Teddy bear (albeit upside down).
Posted by Veronica Wald at 6:54 AM 1 comment: