Swirling down a black hole... 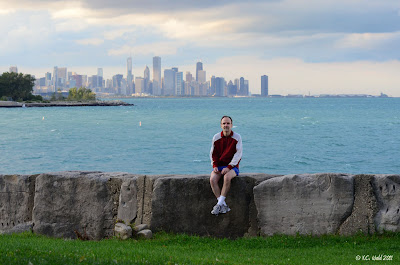 Working very hard night and day on a big grant proposal -- by this weekend it'll be as good as it's ever going to be and out the door. Then I will return to my normal routine, including posting a blog now and then, even better, having time to read favorite blogs of others! (I miss keeping up with ya'll!) But meanwhile I do have a new camera and lens, and took a brief walk out to Promontory Point, a little spit of parkland that sticks out into Lake Michigan just at the latitude where I live. Here's KLK (dressed for jogging, not for fall weather) enjoying an autumnal late afternoon, the City of Chicago beyond. I have also taken time to notice that leaves are changing--how could all that be happening with me too busy to notice? Fall is my favorite season, I'm so glad it's here again!
Posted by Veronica Wald at 8:44 PM 3 comments:

I adore you Adorama, but...

...I had a few camera supplies to buy, including lens cleaning tissue, so I checked the big two or three on-line sites for cameras and photo supplies. The cheapest on Adorama's website was this 99ȼ packet. But before plunking down 99ȼ, though, I wanted to know what I was getting for the money. A reasonable question, and I took advantage of an "Ask a Question" button that took me to a form into which I could insert my question, which was: "How many sheets per pack?" I assumed someone at Adorama would respond, but over the next three or four days, this is what my question yielded in my email box:

You asked: How many sheets per pack?
DENNIS S: I didn't count them, I guess around 40.

You asked: How many sheets per pack?
STEVE B: Hi - I'm not sure how many sheets were in the pack. I've used some; there are still about 40, so I'm guessing there were 50 sheets. Not much help.
It's a small pack that fits neatly into my pack, which is why I bought it.

You asked: How many sheets per pack?
KEVIN F: There are 50 sheets per pack, I'd buy more than one pack though and its a great price. Just buy some other stuff since you're paying shipping, like lens solution.

As far as I can tell, these are all from other customers whose attention was somehow brought to my question, not from Adorama customer service staff, who might have been expected to have the answer, or at least, to answer consistently. 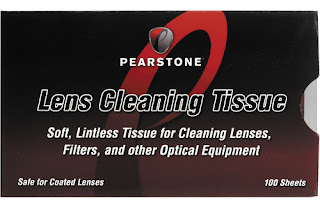 Since all those "helpful" answers weren't forthcoming immediately, and I found all the things I was shopping for at Adorama's biggest competitor B&H, I ended up buying a pack of 100 sheets (clearly marked), plus all the other items on my list, from them instead. I paid more than 99, but at least I knew what I was getting.

The other day I had a rare few moments to descend four stairs from the sidewalk down into one of my neighborhood (Hyde Park, Chicago) icons, 57th Street Books, a local branch of the Seminary Coop Bookstore, and a semi-subterranean candy store for bibliophiles.  I not only like the books, ample selection of sophisticated magazines (Nature, Science, Economics, many other more or less well-known titles in science, nature, literature and the arts) and classy note cards, but also the blank books, journals and calendars, and especially, the address books, where I focused my attention that day. What went through my mind was the happy question, “could it be time to buy a new address book?” since for some reason I’m not only very picky about my address books, but, also, very fond of the ones finally choose. Acquiring an especially nice new one is a treat.
There have also been times–most likely at the approach of holiday card season, since I otherwise hardly write old-fashioned letters any more–when I’ve thumbed through whatever address book I had at the time and noticed how many people have moved or passed away since the book was new.
When I do that and decide it's time to start afresh, the other thing I do–neither conscientiously nor even consciously in the early years–is save my address books. This has proved to be invaluable as I try to reconstruct past times, places, and people, and especially during the several months I devoted to writing my (currently languishing) life story. While I can’t date them, I can order them by who is in them and who is not. 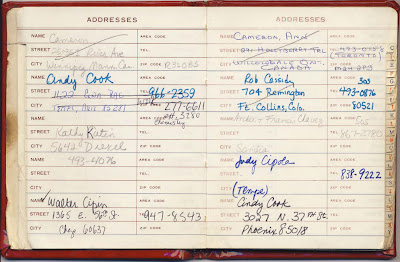 The oldest one I have, from all the evidence within, was acquired during my college years. I certainly had it during grad school, given all the Arizona addresses in it. I then got a new one around the time I met my (now ex-) husband, because his family and friends, some in his handwriting, show up. The next one after that has all of those people and many more, and survived my divorce and early acquaintance with KLK because he, but not his family, are there. 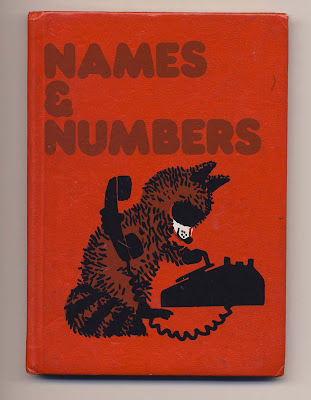 After a while it too got filled with too many cross-outs and sad reminders of those gone before us, and arrows to the next blank page for my mobile friends’ next, and then their next, addresses. Another one, the “Victoria and Albert Museum CATS Address Book” has KLK's family and friends plus all of mine. It too was eventually filled up and I went on to the next, and the next. 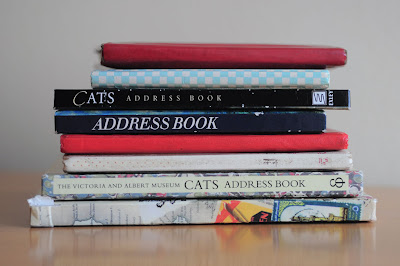 There are eight oldies altogether, plus my current fun Nancy Drew Address Book: Nancy’s Mysterious Letter, in which each alphabetic division is named for an appropriate Nancy Drew book: “G” for The Secret of the Golden Pavilion, and “S” for The Secret of Shadow Ranch, and so on.  The illustrations are picked from the earliest editions–those are the ones most familiar and pleasing to me–and what I consider to be undistinguished and generic latter day editions. No mind, I still love it. 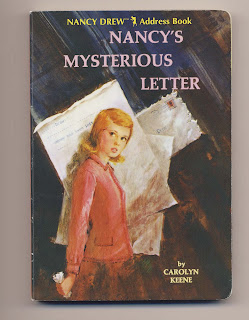 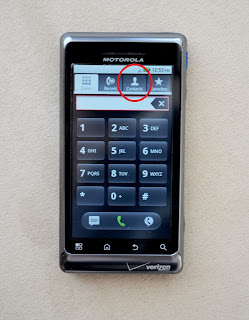 (Regular readers might note the irony of this.)
Sigh...
Posted by Veronica Wald at 2:20 PM 3 comments: