The North Country is dog country, and working dog country at that. The archaeological and historical records show that native peoples of the circum-arctic region - Canada, the U.S. (Alaska), Russia, Norway, Greenland - have used dogs as beasts of burden, to pull sleds, and as vital collaborators in the hunt (bears, seals, muskox) for at least two millennia. Their ancestors are known to have brought the progenitors of the modern arctic dogs with them on their migrations from Asia to North America thousands of years ago.

Americans are familiar with the most refined breeds of sled dogs in which specific features such as size and weight, stance, fur type, coloration, and conformation, consistently meet defined standards. These include the Siberian husky and the Alaskan malamute, both of which are most commonly kept as house pets, although they can and do work in harness as well. But as usual, what we think we know about something, we don't really. On this November trip we received an introductory education to the complex world of sled (or sledge) dogs, as understood by the people of Churchill. No visit to Churchill is complete without it.

There are two major "camps" of sled dog breeders/ keepers in Churchill. The first is comprised of traditional mushers, that is, people who hitch dogs to sleds for transportation, recreation, and for competition, such as that spectacular test of canine and hominid endurance, Alaska's nearly 1,050 mile Iditarod race, or, in Churchill's case, the 220 mile  Hudson Bay Quest. In Churchill, we were treated to a visit to Wapusk Adventures, hosted by its bigger-than-life founder and owner, Dave Daley. Musher Daley clearly is committed to educating visitors to the world of Canadian sled dogs, which, as far as I can tell, is a catch-all term that refers to dogs that are long-legged, lean running machines. Although they live their lives outdoors (except for the shelter of plywood houses, door lee to the wind, with a pile of insulating straw bedding), they are carefully socialized to people. And Dave Daley makes sure his dogs know he is their alpha, their leader, their security, their feeder, and their source of joy in life. Daley keeps a kennel of maybe 40 dogs, and breeds them to produce only the occasional litter to assure that as his older dogs retire their replacements are trained, conditioned and ready to go. Here are some pups from the 2012 litter, kenneled at the visitor center, eager and available for pats and "conversation" with friends and strangers alike: 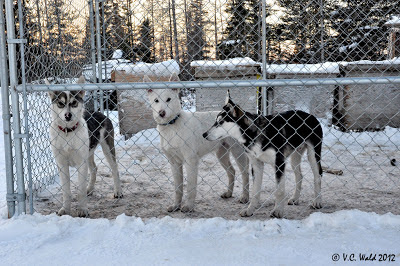 This is where the adults spend their non-working hours: 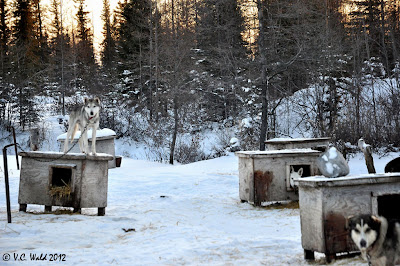 But as soon as the tourist bus pulls up, all are on alert. They are hoping, hope against hope, that it will be their turn to pull a musher (driver) and two riders for an all-too-quick spin through the forest path. When the harnesses come out, they start to bark and yowl, begging to be chosen for the job! 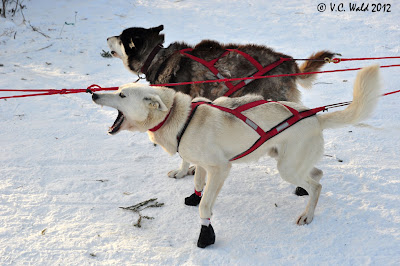 That wide mouth and show of teeth and the loud barks and yelps you can imagine to mean, "I can't wait to get running!" This particular dog was so funny, with his little boots. He must have been sore of foot, but a back bootie fell off early in the game and he ran all his circuits with just three, with no hint of lameness. 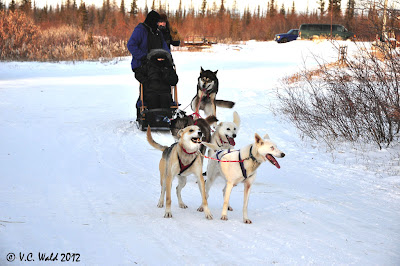 I love the guy in the back there, with so much enthusiasm that as long as he can't move forward, he will move upward!
Here's what the rig looks like: one tourist seated, one standing, and a spot in back for the musher to stand (not visible in this photo): 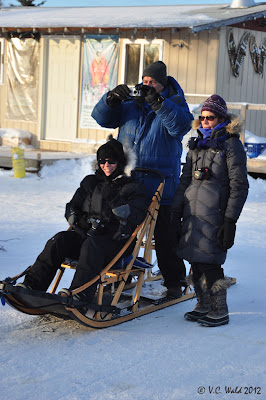 Video © K.L. Kuehnel
And they're off! It's amply clear the dogs live for this moment. The sensation is that they reach top speed - let's say, 3 to 4 miles per hour - as soon as the musher lets off the brake. Then the only sound is the sled's runners on the hard-packed snow and the occasional soft patting of the dogs' feet (the camera's microphone exaggerates the sound of the wind). It's very interesting to ride behind them and see how each animal has its distinct gait, pull-strength, and level of concentration - that's how a good musher like Dave Daley knows how to position his dogs - lead, swing dog, wheel dog, etc. - for the best speed, control, and peaceful achievement of distance. 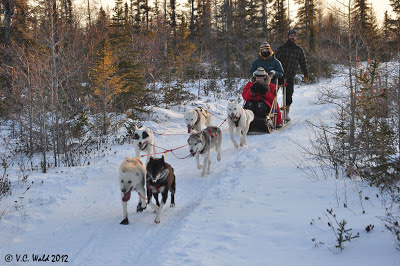 And here they come, having completed a bracing turn through the woods with their thrilled guests in tow. The cold was unnoticeable in that late afternoon light and peerless fresh air, steadily sailing along behind these fulfilled athletes. Dog-sledding now ranks high on my list of life's great pleasures.
The Canadian Eskimo dog, unlike the more common Canadian sled dogs that look like their genetic heritage might be a bit helter-skelter, is recognized by the Canadian Kennel Club as an endangered breed. 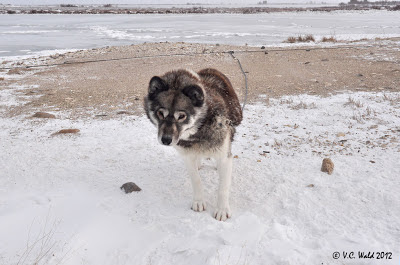 The long history of this rugged indigenous dog, so closely intertwined with that of the Inuit peoples, came perilously close to an end in the 1970's as the Inuit adopted mechanized means of transport like snow-mobiles and ATVs, removing the motivation to keep dogs - the Canadian Eskimo's metabolism is that of a pure carnivore, and in that sense it expensively competes with people for sources of quality protein and fat. Various organizations and individuals around Canada still breed the dog to keep it from the brink of extinction, and among them, the most well-known and controversial by far is Churchill's Brian Ladoon. Ladoon virtually single-handedly represents the second "camp" of dog breeders in Churchill.

Ladoon's dogs are particularly famous because they are "tied down" - that is, each on a 15 or so foot chain tethered to long cable anchored in the ground, Inuit-style - in prime polar bear country.  Photographer par excellence Norbert Rosing happened to witness and document the apparently remarkable interactions between the restrained dogs and bears awaiting freeze-up on Hudson Bay. Rosing's images show what, to all appearances, is affectionate play among bears and dogs, and the behavior has been observed regularly since. (Follow the link to see Rosing's photos; the images below are all mine.) As far as I can determine, from a scientific standpoint the behavior remains poorly understood.


Not everyone believes these interactions are so charmingly innocent, however. Ladoon, whose very large pack of dogs has to be fed meat, profits from charging delighted visitors to enter the dog's unfenced compound. He has often been accused of baiting the bears by over-feeding the dogs, thus attracting more visitors hoping to see the bears romping and snuggling with their canine pals. The leftover food would of course attract the fasting bears, which, apparently satisfied with the meat, do not kill/eat the dogs. At least they don't usually kill the dogs; in fact, several fatal bear-dog interactions, whether intentional or accidental on the part of the bears, have been documented to occur each year. Ladoon blames this on the interference of wildlife managers that have removed the bears because of their habituation, which in turn makes room for aggressive bears to enter the area and kill the dogs. 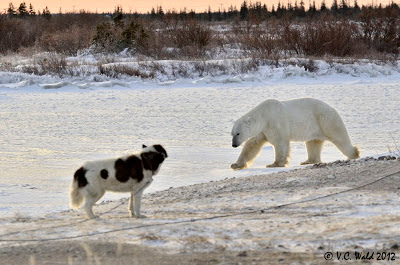 Unlike the sled dogs of Wapusk Adventures whose plywood houses are nestled in the windbreak of the forest, and where visitation by bears is vigorously discouraged, Ladoon's Inuit-style tie-down is on a highly exposed acre or two of tundra with no shelter what-so-ever, winter, spring, summer or fall. The tie-down is no where near Ladoon's home, nor that of anyone else, for that matter. What happens to the dogs out there happens, almost always, with no opportunity for human intervention.
Even if Ladoon's feeding practice is not in fact attracting polar bears, there is plenty more basis for concern. The Inuit didn't invite their dogs into their igloos when the daily highs fell below-zero and stayed there all winter long; hunkered down in the snow, the dogs were sufficiently protected by their fur and body fat, and Ladoon's dogs apparently are too. But nobody talks to winter tourists about what happens when the temperature stays above freezing, as it does in the subarctic summers. While in the winter, dog excrement quickly freezes and is in effect vaporized by the friction of the dogs' chains dragging across it, in summer, it seems likely the feces pile up and particularly attract the intense irruptions of biting flies the tundra is famous for.  Although each chained animal has a circle of about 30 feet in which to move around, it cannot be healthy for the dogs to be restrained in proximity to excrement, nor can it be humane to set up a situation in which they cannot escape hoards of biting insects. 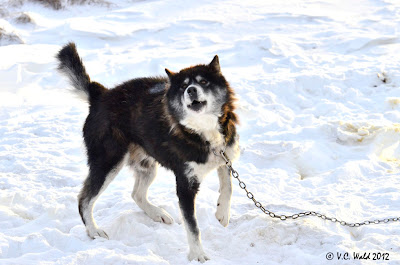 The internet is more than full of opinions about Ladoon: he's a saint who is saving a unique indigenous working dog, caring for them the way they were bred to live, he is misdirected and self-glorifying at the expense of his animals... But in my mind, what is incontestably egregious is not that the dogs are exposed to the elements (by far the most common complaint) - after all, they appear healthy and show a lively response to the presence of visitors - and bears - but the fact that they are never harnessed to sled. They are born and bred to work, but as far as I could determine, Ladoon's dogs never get beyond the small circles to which they are chained. This seems to me to be the ultimate justification for revoking Ladoon's license - which, by the way, is not official, but at the behest of Churchill's leadership, which doubtless has its reasons for supporting tourist attractions and local business. I was also given to understand that Ladoon does not readily give or sell his dogs to others who might harness and run them - it appears that he in essence hoards them in the name of saving the breed.

If you know, or feel, differently about Ladoon's or Daley's dogs, kindly comment, as my opinions are formed on the basis of limited personal experience and a great deal of third-party opinion, which is consistent only in that it is inconsistent.