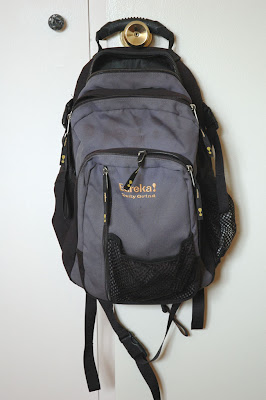 Smelly, (very) dirty, empty, worn out...farewell, old friend. We saw lots and lots of miles and fun together. Your replacement looks really clean, doesn't stink, holds lots of stuff (as did you) and has bells, whistles, and many, many pockets that I haven't figured out how best to fill. I like it, but I'll definitely miss you!


Posted by Veronica Wald at 5:46 PM No comments: 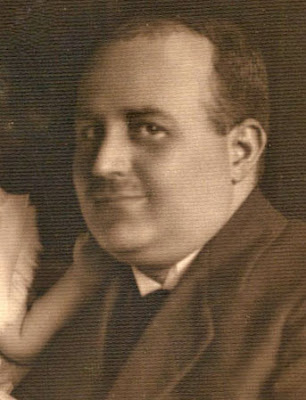 Composing my life story (a long-term project of mine) has sometimes had the feel of writing my own obituary, and as it turns out, there is a family history of doing just that. My paternal grandfather placed his own obituary in a Budapest newspaper, for what might be apocryphal reasons, according to family lore. I’ve heard several versions: to see what his friends’ reactions would be; to help him dip below the radar following some less-than-wholesome money-getting activities; as a prank. As my cousin LP, whose uncle my grandfather was, says affectionately, “his reputation was rather questionable.”

My father’s father was a Hungarian Jew, born Sommer Dezső in Budapest in January of 1891 to Albert and Janka Sommer; he went by an assortment of first and last names throughout his lifetime. He had changed the German-sounding Sommer to Sebeők (pronounced approximately SHEH-bek, meaning “Sebastian” in Hungarian) by the time he was an adult. After Grandfather came to the U.S. in 1936, he used more alternate names, and eventually adopted the apparently manufactured last name Shybekay.* In fact he published 15 or more works in English, under the name of Derso Sebeok Shybekay. I think Derso is how his Hungarian given name, Dezső, looked when he wrote it, and I would guess Americans found it easy to pronounce. 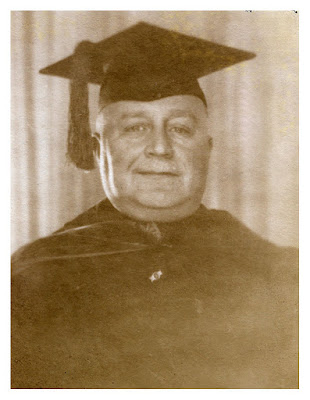 He practiced law in Hungary, even serving briefly as a judge, and wrote on the legal status of Hungarian Jews. He brought my father, his only child, then 16, to the United States to attend college at the University of Chicago, and went on to remarry (again unhappily) after divorcing my grandmother, and to make a life for himself as an industrial, or organizational engineer. He continued writing, self-publishing such fascinating works as “Motion and Time Study: Time Standards.” He was also regularly quoted in the press, where he was variously identified as the president of the National Council of Industrial and Professional Engineers (New York Times, 1949) and the president of the Industrial Research Council of America (Chicago Daily Tribune, 1950). Either these organizations left no trace, or possibly they were of his own manufacture. He also at times identified himself as an editor, though LP and I have not yet figured out what, exactly, he might have been editor of. 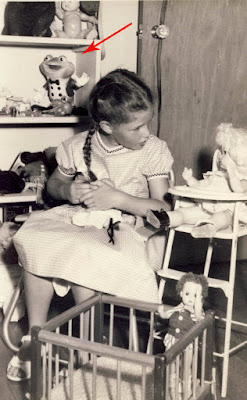 My grandfather, who I believe never laid eyes on me, died when I was a very small child. I remember knowing only two things about him. First, he gave me, his “only one beloved grandchild,” two large and two small green rubber frogs, dressed in vests with big black buttons, riding coats and tails, standing upright, arms akimbo, large smiles on their friendly, toothless faces. The two big ones squealed out of a metal-ringed hole in one of their over-sized black-shod feet when squeezed. I never understood why the little ones didn’t also have nice noise-makers, but they were silent. Looking back on it, I’m a little surprised I liked them as much as I did. At least one specimen lasted into the final quarter of the 20th century, but the last time I looked into The Trunk of Childhood Treasures, there weren’t any frogs in there anymore. I suppose their rubber flesh got sticky and discorporated somewhere along the line. The other thing I distinctly remember was that my father’s father had been diagnosed with diabetes. For a while there was a small blue pamphlet on the subject lying around the house, and I know he had to inject insulin. It’s not surprising that he died so young. 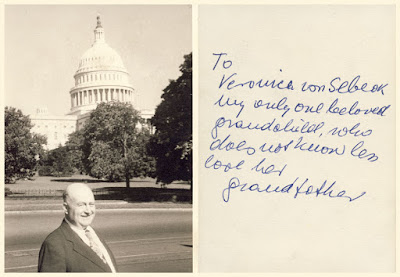 "To Veronica von Sebeok, My only one beloved grandchild,
who does not know hes [sic] love her. Grandfather"


I know in his last years he was living in Washington, D.C. and that he probably died in 1952. Where he (or his ashes) might be buried I can’t determine. My father, now also deceased, was never forthcoming about his father, in life or in death.

*It’s wonderful that he picked a truly unique name, greatly facilitating 21st century searches for whatever legacy he left beyond my own in this world. Gradually I'm piecing bits together; I just recently located more of his correspondence at the University of Minnesota, Minneapolis. I'm eagerly awaiting the public release of the 1940 U.S. Census (in 2012) where I'll likely catch yet another glimpse of him.

Who knew?
*AKA, John Cho
Posted by Veronica Wald at 8:15 AM No comments:

Turn on your sound 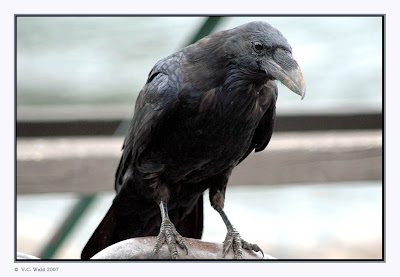 Tales of the Tacky 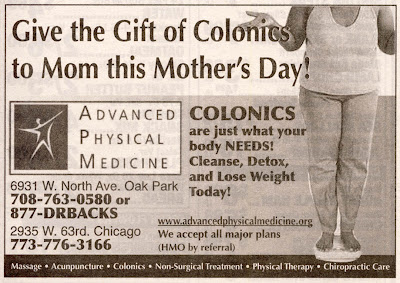 This left me speechless when I first saw it in our neighborhood newspaper, the Hyde Park Herald. I didn't know whether to laugh or cry. Now that I've had a few days to think about it, I think if anyone gave me a gift certificate for a high colonic, I would simply have to disown them.

My Mother's Day wish for you is that no one gives you a colonic cleansing this year.

Posted by Veronica Wald at 8:21 PM No comments:


Ever since I posted the photos of the squirrel I've been trying to think of what her eating method reminded me of; it finally came to me. She was just like this teletype machine, except she never paused to wait for more data to come across the wires.

Remember these things? Oh, and you must turn on sound for the full effect! (Not that the squirrel made quite that kind of racket, though red squirrels really can be noisy - they're real scolds.)
Posted by Veronica Wald at 9:19 PM 1 comment: