I spoke too soon

Today the Graduate School of Business (since renamed the Booth School of Business) got its first avian mortality of the spring of 2007. It looked like a wood thrush - it's hard to tell from beneath - along the south face of the glass tower. There was also a stunned little warbler on the east face. I believe it eventually recovered and flew off. Migration is really in full swing now, we can expect one, two, up to five or six deadly strikes per day until mid-summer. The bodies go to the Field Museum of Natural History for identification, sexing, determination of condition (e.g., body fat measurements), and correlation with weather conditions on the date of mortality. One way to salvage a bad situation.

Thanks to www.ChicagoGSB.edu for the interior shot of the glass tower. 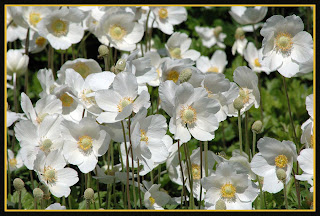 I'm alive - just too busy with projects, projects, projects to blog. So today I'm simply acknowledging that spring has truly arrived in Chicago.
And one further spring comment: unaccountably, since song bird migration is fully underway here, we have not had one single mortality from a window strike at the Chicago Graduate School of Business where I work. This compares to dozens, if not more than a hundred, by this time in previous years.
Anemones from last spring, on the University of Chicago campus.
Posted by Veronica Wald at 8:50 AM 3 comments: 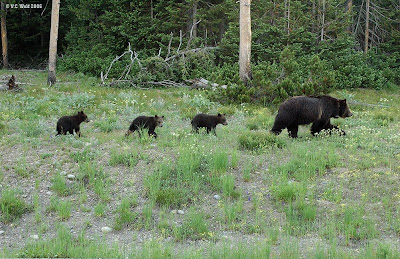 I found out today that all three grizzly cubs survived their first winter and are out and visible in Grand Teton National Park. Here are my notes from the first time I saw them, June 13, 2006

"Then I went on up to Colter Bay and just before the turnoff – literally a hundred yards from the sign, SHE and her three clowns emerged. I was the first to see bear 399 (who is collared, said to be 10 years old, and to have lost her only previous cub, last year.) Of course I wasn’t the only one for long, but that early – it was about 6:40 – there aren’t a lot of people around. She led the kids southward along the embankment above the road for a bit, then crossed, then crossed back into the trees. What an absolute thrill, such a handsome dark chocolate bear. It’ll be a miracle if more than one cub survives two years, but right now the little boogers are quite the handful."

My emphasis on SHE refered to the fact that I had been in the park for several days and this bear and her cubs had been seen by literally hundreds of people, except me. I saw them once more, the following morning. But I never expected to hear that all three cub survived the winter - albeit a mild one. They are still at great risk, most especially from boar grizzlies, but at least the first great hurdle has been surmounted. In fact, it may very well be that the reason the sow stays in the vicinity of the road and human activity is that the adult males might be less inclined to bother her and her brood there.

God willing, they will still be around and visible when I get there again in June.

Posted by Veronica Wald at 6:18 PM No comments: 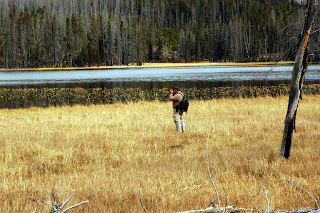 I am well into Doug Smith and Gary Ferguson’s wonderful Decade of the Wolf, the felicitously written, fascinating story of gray wolf reintroduction to the Greater Yellowstone ecosystem. I might add, one more reason the book is notable to me is that the cover photo was taken by my friend Doug Dance.

Completely coincidentally, today I came across an old e-mail I sent to a friend who lives close to Yellowstone National Park and spends several days a week there; he has also served as an interpretive ranger, providing him with the perspective of long experience. My message was in response to the announcement of the early February, 2004 death of one of the alpha female wolves (known only by her number, 42) originally introduced in 1995. The irony of my optimistic comments is that while in 2007 there are indeed “wolves to watch in Lamar” the peregrine falcons in Hyde Park (Chicago), where I live and work, have still not successfully fledged a single chick since 2002.

From early February, 2004, slightly edited for clarity:
“The strength of people’s reactions to 42’s death is amazing. I understand how people become so attached to wild animals they see over many seasons. Inadvisable though that is from the strictly intellectual standpoint, I’ve watched myself get that way about “my” peregrine falcons. We humans read doggie body language so readily, even the untrained and casual wolf-watcher can relate to what’s going on. I have a feeling there’s an evolutionary reason these things [i.e., rearrangement of pack membership and heirarchy] happen, and that the fears that the Druid pack will disintegrate and so on may be valid to the extent that new alliances can now form to keep the gene pool properly mixed up. I’m pretty sure there will always be wolves to watch in Lamar, though, or at least if there aren’t, it won’t be because of changes brought about by 42’s death.

But Mother Nature can be incredibly cruel. Watching a new moose calf stranded in the middle of a rushing river in the Tetons, knowing that it would soon collapse and be carried down stream to become fish food, and seeing a cow elk’s hopeless panic after a bear disappeared into the copse where her calf was hidden resounded with me for months afterwards. We just have to keep in mind, there is also always reason to rejoice. I have my own nice example: you might remember that I bemoaned the fact that the church where “my” falcons nested, a few blocks from my office, had to take the spire off their steeple last spring, so the falcons lost their scrape and are thought not to have reproduced at all in 2003. Good news! In the last couple of days I have seen a male and female falcon feeding together on another building, across the street from where I wait for the bus home every day. They are still in the neighborhood, and if they’re feeding here, probably have found a place suitable to lay eggs nearby. Life does go on!”

The photo is of my friend BPF, to whom I wrote the original message about 42. He checked out the perimeter of Lake of the Woods (in Yellowstone) before we circumambulated it in October of 2004. We found piles of clean elk and other bones on the far side, probably brought there by wolves or coyotes.

Posted by Veronica Wald at 1:39 PM No comments: