Three weeks ago we returned from ten marvelous, as always, days in our favorite part of the world, Yellowstone and Grand Teton National Parks. 2014's marvels included hikes to fascinating locales new to us plus a few favorite places we haven't checked on in a while, our first (at long last) river otter sighting, catching up with beloved friends, and a photo ops galore. Premier among the wildlife-sightings was our favorite grizzly bear 399, known to her fans as Queen, or Lady, of the Tetons. She is the exceptionally fecund bear that likes to bring up her young broods near the roads in the 5-1/2 mile region spanning two visitor areas, Colter Bay and Jackson Lake. Last year we relished watching her three new triplets play along a side-road just far enough away to be considered safe. Indeed, 399 was wholly focused on eating grasses, roots, flowers, insects and worms while the kids alternately nibbled and grubbed and cavorted, all ignoring their thrilled paparazzi.

We got up early on our third morning to go look for wildlife, which is really just code for "look for bears." Only a mile or two down the main road we could see the indubitable sign of wildlife activity ahead: many dozens of cars parked along both the shoulders and people all running in the same direction, more or less loaded down with camera gear. Who should be eating and playing along the south side of the road but our most familiar and favorite grizzly, 399 and two year-old cubs. This how we learned that one of the three had not survived the winter. Big fierce muscular grizzlies, especially young ones, it turns out, are in fact very fragile and at high risk for death before they are sufficiently mature to reproduce. It's not known what happened to the third cub, though there is speculation that before the bears even denned for the winter it was separated from its mother. In their first and second years, grizzly cubs cannot survive alone, especially as winter approaches.  Although they can feed themselves plant and insect material and eat from carcases (and, alas, human food supplies and garbage, though this no longer happens in Yellowstone/Tetons) they come across, they still need their mother to hunt meat for them and occasionally, to nurse them. In this photo, one of 399's axillary mammaries is clearly visible  behind her left foreleg. Note her nice grizzly-style claws, too. 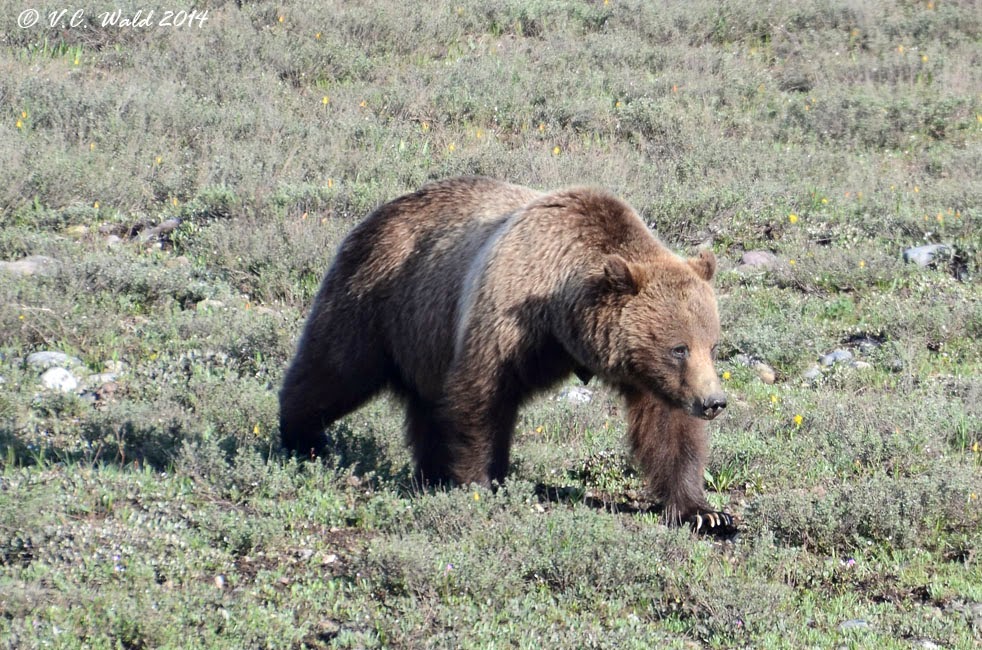 Here she is with one of her year-old cubs, for size comparison. This nose-down posture is how we see bears most of the time as they eat-eat-eat all summer to assure reserves to make it through another winter. 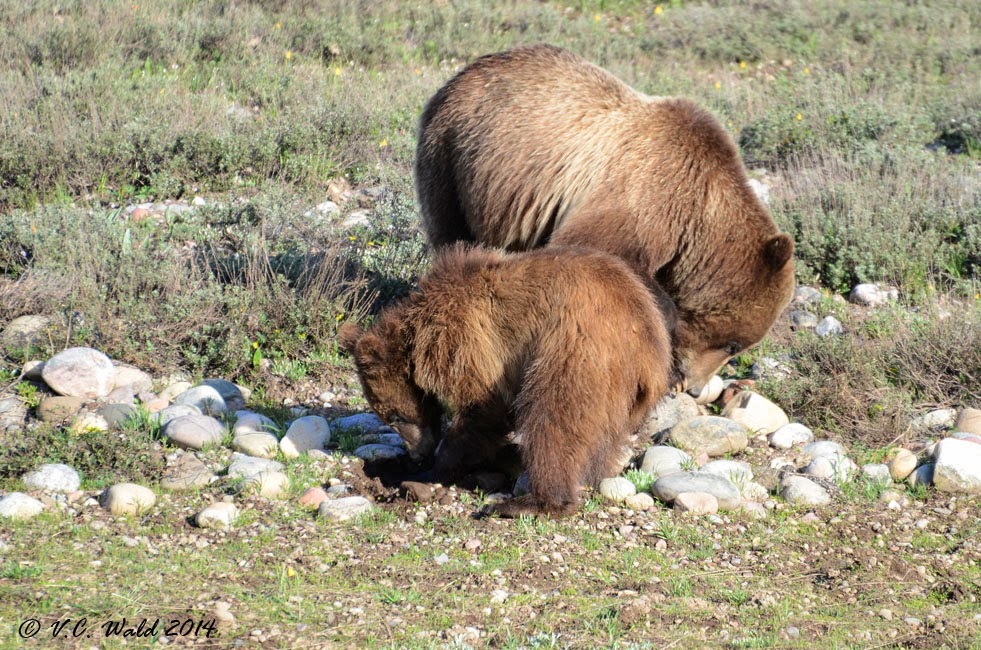 399 was huffing (inaudibly to us, but we could see it in her expression and movements) at the second cub, about 50 feet behind this beautiful mirror of a snow-melt puddle, to "come along now!" The other cub was quite busy overturning rocks and pieces of wood to find tasty ants and worms. To me it seems unlikely that such large animals can satisfy a big portion of their caloric needs by eating plants and small invertebrates, but they do. 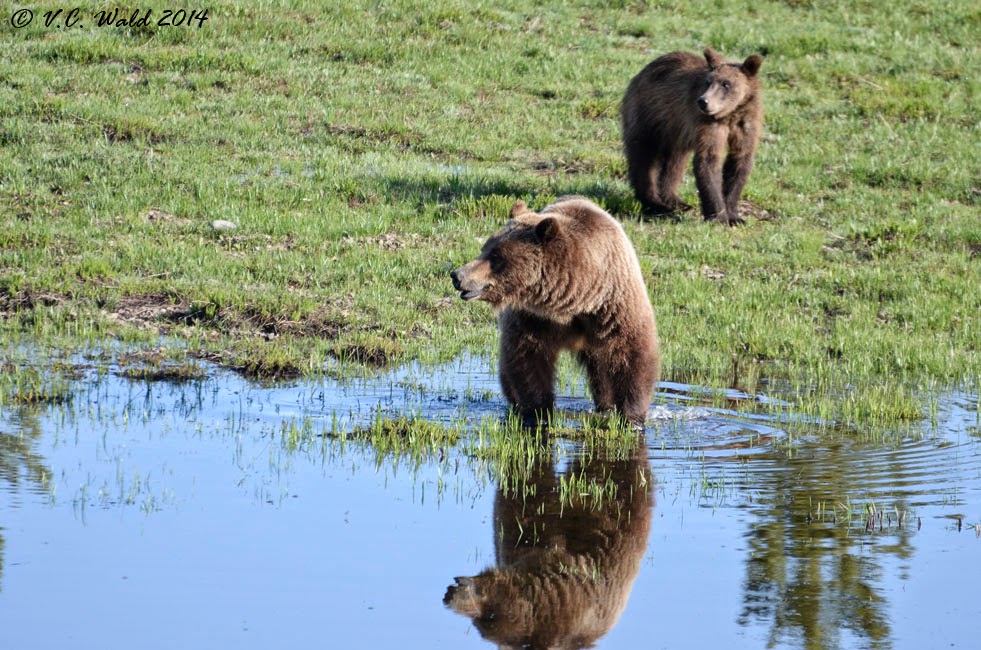 Adding to the romance of watching these bears is the stunning scenic backdrop of the Grand Teton mountain range. Her characteristic shoulder hump is very evident in this shot. 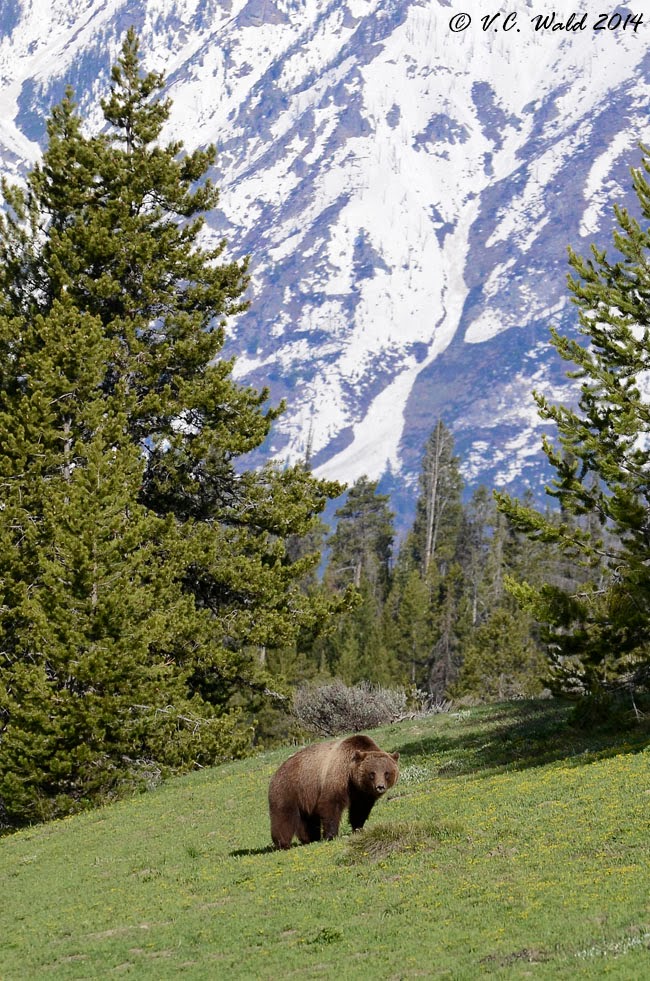 The rangers, like this guy in the Smokey the Bear hat and reflective vest, work very hard all summer to protect not only park visitors but these habituated bears that really are not skittish enough around people. I call this photo "Baby Bear Mayhem" as one of the cubs makes its way across the road and stops to look at the paparazzi. All traffic is stopped of course. The folks on the left side of that tour bus got a great look at the cub. Note the license plate on the big black SUV! Many people come to the park purely to watch and photograph bears. 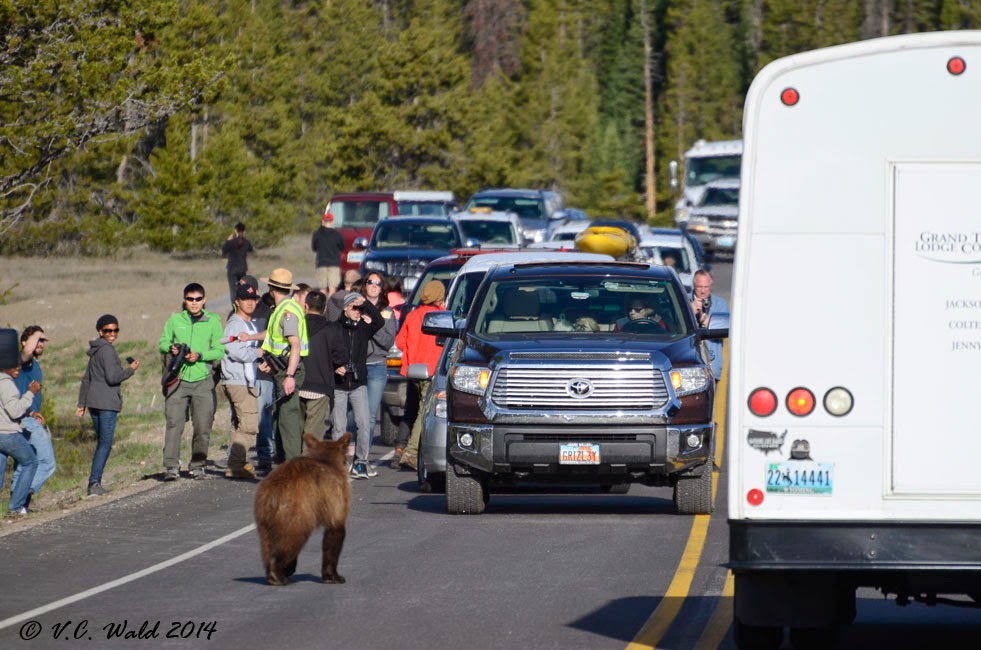 The cubs made it across safely but one continued to evidence curiosity about its watchers. Frankly, it would be much better if it were shyer. 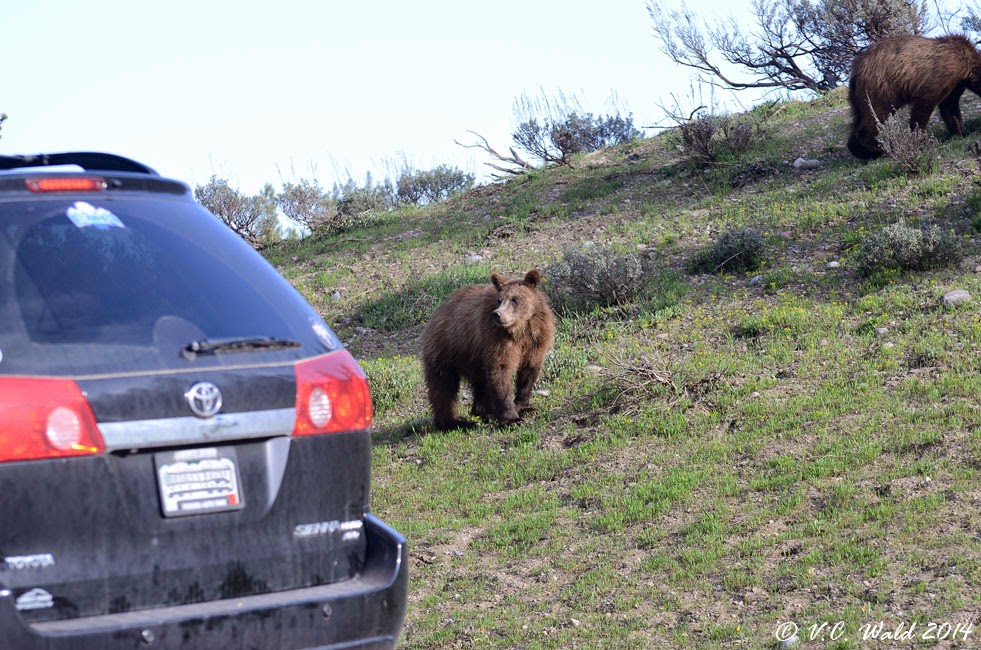 Finally Mother Bear 399 found herself reacting to the passing of an over-sized camper. 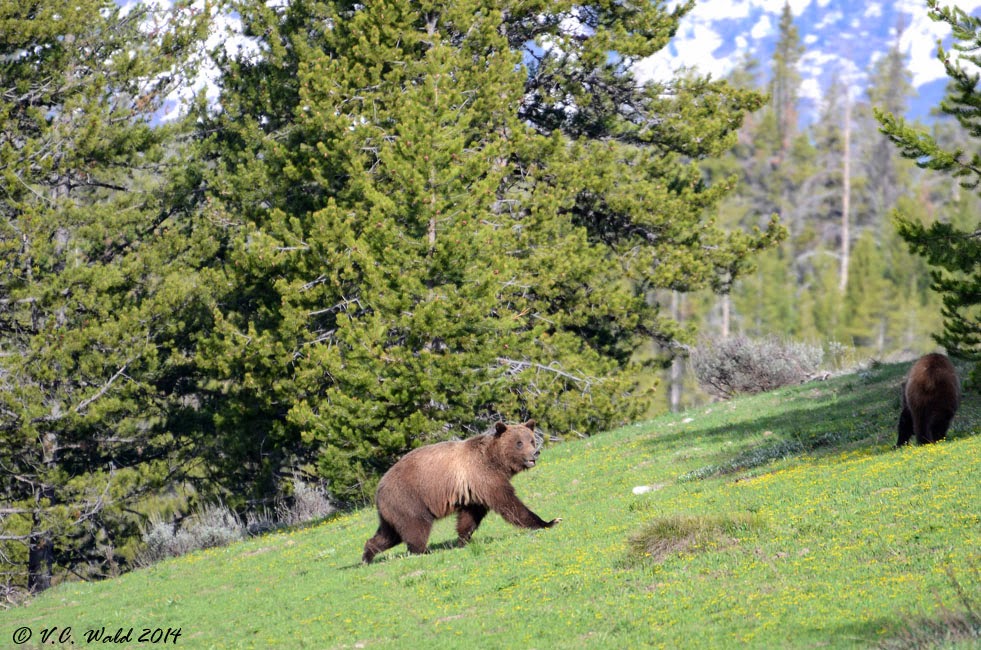 But then everyone went back to priority bear business, namely, cashing in on the nutritious green grasses and flowers before they naturally dry out as the season goes on. 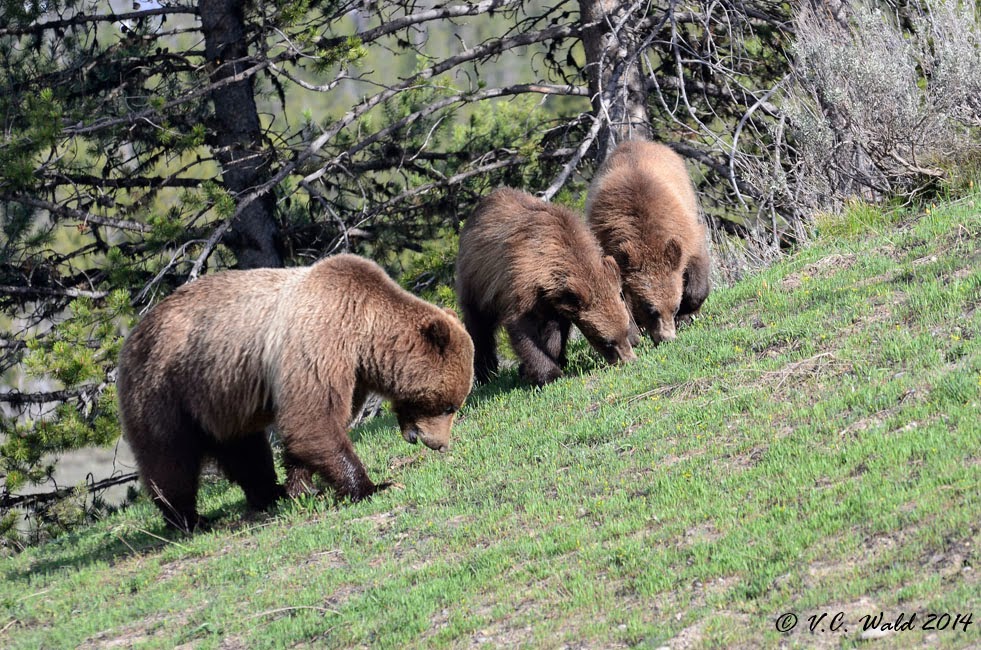 People often ask how close I was when I take these kinds of pictures. Here's a wide angle on this scene. Although it looks like there are no longer a lot of people around, in fact the rangers do not allow people to pull over near the bears, so as the family gradually migrated from one side of the road to to the other, to the pond, and along the grassy hill, the rangers regularly barked orders to the watchers to back up, and eventually, to move their cars well down the road as well. In this picture I am at the vanguard of a large crowd of photographers (many blessed with much better glass than I) with maybe 50 or 70  cars behind us. 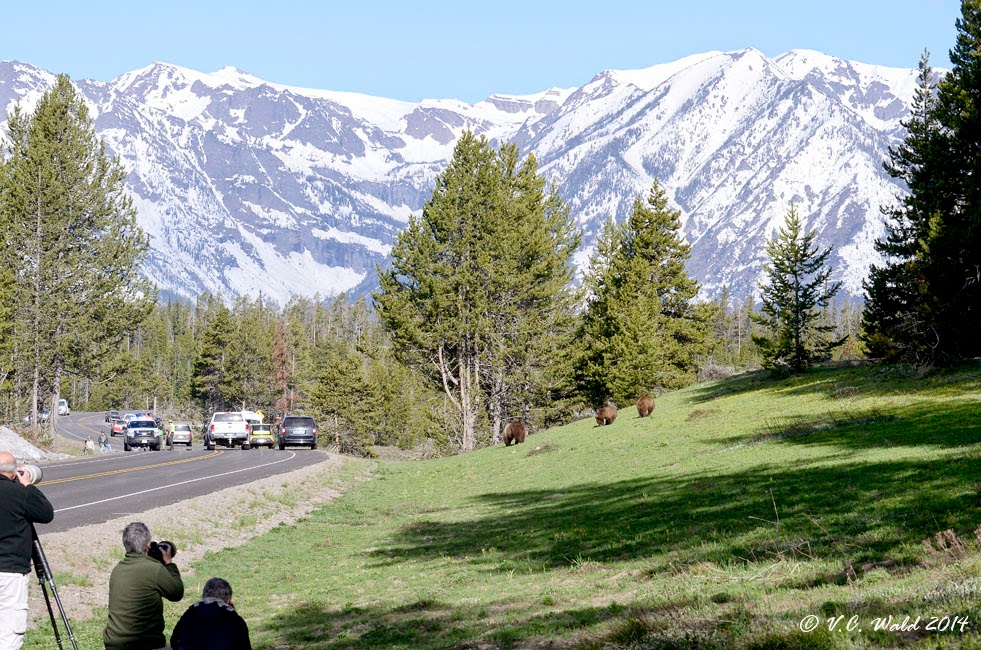 This was without a doubt the most rewarding time spent with 399 and her many cubs since I first spotted them in 2006. This year we were lucky to see the family twice more before we left the park, though never as clearly nor for such a prolonged and fruitful bear-watching session.  The rangers were certainly harried, and many park visitors contentious about not being allowed to just stop and get out of their cars, especially along a crowded intersection later in the day such that there was a great deal more traffic to contend with. It concerns me that the bears are utterly nonchalant about traffic, and so many people are either oblivious to their need for distance or alternately, not interested in seeing the bears and aggressively trying to get past the "mayhem," both set-ups for bear and/or people disasters.
Posted by Veronica Wald at 8:44 AM 1 comment: