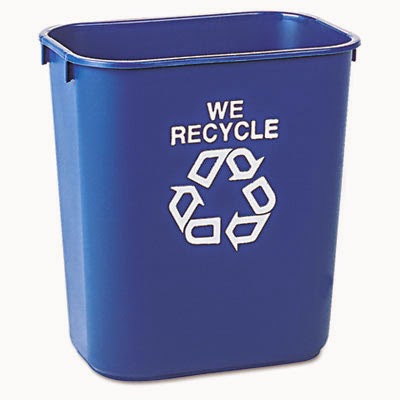 My faith in the value (to the environment, to the economy) of recycling  goes back a long, long way. My faith that the material that goes into the recycling bin ends up being recycled has never been strong, and less strong than that, that enough people recycle properly to make much of a difference. In the late 1980s I pushed for the availability of little blue waste-baskets at every desk at the huge academic medical center where I worked. Eventually, everyone did get a blue receptacle for the massive volume of papers we produced, back in the early days when desktop computers were touted as the solution to the over-use of paper, which were also the days when so much went awry with printed materials - such as the times miles of wide, continuous paper jammed on its roll through the dot-matrix printer, requiring a re-run, or two, to produce usable output. However, the blue bins with the universal "recycle" icon were (and still invariably are) distributed in the absence of any education or guidance, so even a sincere user has little idea what materials should be deposited within. The most casual observations will show that half the paper ends up in the regular basket and half the non-recyclable materials used in everyday business (including the user's lunch leavings) end up in the recycling basket. And that's before the housekeeping service picks up the baskets and dumps the contents of both into the same large plastic bag for disposal.

Years ago in Chicago I also instigated my 75-unit condominium's participation in recycling, but only by proving that the cost of  newspaper, glass, steel, and aluminum pick-up would off-set the cost of having it collected as garbage. For many years now I, and most of my neighbors, have dutifully deposited newspapers, cans, and bottles into the large signal-blue bins in the condo's garage. Those bins were picked up by the Hyde Park Resource Center, the original, and at the beginning, the only option in our 'hood; HPRC was run by devotees and there was no doubt the materials ended up where they were supposed to: in new newspapers, airplane bodies, and pickle jars. Eventually, one of the local grocery stores started accepting milk jugs and other plastic. So I do have a small, short history of hauling recycling. I like to think some of those milk jugs I dropped off are now incorporated into the newer boardwalks around Yellowstone's geyser basins. I can only hope it is so.

When we moved to our house in Montana this fall we deliberated on lots of things including whether to pay the trash pick-up service to take our recycling along with the food debris (not set up yet for mulching) and litter box leavings and materials that cannot be recycled (aka, garbage). We decided instead to start by taking our recycling to one of many locations in Bozeman, most located in out-of-the-way corners of the massive parking lots of retailers such as Home Depot and Target (extra kudos for Target, the only place in town that takes glass) and coincidentally, very close to where we live thus necessitating only the tiniest of diversions from routes we follow anyway. In particular we have been producing truckloads of cardboard between the gradually emptying moving cartons and the containers our many new purchases (oh, how much stuff a new house needs!) arrive in.

Given this opportunity the two of us have been very vigilant about our "post-consumer waste" as it's termed, much more so than we were in Chicago. KLK in particular is a huge consumer of canned soda, and I like my beer in bottles, but we also go through so many other items and have inspected even berry and tomato cartons for the distinctive icons of recyclable plastic, which, it turns out, are usually there.

Two big surprises have come from this new lifestyle of ours: 1. We don't live as light as we thought. Every day we are between the two of us capable of generating a mountain of material that would contribute a larger share than we imagined were it going to garbage, and 2. Bozemanians are very dedicated to recycling. Although I've known about and followed life in Bozeman for as many years as I've been hoping to move here, given that this is a politically conservative region, where the cause of climate change is not universally believed to be attributable to man's profligate behaviors and people drive pick-ups, not Priuses, I have been extremely pleased to witness how many residents are responsibly splitting the recyclables from their waste and exerting the mental, physical, and fossil-fuel energy to get it to a place where it will be correctly destined. The many large receptacles at each location - these photos show only a few of the bins behind Home Depot - and that they are often filled to capacity when we stop by in spite of being regularly emptied - make me doubly glad we live here among so many kindred spirits. 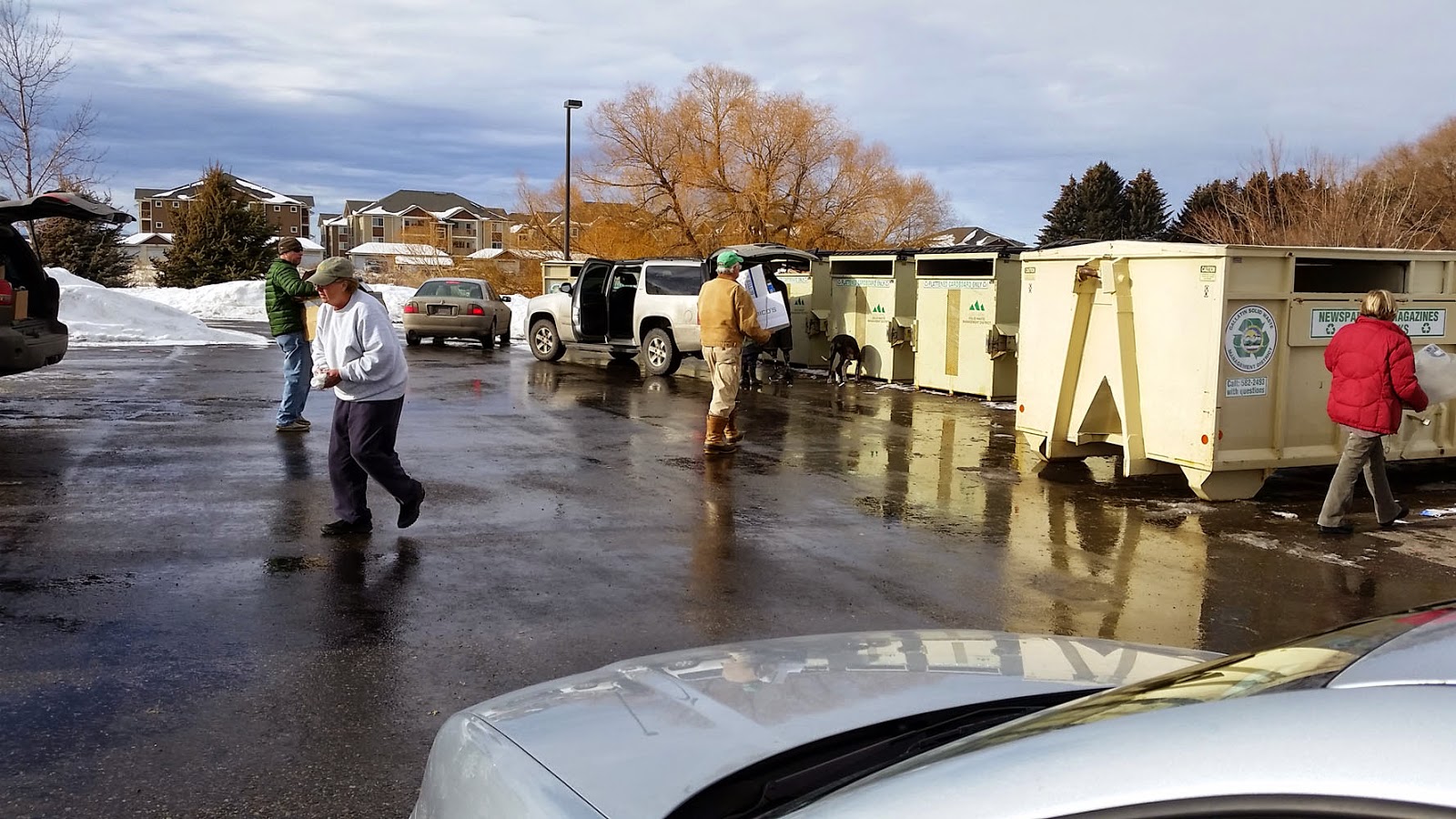 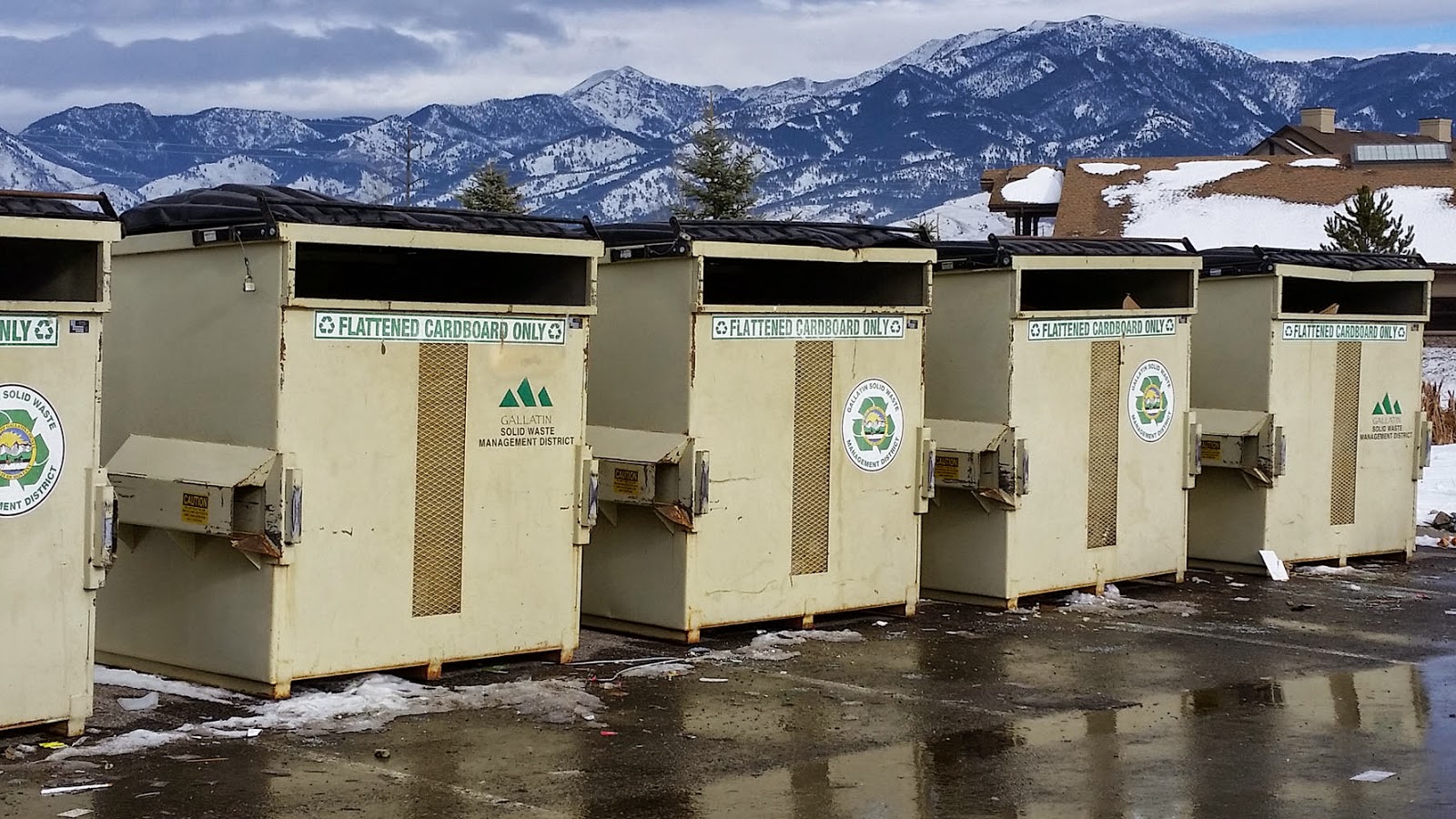 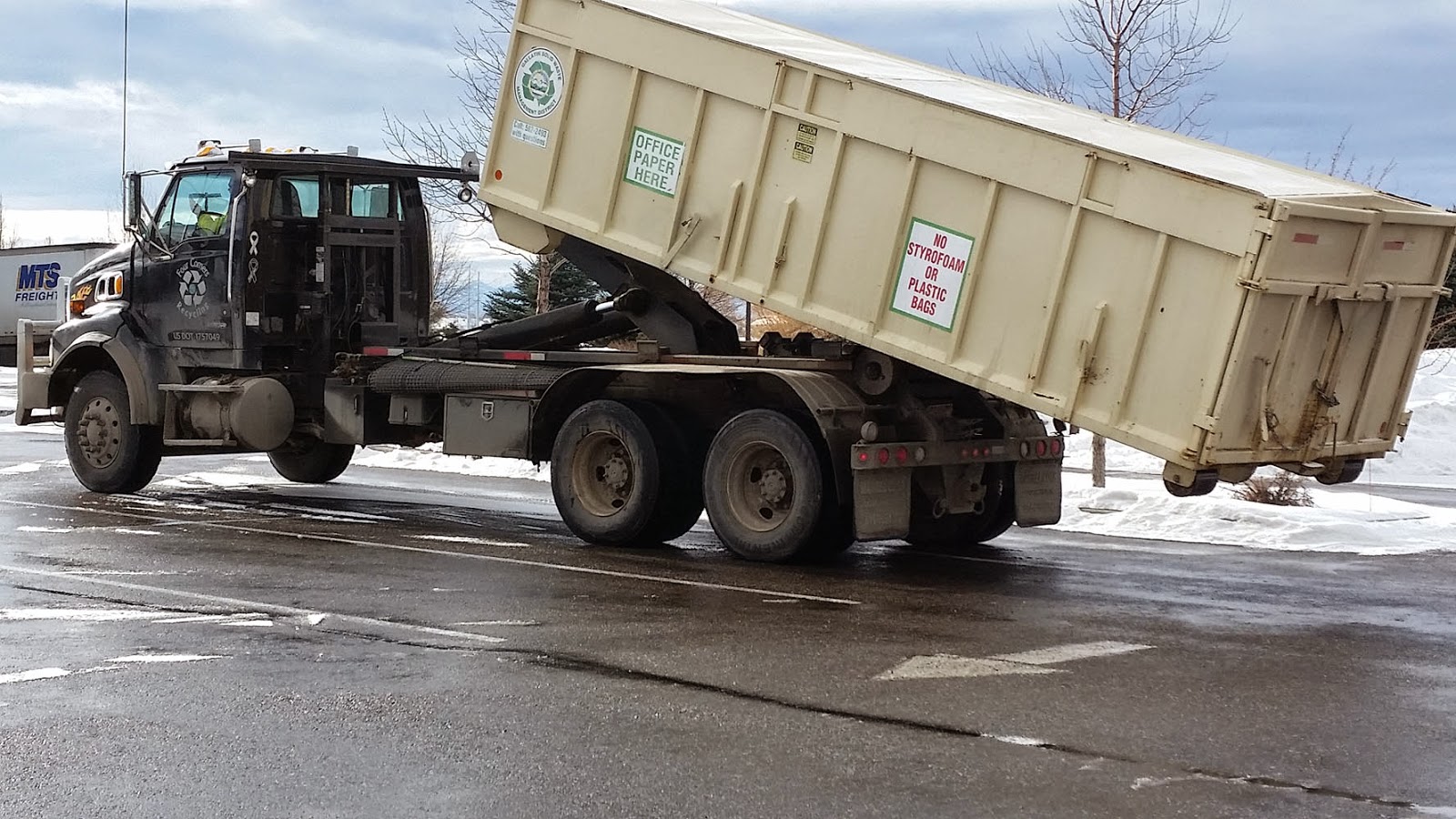 Here's a sampling of our daily interior leavings; the bigger cardboard, and plenty of it, is out in the garage waiting to be flattened for Home Depot's waiting bins. 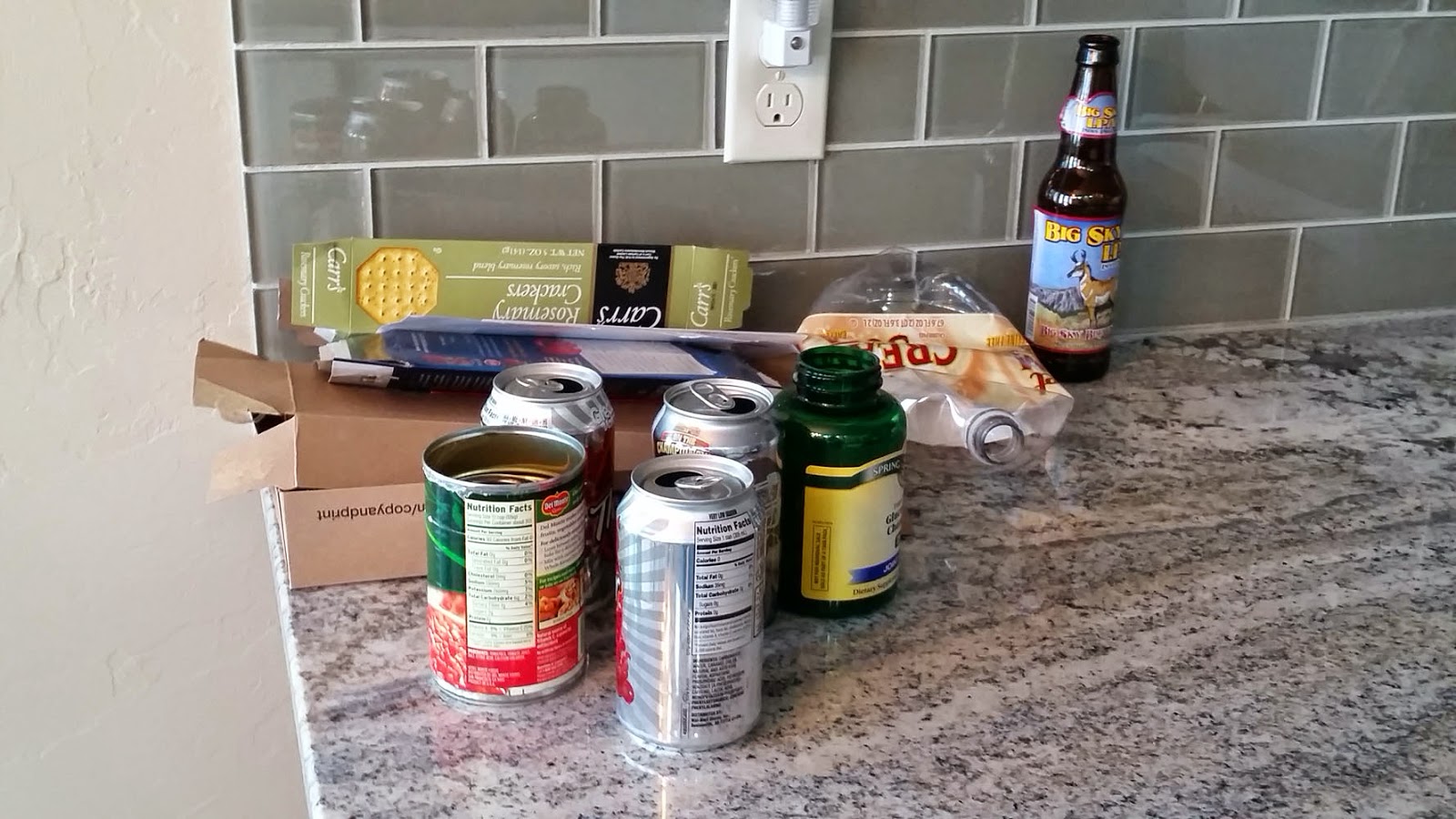 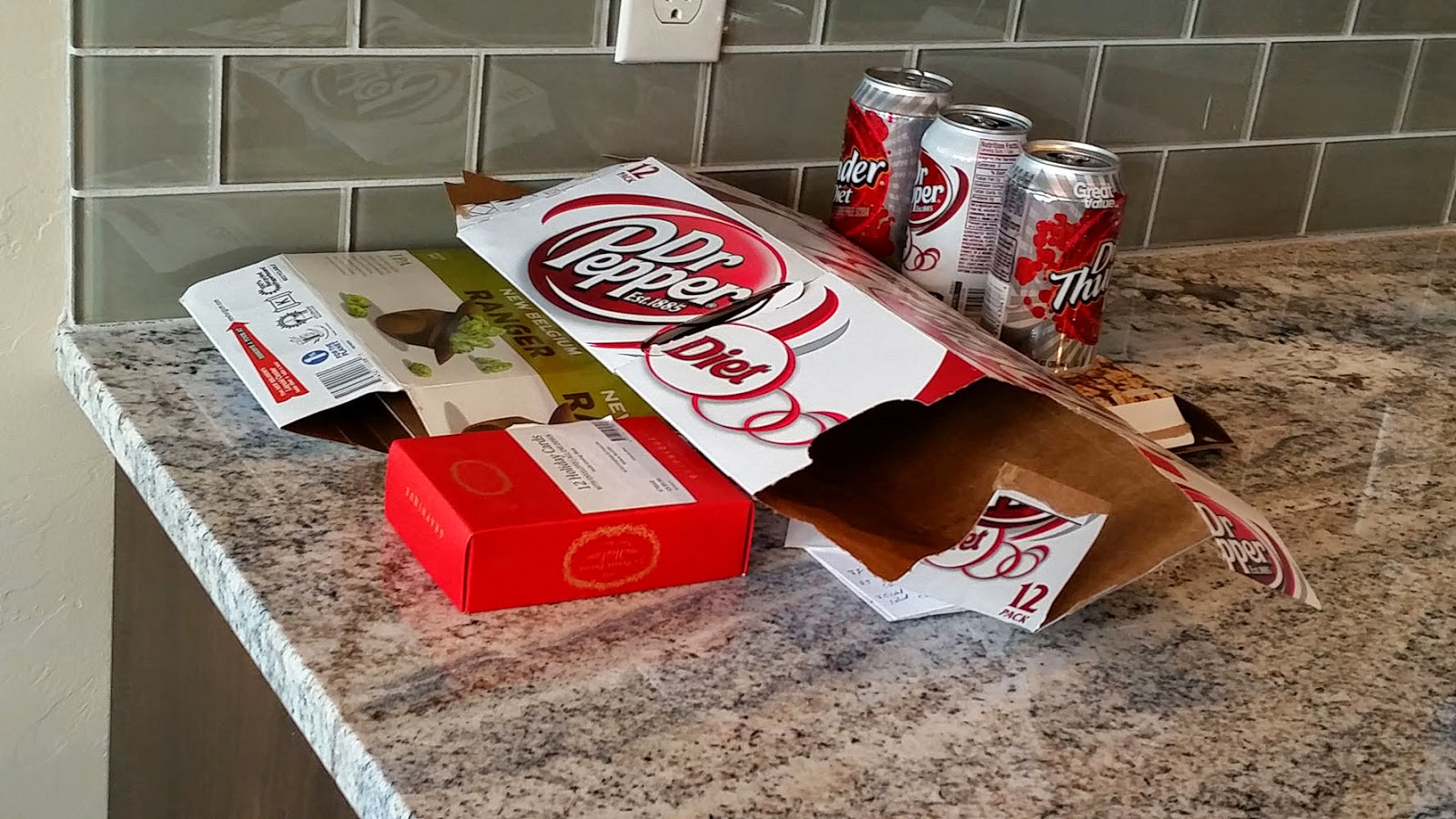 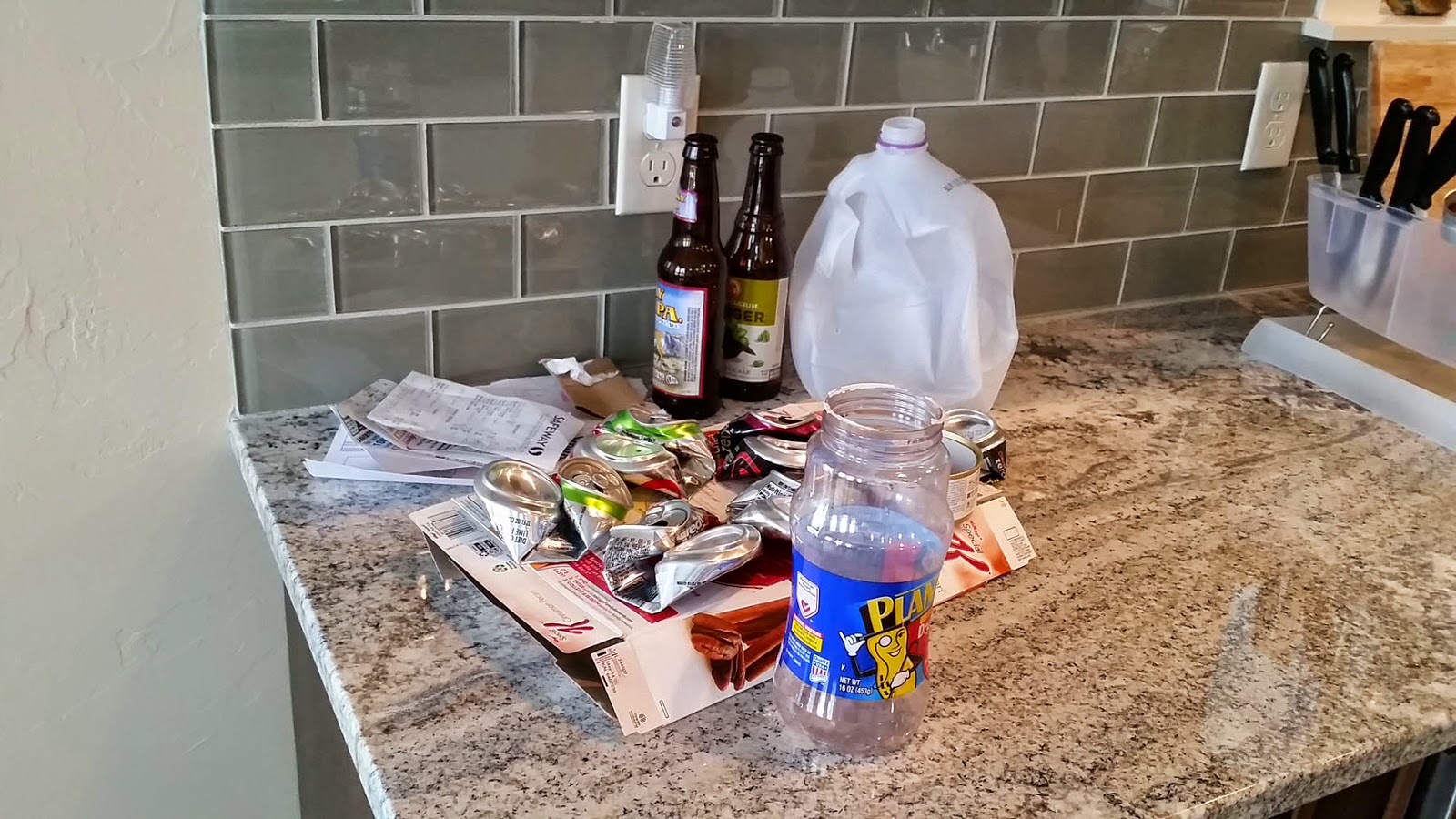 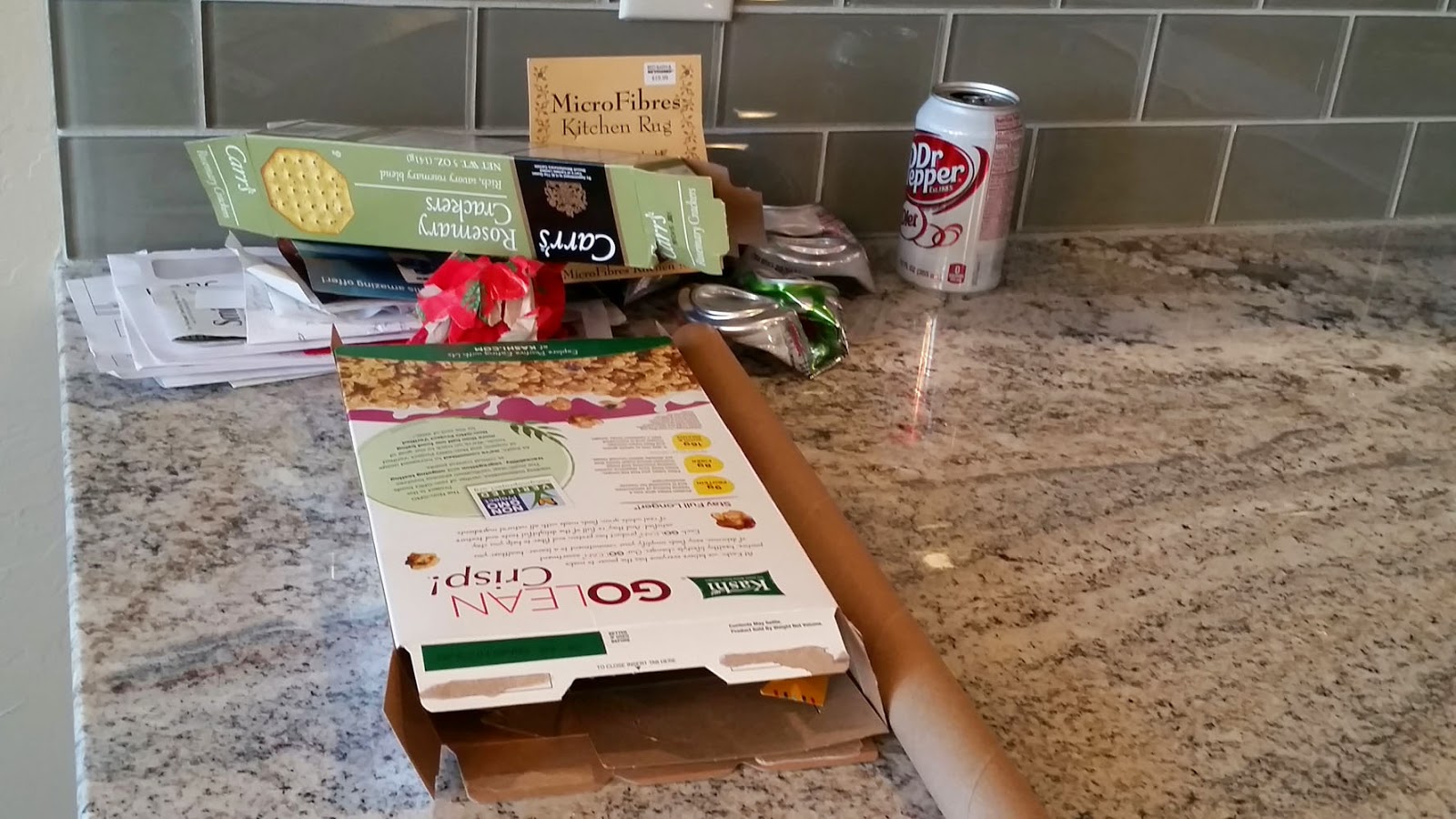 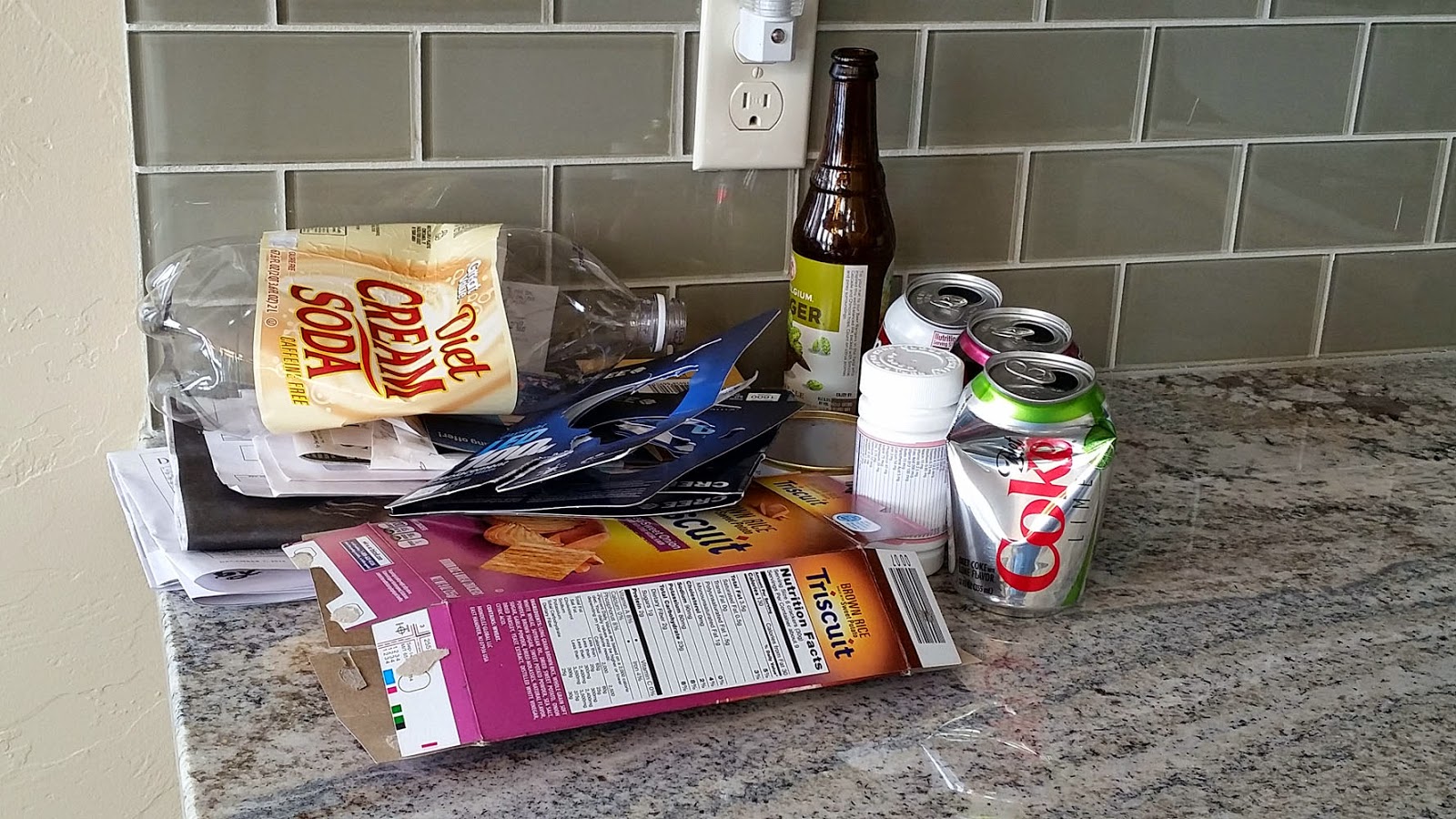 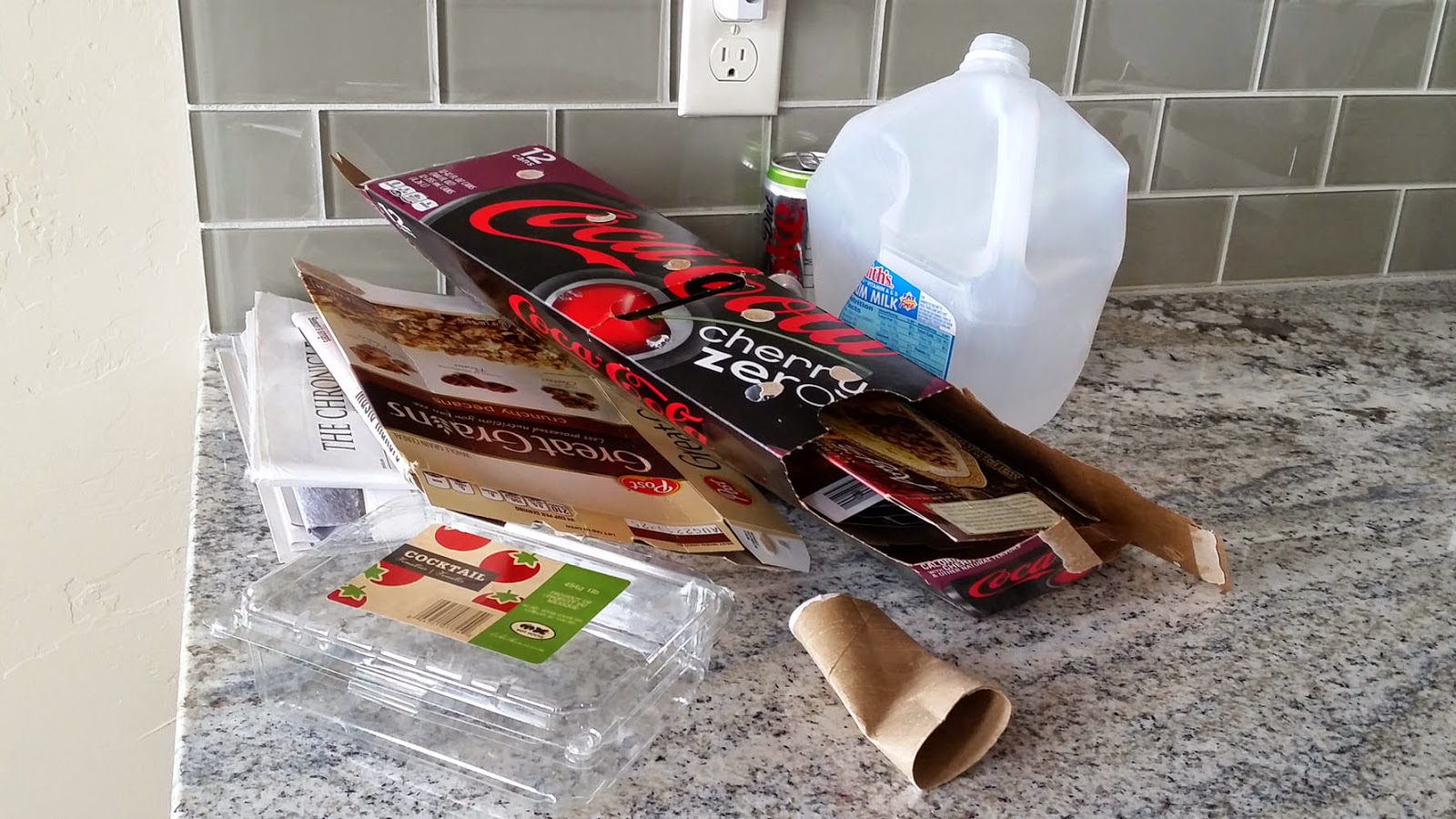 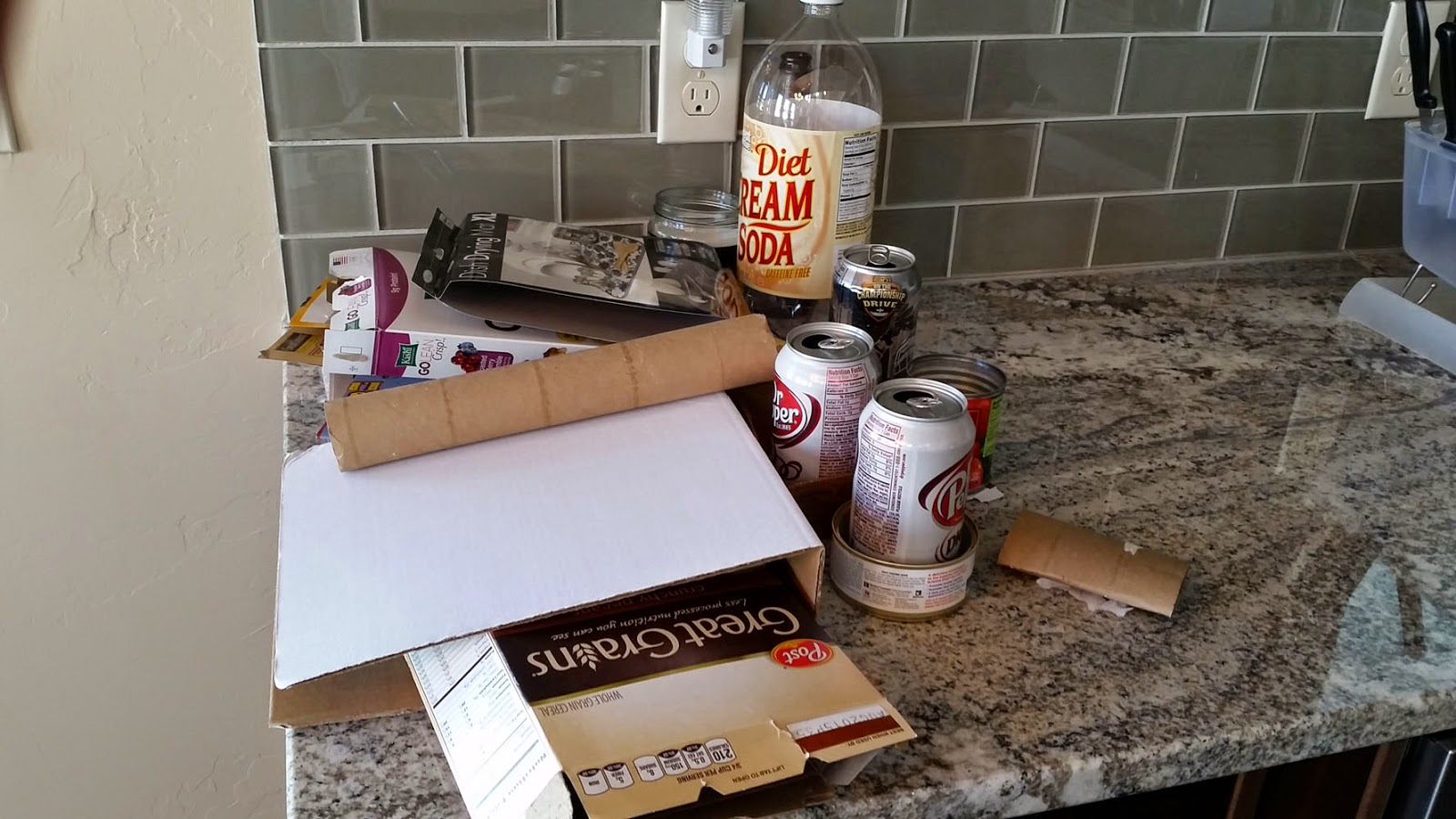 (All photos taken with my Samsung S5 phone, for convenience and incredible sharpness and ability  to excellently expose photos in less-than-optimal lighting conditions.)
Posted by Veronica Wald at 3:05 PM 5 comments: 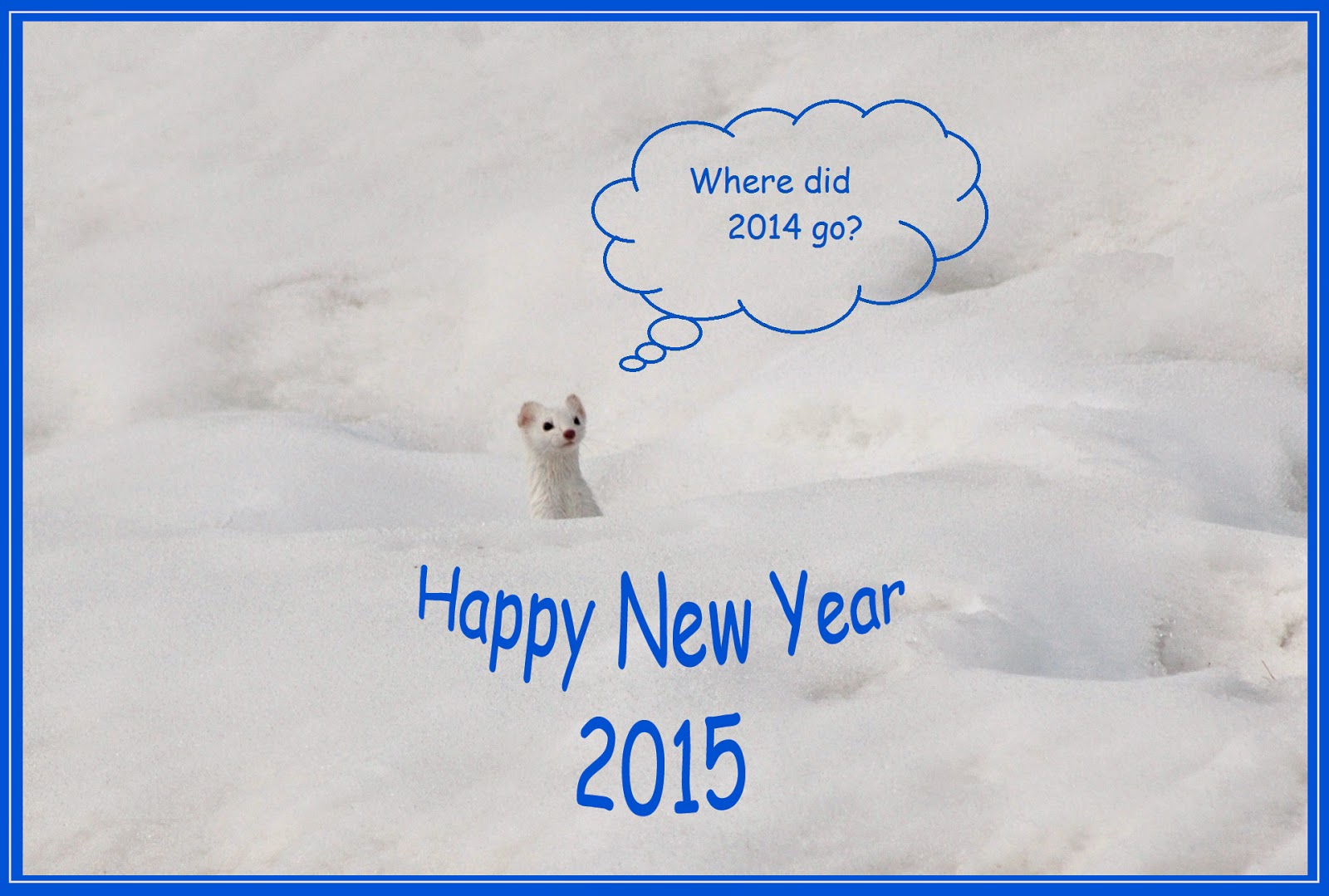 Posted by Veronica Wald at 12:37 PM No comments: