From the Joke's on the Consumer Department

VALUE! 30% MORE vs. 4.6 oz size.
Caveat emptor. Ultrabrite (which is a very good, very inexpensive fluoridated toothpaste made by Colgate) isn't, and never has been, available in a 4.6 oz size.

Posted by Veronica Wald at 1:35 PM No comments:

Global warming is local: The Morning After (Chicago edition) 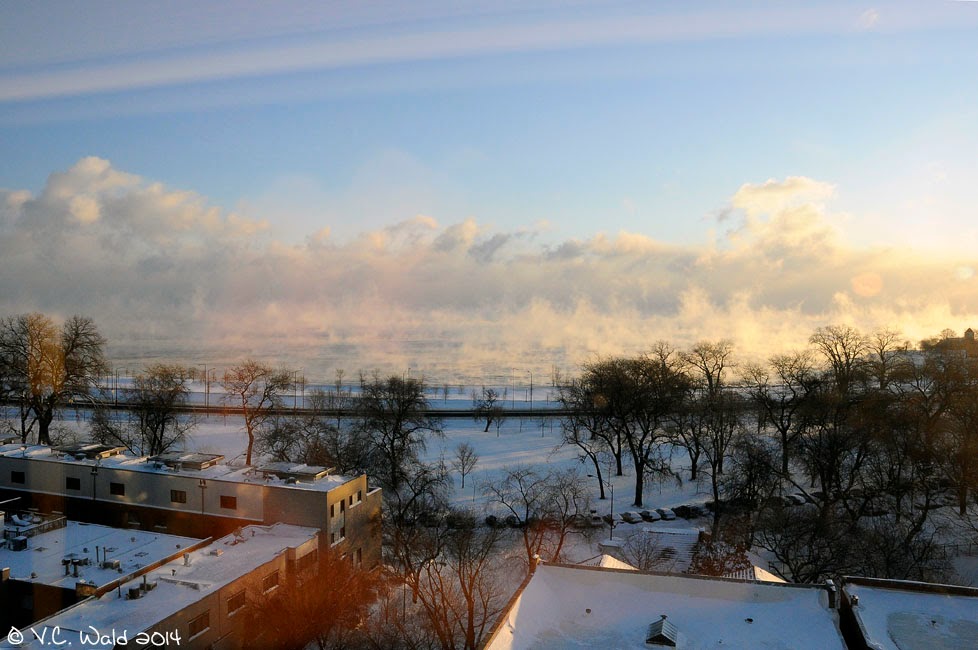 The couple of hundred yards of ice that was forming along our Lake Michigan shore yesterday has disappeared, due doubtless to shifting currents and wind direction. The water underneath was about 33o Fahrenheit today, and the air in our neighborhood was reported by the weather service to be about -11o (-24o Celsius). For the record it's now warmed up to -10o. The photo, taken from my dining room window shortly after sunup this morning, shows how that temperature differential causes clouds of surface steam. Amazing and beautiful.
Posted by Veronica Wald at 3:36 PM No comments:

Because the weather in Chicago today might best be described as "advanced winter crossed with snow globe" I hope you won't mind if I don't go outside to take pictures. Instead I'll use some from the archives to provide a visual approximation of what's going on.

What I don't have is a proxy photo to represent today's white-out alternating with blowing horizontal snow. It's 23o Fahrenheit at the moment -- not an unreasonable temperature for early January -- in fact I would say that's a desirable temperature for the normal course of plant life, especially species that depend on prolonged cold to sprout and flower at appropriate times of the year, and that benefit from prolonged subfreezing temperatures to control insect infestation. However, with winds of 20+ miles per hour, the "real feel" against skin is much closer to 0o F. That's dangerous for humans and photographers alike. There are serious National Weather Service winter storm warnings in effect, and cancellations have already gone out from every place I'm due tomorrow including my employer (work from home) and my otherwise regular Jazzercise class (cancelled).
NASA's announcement of December 9, 2013 (just one month ago) that the coldest area on earth, in Antarctica of course, has now been documented by the Landsat 8 satellite, and wave following on wave of snow storms hitting the U.S. east coast this winter have delighted the global warming nay-sayers.  They take all of this as proof that global warming is a conspiracy of liberals and scientists (who are every bit as ignorant and misdirected as politicians in their view) intended to...well, I'm not sure what all negative motivations are attributed to proponents of the "theory" of global warming, but a predominant one is "it will be used to separate people from their coin" (quotation from a person who posts under a pseudonym on a chat page I frequent). While many are willing to admit that the earth's climate "ain't what it used to be" (in recorded history) they refuse to accept the possibility that the speed and average direction in which change is occurring are causally related to human activities. I agree that it's not only very hard to wrap one's head around apocalyptic visions (not just NIMBY attitudes, in fact, especially if they involve engulfing one's own weekend cottage at the beach), it's even more difficult to suggest that the way to preserve earth's future commodiousness for human, animal, and plant life involves significant changes in personal behavior. Who wants to give up their car? Who wants to give up hopping on a greenhouse gas-spewing jet plane to get to desirable destinations? Who wants their diet narrowed to locally produced food only? Who wants to give up eating methane-farting beef? Who above the Mason-Dixon line wants keep the thermostat at 68o F from October through April and at 78o from May through September?
My opinion is that if the scientists and policy-makers have messed anything up, it's certainly climate change public relations. The first and most damaging mistake was to  label (well documented and frightening) trends in world-climates as global warming as opposed to global climate change. Followed by the word "theory" which confirms for doubters that scientists admit global warming is unproven. And the slightest sign of disagreement among researchers (which, after all, is one of the great attributes of modern science: debate is essential and consensus on every detail is not) is taken as proof beyond a doubt that "they" don't know what they are doing. But scientists persist, enriching themselves from (supposedly) lucrative and career-boosting taxpayer-supported government grants that reward such claims.
What has not been conveyed adequately to the public is that weather, such as the unusual (but  certainly not unheard-of) phenomenon Chicago and much of the U.S. is experiencing today, is not climate.  However, many anomalies in weather, such as extreme cold with precipitation, and for that matter, extreme heat waves such as that being experienced in Australia are in fact caused by the gradual warming of the earth.
Global warming may be local, especially for those whose world is constrained by tunnel vision, but global climate change is not.
Posted by Veronica Wald at 12:00 PM No comments:

I've visited and enjoyed the massive, sprawling, overwhelmingly opulent and magnificent Hearst Castle,  also known as La Cuesta Encantada (The Enchanted Hill) a couple of times over the past three or so decades, but I think I've finally gained sufficient life experience now to be awed by it in ways I could not be before -- it is, after all, an awful lot to take in. The Castle, for which ground was broken in 1919, is perhaps the greatest legacy of media baron William Randolph Hearst. It is now managed by the California State Parks, open for public viewing, and maintained to the highest museological standard.
Hearst (grandfather of the notorious kidnapping victim-cum-criminal-cum-model citizen, Patty Hearst)  was himself bigger than life, and his enterprises were fabulously lucrative, as woefully dys-imagined in the movie Citizen Kane. Not one to fritter away his fortune on profligacy (at least, not the usual kind), Hearst developed the family ranch overlooking the Pacific Ocean at San Simeon, California, into a mansion and estate beyond compare. Today it's a do-not-miss along California Highway 1.
The Castle was a 28-year collaboration between Hearst, with his money and acquisitive taste, and the brilliant architect Julia Morgan. Morgan, like Mary Jane Colter, was a standout in a field dominated by men, and like Colter, her considerable accomplishments beyond the the work for which she was best known during her lifetime (the Castle), was largely uncelebrated until recent years. Also like Colter, it seems she never had budget constraints. Nor limitations on the talent and skills she could recruit to import, build or restore, install, replicate, and maintain the exquisite treasures,  baubles, fancies, and architectural elements in their entireties, mostly of the Mediterranean world and from all eras, ancient to 1930's and 40's contemporary.
We started the morning of our tour at our sea-level hotel, with the famous California fog so thick we could hear but not see waves sloshing on the beach across the street. We boarded a bus at the visitor center a few miles away and were driven up along the winding road until suddenly we popped through the fog and found ourselves looking down at a bright cloud deck of puffy white shining in the California sun, exactly as if we had ascended in a plane. 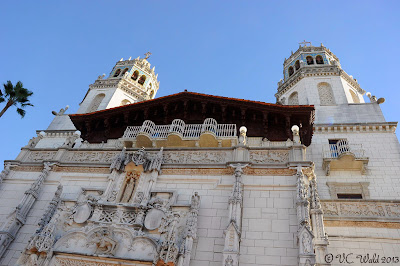 We gathered at the foot of the facade of the La Casa Grande (the big house, main house) to admire its busy decoration and to take a look up into the bell towers.  Inside we found ourselves in the cavernous Assembly Room, too dark to photograph well, but designed to cushily accommodate large numbers of guests for cocktails prior to proceeding to dinner in the so-called Refectory. 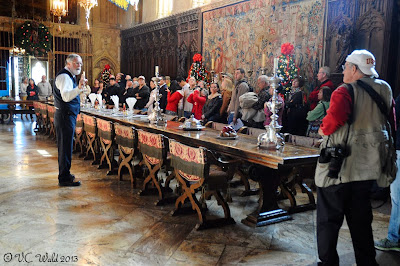 At this "modest" dining table the Hearsts (William Randolph and his wife Millicent, and, after their separation, WR and actress Marion Davies, his companion for the rest of his life) hosted society's luminaries from politicians to Hollywood mainstays to businessmen and celebrities of all ilks. 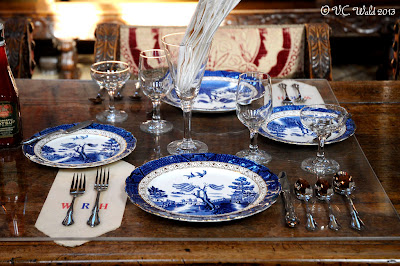 It's hard to imagine that the Hearst dinner parties were ever described as "casual," but that's the way he wanted them.
Next up was the Billiard Room, lined with this huge 15th century French tapestry hunting scene  to suggest, I suppose, that the room is meant for the recreation of very well-dressed people. 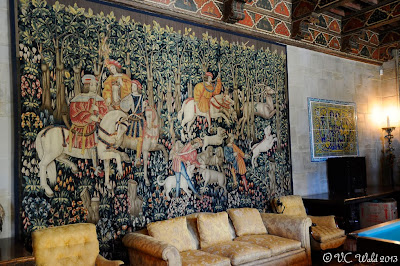 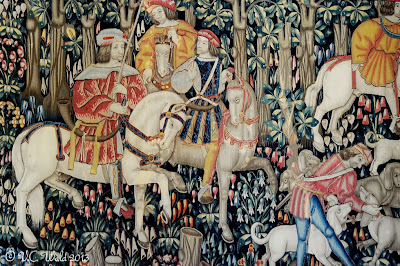 No object in the Hearst Castle, however old or new, is in less than exquisite condition.
The final interior room of our tour was the movie theater in which Hearst and guests, and, apparently also the staff, enjoyed movies produced at Cosmopolitan Productions, owned by none other than WR, of course. (Most of the movies were not memorable, but were certainly money-makers at the time.) I've not been able to establish seating capacity, but it was at least 50. In the cavernous room too dark for my photo purposes, this shot of  a "simple" life-sized wall sconce well represents the general idea. 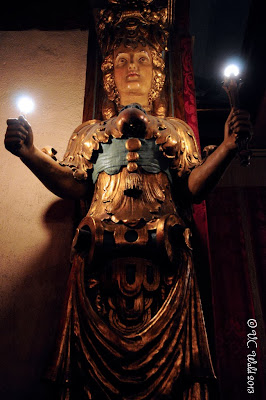 Not to be outdone by the interior are the vast gardens with free-standing guest mansionettes, swimming pools, tennis courts, sculptures, fountains, and luxuriant flora. Here is Casa del Monte, guest house "B" (out of three) which is doubtless larger, prettier, and most certainly better attended and accoutred, than the average American middle class home: 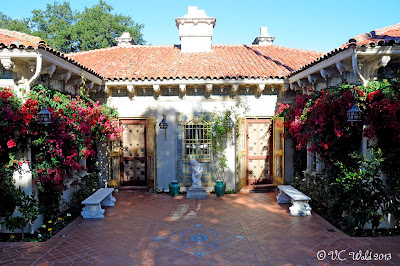 Sculptures and fountains and embellishments abound: 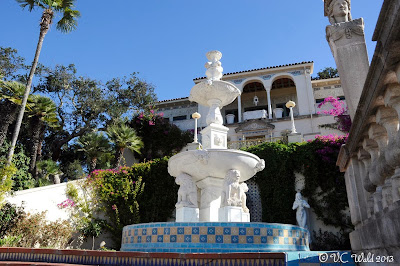 In spite of its prominence in views up to the Casa Grande from the Neptune Pool (see below), I've been unable to identify this lovely Spanish-style fountain. Perhaps rather than being an original object of great value, it is a cheap imitation. One of the annoying shortcomings of the Castle-as-museum is the complete absence of labels or on-line access to catalogs of the holdings. I wouldn't be surprised if this is intentional, so as not to spoil the illusion that this was a real home, albeit inhabited by its owner part-time, and by people who do not seem particularly real. 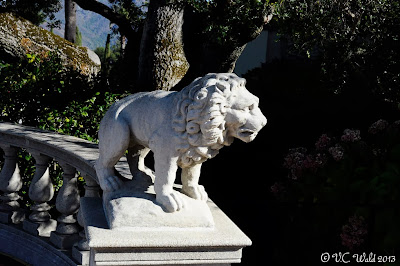 Another unidentified but charming garden ornament. 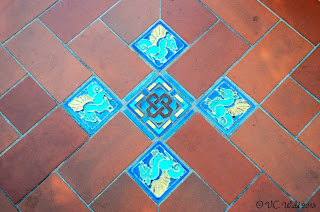 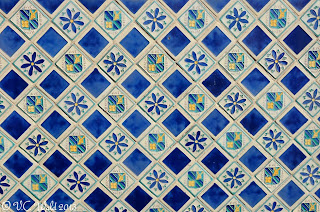 No opportunity to add detail was passed up.
The iconic ultimate outdoor attraction at Hearst Castle is the 345,000 gallon Neptune Pool with its complex period architectural and decorative references and sky-mirroring color. 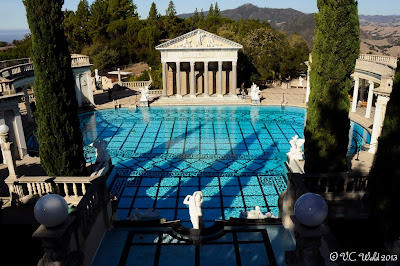 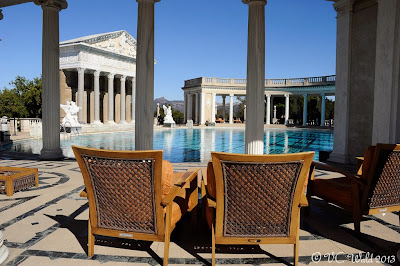 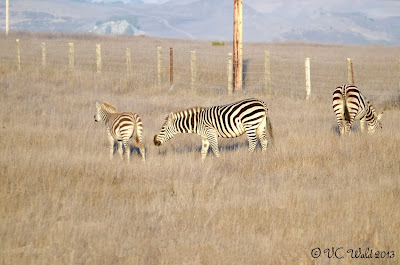 Some species, like the poor polar bears and elephant, lived mostly in the confines of a zoo. Others, like these Grey's zebras, progeny of the originals, were free to graze with the beef cattle on what is now the Hearst Corporation Ranch.
By the time we had to go on our way the fog had cleared, revealing views all the way to the Pacific Ocean, providing a taste of what it was that Hearst so loved about this spot. 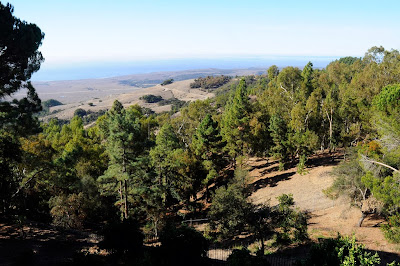 This report barely touches the surface of La Cuesta Encantada's epic. The researching and writing of it has brought home of how little I was able to absorb, even on this visit as a more worldly person than on previous encounters. It would be an enormous indulgence to go back again too soon, though. But indulgence is the name of this game, is it not?
Posted by Veronica Wald at 2:26 PM 2 comments: