I'm sorry, but I really don't find it charming or funny

Yesterday afternoon I attended Lyric Opera of Chicago’s La Fanciulla del West (The Girl of the Golden West), Puccini’s classical opera, his only (among Madama Butterfly, La Boehme, Tosca, and others) with a physically and morally strong female lead, many amusing touches, and with a happy ending.  Like that of many operas, the plot is light duty: it takes place during the gold rush of California’s Sierra Nevada, and, to make a long story short, involves the sole woman at the mining camp, the good-hearted Minnie, finding true love with a bandit that her golden devotion is sure to reform. As a fellow audience member quipped about this light drama, sung in Italian and written from the remove of early 20th century Europe, “It’s the original spaghetti western!”
The lively production was directed by the renowned Harold Prince, with stage direction by Vincent Liotta; the evocative sets were designed by Eugene Lee, and the exquisite and convincing costumes were by Franne Lee. The vocal star was Deborah Voight, beautiful and believable in spite of her real-life maturity, among other well and lesser known performers, nearly all male. I also enjoyed the music–not just Puccini’s yummy score, but Lyric Opera orchestra’s performance, reliably and beautifully directed by Sir Andrew Davis.
There was, however, a blot on the afternoon’s fantasy, and one that might have been avoided. A minor character (though he stuck out for me like a sore thumb), Billy Jackrabbit, is described by Puccini as “a red Indian,” meaning, of course, a Native American. The first act takes place in the Polka, the bar and, and, as it were, community center of the mining camp. There, Billy’s role is to behave like a stereotypical drunken Indian, trying endlessly to swipe some whiskey, by the glass or by the bottle, for a little comic action; in a later setting, he has one more opportunity to celebrate alcohol, when he gives in to Minnie’s plea that he marry the Indian woman with whom he has a baby, and announces loudly, “After marrying, we get beads and whiskey!” He’s presented as a morally deficient drunk with laughably (literally) simplistic values.
The plot requires the miners to regularly voice their appreciation for whiskey as well, but alcohol addiction was not quite the problem for the miners of European heritage (“Anglos”) and their descendants, that it was, and still is, for those of American Indian ethnicity. Of all the stereotypes required to successfully mount an opera (or any stage drama for that matter), I wish the producers had had a bit more sensitivity to this particularly painful and destructive one. Alcohol use and abuse has devastated more than one Indian family, sometimes taking whole communities with it, and is a plague that was intentionally wreaked by the Anglos from the earliest colonial times to control the troublesome “redskins”who, it seems, may have widespread genetic susceptibility to alcohol addiction.
The producers of this opera could easily have played down the buffoonish portrayal of what is truly a sad, sick and unfunny stereotype without betraying Puccini’s plot or libretto. I rather wish they hadn’t missed the chance.
Full disclosure: One very old friend, of pure American Indian heritage, died in 2005 after a long, wasted life addicted to alcohol. And he is not the only one among friends I held dear who has died from drinking. Maybe my sensitivity is tuned too high. But it’s also the reason I understand how hellish an affliction alcoholism is.
Posted by Veronica Wald at 6:18 PM 3 comments:

And so did Johan Sebastian Bach, listen to his charming rendition of the last chorus of his Kaffee Kantata:
Bach's lyrics are so silly as to be nearly incomprehensible (especially when translated into English), but for the intrepid, here they are, in part.

And if you like your coffee wonderfully sweetened, just listen to Natalie Cole singing a little bit of Coffee Time:
Free music - Coffee Time

Here are the lyrics:
Coffee time
My dreamy friend
It's coffee time
Let's sing
This silly
Little rhyme
And have
A cup of coffee 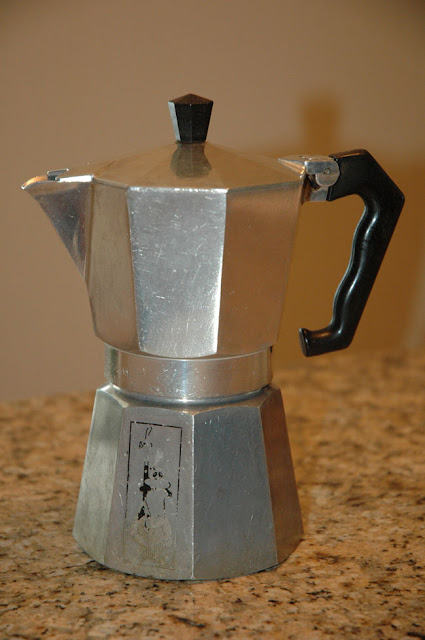 Posted by Veronica Wald at 9:00 AM No comments:

As much as I love beautiful scenery, mountains and water, geological wonders and amazing plant life (think minuscule flowering flora clinging for dear life flat to the ground at 10,000 feet and their distant cousins, the grandest sequoias) for me, nothing rewards the spirit  like watching "charismatic megafauna" (as referred to by those charged with managing both the wildlife and the humanlife that comes in droves to view, and sometimes get in trouble with it). At the top my list are the grizzly and black bears, wolves, and cats when I'm in the mountain west. At the top when I'm in Sanibel, Florida, are the Atlantic bottlenose dolphins. Like many other top-of-the-list, top-of-the-food-chain predators, they can be very difficult to view, because their element is not our element. Fortunately, though, like just a few other predators (e.g., bears and our garbage, wolves and our livestock) they are attracted by certain human activities. But unlike other wildlife, dolphins exhibit apparent curiosity about us and our water-going contraptions. In Sanibel this December, we took the best dolphin-viewing boat tour ever. Not that it's necessary to be out in a boat to view them--they're not hard to spot from shore for those who watch. A fellow beach-comber told me she was once very startled to see one slide up on the sand and then back into the water. This one was only, who knows, maybe 50 yards from the beach at lighthouse. 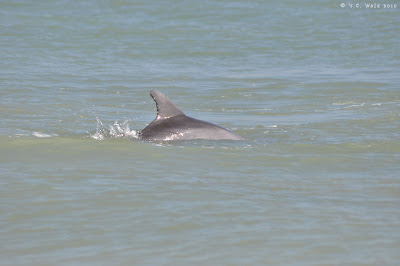 This one was a bit farther out. I hope all those people on the beach below the lighthouse were enjoying the show! 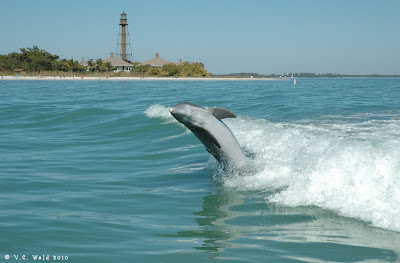 As the tour operators know, there are certain speeds at which the churning propellers attract the dolphins if they're not busy feeding (though that is also very fun to watch as they splash and roil around in a school of confused and terrified mullet, sometimes tossing a fish into the air before consuming it). As frequently depicted through history, dolphins around the world have always been interested in the disturbance humans and their vessels make in their watery world:
How could we believe otherwise than that this one was checking us out? 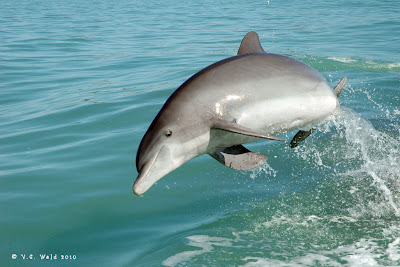 Why, exactly, they engage in such entertaining acrobatics in the presence of a foaming wake is not clear, even to experts.  It seems possible these intelligent mammals do it for joy. Note the one on the left is completely upside down: 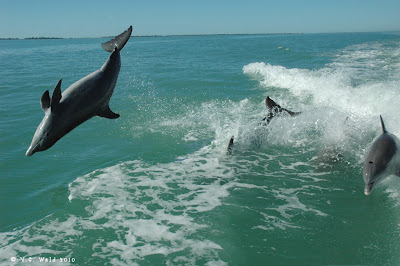 If you're built to withstand enormous belly flops, then this is for you: 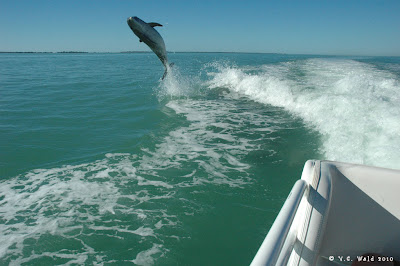 They even teach their children what do when the tour boats come through: 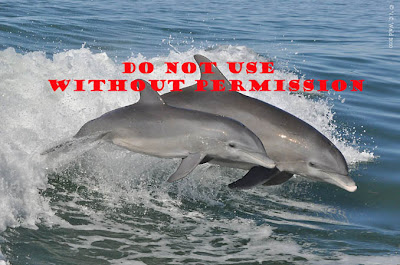 May its passing be not unremarked

I used to go through it like candy: Kodachrome 64, best slide film ever made. Now that it's no longer possible to get it developed anywhere on earth, many are sadly bemoaning its passing. And many would agree with me, that the colors and vibrancy of the images it captured were unparalleled: accurate skin tones, reds and blues, such sharpness and liveliness. Above are just a few scanned slides, muddied a little by age and repeated showings in front of a hot projector lamp, tweaked a smidgen with PhotoShop to bring back some of their original vigor. Click to enlarge and fully enjoy them. The camera  was a (very rare) split-focal screen Nikormat FTN, with 50 mm f2, 28 mm f2.8, and most wonderful of all, 135 mm f 2.8 Nikkor lenses (long before you could do all that with a single zoom). 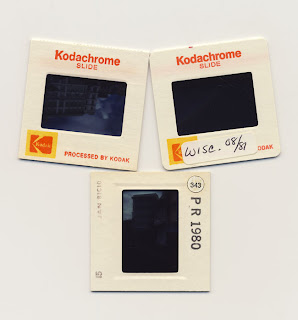 Oh yes, I do love digital photography. If nothing else, it's surely easier to organize my photos, and God willing, the images will falter less with time. The image below is among the very first I ever took with my digital camera, a Nikon D70, in 2004. 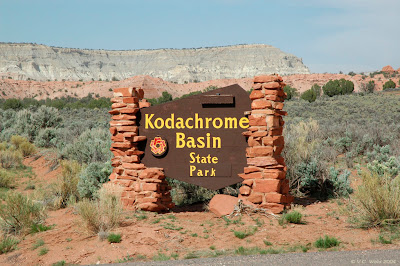