Friday night I attended "A Tribute to Norman Bradburn: 50 Years at NORC" at which the contributions of this great scholar, academician, administrator, teacher, and consummate colleague were recognized by the organization I work for, NORC at the University of Chicago. Pleasantly enough, the event coincided with NORC's 70th birthday. Congratulations both to Norman and to NORC!
The exquisite quote below, reprinted from a letter printed in The Saturday Review (1963), capsulizes Mr. Bradburn's philosophy about the meaning and significance of two broad areas of intellectual pursuit. In the use of the word "beautiful" he reminds me of no one so much as another beloved Norman in my life, Norman Maclean, about whom I have written several times.
"Specifically, I believe that the humanities are concerned with defining, illuminating, exemplifying (and guarding) what is good and beautiful, not what is true in the world. On the other hand, the sciences, including the social sciences, however imperfect may be their methods, are properly concerned with what is true about the world and not about what is good or beautiful except insofar as conceptions of the good and the beautiful are basic facts about people living in society."

Need I add that Mr. Bradburn is renowned for his studies of human happiness?
Posted by Veronica Wald at 8:09 AM 1 comment:

Why American health care costs so much

I've been waiting about a year for this post. On October 9, 2010, I had the pharmacist at Osco Drug (one of our local chains, similar to Walgreen's) administer my annual flu shot. The charge, in sum, was $26.99. I paid this out of pocket and submitted a claim for it to my health insurer, Blue Cross-Blue Shield of Illinois. It was rejected outright because Osco is "out of network." I knew that would happen, and was reimbursed instead from my health care flexible spending account (a handy little arrangement by which working persons can arrange for their employer to withhold an elected amount of pre-tax money from their paychecks from which to be reimbursed for certain out-of-pocket health-related expenses).
This year I decided the best revenge would be to get my flu shot "in network" and I just received my statement from the in-network University of Chicago Medical Center for $121.00 for services identical to those provided by Osco Drug. Of course the Medical Center had initially sent the charges to Blue Cross-Blue Shield. According to the statement, BC-BS paid the Medical Center $85.72 of that total. Compare that to the approximately (allowing for a little inflation since last year) $26.99 they could have paid had they been willing to reimburse Osco Drug. Or perhaps BC-BS would have preferred that I not have a flu shot at all (no cost to them!) and taken the chance that I wouldn't contract a case of the flu severe enough to require, say, 5 days hospitalization.
Oh yes, and the amount I owe the Medical Center is $35.28. By playing this game, $8.29 more comes out of my flexible spending account. It is worth it just to prove a point about the state of our medical insurance system in this country.
Posted by Veronica Wald at 3:14 PM No comments:

The 34th annual Chicago marathon was today; it was bright and sunny, the turning trees sparkling in a gentle breeze, and, alas poor runners, warm. Moses Mosop, of Kenya, won in a stunning two hours five minutes and 37 seconds; the first woman to cross the finish line was not far behind: Russian  Liliya Shobukhova ran 26.2 miles in two hours eighteen minutes and 20 seconds. Athleticism like that really excites my admiration. And by "like that" I mean anyone who can run, trot, walk or crawl, 26.2 miles in a single stretch at all.

In Chicago, all roads to the center of the city, where the marathon is run, are blocked off for hours and hours. I hadn't noticed the coincident date when I bought a  ticket to my first matinee in Lyric Opera's 2011-12 season, Jacque Offenbach's Tales of Hoffmann. The opera house is one block from Franklin Street, an appreciable stretch of the course of the marathon. Although Lyric avowed that the street closures surrounding the house would have been removed by the city a good two hours before the curtain was to rise, and they were, farther away from the house, between it and my route up Lake Shore Drive, plenty of real estate was still totally inaccessible by car. So I had to go all around Robin Hood's barn to get to the my favorite opera parking garage (also on Franklin), but it worked out in the end. This car was parked there along with the opera fans'. Go Mommy!! 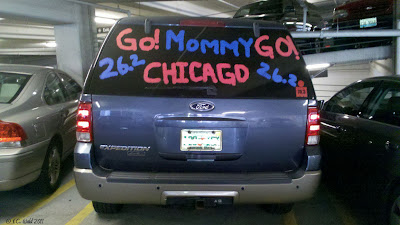 Oh, and the performance was fantastic too. You may not think you're familiar with the music of Tales of Hoffman, but you are. Click and listen through the snippets of music!  And speaking of athleticism, this was a performance very demanding of the cast (and very entertaining to watch). I can hardly imagine projecting one's beautiful singing voice to an audience of 3,500 people and dancing vigorously (and gracefully) around the stage at the same time.

Lots of aerobic capacity around this city today!
Posted by Veronica Wald at 7:31 PM No comments: 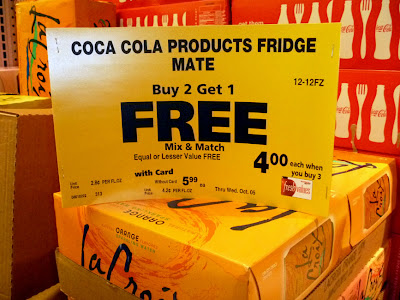