My poor brain is spread too thin among too many projects and happenings, both at work and at home at the moment, so I've not been at all diligent about recording thoughts and deeds lately. The good news is, when all else fails, there are always Web cam captures. This is this morning's view from Lake Butte Overlook in Yellowstone (in the dark distance is Yellowstone Lake with some of the park's iconic mountains hidden in the fog beyond) with a couple of elk cows resting in the newly-laid snow. 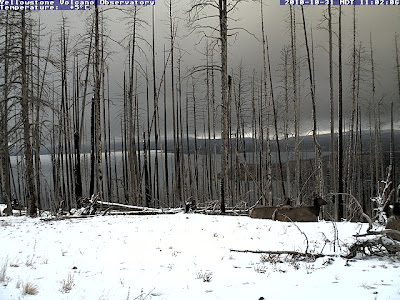 Here is a harem of elk cows, and one bull with a pretty good-sized rack at Mammoth Hot Springs (much lower in elevation than Lake Butte, thus snow comes here later in the season). The full swing of the annual elk rut is probably just winding down now, but the bulls still consider themselves to be in charge. Of everything. And here, the clouds parted on top of Mt. Washburn after the first significant snow storm this autumn, to reveal "ghost trees" encased in the white stuff:

And, happily, we still have blue herons regularly visiting Henry's Fork of the Snake River 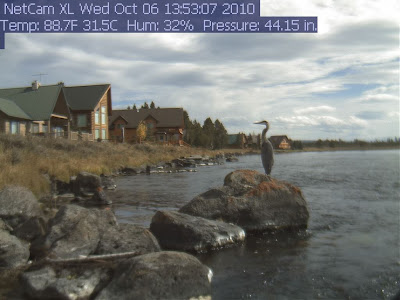 I really love the change of seasons, but this year autumnal weather has been very slow in coming to Chicago and other parts of the world I follow closely (namely, the Greater Yellowstone area). In Chicago, over the last day or two, the daily temperature has been at least 10 degrees above "normal" (which I take to mean average over as many years as measurements have been recorded). But this morning we had some clouds, some rain, some wind (it's sunny now) suggesting things to come. I'm eager to dig out my warmer sweaters and jackets, I'm sick of my summer duds! I also went through photos from an October 2006 journey to Quebec where we were treated to some truly glorious maples-in-transition. My professional association met at the O'Hare (airport) Hyatt this year, and while it was a good conference at a good facility, it didn't quite provide me with that feeling of "being away" like the year we met in Quebec, or last year, in Seattle.

As a friend who lives in the area reports on my favorite Yellowstone chat page,

"..after a mild October, the park should look much different after tonight. Winter storm watch up for the entire park right now...10-20 inches above 8,000 feet with 40 mph wind gusts this late afternoon/evening...6-12 inches in the 7,000-8,000 band, 2-5 inches predicted for Mammoth [the lowest elevation in the park, and so usually little snow accumulates there].  East of the park here [Cody, WY, dryer and lower than most of Yellowstone], they're predicting travel over the Chief Joseph [moderately high elevation highway between Cody and the northeast entrance to Yellowstone] will be impacted tomorrow morning with 9-12 inches of snow on Sleeping Indian [mountain]."

Sounds good to me! 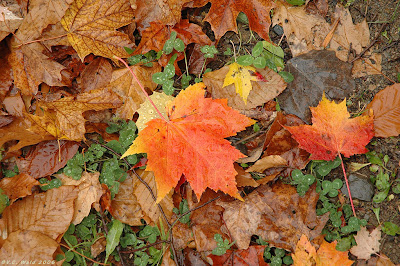 Taken on Ile d'Orleans, in the middle of the St. Lawrence River, just upstream
from Quebec City (2006) 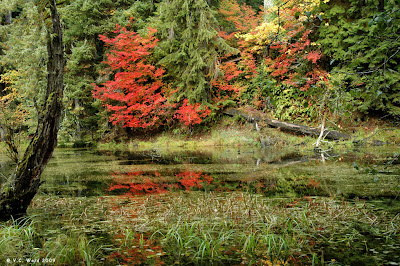 After all, it's only paper


One of my favorite blogs is Forgotten Bookmarks. The header on the site explains: I work at a used and rare bookstore, and I buy books from people everyday [sic]. These are the personal, funny, heartbreaking and weird things I find in those books. The blog is not signed, there is no author profile, and the store is also not identified. I would love to know more about the person who finds and celebrates for posterity these subtle little treasures!


As mentioned elsewhere, I recently undertook Part the Second of major household renovations that required all furniture to be moved (more on this subject later!). Thus it was necessary to pack away all the books on the shelves, which in turn afforded the chance for a little high-speed reminiscence. As I pulled the books I quickly spun through the pages in an effort to bring back memories as well to loosen a few years of dust prior to vacuuming and packing.  And of course, out popped a few forgotten (what else!) bookmarks. Although there wasn’t time to document their association with the books they were in (some doubtless for 20 or more years) like the Forgotten Bookmarker does, I did set them aside.  On the whole, they were a mix of aesthetically cute and ugly, but one was crashingly painful.It was a letter from my mother, dated September 3, 1977, typed on onionskin but well-preserved, folded inside a volume that I failed to note when I pulled it out. In 1977 she was living in San Juan near the University of Puerto Rico where she taught. She was 65 years old, an age when everyone tires more easily, and most are thinking of retiring. She acknowledges a postcard I sent her from Vancouver, bemoans the poor quality of photos coming out of her camera, and the stinky, pooping feral cats that took up residence around her terrace (because she kindheartedly fed them). Then she went on to say:

“This week went well although the load is heavy. I teach five courses. The extra course is to help me pay taxes, I think I’ll not teach beyond this year. [She in fact didn’t stop teaching until the mid-1980’s.]  The tax burden is more than I can keep up with. This month after I buy the two wedding presents, pay the IRS $200 estimated tax, pay the bank $174 on my loan, Raquel $200 rent, I’ll have just over $100 to buy groceries, gas, and entertainment, to say nothing of utilities. If I didn’t happen to have a few dollars left over from my trip to S. Am. [South America, for which she took out the bank loan] which I’ll use to live on I’d starve. I think I must sit down with my accounts and find out how much I pay in taxes altogether at this present salary and alimony and how much I’d pay if I accepted Social Security and food stamps plus using my alimony to flesh out the difference. I think I’m losing right now. So why work? Few people do in Puerto Rico these days,* yet all eat well on food stamps…I’m off to by some groceries without food stamps. Most of it cat food. I think we’re in for a rainstorm.”
At that time I myself was between jobs, but had the relative security of being married to a poorly-paid post-doc with a bright future. Although for many, many years, both while married (I went back to work about a month after Mother’s letter arrived) and for some years after I divorced, I was very underpaid and had to consider every dollar I spent, I never experienced the bone-deep financial anxieties Mother did. Clearly much of her fear was grounded in the realities of the moment, but another big part was born of her teenage years spanning the Great Depression and subsequent collapse of the security of her father’s once satisfyingly remunerative livelihood. In fact, throughout her roller-coaster financial life, Mother lived at least decently and safely, and had everything she needed, if not most of what she wanted, except the security of knowing her money would not run out. When I at last achieved the same position, of having everything I needed and most of what I wanted, one of the things I wanted was to help her. In her last years, I sent her a little cash, paid some of her bills, and made sure she had fun, if not exotic, vacations. But she never would take much from me.

*I don’t think she was sensitive to the fact that Puerto Rico has never had enough jobs to go around, especially for the lesser-skilled. Blindness to such understanding is certainly one of the less charming features of the classed society to which she belonged.
Posted by Veronica Wald at 10:25 AM 1 comment:

Ya'll may have noticed

I'm not posting very regularly this month. I'm happy to tell you, though, I have not died, but my modem did, last Friday evening, meaning I had, until Sunday afternoon, off-and-on-and-mostly-off mysterious connectivity issues that affected my whole computer in bizarre ways. By Sunday late afternoon I was completely unable to get on line. For an internet addict like me (plus which, besides conducting all my personal business like bill-paying and banking, I do some work work at home in the evenings and on weekends) that was a near-death experience. Finally the tech folks at the DSL provider I use figured out the modem was blown and brought me a new one on Wednesday. That was the fix in more ways than one.
Check back soon, I hope to fit in a little ordinary blogging between now and Sunday when I head off to a conference at (drum roll) the O'Hare Hyatt! Those of you who have experienced Chicago's airport will be sympathetic just based on how bleak that is, but in addition, the daily drive from home to the airport vicinity and back I expect to be long and not too pleasant. Let's hope the conference will be good enough to make up for the schlep.

Home Depot Does It Again 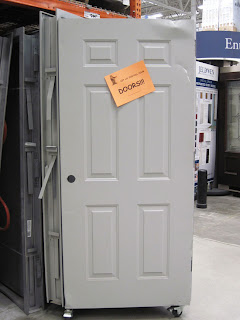 Taken at Home Depot today. There is more than one way to interpret the main message, so I leave that to you. As for me, I don't think I'll let them hang my fliers, either. 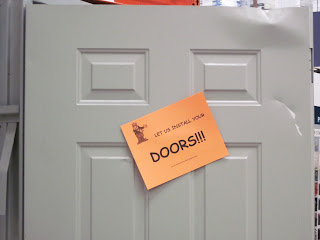