As much as we enjoyed the state parks of southeastern New Mexico, I can vouch that at least a few parks and reserves in the great state of California are as spectacular, or maybe more so, than any other state parks I've been to. I was fortunate, within a little more than a month of our visit to New Mexico, to join my friend LCB in San Francisco for a spectacular tour down Highway 1 along the Pacific Coast to Los Angeles. The weather was predicted to be cool and drizzly, so we reeled in our expectations. As it turned out, every day of the week was temperate, sunny, and, except for requisite morning fog many days, and a layer of drippy clouds one afternoon in Pasadena, beautifully clear for taking in the views.
Our first state park of the trip was Henry Cowell Redwoods State Park, near Santa Cruz. This is a modest woodland as redwood forests go, both in area and number of giant trees, but it is nonetheless a joy to see trees that were sprouts more than 1,500 years ago standing staggeringly straight and tall. The tallest is about 281 x 17 feet (at its base). The park wasn't busy that afternoon, allowing us to walk peacefully along the wide, duff-paved paths. 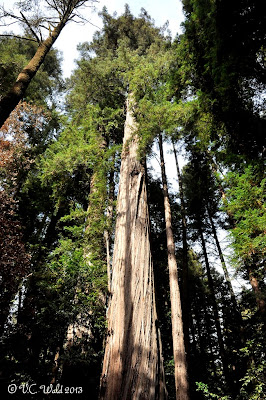 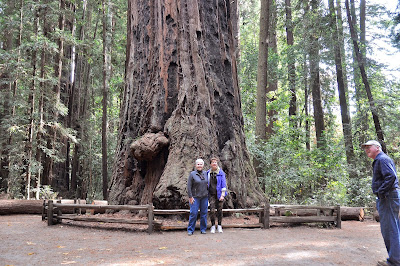 The area, coolly shaded by the gigantic canopy, has long been a tourist destination. Here, in the detritus of autumnal deciduous trees (particularly the fragrant California bay, Umbellularia Californica) that live trunk-to-trunk with the conifers (in the case of Henry Cowell, Sequoia sempervirens and the ponderosa pine, Pinus ponderosa), we found an early 20th century fire hydrant out-doing the colored leaves. While the hotels and campgrounds are no longer close by, this little guy, with his full history of changing colors revealed, is a reminder that the area has long appealed to tourists. 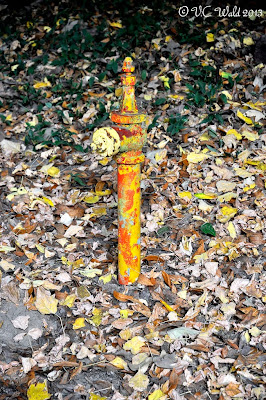 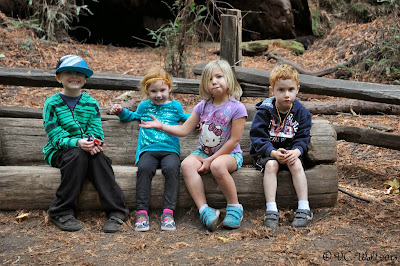 Not far from Henry Cowell, along the Pacific coastline, is Point Lobos State Reserve, set aside because of its historical whaling and fishing legacy as well as its spectacular scenery and abundant marine wildlife. It features this 1851 whalers' cabin, now serving as the Whaling Station Museum. As noted in the brochure, "[i]ts contents represent hundreds of years of occupation of Whalers Cove by indigenous peoples, Chinese fishermen, Japanese abalone fishermen, Portuguese whalers, and others." Its exhibits certainly bring home how phenomenally rich and important the natural resources are along that stretch of ocean. 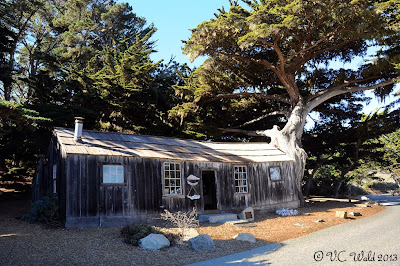 This is a quiet spot in the Cove below the cabin where moon jellies have drifted into the kelp (Nereocystis leutkeana). We had of course aimed to see sea otters, which make the cove their home, but it was not to be this time. 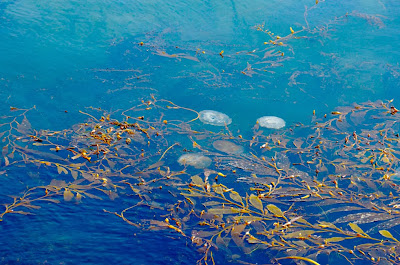 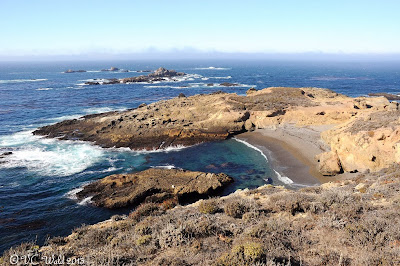 ...and typical California wildlife. These are harbor seals (Phoca vitulina richardsi), clearly enjoying the sun on a little outcrop close to shore. Not disturbed by the presence photographers and other polite on-lookers (and of course it's illegal to pester or harm them), they spend untold hours lazing in what look like terribly uncomfortable positions on the safety of offshore rocks. One unusual characteristic is their coloration, which varies from white with Dalmatian-dog spots to brownish gray to charcoal with white spots. Some even have a distinct bluish cast to their fur. 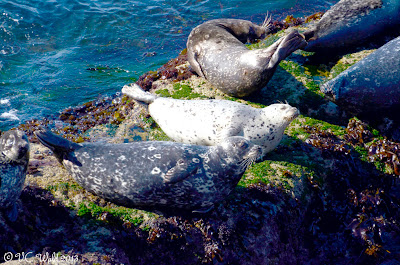 Farther to the south, near the little town of Cambria, is the Piedras Blancas State Park with its remarkable elephant seal (Mirounga angustirostris) rookery. The elephant seals spend half the year or more out of the water, shedding their skin and fasting on safe sandy beaches. When we were there  the females and juveniles had arrived; the males, with their exaggerated proboscises, were still out feeding in the ocean. Watching them was very entertaining nonetheless. 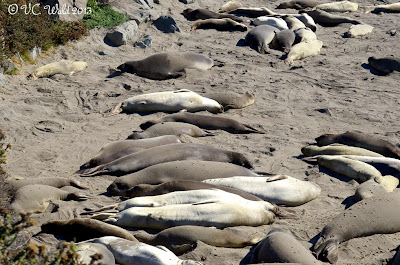 They hang out in enormous piles, mostly snoozing, snoring, and grousing at one another as they jockey for a comfortable place amongst the resting bodies between naps. Grumpy as they seem I think the one in the middle just told a good joke. 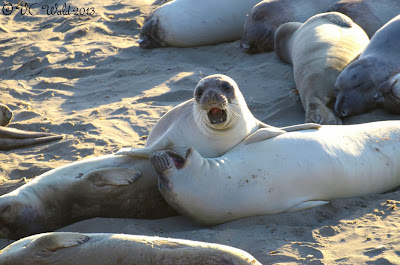 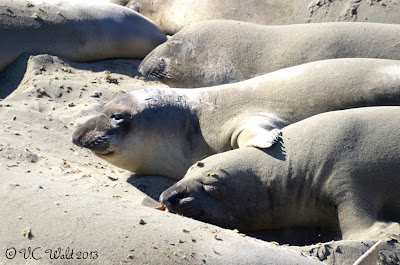 But would a friend flip sand all over your head? 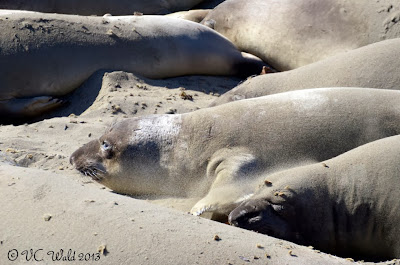 The viewing is wonderful and safe for all concerned. That's Piedras Blancas ("white rocks") lighthouse in the distance. 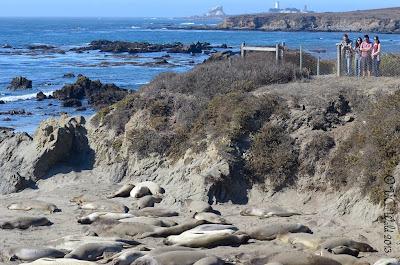 Posted by Veronica Wald at 3:08 PM No comments:

Curious Cat Walks Over Medieval Manuscript
Posted by Veronica Wald at 8:42 AM No comments:

State parks are fantastic too: Part I - New Mexico

As all my readers know, I'm a huge devotee of national parks; the ones I frequent are the American and Canadian parks, but there's no doubt there are plenty of equally fantastic set-asides for nature and history in other parts of the world, all therefore, by default, on my to-do list. But lest I give the wrong impression, many state (U.S.) and provincial (Canada) parks can be the small equals of national parks. I've blogged about the pleasures of Brown County State Park in my natal southern Indiana, but recently had opportunities to explore other truly remarkable state parks, all new to me.
As our ambitions to see Carlsbad Caverns and Guadalupe Mountains National Parks were completely knee-capped by the October 2013 government shutdown, we had plenty of opportunity to avail ourselves of particularly nice state parks in that corner of New Mexico. Not wild, but easy to love, is the Living Desert Zoo and Gardens State Park in Carlsbad.  It sits upon a small rise overlooking the basin busy with extractive activities, an oasis of regional plants (with the exception of the wonderful world-wide greenhouse of succulent plants) and wildlife. The animals, birds, and reptiles cannot for whatever reason be released to the wild, so it serves as their refuge as well. The view back towards town provides a good impression of the landform and makes it easy to picture how the area might once have been the floor of the Permian Sea. 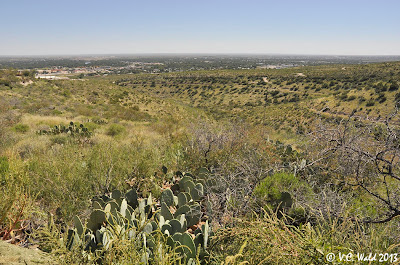 The Park's Succulents of the World collection documents the amazing variety of botanical adaptations to desert conditions like those around New Mexico, western Texas, and northern Mexico. Note KLK in the background there, for scale: 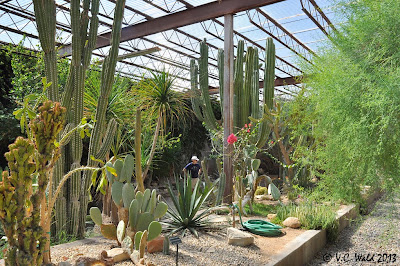 Sere though it may appear, the desert amply supports mammals large and small. Most endearing at the Living Desert is Mounty the mountain lion (Puma concolor). As is so often the case with attractive animals that end up in refuges, someone thought she would make a good pet. Although she apparently relates well to people, and did not flinch at the excited screeches of the little kids watching her, mountain lions don't do kitty litter, and they need a diet rich in animal protein and minerals that doesn't come out of a Friskies can. Mounty is obviously well-cared for at the Living Desert and was so much enjoying wrestling with her tough plastic toy that we could hear her loud purrs on our side of the fence. 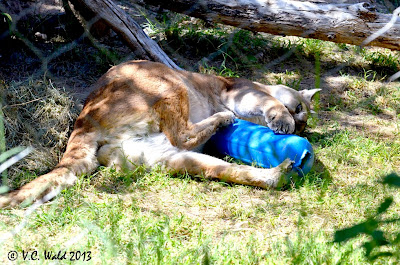 A creature that was new to me was the New Mexican gray fox (Urocyon cinereoargenteus). It was  skittish and, like a lot of wild animals, nervous about the big black eye of the camera following it around. 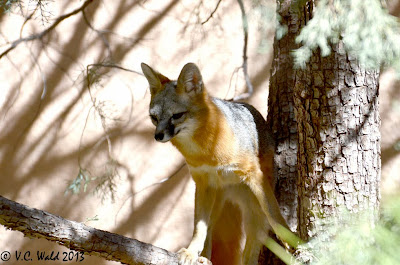 The fox maneuvered to avoid me, almost levitating itself high into the crook of the tree in its cage to get some privacy.  Although this species of fox, with its huge ears and tiny face, is more petite than the ubiquitous red fox, it shares the characteristic out-sized bushy tail of its vulpine brethren around the world. 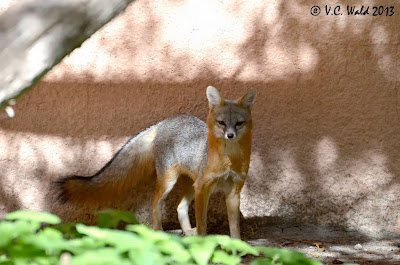 The Living Desert honors the local geology as well with this big gypsum outcrop glittering in the sunny landscape. 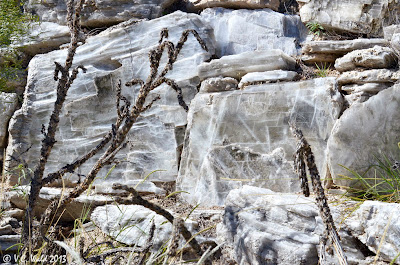 Gypsum (aka, selenite) has many commercial uses, including as an important ingredient in drywall, fertilizer,  cement and concrete, and is among the many economically important resources that the region yields. It's quite pretty in a rock garden too.
Of course the one thing we really wanted to see was the Mexican Free-tailed Bat that gives Carlsbad Caverns such scientific and ecological significance. Unfortunately, the Living Desert Zoo has no live examples, though they do have an informative exhibit and this odd, "somewhat" enlarged (maybe 4-½ foot tall) disembodied model with teeth better scaled for chewing up small children than the moths and other flying bugs the bats are famous for consuming. 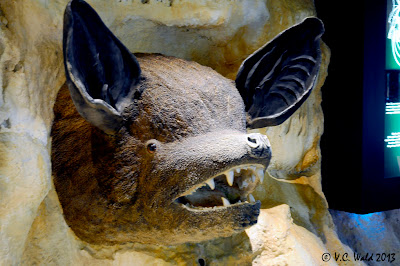 The geology of the region is endlessly interesting, as a visit to the little Bottomless Lakes State Park a few miles to the north in Roswell illustrates. Among the more informative descriptions of the "bottomless lakes" are Wikipedia's and New Mexico Tech's geology tour. The water-filled sink holes, technically cenotes, are collapsed caves fed by underground water sources, perhaps supplemented by precipitation, rare and scant as it is in southeastern New Mexico. One of the most interesting things about these deep (hence "bottomless") mini-lakes is that, due to happenstance of depth, orientation, presence or absence of shade from surrounding cliffs, algal growth/overgrowth, water levels, salinity, acidity and the like, the character of each is slightly distinct even from its closest neighbors. Some allow the survival of fish (stocked), amphibians, and aquatic insects. The avian silhouette is of course that of the ever-present turkey vulture. 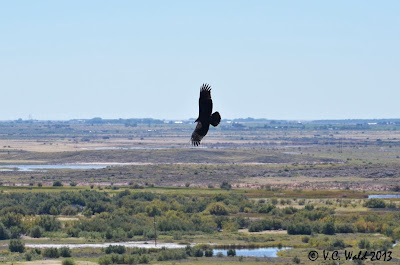 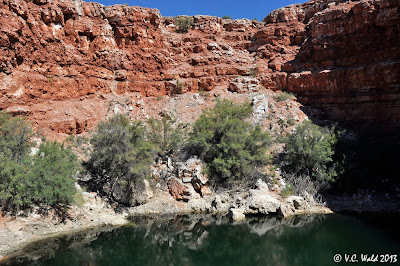 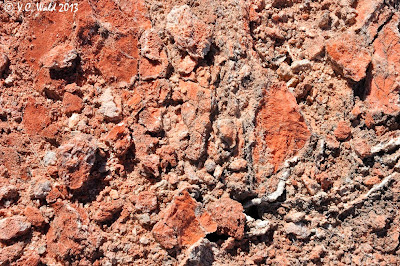 By contrast, Lea Lake is suitable for swimming and kayaking and I suspect is especially appreciated by the local people in the heat of desert summer. 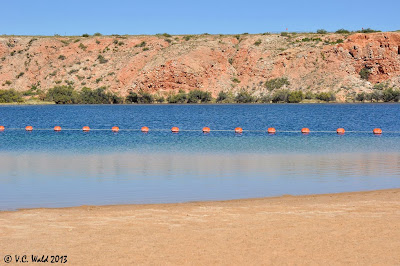 Beside Lea Lake is an impressively large and interesting Civilian Conservation Corps-constructed bath house and pavilion (built between 1935-1938 with that era's version of government stimulus money) which has been well-preserved by the state. 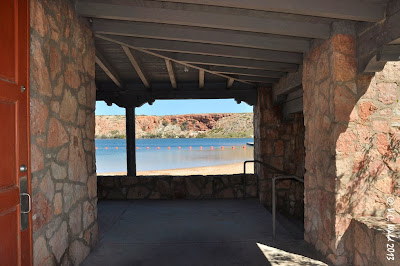 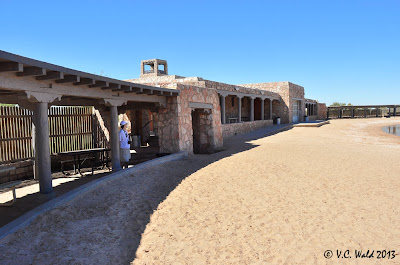 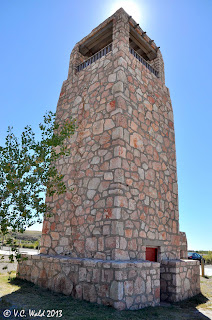 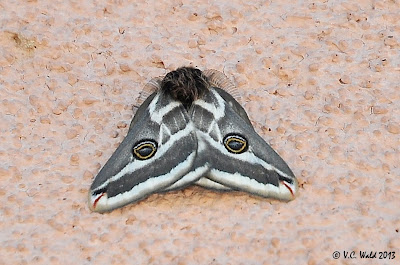 Last night (which was cold and clear, and completely dry) around 10:30 we heard loud sirens and giant air horn blasts. Got out the binocs to watch the sequelae of a weird and apparently not deadly accident on southbound Lake Shore Drive. A large Econoline-type van had somehow managed to flip on its side at an angle to the lane divider; we could clearly see its underbelly. Lots of flashing lights and firemen-types walking around, but in spite of the later arrival of an ambulance, it seems no blood and guts were shed. Finally the tow truck showed up, hooked a couple of lines to the top of the van, and pulled it upright with a little bounce. No people got or were pulled out so we assumed the passengers had long since gotten out safely. The tow truck pulled it forward a few feet, then a guy got out and emptied several bags of what I would bet was kitty litter over a small wet-looking area (oil? coolant?) on the pavement, then summarily left with his haul. Finally all the flashing lights ("looks like Christmas - red, green, yellow, blue" says Kevin) departed. Minor dramatic action but much more interesting than what was on TV.
Posted by Veronica Wald at 12:01 PM 4 comments: