Spring is on the way. Alas.

Some people think I'm a nutcase (KLK's exact words), but I in fact love winter, and with at least two distinct Polar vortexes this winter, Chicago, from late December until the end of last week, had its first real winter in years. It's been a quarter century or more, since we had sustained temperatures below freezing, day on day, week on week. We also had significant snow fall, which of course repeatedly messed up transportation -- bus schedules were simply abandoned in face of hopelessly piled snow and cars parked willy-nilly along the city streets -- and it made a total mess out of my car, which looks like a giant chunk of bacalao.  I thought all this crazy stuff fun.
It's all waning now,  with longer days signalling the earth's gradual tilt to spring. At least KLK and I found a most entertaining way to take advantage of the cold weather while it lasted. All along the upper Mississippi and many of its larger tributaries, instead of migrating, American bald eagles wait out the lean months below locks and dams, which keep the water from freezing over so they can continue to feed on fish. In late January, at the Army Corps of Engineers lock and dam at Utica, and across the Illinois River at Starved Rock State Park, the Illinois Audubon Society hosted Bald Eagle Watch. This view is from above the lock and dam. Impressive ice coverage! 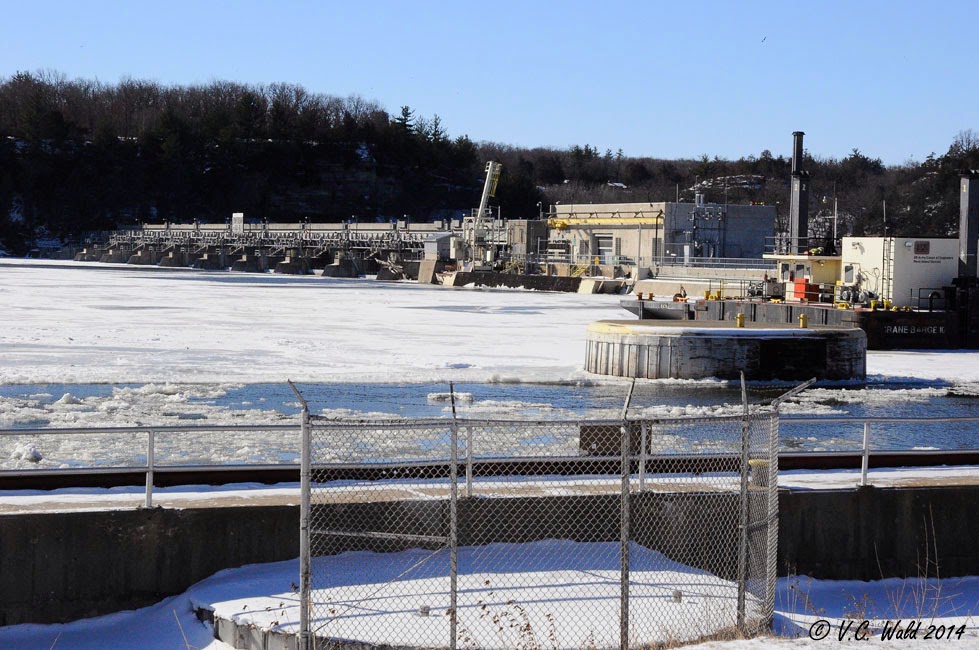 Below the dam is a different story, at least for a few hundred yards downstream. This is where the eagles soar: 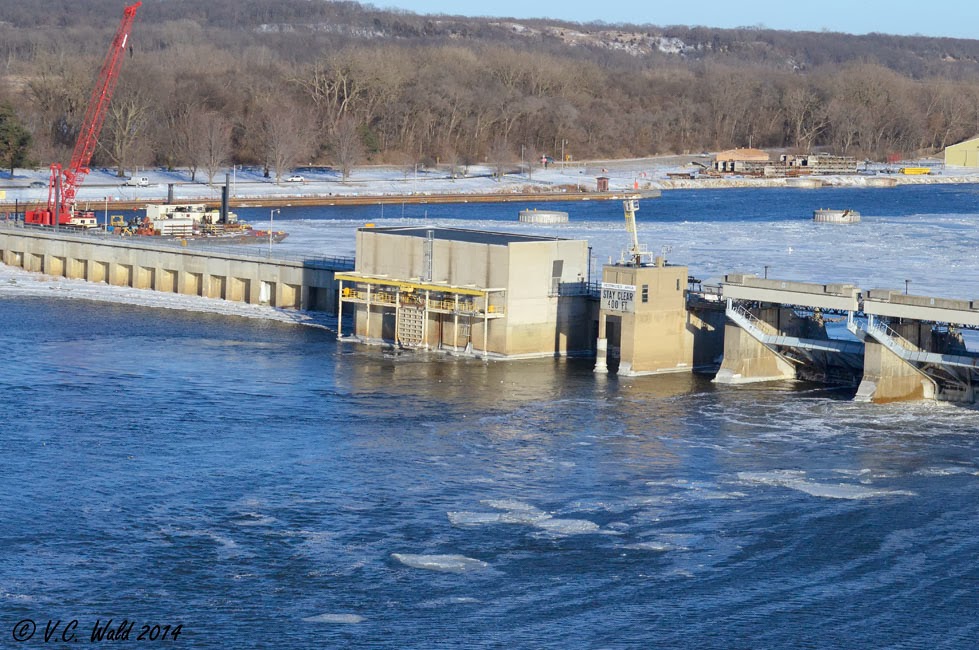 Unfortunately for the photographer (me), the width of the river made it difficult to get good pictures, just because of the distance to most of the action. But here's zoom in on an eagle with a good-sized fish in its talons: 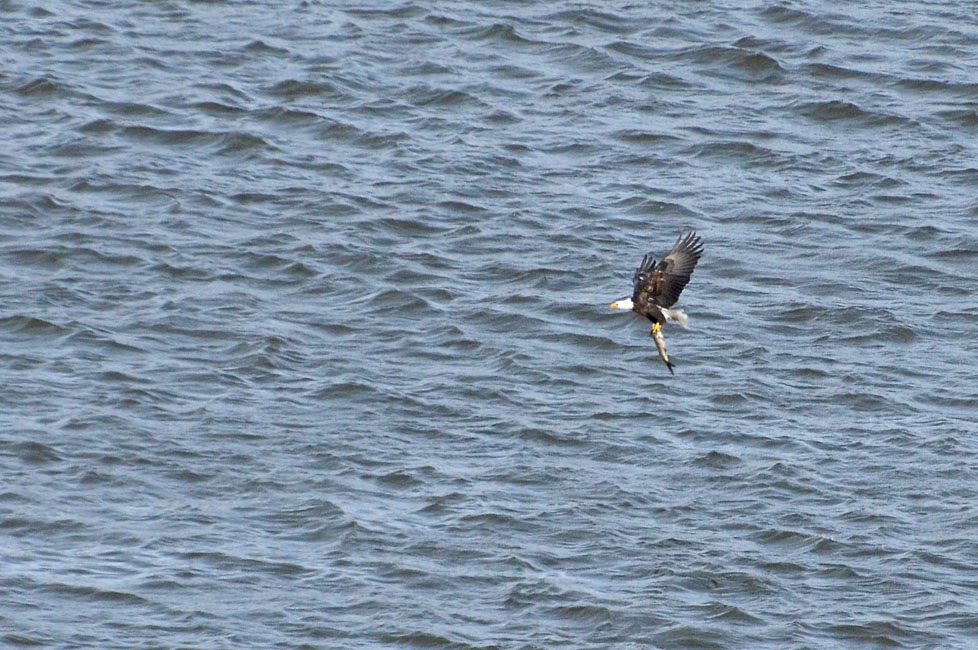 Looks like a satisfying meal for a 10 or 12 lb bird, but alas, it's a good thing my camera was on continuous shooting, because a wing beat or two later this happened: 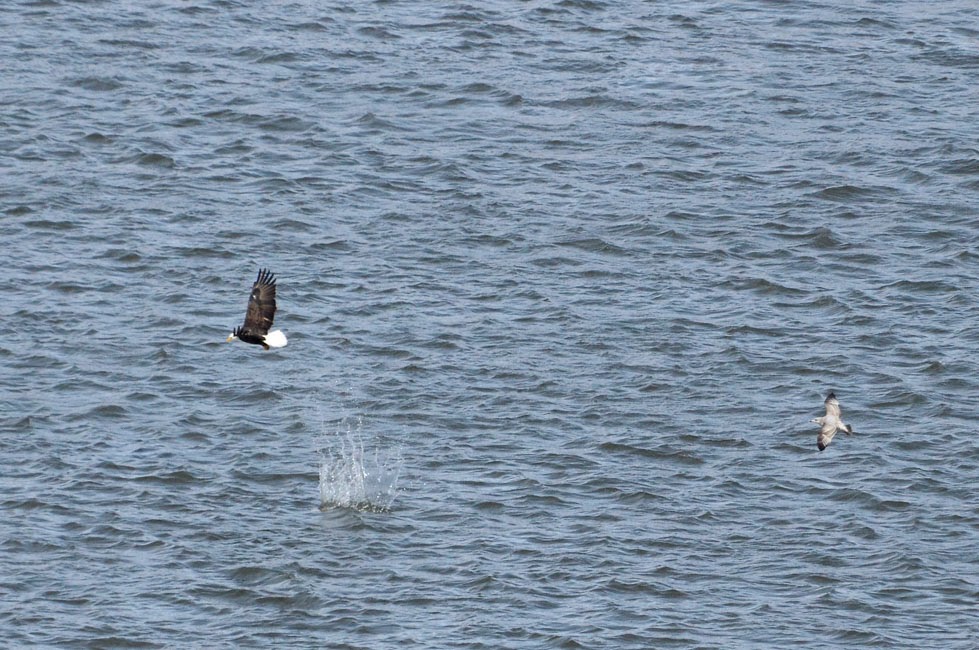 Life's hard in the winter, even around the dams. Maybe not so much for the gull, who was apparently anticipating this possibility. Who knows whether the fish lived another day.
But I did catch one magnificent bird on the wing from the vantage of a high bluff over the river: 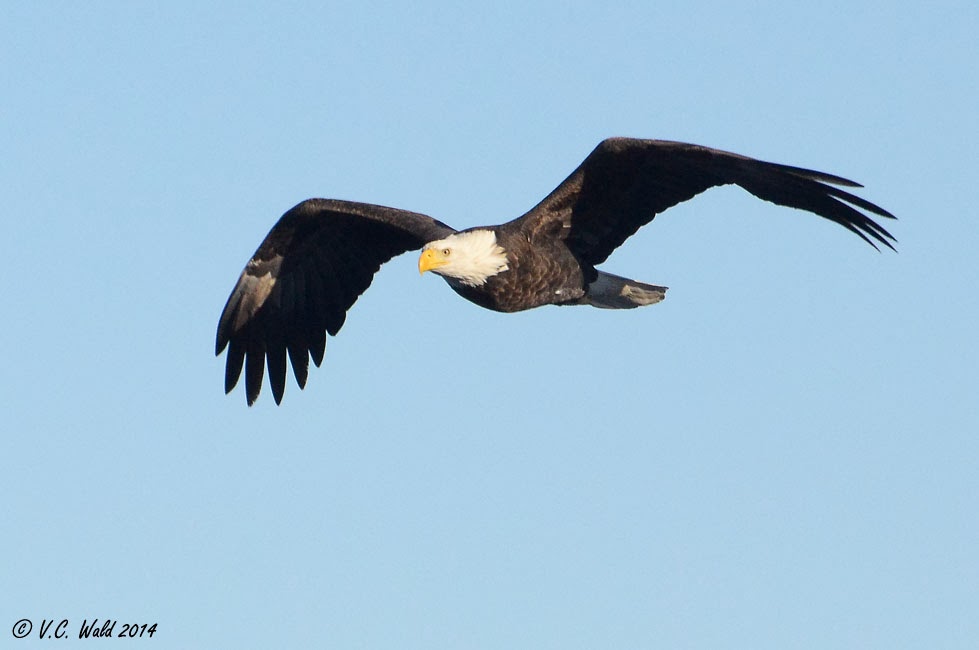 The trees on Plum Island, an Audubon island sanctuary in the middle of the river, were amazingly full of roosting eagles. Because of the distance and angle of the light coming through the trees, I have no good photos to share, but these Canada geese also availed themselves of the safe harbor, resting on the ice in numbers. 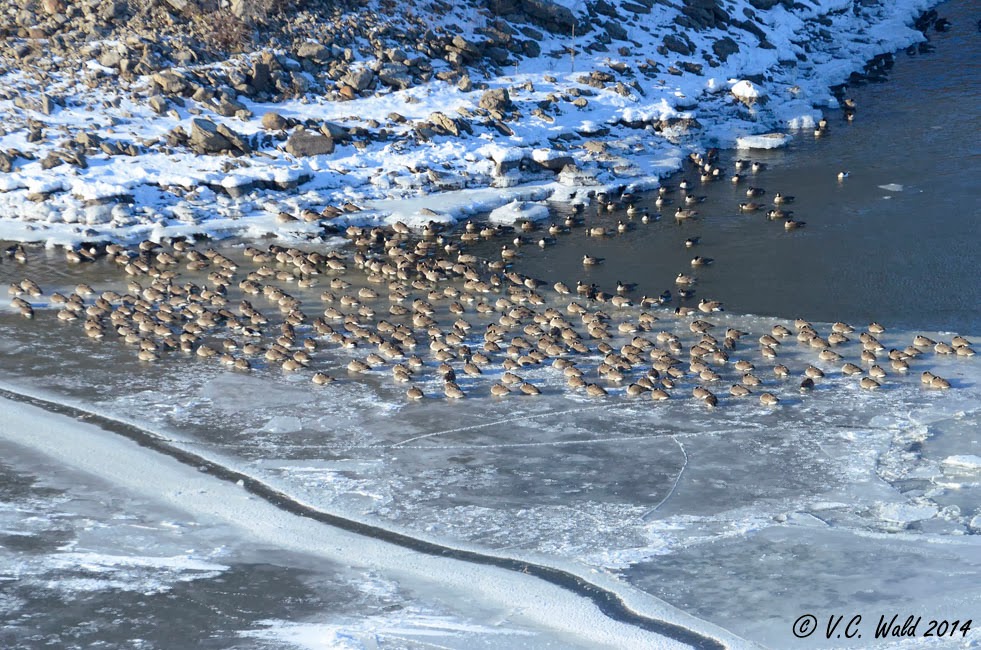 And this great blue heron also enjoyed the sustenance of the open river. 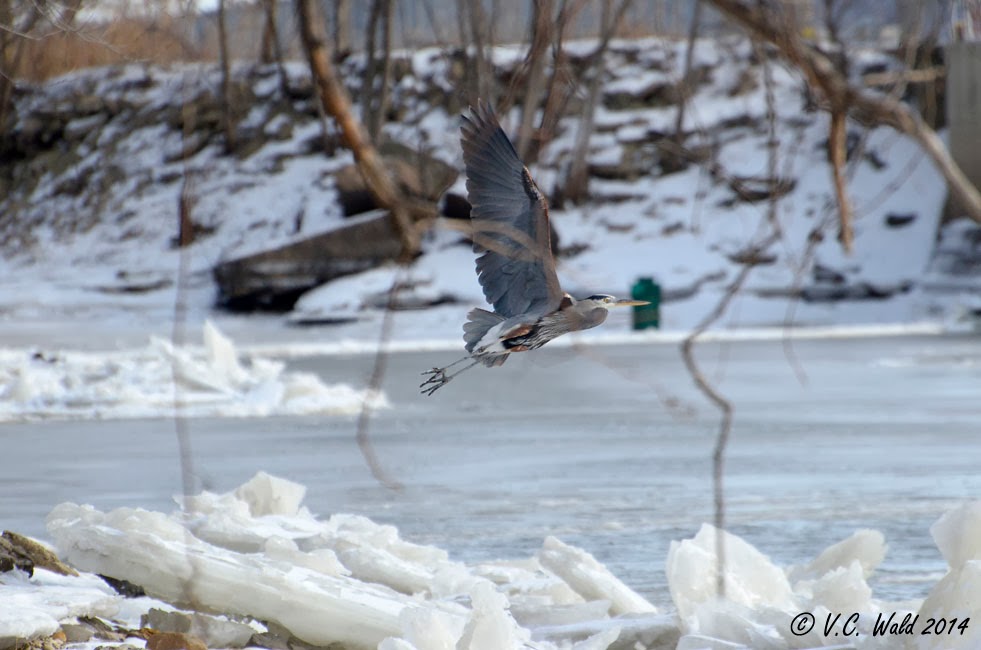 Littler birds, like this dark-eyed junco provided entertainment at suet and seed feeders in the state park: 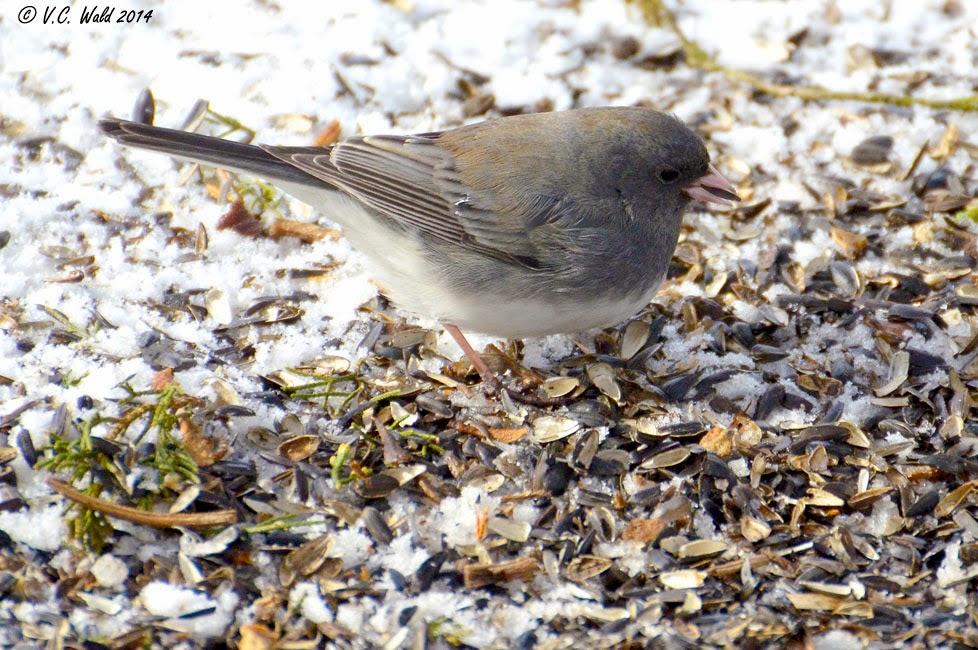 And this very cute tufted titmouse: 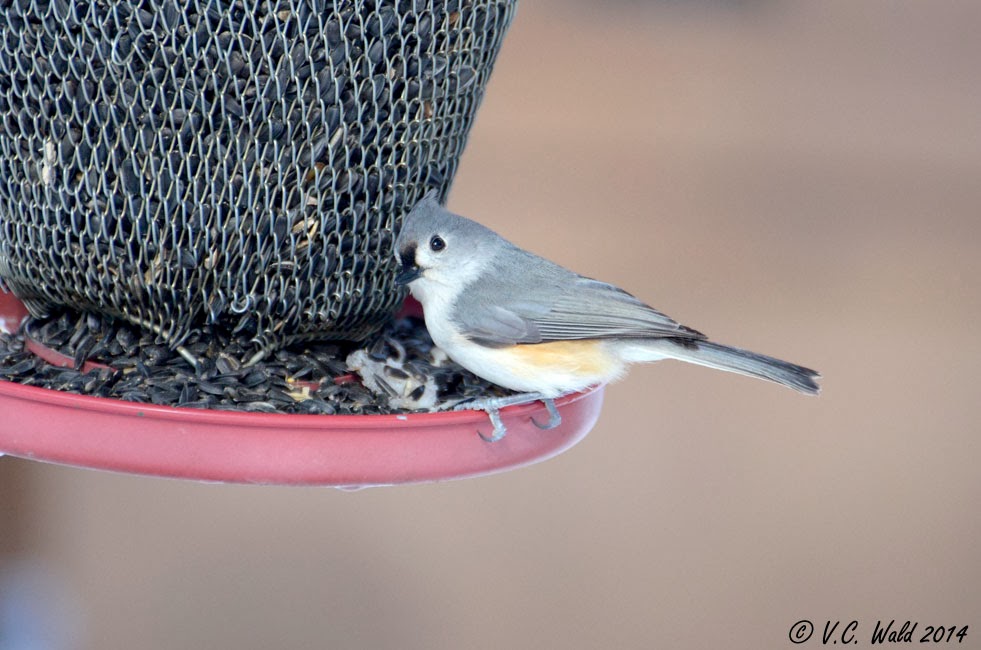 And the white-breasted nuthatch at the suet: 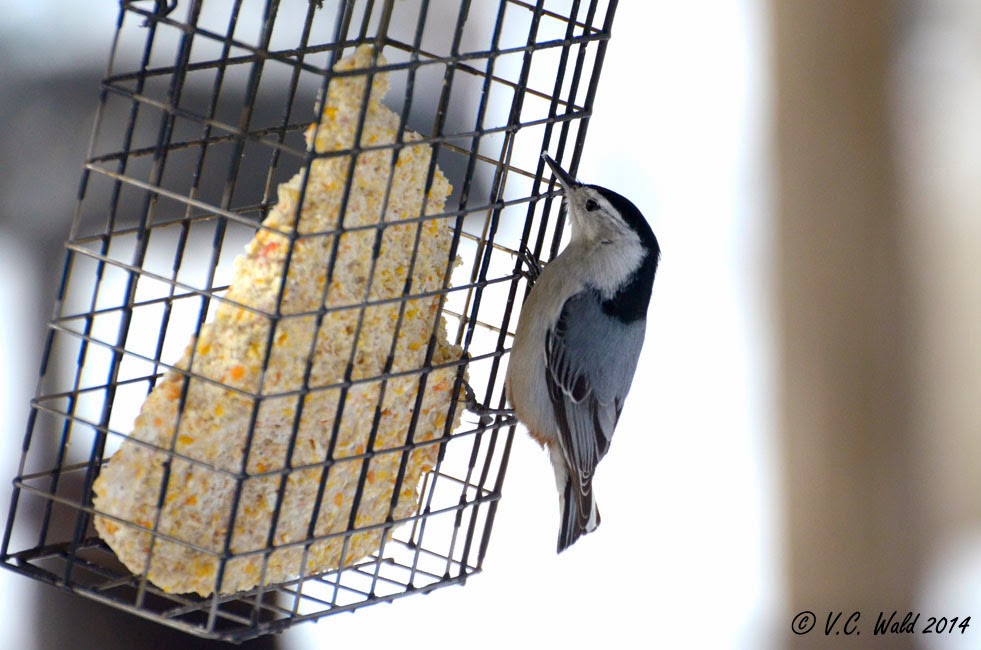 And the female down woodpecker, also working the suet: 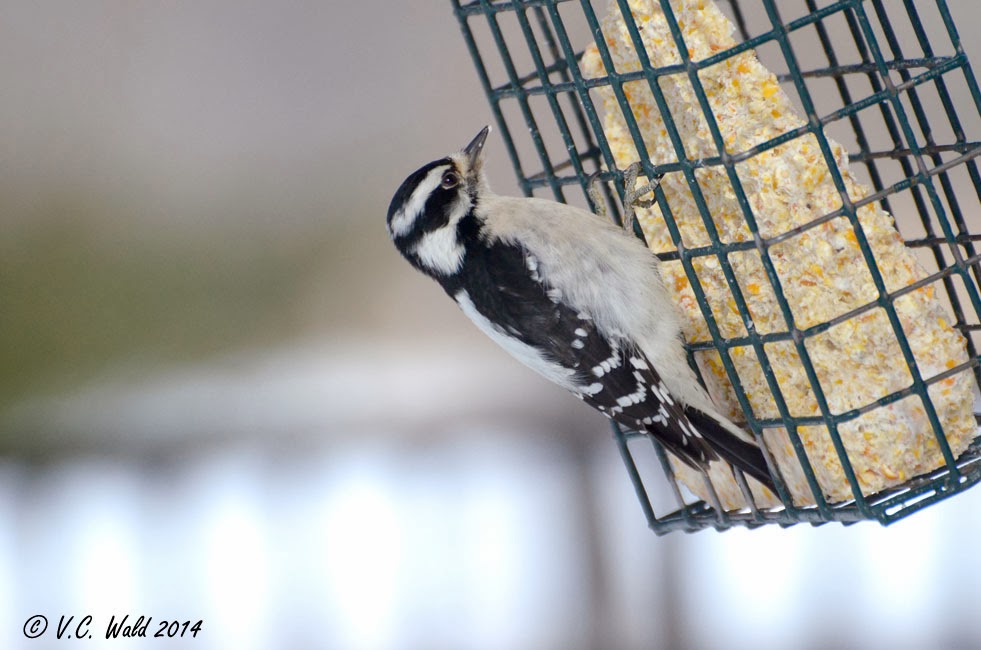 Here's a nice bald eagle caught by the waning sunshine as it flies past Starved Rock. 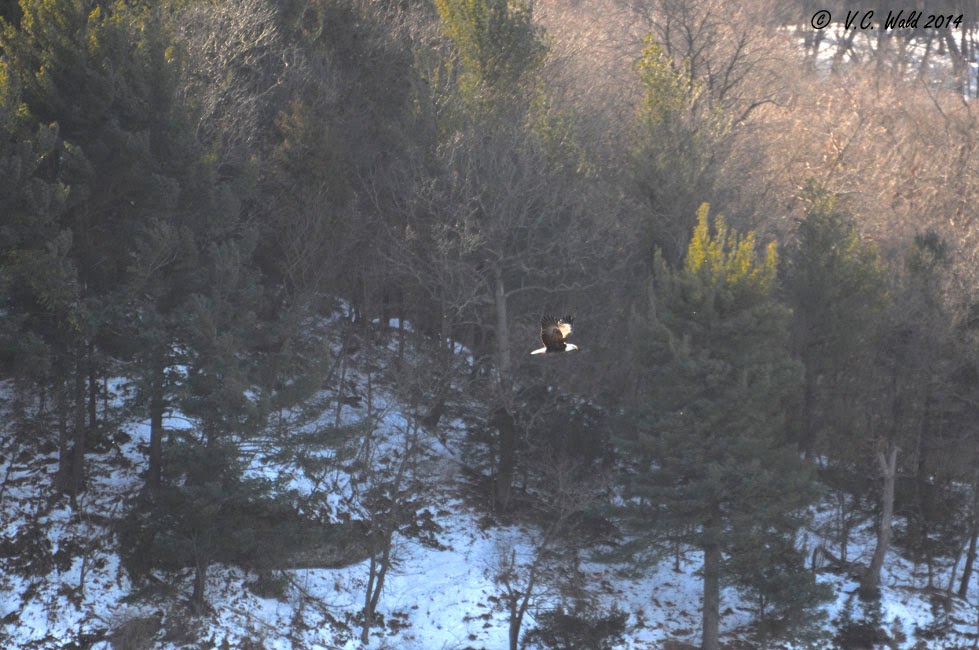 The story of our weekend adventures is to be continued... 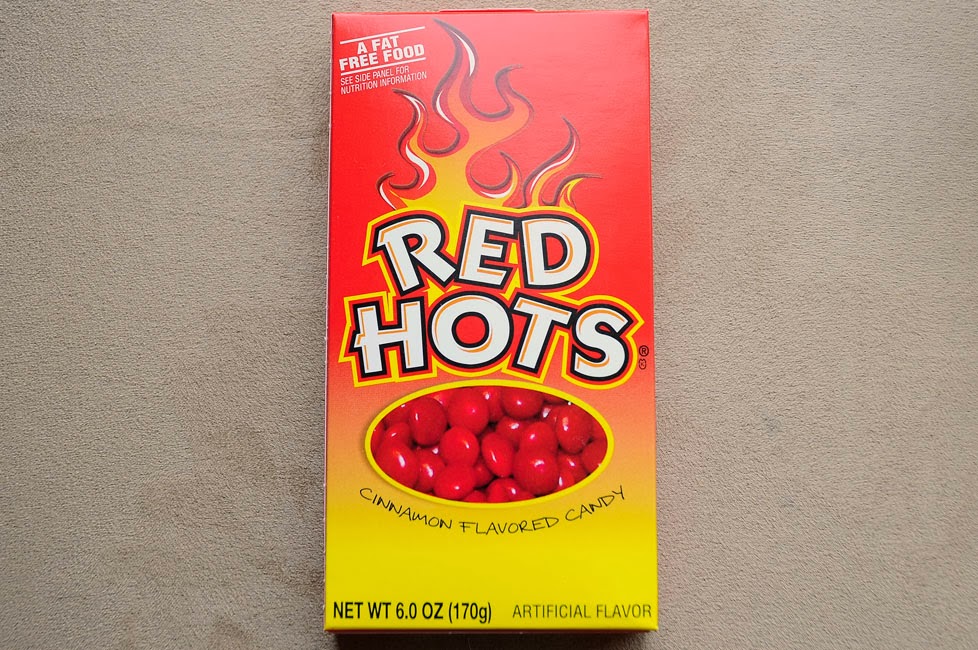 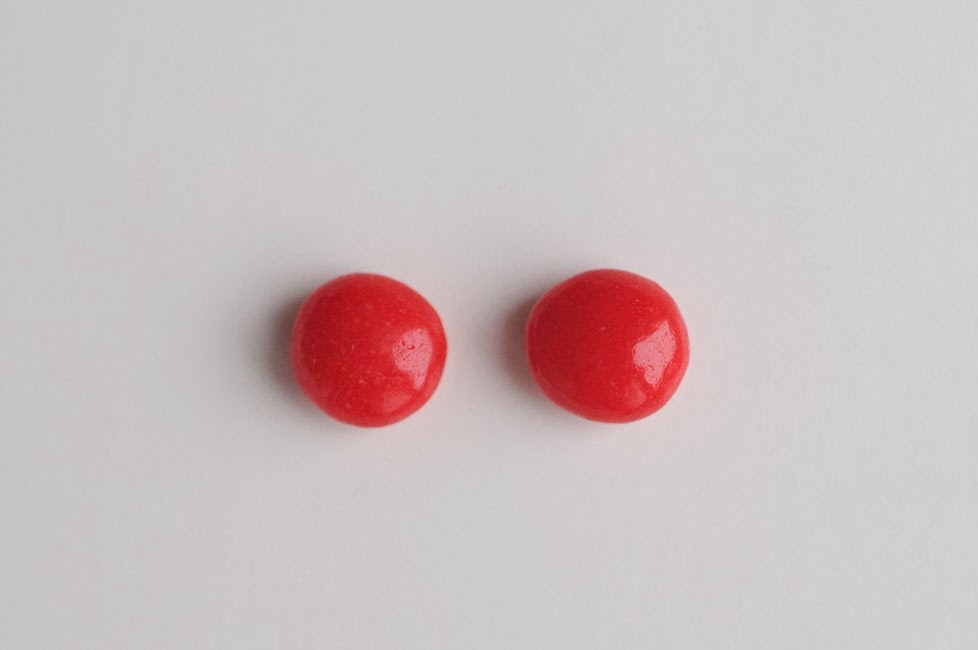 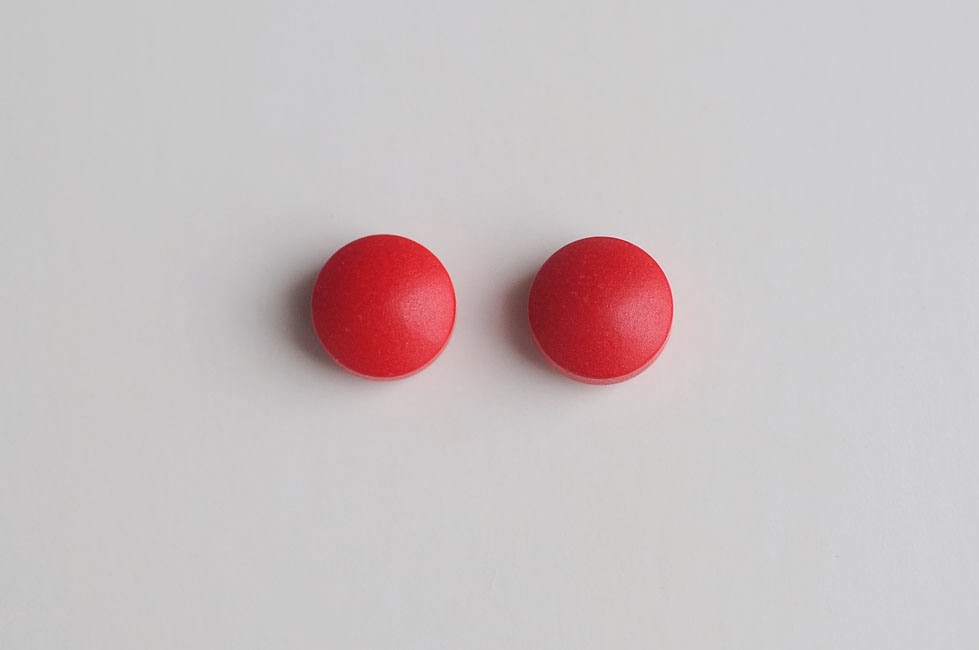 Tylenol! Shiny-red, pretty, sweet*, and and 7/16ths of an inch across!

2. The Problem
How is a little kid to discern the difference? Like Red Hots, the adult-strength pain pills don't come in a strongly child-proof container, just line up the arrows and flip off the cap: 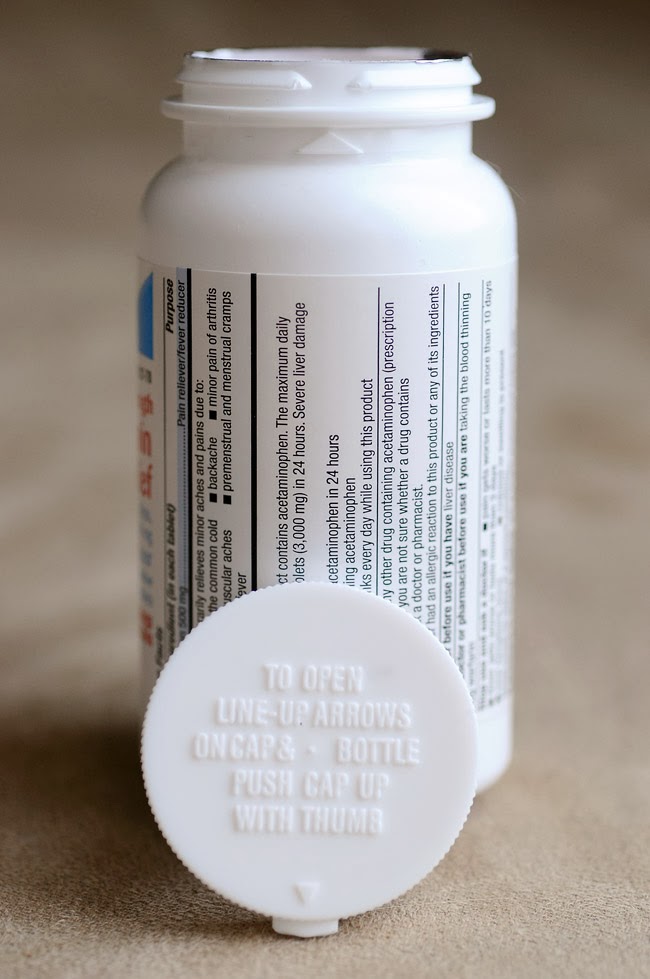 Awfully easy for a curious, dexterous child to investigate. 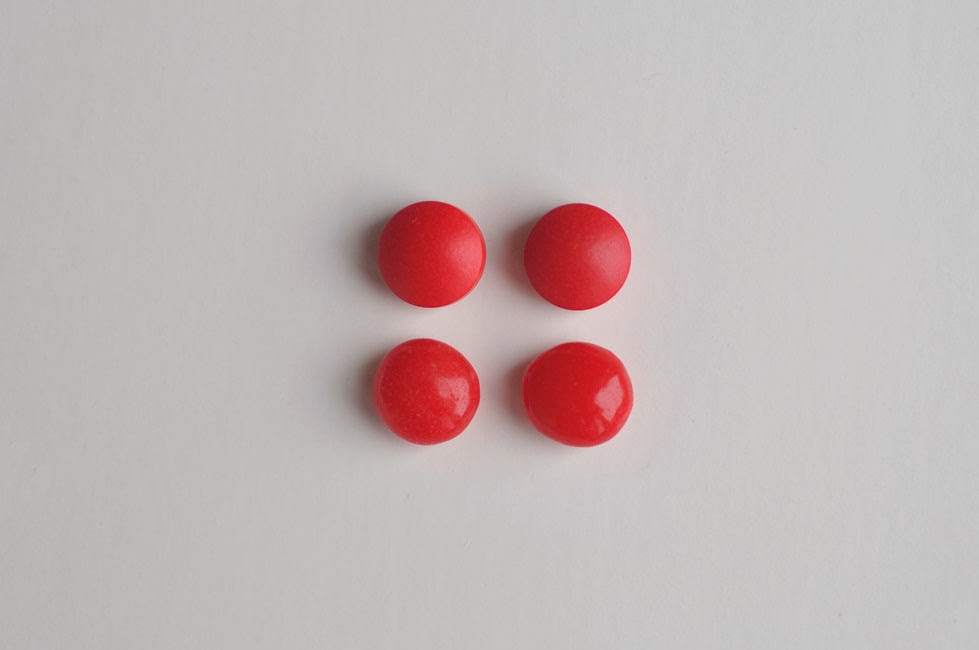 Could they be easier to confuse?

Given how toxic the slightest overdose of Tylenol (or in this particular case, its generic acetaminophen [fully intentional] look-alike) is, especially to a small child, and how ubiquitous Red Hots candy is, I believe the appearance and weak packaging of the pain medication is highly irresponsible. Red Hots got there first, it's the responsibility of McNeil-PPC, Inc., makers of Tylenol (and the makers of its numerous generic knock-offs) to find a distinct, and not nearly so charming, look for its popular pills. I'm not the first one to notice the similarity: packaging Red Hots in the guise of a gag "prescription for love" is an appalling misjudgement.
It's billed as a "lighthearted prescription." There will be no light hearts in a home in which a child comes to the conclusion that the pretty red pills in the Tylenol bottle in the medicine cabinet are candy. 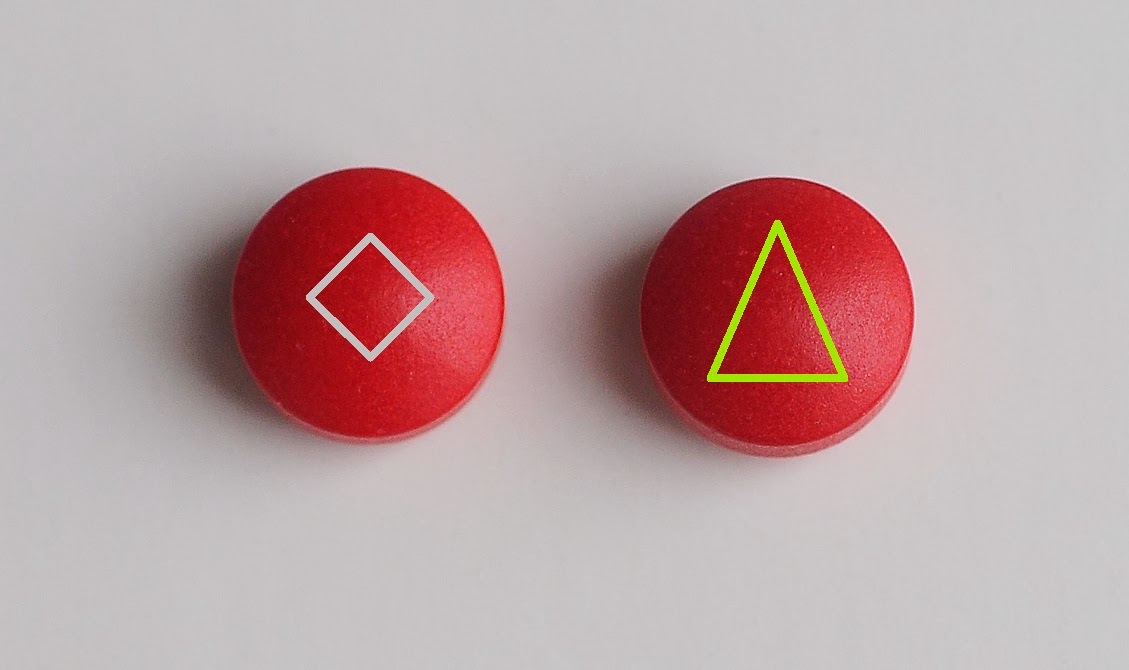 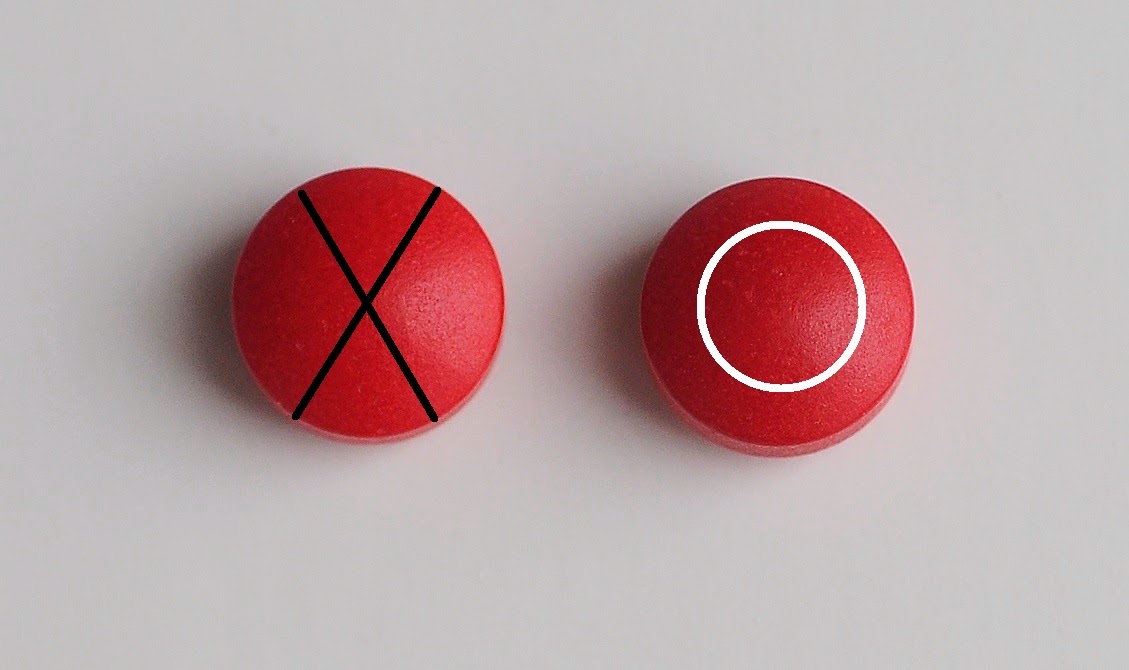 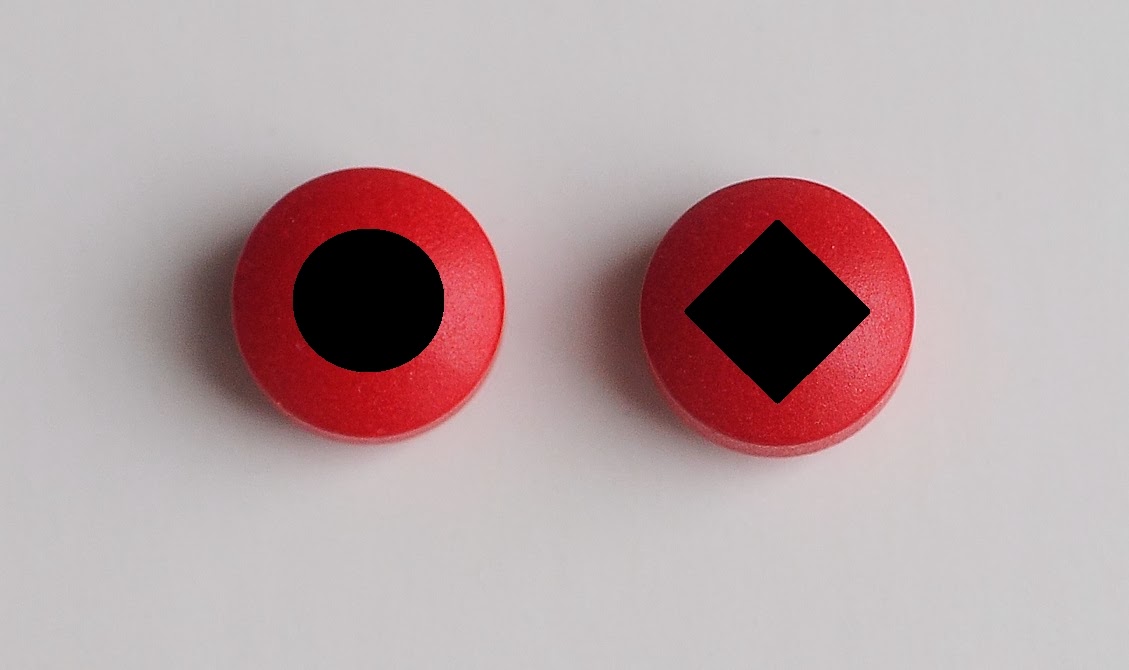 Simple, most likely very cheap and easy to deploy, effective for distinguishing a Red Hot from a pain pill, and possibly life-saving.

For much more, utterly unsettling information about the history of irresponsible marketing, and irresponsible FDA oversight of acetaminophen, I strongly recommend the episode, "Use Only as Directed" from This American Life, originally aired on public radio.

*Of its candy coating I'm sure; I put one on my tongue to test it out and although it's not a red hot, it's definitely sweet and entirely palatable
Posted by Veronica Wald at 12:00 AM 2 comments:

Why is it that, every once in a while, one's possessions spontaneously band together and stage an insurrection? This is happening with all my pot holders. For months, probably a year, who knows, longer,  I have enjoyed the trusty support of three, a once-pretty and slightly pricy pair made by April Cornell, and a solo known as Roo*ster that was an extraordinarily economical investment at Wal-Mart. They were all carefully chosen and hard-won. Who would have thought that finding presentable (by which I mean, "not so ugly that I can't bring myself to use them") and reasonably functional (by which I mean "don't allow the heat through and are flexible enough to wrap securely around hot objects") pot holders could be such a chore? The 'net and the world of kitchen accoutrements are full of inadequate versions, starting with the classy but ridiculously expensive: 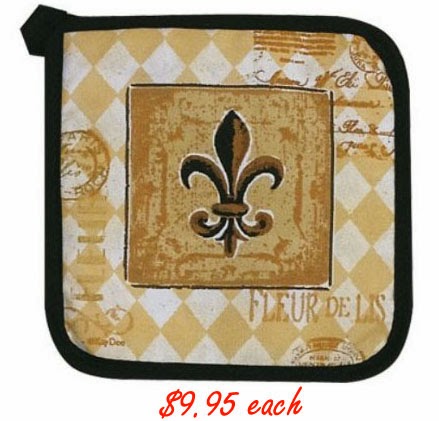 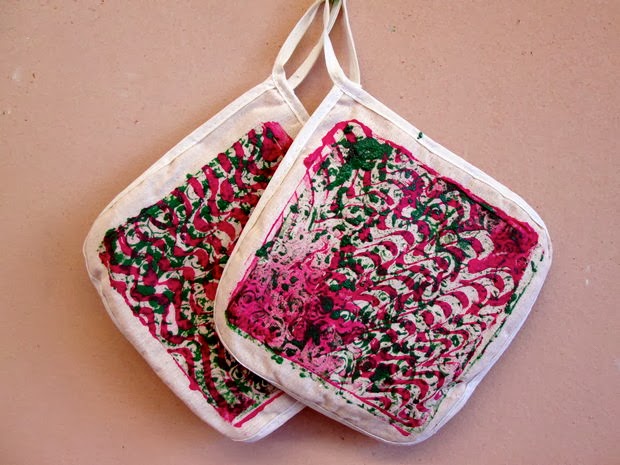 and the just plain ridiculous

Alas, good old reliable Roo*ster is on its last legs. It isn't obvious from this angle, but the business side, with its heat-resistant silver cloth, doesn't look so good.  I think one more trip to the washing machine and that will be the end. 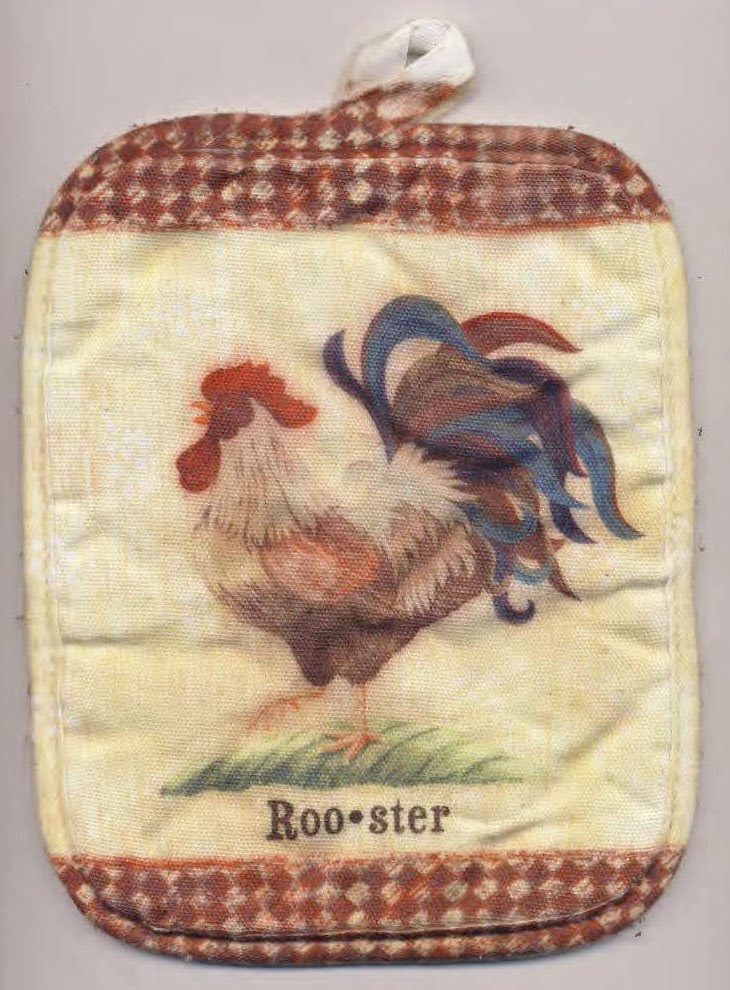 A once pleasantly bright and flowery April Cornell twin died an inglorious death recently, after accidentally being exposed to very hot grease right out of the oven (but my hand was fine, which of course is the whole point), followed shortly thereafter by an undignified explosion of its fluffy insulating guts. The remaining sibling is also losing integrity there along the upper left border. And what you can't see quite as easily is the apparently permanent incorporation of melted cheese (now weirdly hard like plastic) in the opposite corner and the other side. I fear it too will spontaneously burst apart upon contact with something too hot. 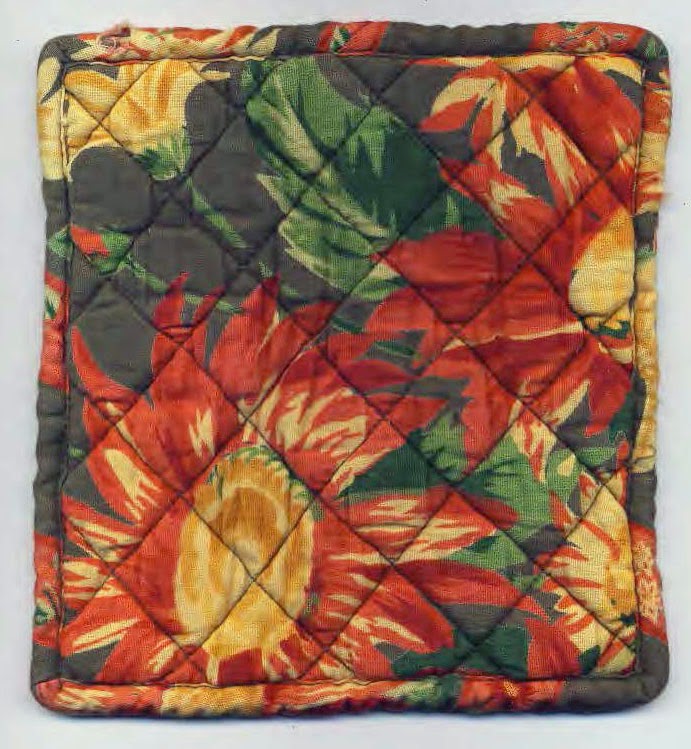 So given Chicago's unendingly inclement weather, I started an earnest search for replacements on the computer. Upon querying "pot holder" on everybody's first on-line shopping go-to, Amazon.com, I got highly useful returns such as this:

Apparently their definition of "pots" is broad.

Or perhaps a too punny.

In the end, I found a pretty new April Cornell pair on that other shopping mainstay, eBay: 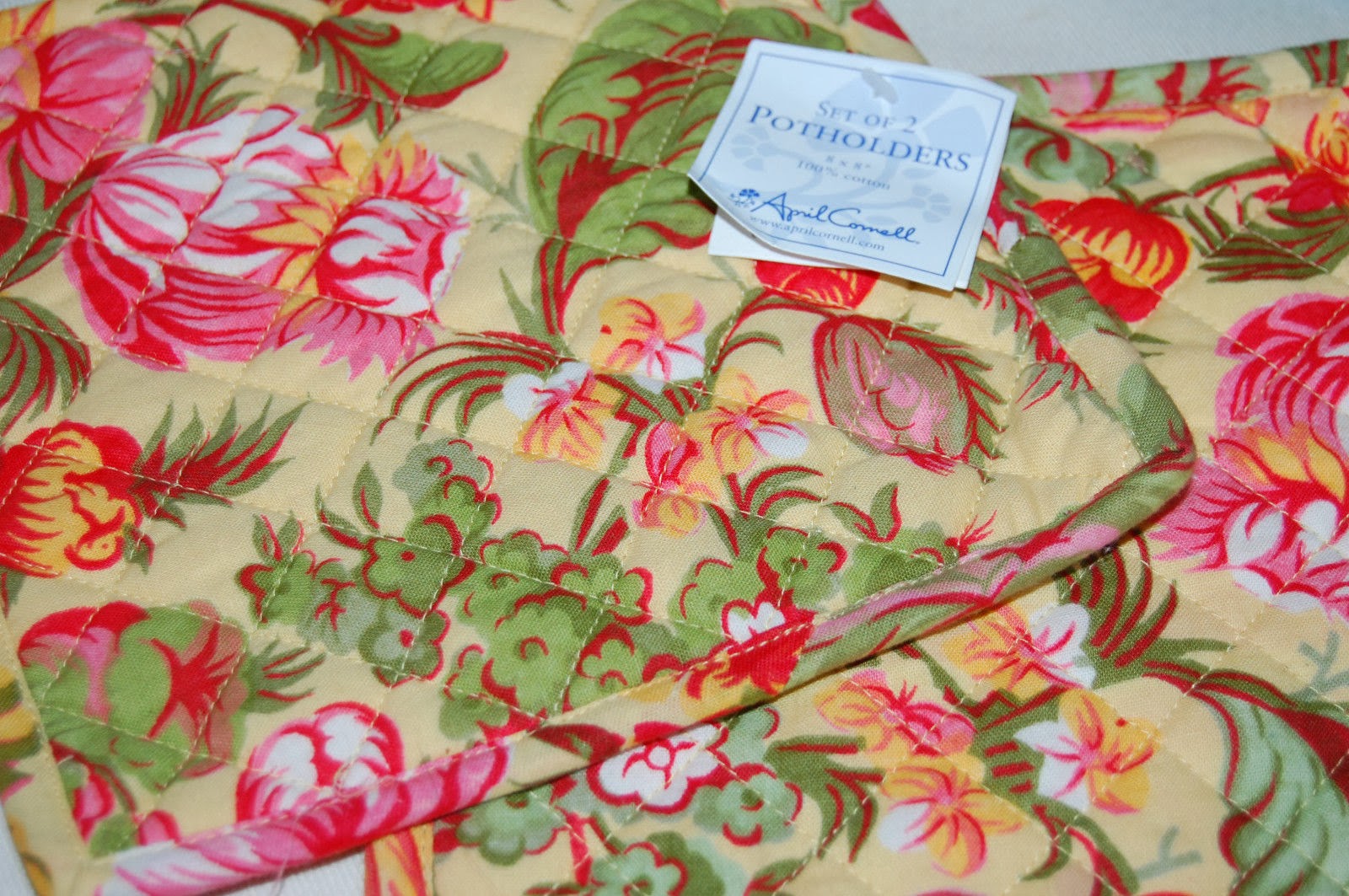 But, given my history, I'm not secure with just two pot holders at a time, so I kept looking until I came across another that greatly appealed to my well-documented feelings about bear country at the unlikely merchandiser of Blains Farm & Fleet (thank you Google, for turning them up): 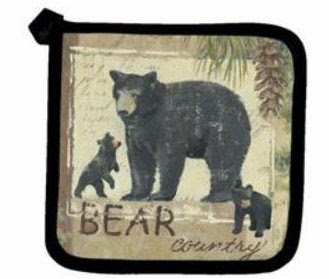 Neither has arrived; both were ordered an unseemly number of days (like 10) ago and both were shipped USPS. The storied United States Postal Service is, for reasons you can easily imagine (e.g., it's associated with the government), notoriously susceptible to the vicissitudes of weather, and we most certainly have had lots and lots of vicissitudes this winter. Let's hope one pair or the other gets here before total meltdown. Of my remaining pot holders, I mean. This being the first half of February in Chicago, meltdown of the 13 or 14 packed inches of snow on the ground is unlikely until March. 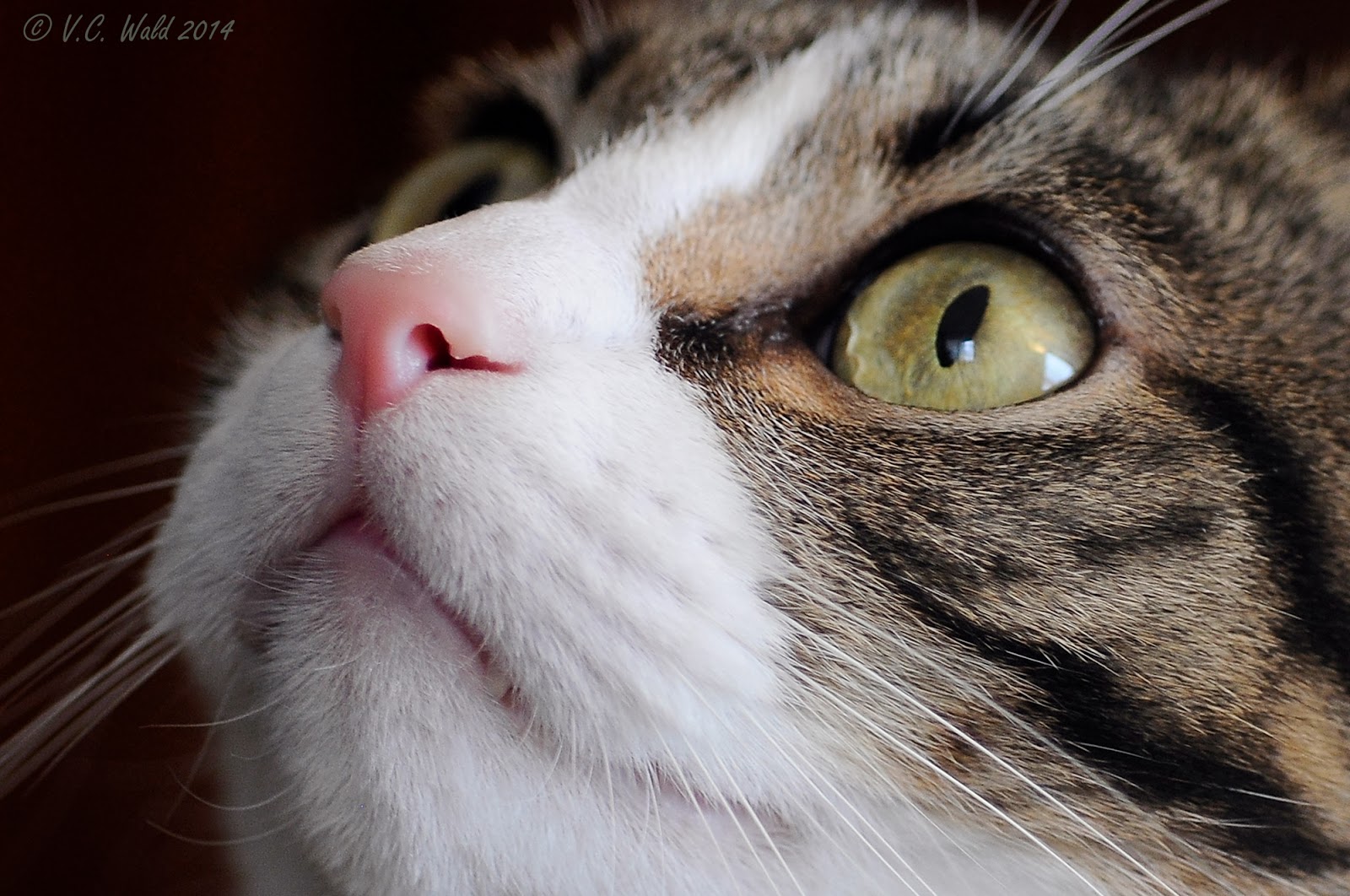 We haven't had a "Teddy post" for a long time. Teddy was a kitten when I found him huddled under a sapling tree very early one October 2009 morning along Chicago's lakefront, just 10 days after my beloved superannuated cat Winston, finally passed away. There are many posts about both kitties. Suffice it to say, we adored and mourned Winston, but Teddy has created his own world of love and fun, and comparisons with Winston's personality and physique yielded several blogs. To this day Teddy continues to be healthy, happy, robust, and endlessly playful. And endlessly hungry. He's had a good time this overly-snowy winter watching the big flakes snow globe around outside the window, as he is again today. He's such a good little addition to my life!
Posted by Veronica Wald at 3:37 PM No comments: