Stuff doesn't deteriorate much in relatively cold and dry climates like it does in places that are on average warmer and more humid; the detritus of life is difficult to get rid of under the best of circumstances, but extremely so in a remote location with limited transportation, permafrost a few feet down making burial difficult, and pristine clean air not to be sullied by burning garbage, all of which describe Churchill, Manitoba. With its seasonally swelling population brought on by the periodic descent of tourists, nature-lovers, scientists, film-makers, adventurers, and dependable influx of summer rail and dockworkers, all of whom add more than their share to the leftovers, Churchill has some big issues.  The wreck of the MV Ithaca, high and nearly dry in Bird Cove of Hudson Bay since running aground, is the biggest:
The story of the wreck of the Ithaca is a bit of a wreck too; it ran aground, in November of either 1960 or in 1961 (sources vary on this matter), following the loss of its rudder in one of those gales Hudson Bay is famous for. It was used as a freighter, variously stated to be under Greek or British ownership at the time of its demise. It has even been subject to the unlikely anonymous claim that it "...was originally owned by Benito Mussolini (the Italian dictator during World War II). After the war, when Benito didn’t need it anymore being dead and all, the ship was converted into a freighter." Although its silhouette is hardly that of a pleasure yacht, the name "Ithaca" might suggest that it was indeed a Greek ship. But by far the most credible story, at the Crannster Travel Blog, documents that the ship was in fact built in Quebec and operating under British ownership at the end. Funny the number of Apocryphal stories this one wreck as amassed.

By November 11, 2012, just a few days following the watery near-shore peek through the fog in the photo above, viewed from the opposite side of Bird Cove it's easy to see that the 50-plus year rusting of the Ithaca had been put on hold again by the arrival of this winter's ice: 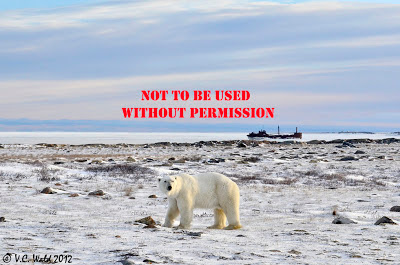 The prolonged annual deep-freeze slows down the molecular reaction that is rust,  doubtless largely accounting for the wreck's longevity. Churchillians and visitors make the best of it; in low tide, and presumably also when the shallow water of its grave is solidly frozen, it's possible to walk up to the vessel, although we didn't have the opportunity to do so. It's too fragile to explore inside anyway. However, another large metallic Churchill wreck, affectionately known as "Miss Piggy," is still in good enough condition to climb. 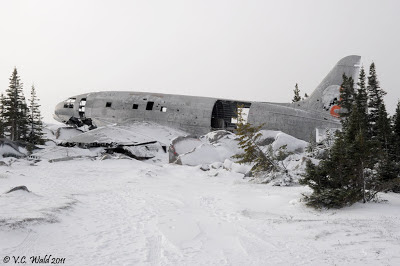 But first, someone (in this case, our guide, Jim Halfpenny) armed with a shotgun with cracker as well as live shells) has to circumambulate Miss Piggy to assure that there are no hidden polar bears in the vicinity: 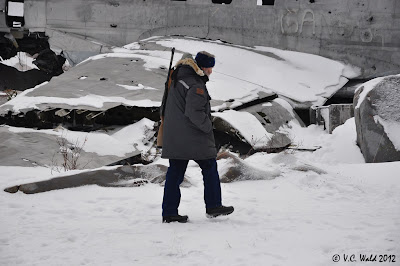 Then you can step right up, if you dare: 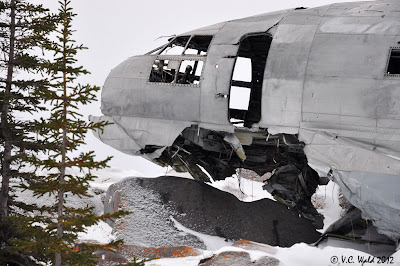 Miss Piggy is the hull of a Curtiss C-46F-1-CU Commando plane, which, like the Ithaca, hauled freight. She went down less than a mile from the end of Churchill Airport's (exceptionally long) runway, almost 33 years to the day before our visit. The history of this event is well documented; she was operated by LambAir, and was reportedly carrying cases of soda pop. Her departure was halted shortly after takeoff when an engine lost pressure and a wing clipped a power line; she came down on her belly on a rise with an excellent view of Hudson Bay below. The crew of three lived to tell about it. Now visitors are invariably taken to explore it inside and out.


For a wonderful rundown on many more plane wrecks preserved by the cold of the north, including more details and photos of Miss Piggy, see Ruud Leeuw's web page, Abandoned Plane Wrecks of the North.


The Ithaca and Miss Piggy are Churchill's most notorious hunks of junk, now embraced as local not-to-be-missed landmarks. But yet another non-functioning vessel, the Enterprise, most enterprisingly, has been turned into Churchill's version of a "tree house" with special appeal for kids who want to play sailor.Known to locals as Charlie's Boat, it's parked on the beach, done up with sturdy stairs and safety railing, for a fun fantasy experience. 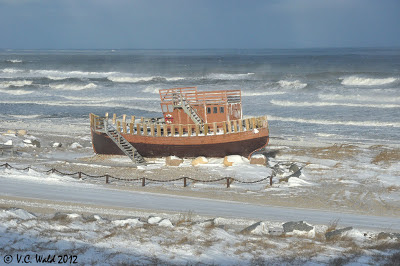 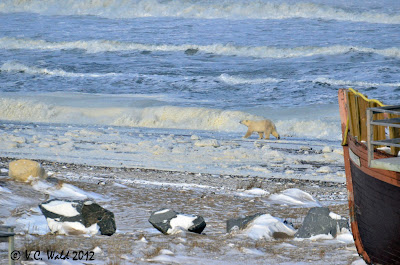 Note, however, even the town "tree house" must be approached with caution in polar bear season, when the fantasy might become just a little too unreal.


Alas, Churchill has a great deal more, far less appealing, large detritus that is not likely to ever depart. The many decommissioned buildings that the Canadian and U.S.militaries left behind on the premises of what is now the Northern Studies Centre, for example, could (and doubtless should) in be dismantled and shipped by sea or rail for recycling. However, it seems that until the value of the metal exceeds the considerable cost of deconstruction and transport to the nearest scrap metal facility (which could easily be hundreds of miles away),the ugly structures, built to resist corrosion in the first place, are likely to persist infinitely.


Then there's the ordinary castoffs of ordinary life: food scraps, the masses of paper that our cyber-lives produce, socks worn toe-less, hundreds of thousands of depleted batteries, electronics that no longer spin electrons around like they should, cans that once contained motor oil or house paint, construction debris, flat tires, medical waste, and unloved Coca-Cola polar bears:

Very much like the early days of Yellowstone National Park, at one time Churchill had an open dump that attracted curious, hungry bears like crazy. That made good viewing for the tourists. As long as they stayed in their vehicles, at least. But the "provision" of edible material to the wild bears was tantamount to baiting, which not only is completely unethical by today's standards, and of no benefit to the bears, but is also dangerously entrained the animals to associate the presence of humans with the availability of food. And incinerating the stuff disgustingly destroyed Churchill's otherwise wonderfully fresh air. The dump was at last covered up, though sufficient amounts of chaff from the grain silos at the docks still attracts desperate bears, of which we saw three or four at a time at the old dump site on our November 2012 trip.
After much consideration, discussion, debate, and negotiation, the solution seemed to be to find a structure capable of housing the trash until it could otherwise be transferred away; the dump was closed in 2006, and an old military facility was repurposed into a new, bear-proof facility, unceremoniously called "L-5", with bays for recyclables, hazardous waste, true trash, and a special repository for animal carcasses. Apparently the stuff is periodically shipped to Thompson, Manitoba, a small town in the middle of Manitoba. What happens to it there I have been unable to find out. 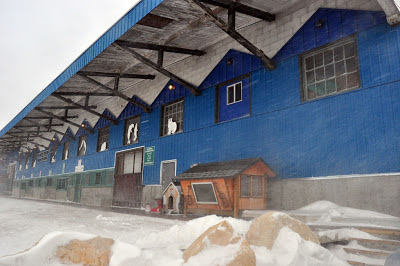 To make this long, and still unfinished story short, the tundra wasn't made for modern human habitation. We create too much waste, throw away far too much, and the environment there cannot absorb it. It's an ongoing problem for the people, and the bears, of Churchill, and the rest of the world.

Posted by Veronica Wald at 5:38 PM No comments: