We found Teddy in the oven 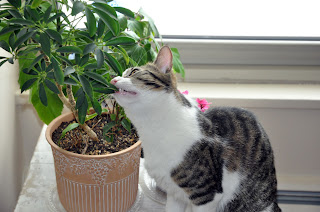 Cat-proofing: It's a major effort in this household. Teddy, who is now between 9 and 10 months old, has grown into a sometime holy terror of teenage-ness. He loves attention of any kind, typical adolescent that he is, whether it's positive or negative. The evidence suggests he doesn't cut up much when no one is watching, but when there's a witness, well, look out!
My electric oven has a fan that continues to run after then oven is turned off, presumably to cool it faster. Since the noise of the fan is annoying, I often leave the door ajar to speed the temperature drop. It has a stop at about 35 or 40o, and fortunately, when the door is open the light inside is on. The other night, about an hour after dinner, KLK called me frantically to the kitchen. There, resting happily on the top rack of the oven, was Teddy. When we yanked him out, our hearts in our throats, he was nice and toasty and quite puzzled as to what all the fuss was about. [I did not want to wait the 25 seconds it would have taken to grab the camera. Teddy's ability to get himself into potentially fatal situations is beyond my limited human imagination.  I was very upset.] 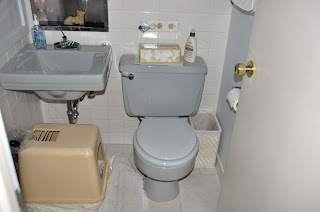 Ever since Winston was this age, we've kept the toilet lids down. That's because little Winston so much loved to play in the toilet that he would squeeze himself between the seat and the closed lid so he could reach inside to splash. After a few years we could leave the telephone books off the toilet lids because he finally learned not to even try to lift the weighted lid. We've not abandoned the habit of putting the lids down on the toilets in both bathrooms (his and ours) however, and it's a good thing, because Teddy likes to drop his toys into water too. 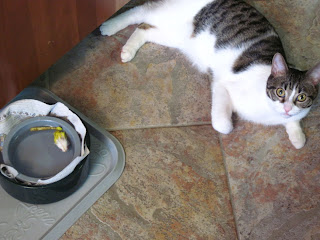 Now, you may notice something else a little odd about the bathroom view above. Yes, the tissue box is upside down. That's because it's so much fun to extend your claws into it and dig up the nice, soft, shreddy tissues! 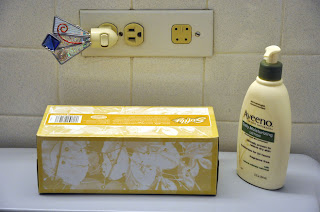 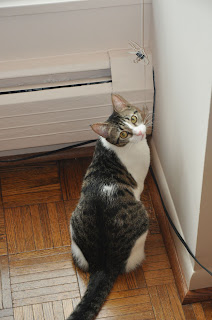 Batting the mini-blind cords is also extremely entertaining. At all windows but one, we've installed, at great price, very nice cord cleats. Of course they're a pain in the buttinsky because the cords are so long (my windows are very tall) that every time I want to lift or lower the blinds it's long, winding chore... 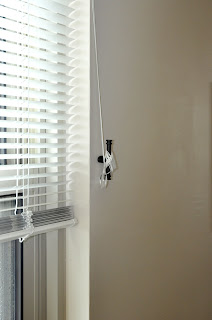 Apparently, used q-tips are temptingly reminiscent of mice and other furry little prey. So to keep Teddy from helping himself in the bathroom waste can, I had to invest in this nice stainless steel lidded version: 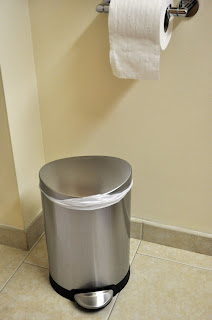 Note that the toilet paper roll above the can is intact. Be assured, that's just a fluke. He has noticed the appeal of the spinning, rocking paper, but for whatever reason, hasn't pursued pulling it all off the roller. Ssssshhhhhh! Don't even suggest it!
But what he does like is clawing certain upholstered furniture pieces. I have heard from several sources that cats don't like to get their paws sticky, so I invested in wide, double-sided tape sold for the express purpose of cat repulsion (note, by the way, what the model cat is doing in the catalog listing of the sticky tape. See how discouraged from clawing the furniture he is?). You will note that, a) there's at least one claw-dislodged thread sticking up over the sticky tape, and b) the tape has been slightly lifted off the fabric. That's because, it turns out, it's fun to chew! 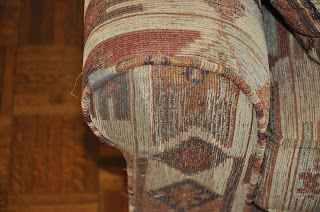 And finally, there's my wonderful, reliable clock-radio with all the buttons on the top. Can you guess why it lives in a cage these days? Suffice it to say, if an 8 lb cat sits on the volume button for a minute or two, then steps on the on button in the middle of the night...and it really happened, more than once. 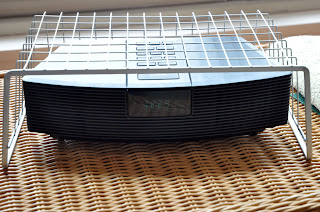 Boys and their big toys 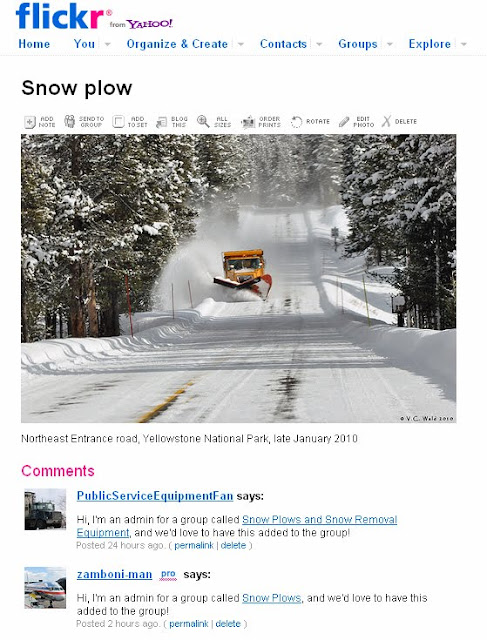 I took this quick photo of an impressively fast-moving snowplow through the windshield of my car when in Yellowstone this winter. I liked the sunlight on the snow-laden trees and the contrast of the big-mouthed yellow machinery against the white snow. It's been posted on my Flickr site in a set called Yellowstone, Winter 2010 where it's sat, more or less unnoticed, until suddenly today, when I got the two "invites" comments above, one from someone known as PublicServiceEquipmentFan, to add the photo to a group called SnowPlows and Snow Removal Equipment, and another from zamboni-man to join the Snow Plows group! Click on any of the links to see what makes some people so happy. I was truly flattered, and humored, to be asked to add my snowplow photo to what I suspect are overwhelmingly boys' (mens') clubs .  And who knows what further fame and fortune it might lead me to?
Posted by Veronica Wald at 6:20 PM 2 comments:

Help me out here 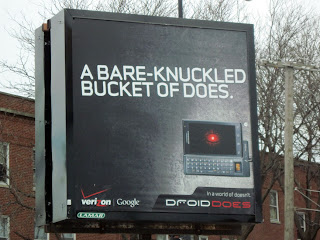 Am I the only one who had to look at this two or three times to get it? Does that make it good, or bad advertising?
I must be too old to know what A Bare-Knuckled Bucket of Does is. I read it, A Bare-Knuckled Bucket of Doze. Female deer.
I think it's supposed to be Does, as in Duz, and perhaps the hint is that it is more nimble and useful than an I-phone. Or something. I dunno.
Posted by Veronica Wald at 6:58 PM 2 comments: