The monarchs aren't here yet, but it IS Spring 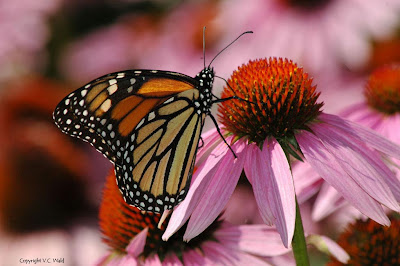 In Chicago today we've had the kind of weather that belies the conviction that we have no Spring, and that we bypass that favorite of seasons, moving from too cold to too hot, with no in-between. Today it was in-between, and even if that's all we get, it sure was a pleasure while it lasted.

05/29/2007 P.S. No monarchs yet, but this morning I was surprised by a black swallowtail slurping up sweetness from my neighbor's flower garden.

Posted by Veronica Wald at 5:53 PM No comments:

A case of schizophrenia

Daniel B. Botkin (2004) Beyond the Stony Mountains: Nature in the American West from Lewis and Clark to Today. Oxford University Press, Oxford. 284 pages.

Lewis and Clark at the meridian of time:

Botkin uses the Lewis and Clark expedition as the basis from which to illustrate his lessons on evolution of landforms, flora, fauna, and above all, river ecology and riparian environments. His frame ranges from the earliest geologic eras to the present, using the wonderfully detailed Meriwether Lewis and William Clark diaries as the starting point for comparisons both back and forward through time. The spread of the Anglo-European population along the route of the Corps of Discovery, and the resultant economic pressures, are among the largest of the forces he describes. It’s a very bright device, especially because the author quotes liberally from the diaries; the imagery and accuracy of their descriptions cannot be duplicated, and their notoriously inventive grammar and spelling are irresistible.
The charm of Lewis and Clark’s naïve use of the English language does not transfer to modern authors, however. While this book has many pluses, a few of which I will touch on below, it is so badly edited that it is seriously distracting. Carelessness with respect to standard usage and other details, including above all, accuracy, casts aspersions (merited or not) on the reliability of an author’s message.
Besides some oddities of organization and stylistic peculiarities, there are numerous minor and major grammatical mistakes, awkward punctuation (lots and lots of semi-colons), and factual errors. Here are two examples, the first an incoherent metaphor from page 46:

“The trees grew remarkably fast – some were twenty or thirty feet high and up to five inches in diameter – as thick as a wrist – after five years.”

Whether diameter, circumference, or maybe radius, was the intended measure, none conjures up a tree or a wrist of feasible proportions.

On page 4, the identification of the Mississippi and the Missouri Rivers is reversed in the legend for a satellite photograph of the confluence of the Mississippi, Missouri, and Illinois Rivers. Given that the theme of the book centers on watersheds, this is a critical mistake.

Production values are exceptionally poor. Many of photographs are so dark and muddy that the details the author is directing us to are lost. Several of Botkin’s own are flecked with dirt (see, for example, pages 19, 51, 67, 78, and 154.) Even if from pre-digital originals, a careful scan, a few minutes at the hands of a competent PhotoShop user, and the cleaned up new prints with straightened horizons would have added to the clarity, and therefore to the credibility, of this text. Worse, colors in the some of the diagrams and figures are so far off from the keys that it’s literally not possible to interpret them.

Clear line-drawn maps would have added greatly to the utility of this book, as would a bibliography or further readings list. Finally, there are places in which interpretations of antiquated usages and extreme misspellings of Lewis and Clark quotes would have been in order For instance, on p. 185, Clark’s description of river fauna refers to a “bottle nose.” It’s clear only that it’s unlikely he was speaking of a dolphin

Having nailed this book for its distracting weaknesses, I want to emphasize that it nonetheless contains important messages delivered in a useful ways. The concepts are magnified by Botkin’s deep appreciation of his objects of study: the geological, biological, and specifically human ecology of two of North America’s great watersheds, those of the Missouri and the Columbia. It is also evident, in spite of his failure to demand quality editing (even on his own home page: http://www.danielbbotkin.com/about/) that Botkin is a competent scholar with a history of academic accomplishment. He served on the faculty at University of California, Santa Barbara, and brings the authority of a doctorate in biology/plant ecology from Rutgers to this work intended for the non-scholarly audience.
Besides retelling the ever-wonderful story of Lewis’ and Clark’s journey, highlighting their observational powers and dedication to accurately recording what they saw, Botkin’s agenda includes enlightening the reader with regard to two popular misconceptions about how nature works.
Received wisdom has it that nature’s normal state is one of “balance” and that descendants of the European colonists are responsible for disrupting the balance that existed in North America before their arrival. Commonsense suggests that all we have to do is to restore that balance to make it all right again. Botkin corrects this romantic notion with descriptions of the ever-changing character of the natural world, in which the apparently copasetic is always morphing in response to natural processes, and always vulnerable to major shocks, like volcanism, Biblical-scale floods, shifting continental plates, and ice ages, that completely rearrange the landscape and the flora and fauna with it.
Botkin is careful to point out that the idea – contemporary to both Lewis and Clark and to today - that North America was in an Edenic state when the Pilgrims landed at Plymouth Rock is inaccurate, as in fact nature changes constantly with and without interference or remedial action by humans (as he notes on p. 164, “like the fickle Missouri, nature itself changes at many scales of time and space.”) He cites evidence that in the era of Lewis and Clark the landscape was not as we imagine it to have been, citing descriptions from their writings of forests intentionally burned by the American Indians for their own various purposes that have since been overgrown by trees and that environmental groups now fight to preserve as “pristine” forestlands.
The author discusses how the first major North American urban areas grew up around rivers, and how their inner cities have survived the test of time as long as the “connection” with the waterways was maintained in social, humanistic, and aesthetic senses. St. Louis, while still economically and industrially attached to the Mississippi, erected effective barriers – such as the unfortunate placement of Interstate highways - to individual relationships with that water. He claims that in spite of expensive public efforts to restore St. Louis’ inner city, none have truly succeeded, and it is because of the disconnect with the river.
Elsewhere, Botkin provides a fair discussion of the context in which past ruinations, such as damming the Missouri and Columbia Rivers, were in fact, economically beneficial, allowing riverside agriculture to flourish, at least in years of normal flows. But Botkin’s surprising conclusion is that the salvation of the natural environment is in urbanization, positing that the more humans confine their living to the metropolitan, the more we will treasure the wild, and the less we will intrude upon it for living space. I find this to fall more in the “wishful-thinking” column than in the “useful-solutions” column, but it is nonetheless food for thought.

Posted by Veronica Wald at 8:00 AM No comments:

There's poetry in there somewhere 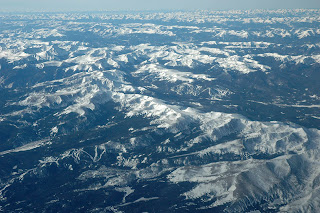 I've just returned from a long weekend in Utah that began with an unusual clear-day, early morning flight from Chicago to Salt Lake City. Being a window-seat type - to me, there's no joy in flying unless I can watch the world go by from on high - I took a few notes as we fled Chicago, crossed the Mighty Mississip and made our way westward. This is what I had when I opened my notebook again this morning:

erosion, large and small scale
man made and not man made

rumpled and smooth
broken and whole

straight and straightened
meandering and dammed

All of this before we even got near the Rocky Mountains. This is a photo of the Colorado highlands taken along the same flightpath last February.

Posted by Veronica Wald at 8:25 AM No comments: