For those of you who might wonder what the organization I work for (NORC) does, here is an eye-opening example, my co-worker Nick Rabkin's  exploration of the reasons for the decline in arts patronage and participation in the United States in recent years:
Report connects dots between arts education and future arts attendance
Posted by Veronica Wald at 2:49 PM 1 comment: 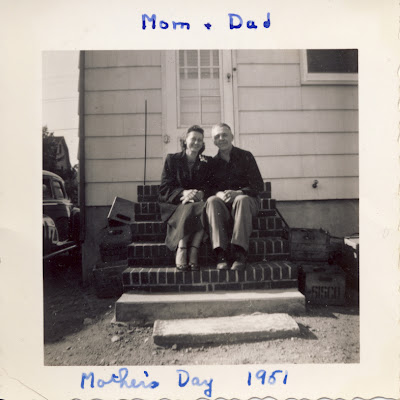 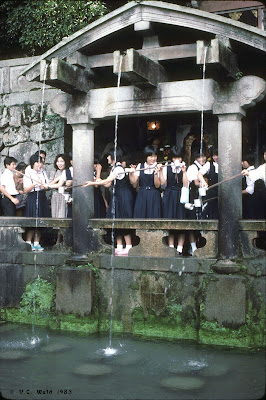 I have had a very hard time (who hasn't?) wrapping thoughts around the horrors in Japan over the last week or so. It's been difficult enough to understand what happened in Haiti, Chile, New Zealand (twice), Indonesia and Thailand. Of all of them, Japan, as the world's third largest economy and a very technologically advanced country, is easily the best prepared to recover economically.  Its one-two punches were bad enough without the third and probably most serious punch of nuclear meltdown and the looming potential for persistent environmental radiation. On top of that are the multiplying effects of massive long-term loss of power generating capacity; think of what that means for heating, cooling, industry, schools, hospitals, the arts and sciences...All of this on top of appalling loss of life.
This is too much to internalize. To help me in my contemplation, I looked back to a notebook from my one and only visit to Japan, in September of 1983. This trip followed the second of two academic sojourns through the People's Republic of China with my then husband, a physicist much in demand as a speaker at Asian universities (see The China Diaries and They say, but she saw, for example). My first diary entry compared 1983 Japan to China, which was still, though increasingly rapidly, crawling out from under the end of Maoist government and the Cultural Revolution:
The contrast between Japan and China is almost incomparable. This is a country of things that work, of good design, of neatness and cleanness, of riches and abundance, of cleverness and great practicality. The international terminal of Narita [airport] is easy to cope with, highly automated, simplified, and every announcement, written or verbal, appears in English as well as Japanese. Except for our plethora of heavy luggage, getting from the airport by shuttle bus to the Keisei train for a one hour smooth-as-silk ride to Ueno Station, was really easy and amazingly convenient.
The next day I wrote: 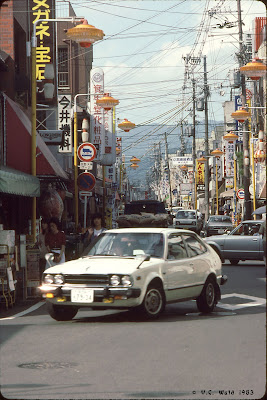 Japan continues to charm us with its convenience, cleanness, and the ease with which we can get around here. This morning we took the famous Bullet Train (Shin Kan Sen line) from Tokyo Station, with one two-minute stop at Nagura, to Kyoto.... The hotel here is classier [than the one in Tokyo], and thus our room is a little bigger. And our little red Hitachi color T.V. is free here—in Tokyo it was “coin-op.” We have the same kind of bathroom, a practical little metal box that looks like it came off a ship and was installed as a water-proof and fire-proof unit in one corner of our room. Here we are also each provided with a toothbrush in a sealed plastic container—also included is a tiny plastic tube of super minty “Happy White Dental Creme” with each. We also once again got a long kimono [printed cotton  yukata] each, plus one short men’s kimono meant to be used as a kind of Japanese equivalent to a British “smoking jacket.
And in spite of yawning cultural and linguistic gulfs, I noted:
We’ve found that it is easy to communicate by gesture here. Sometimes in China we had more trouble doing so, but the Japanese always seem to understand what we are up to in no time.
Obviously, we were delighted. That night:
We had dinner at a little Japanese-style restaurant in the hotel. We decided to try real tempura, and while waiting for our entrees were brought a bowl of a clear and good-smelling liquid with it. In Chicago tempura is customarily served with a clear soup [miso] and a small bowl of dark-colored strongly flavored salty dipping sauce. Since we weren’t sure whether this lovely liquid was soup or sauce, I volunteered to sip a little while my husband, who was sitting in clear view of the waitresses standing in front of the sushi bar, kept a watch to see if anyone was looking at the American hicks. I sipped a little and (sincerely) declared it to be a delicious soup. Whereupon Bob picked up his bowl to take a gulp—he was instantly spotted by a cook and the waitresses, one of whom came over, amidst her colleagues’ obviously stifled giggles, to straighten us out—the liquid, she demonstrated, was for dipping, not for drinking! It was very funny. In China nobody ever has bad manners, but here we feel like we’re all elbows half the time.
It was a beautiful country of happy people. What will it be now? 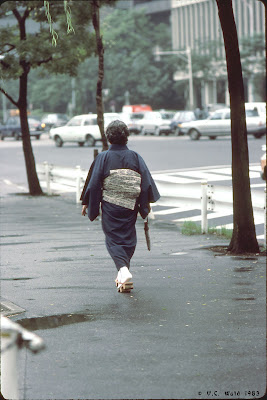 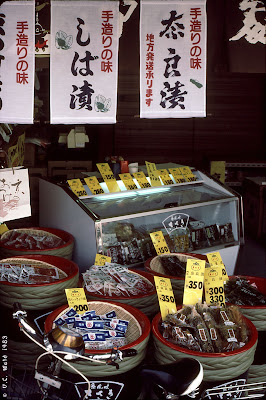 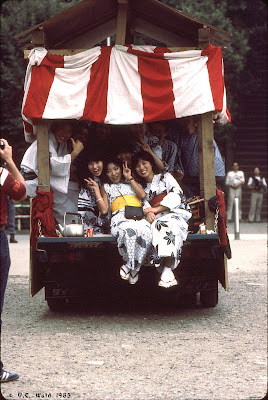 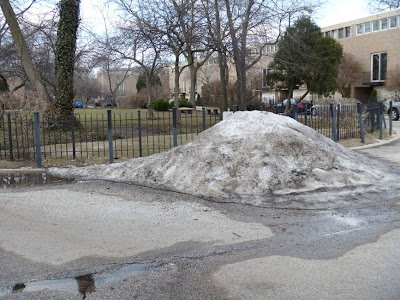 I know a lot of people would tell me I need a psychiatric referral when I say this, but I love winter (there! I said it!) and I'm sorry to see it go. And going it is, no doubt about it, the days are quickly getting longer (though my early morning constitutional, now amply light before I return home, will be in the dark again as of tomorrow, because it's time for the clocks to spring forward tonight--another sign, be it socio-political, that the season is changing). A friend says crocus leaves are already peeping up in the sunny parts of her back yard. The average daily high in Chicago is in the high 30s or low 40s. I looked up at some bare branches yesterday morning and I'm sure they've got telltale swellings hinting that leaves will be bursting forth momentarily (well, in Chicago, I'm pretty sure they have a full month to go before they do, if they have any sense at all). Oh, yeah, Ma Nature could still do it again, she's been known to dump a foot of snow on us in April, and it's still only mid-March. But I'm going to miss winter. I loved the beauty our February blizzard bestowed. I watch webcams on top of high Yellowstone and Grand Teton peaks all the time. This one is at the fire lookout on top of Mount Washburn in Yellowstone, a great hike in clement weather, but unoccupied in winter. The cam slipped its mooring and instead of gazing out over the mountain's shoulder, the grand canyon of the Yellowstone River, and beyond like it's supposed to, it's neatly focused on the railing outside the lookout. How about those fanstastic crystal formations? Winter, I look forward to spring, summer and fall, and to seeing you again in full cold force next year! 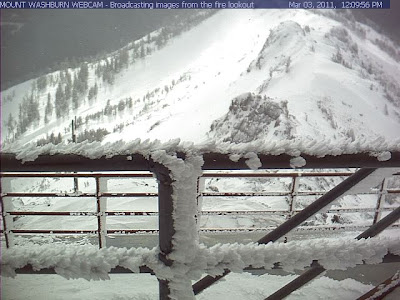 A lot going on in a little space 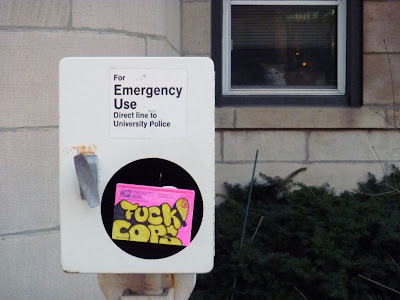 Noticed this very busy vignette at the bus stop this morning. There's a lot going on. For starters, the white box holds an emergency telephone that goes to the University of Chicago police, which is the biggest force, second only to the Chicago Police Department, in the city, and which takes the concerns of community safety very seriously. Click on the photo to enlarge it to contemplate all the details. The call box has obviously been in place for a while but the pink-and-yellow urban "folk-art" item is new. Be sure to check out the background as well. 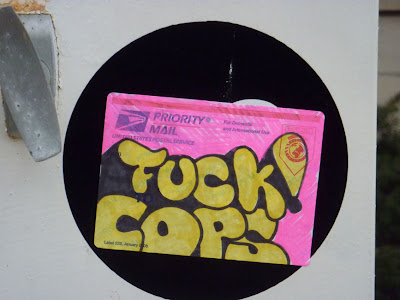