Bear-watching in Churchill, Manitoba is different from bear-watching in the rest of the world. Although there are places where the concentration of bears is even higher (on a similarly seasonal basis) such as Brooks Falls in Alaska's Katmai National Park during the salmon runs, bears and people are physically segregated and bears, focused on feeding, pay little attention to human activity. But ever since the early 1970s when Yellowstone National Park banned the feeding of bears, there is no place else like Churchill that affords such intimate observation of wild bears. 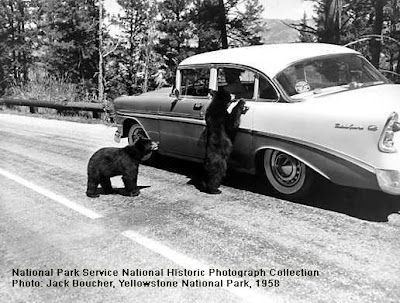 The little town of Churchill and close surrounds is where hundreds of polar bears congregate from mid-October to mid- or late November each year, waiting for Hudson Bay to freeze over so they can end their months-long fast on land and get out on the ice to hunt seals. The resulting very high density of bears increases the chance to 100% that bears will be seen over a week-long visit. That contrasts strongly with a similar amount of time spent in Yellowstone and Grand Teton National Parks in early June, when bears are seeking food at altitudes that humans regularly occupy. Although the chance of spotting a grizzly or back bear in the greater Yellowstone area in early summer is higher than at any other time of the year, it is also possible to spend 7 days looking, only to see not one bear.
Churchill also once unabashedly institutionalized bear-feeding, and it still goes on in a small-scale, off-line way. But bear-watching in Churchill is virtually bait-free these days, so it is remarkable that the bears appear to be so curious about the presence of humans on their landscape.
This sequence of photos was taken from the safety of our transport, a noisy old school bus, along a side road near the Bay. When this bear, about 40 or 50 yards off the road, noticed the bus grinding slowly along the snowy dirt road, it was startled but rather than fleeing, it froze. Jim Halfpenny, our guide, inched the bus forward and then turned off the engine, motioning to our excited group to remain hushed. 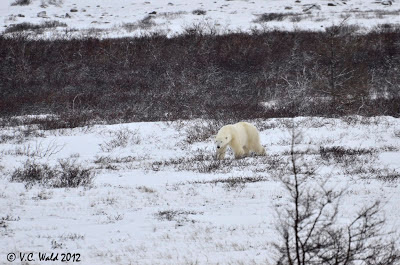 It then proceeded to walk cautiously toward us, stopping every few feet to monitor the situation. Maybe it was just a sleepy bear, but yawning is also a symptom of stress in polar bears. 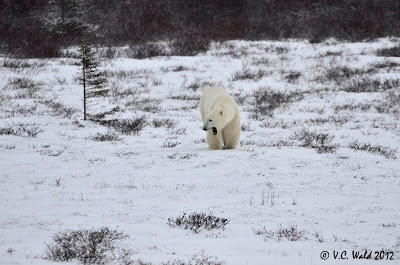 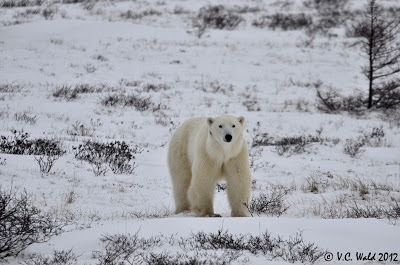 The closer it got, the more confident it became. 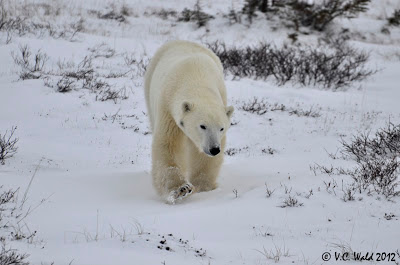 By this point it was apparent that it had a black smudge under its right ear, and within the ear, a small white plastic identification button. That the smudge was still visible - presumably a signal to wildlife managers or scientists that the bear was tagged - suggests that its experience of being darted with a tranquilizer and physically handled by humans was recent. 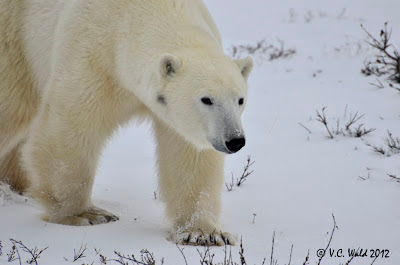 Nonetheless its curiosity prevailed, and it kept walking toward us. 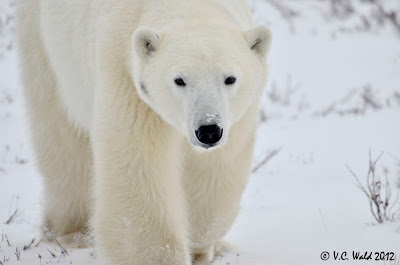 It readily made eye contact with me. Or with the big black round eye that is the business-end of my camera lens. 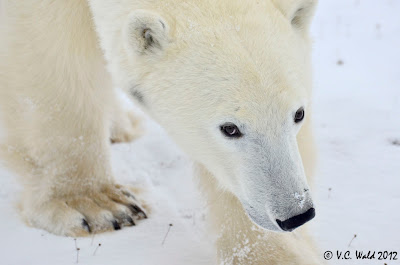 Polar bear claws, adapted for dealing with ice and snow: it is apparent from the angle of this shot that the bear was almost directly below my perch at the window of the bus.
Nearly face-to-face, from the safety of an old school bus: was this young bear's curiosity satisfied? 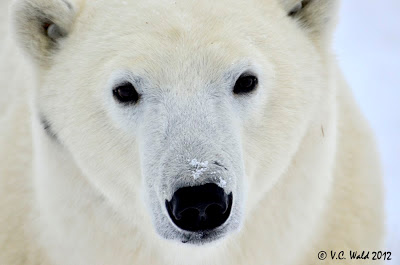 Jim started the engine as it became apparent that this healthy little bear - probably a young male - was contemplating rising on his hind legs for a better look inside the bus. The bear skedaddled immediately, and no one was the worse for the wear.

Churchill polar bears are also very much attracted to larger tundra vehicles. Once out on the tundra, by far the best place to see bears is anywhere within a couple of hundred yards around a tundra lodge, of which there are two (Great White Bear Adventures', and Frontiers North Adventures') parked on the tundra for the 4 to 5 week duration of the season.  Almost all of our better 2011 bear photos were taken at GWB's lodge. This year we circumnavigated FNA's Tundra Buggy Lodge very profitably in terms of photo opportunities. 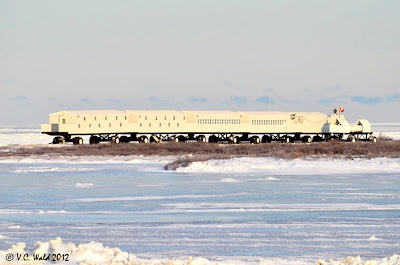 Why do they like these structures?  There are several possibilities: lodge kitchens produce three meals a day, so it might be the exhausted food odors. Or, the fact that there are people in them who look through open windows and stand on viewing platforms and talk at all hours might make them intriguing to a bear that has nothing else to do but investigate human activities. They are so large, conceivably  they provide a little shelter from the wind. This young bear found the lodge undercarriage to have potential as a toy: 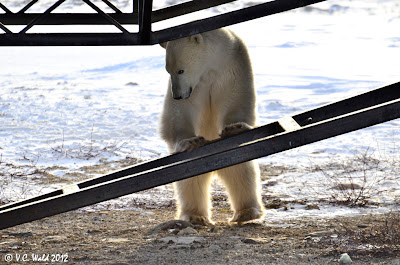 The relative age of a polar bear can be determined by the color of its tongue. While this was not a cub, it was a playful younger bear, small in stature, and with a still pinkish tongue. As they age the tongue becomes more gray and eventually, in an older bear, nearly black in color. Note the huge buggy tire behind the bear. 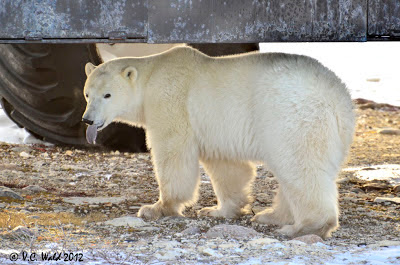 Mobile "day-trip" buggies come and go, bringing more interesting sights, sounds and smells. This bear sat right under my tundra buggy window. The orangey stain on its feet was from digging in kelp washed up on the beach. Unfortunately we weren't interesting enough for it to rise up on its hind legs for a closer look (at each other). 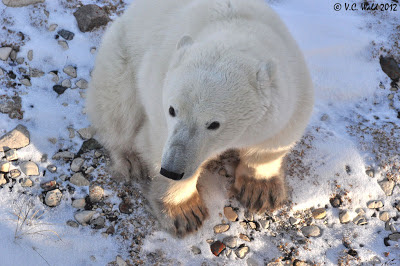 It wandered away off to a buggy parked near-by where there were people outside on the viewing platform. Now that's so much more appealing to a bear than people inside the white box! 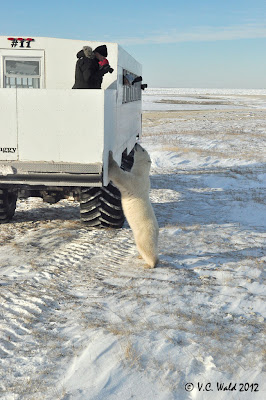 We saw this behavior, which is in fact stereotypical, repeated at another buggy soon after kelp bear went on its way. There is a reason the buggies are as high off the ground as they are. Occupants are strongly warned about not allowing scarves or camera straps or hands to dangle... 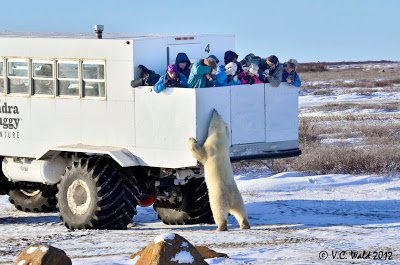 In what other wild setting do bears approach people, safe in vehicles, for such close-up looks at one another? Why do the bears do it? Their chances of scoring food are very, very small, but in 2011 we watched a bear nestled under a tundra lodge viewing platform consume a ball cap that had blown into range off of someone's head. I wonder if it assuaged his hunger at all? 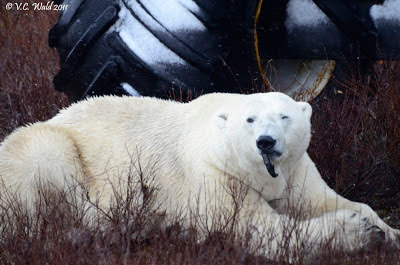 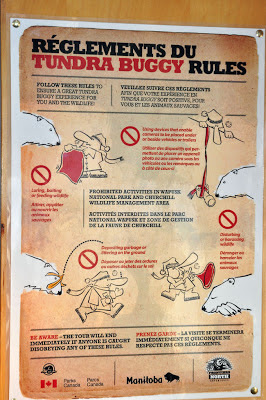 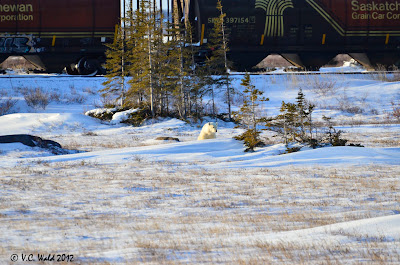 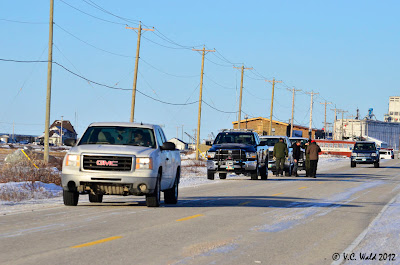 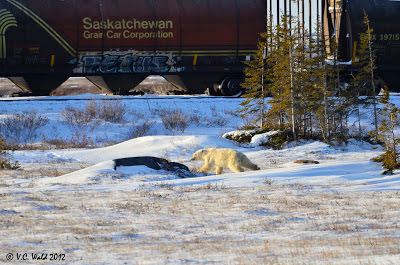 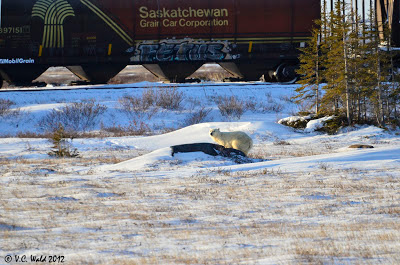 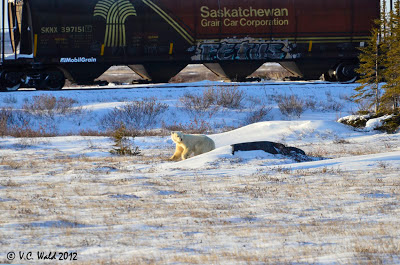 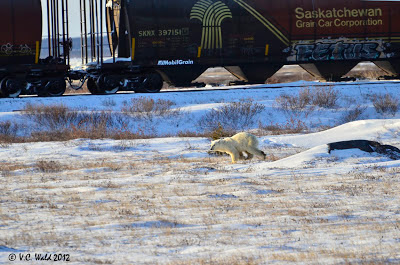 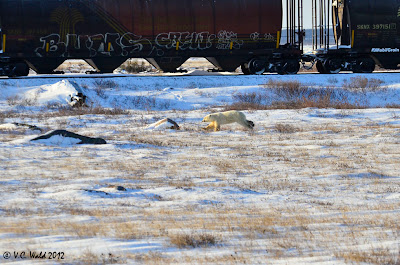 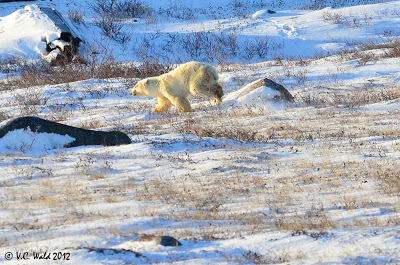 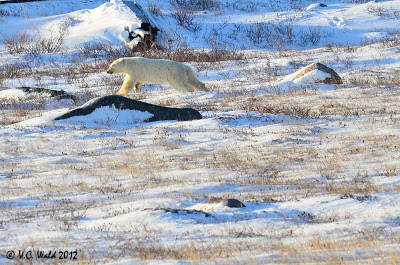 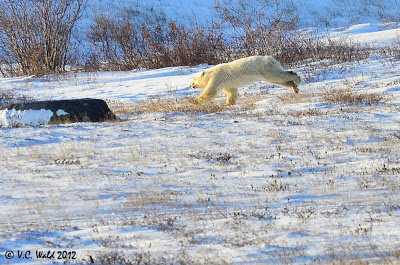 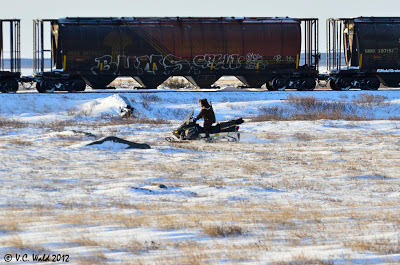 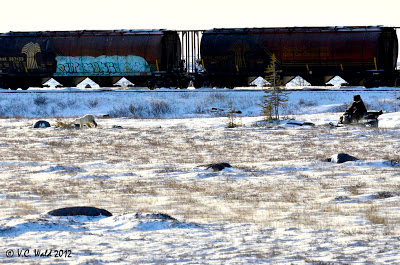 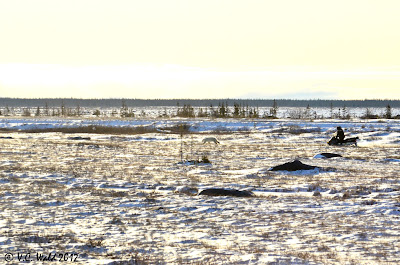