An island in time. In Chicago.

The summer I turned 13, my parents parked me at a summer language camp, Landheim von Specht- in Ambach am Starnberger See (Ambach on Starnberger Lake), Bavaria. The kids in the camp hailed from all over--Germany, England, Africa, Greece, and me, the sole representative of the U.S.. We had individual tutoring and classroom instruction in German, and field trips to places like the puppet opera theater of Munich, where I saw my first, if watered down, Magic Flute. That being dairy country, we were given milk to drink that came (and smelled like it) straight from the cows. Yogurt was entirely new to me. It also had a bit of arome d'grange, and required spoonsful of sugar to be edible, even with sweet zweiback dipped into it.
At the end of the summer my father returned to the U.S. and my mother and I moved into a little apartment in a modern high-rise on Calle Enrique Larreta in Madrid, where we spent the 1963-64 school year. I was enrolled at the American School of Madrid, where there were interesting friendships to be had, including with my 8th grade classmate, Rafael Diaz-Balart (on whom I had an unrequited crush), grandson of the famous anti-Castro leader of the same name, and brother of Lincoln and Jose Diaz-Balart, both well known in American public life today. The administrators, teachers, and students were ex-pats and Spaniards with connections to America, and Cuban refugees and Americans accompanying their parents on business in Spain, such as me. Mother had a Fulbright grant to train teachers in teaching English (TEFL). For my part, as usual, I had my friends, my horseback riding lessons, and my adventuresome spirit in that country still very much under the reign of Generalissimo Franco. We had a car, and explored the Iberian peninsula widely and deliciously--Santiago de la Compostela, Salamanca, Sevilla, Segovia, Cordoba, Cuenca, Toleldo, Barcelona, Avila, Malaga, Torre Molinos, and Algarve and Lisbon in Portugal, were on our itineraries. It was an exotic place, like an island not yet caught up with the rest of post-war Europe: there were castles in ruins, wonderful, amazing food, and throwback rituals like bullfights and medieval Semana Santa processions. Acquisitive by nature, I enjoyed shopping for Toledo-ware, iron- and ceramic work, textiles, Spanish leather goods, and, with my own precious Agfa Optima II camera, took lots of pictures I considered interesting (and some, though now fading ever faster, are indeed so).
But among the things I enjoyed most above all, both in Germany and in Spain, were simply visits to any kind of commercial venture, including cafes and restaurants, delicatessens and groceries, drug stores, perfumeries, department stores, shoe stores, stationers, book stores, souvenir stalls, you name it, the goods were magnetically intriguing, so different from what I'd experienced stateside, new items to look at, or entirely new forms of things I was well-familiar with back home. At that time, Spain especially had one foot firmly in the prior half of the 20th century, but Germany also had not developed to anything remotely like the cosmopolitan place it is today.

Yesterday, some 47 years after my initial European immersion, I took a stroll through Chicago's charming Lincoln Square area, and in particular spent a long time browsing in Merz Apothecary, established in Chicago by a Swiss immigrant in 1875. In 2010 it still flourishes, with a small storefront in the Chicago Loop and a robust internet trade. But nothing beats its original location at 4716 N. Lincoln. Because of conscientious efforts to retain the original look and feel of an old-style European apothecary, I was whisked feet first back to Madrid and Munich, 1963. What a sensation, what a pleasure to know all that has not been lost! Even many of the product lines (along with their many modern counterparts) --Fa, Badedas, Nivea, 4711, Roger & Gallet, Maja -- new to me in 1963-64, are still available on their shelves, some even in packaging hearkening right back to those halcyon days.

How deep is the trouble we're in?

The Chicago Loop offices of the nonprofit where I work, NORC (an independent social science research organization that provides data and analysis to people and institutions that make decisions about key social issues) has become the home of some extraordinary photographs around which the field of "visual social science” crystallized. While still vigorous, but aware that she would likely suffer a fatal recurrence of breast cancer, Rachel Tanur launched a series of photographic sojourns through Africa, Europe, and North, Central, and South America, bringing back hundreds of iconic (and some aesthetically remarkable) images documenting what she observed. The photographs, taken between about 1999 and 2002, were initially part of the National Science Foundation’s Art of Science Project, but have now found their permanent place along the NORC's corporate halls. Rachel’s mother Judith M. Tanur, Distinguished Teaching Professor Emerita of Sociology, Stony Brook University (New York), is a valued member of NORC's board of trustees.
Of the many thought-provoking images on the walls of our downtown offices, this is the one* that struck me most forcefully: 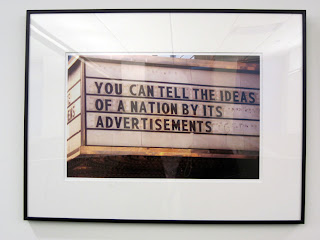 While it is not a given that the statement is unalloyed truth, it clearly deserves thoughtful consideration.  Below is a small selection of screen shots from cable TV this morning, amply illustrating why the avowal on the marquee must be taken seriously. If it is so, the United States is in very deep trouble. 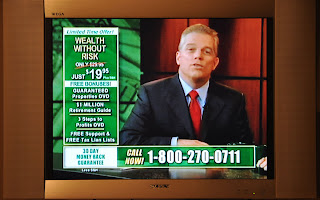 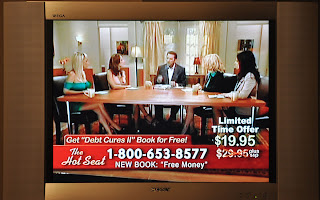 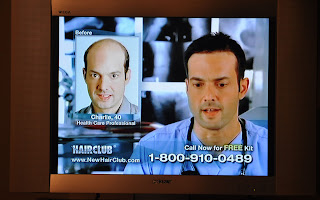 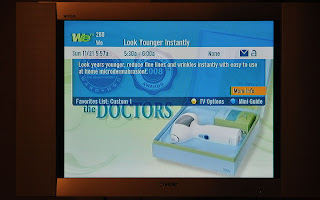 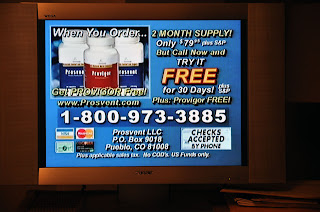 * Because Rachel was not able to catalog her photos before she died in 2002, I believe where exactly this photo was taken is not known. Please learn more about Rachel's legacy and see a gallery of her wonderful photographs here  and for more about her story click here.
Posted by Veronica Wald at 9:05 AM 2 comments:

(This is a not-great trailer of the same production
I saw, but at a different company and with a different cast. At least it gives a little taste of the magicality and musicality of the piece.)
Yesterday afternoon I supremely enjoyed the first opera I’m attending in Lyric Opera of Chicago’s 2010-2011 season, Benjamin Britten’s A Midsummer Night’s Dream. Benjamin Britten is one of my favorite 20th century opera composers, and I’d never seen his brilliant translation from Shakespeare’s stage play to musical opera. Those who recall the story from their school days or favorite repertory theater know that it is all about a prolonged dream involving fairies (both royal and Puckish), a band of well-meaning actors (as the troupe says, anticipating Yogi Berra but most definitely in Shakespeare’s words:  “If we offend, it is with our good will.”), and lovers-gone-awry galore. All is happily resolved at the end of their long, intertwined, disorienting dream, but it’s also clear that no one got a restful, restorative night’s sleep.
By happy coincidence, earlier last week my friend and colleague at the University of Chicago's Division of Biological Sciences, Professor Eve Van Cauter, gave a presentation to my alumni club. The topic was her recent research on sleep and biorhythms providing experimental evidence in healthy human subjects of the epidemiologically-observed associations between chronic reductions in sleep duration and quality with the development of obesity and obesity-associated type II diabetes (“diabesity”).
Here is how I introduced her:
I have known Eve Van Cauter since the late 1980s, when she first brought her extraordinary human subjects experiments to the NIH-grant funded Clinical Research Center at the University of Chicago, where I was administrator at the time.
One of the joys of grant administration is grant renewal, and part of grant renewal is the tribulation of a site visit, which goes on for a day-and-a-half and involves the descent of a group of 10 experts and peers, and a few government officers, to whom we had to present our best projects to convince the funding agency to continue their largesse for another five years.
Naturally, there is a great deal of art (and maybe science) to how the projects are presented. Whoever goes first gets to start the day off with a bang. Whoever goes right after lunch is doomed unless they’re a pretty lively speaker. However, you always reserve your strongest presenter for last, so after a long, exhausting day the reviewers will leave inspired, energized, and deeply impressed by the quality and creativity, importance, and soundness of your center’s science and productivity.  Eve Van Cauter was always designated to go last.
Although her doctorate, earned at the Free University of Brussels, is in biophysics, her contributions are to the disciplines of human physiology and the unraveling of the mysteries of sleep and circadian rhythmicity, the daily biological clock if you will. As summarized on her 37-page curriculum vitae, her interests include, among other things:
The role of sleep and circadian rhythmicity in endocrine regulation, metabolism, cardiovascular function, mood, and cognitive performance;
The interactive effects of sleep loss and reduced sleep quality in aging and the associated impacts on health and cognition;
The control of circadian rhythmicity in health and disease, including how we adapt to time shifts like jet lag.
Which among those is not of direct relevance to all of us? I present to you my friend and colleague, Eve Van Cauter who is going to tell you about heretofore unrecognized relationships between the body and the “brain” phenomenon of sleep. 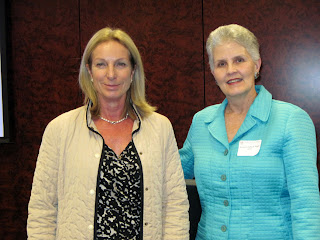