Pine trees: My trees, the test says so!

These beautiful conifer images are by Andie Thrams, and she holds the copyright.

Sometime in my "formative" years -- probably my teens -- I was given a "test" in which I was to pick a tree shape. As I recall, the choices were small black silhouettes against a white ground -- and the choice keyed to a personality classification.  I think it was one of those school-administered evaluations, for what rational purpose I can't imagine. Google queries don't yield that particular panel of images as they live in my memory -- a spreading oak, an upright laurel, a droopy willow, something bearing round fruits, a leafless winter skeleton...and an unmistakable pine. But as this was a school-administered test I had to take it seriously -- in the 1960s, who knew what the forever consequence of such a thing might be! In any case,  I love trees, so I contemplated the virtues of the disparate shapes, carefully analyzing the symbolism of each before recording my answer. The bare winter version was immediately eliminated. But how nice to sit in the shade of that leafy, wide-spread oak, people who like to do that probably rank highest in personality. On the other hand, those fruits might be fun to eat, would selecting the apple tree forever mark me gluttonous? Are those coconuts on the palm tree?  It was a little like this: 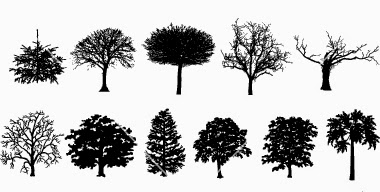 Oh dear, which one is the right one? Then my eye landed on the Christmas tree outline of the pine. I knew instantly that it represented me, unequivocally, and totally. Pines provide shade, they're green all year, they grow everywhere in mountains, deserts, rainforests, even in the high tundra where their shallow roots maneuver around the permafrost. They feed humans and animals alike, provide ship's masts and tepee poles and myriad other sheltering materials. They are symbols of extreme longevity, and come in every size and shape possible. But above all, they smell wonderful: even sitting at my computer in Chicago I can call up the fragrance of dry needles baking in sweet mountain sunshine, their scent released by my very steps as the birds sing alarms at my presence. They are splendidly ubiquitous in my favorite places like Yellowstone and Grand Teton National Parks, where lodgepole pines are most common, but Engelmann spruce (with cones, below), Douglas fir (with bear, below),  junipers and others are also to be found. I don't know what my selection told the school psychologist about me, but twenty-first century, completely non-scientific versions of the test, newspaper horoscope-like, that supposedly fit cartoony color images to personality characteristics no longer include a pine image. What a mistake to drop this highest order, most complex of trees from the options!

Thram's images, above, are 3-7/8 x 9-1/4 inch note cards I bought years ago and liked too much to let go for their intended purpose. Some day I may even frame them.

According to the (abbreviated) descriptions on the card backs, they are: