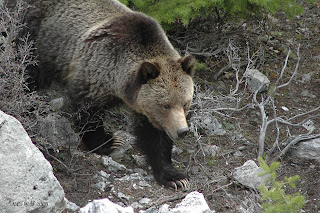 In June of 2008, KLK and I fortuitously had the opportunity to view and photograph this magnificent grizzly bear that was of such a size, and without a cub at the time of year when both black and grizzly bears are most active and most visible with their babes, we assume it was a boar.
Exactly two years later, my fellow Yellowstone chat-pager, Hélène, has posted this video, taken in exactly the same spot as we watched the “boar.” I think we were very wrong about the bear’s gender.
Whether or not this is the very same bear (it sure looks like it), four cubs is an extraordinary production. Quadramom Bear is truly the Park Celebrity of the Year. May she have all the luck raising them to maturity and independence. If all goes well, she will liberate them in the late spring of 2012. God speed, lovely bears!

Posted by Veronica Wald at 8:38 PM No comments:

Chopping down the world's mountains, one kitchen at a time:
Granite is the most popular material for kitchen counters.
Posted by Veronica Wald at 4:30 PM 1 comment:

For the last 62 years, the second weekend in June has been reserved for the 57th Street Art Fair here in Hyde Park, where I've lived for the last 42 years. I always go if I'm in town. It's never been the greatest, and in recent years has had trouble attracting high quality artists or high quality buyers (not clear which comes first). Hyde Park's a hard sell: No place to park for visitors from other parts of the city (though there are a couple of inexpensive express buses and the Metra commuter rail to bring you here if you can get yourself to downtown), we're mostly upper middle class but don't part so readily with our money (some of us may be well educated and full of SES potential but don't have much to part with, since a good fraction of the community is made up of students in the college and graduate schools of the University of Chicago and numerous institutions of religious higher learning), and the weather is perfectly capable of being awful at the beginning of summer. I've also often wondered at the selection jury's sanity. For instance, this year there were at least two exhibitors selling beautifully crafted, boringly similar, wood pens. There was a new vendor this year selling laser-cut iron silhouettes, just like the kind made in China and sold in the gift shops in Grand Teton National Park. And there was a lot of work for sale expensive out of proportion to the creativity, materials, and maker's time requirement. However, happily, this morning the weather was spectacular, and the people-watching was good. Here are a few snaps just for fun. 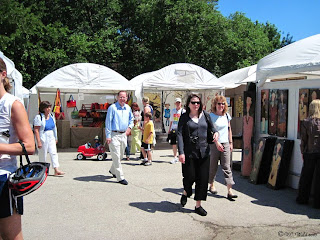 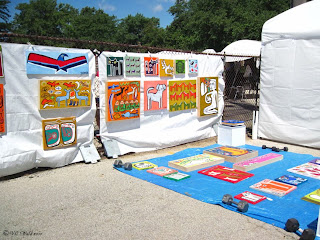 Not all the art is fine art 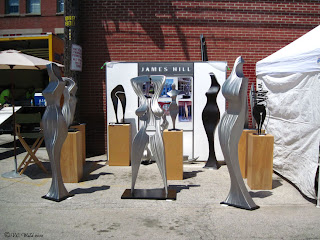 Abs, and everything else, of steel 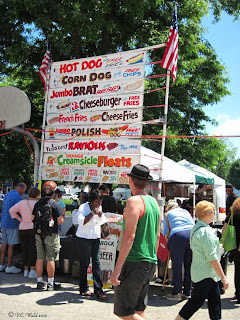 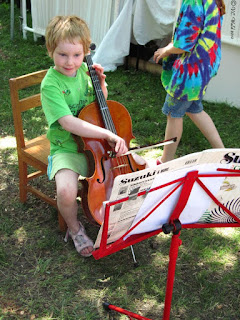 Her cello case was open and people were dropping in bucks. At least she'll always be able to make a living playing in the subway station. 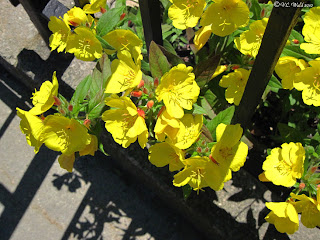