The perils of "responsibility"

When I returned from Yellowstone a few weeks ago, I posted a short summary of my trip on a chat page, (hosted by John Uhler of Rexburg, ID), where virtual friends waited for stories and photos from those of us lucky enough to visit the park. One of my comments was: “[I am] majorly bummed by the condition of the Druids…mange is killing them slowly and painfully.” The Druids, named for Druid Peak that overlooks their territory, were at one time the largest and most robust of wolf pack following very successful restoration in 1995. Many interesting phenomena, some beneficial, others controversial, but always complicated and thought-provoking, have resulted from the return of wolves to Yellowstone, and the mange story is one of them. Watching these once robustly healthy animals in the distance, visibly stressed and debilitated, in some cases almost hairless, unable to lie down on the cold winter ground and trying to sleep standing up, was excruciating. As of this writing, only one wolf of Druid heritage remains alive. And the Druids are not the only pack suffering this winter.
Another chatter responded to my comment thus:  Mange killing them? Any talk about possible treatment?  Yes, effective treatment for sarcoptic mange is available, so yes, fellow chatter, while there is plenty of talk about possible treatment, talk is cheap.
Although wildlife management policies have continually evolved throughout the history of Yellowstone and our other national parks, it is not the policy to render aid or take measures to salvage sick, injured, or dying animals, but rather, to let Nature take its course.  Exceptions are made when human welfare is threatened, as when a grizzly bear sow,  known as “264”, lay paralyzed by the roadside after being struck by a truck. The bear was quickly removed while still alive to obviate the huge crowds and traffic issues that would have ensued, then euthanized after determining that there was no hope of recovery.
It happens a lot. I have stood at a bridge at Cache Creek in Grand Teton National Park in early summer, when the creek was a cold, full onrush of snowmelt, watching a mother moose across the river, impatiently expecting her very tiny calf to follow. But the calf was too little, too undeveloped, up to its belly in the water, to be willing to step into the deepness ahead, resisting the force threatening to sweep it away, too afraid to turn back to the near shore. Its trembling legs were on the verge of buckling. It would have been so easy for humans to rescue it; we could have put a rope around someone’s waist, he or she could have waded into the foot-and-a-half deep water, scooped up the calf, wrapped it in blankets, and perhaps left it safely on the near shore for its inexperienced mother to come back to nurse and nurture. But we did not, we honored the Laws of Nature, which say: baby animals shall not — cannot —all survive. I left, I could not be an observer any longer.
Now please consider this. What is the observer’s responsibility when the suffering is human, and it is within their power to do something? Please watch this entire discussion, and give it some serious thought. Not considered in this piece: What are the social implications of removing this woman from her home, taking her to a place where she has no family to assure her welfare, no way to pay for her care, and perhaps little chance of survival or rehabilitation?
Is this sufficient food for thought for you today?
Posted by Veronica Wald at 8:45 AM 1 comment: 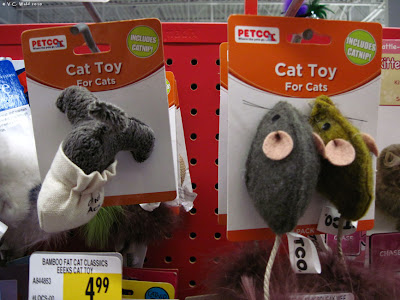 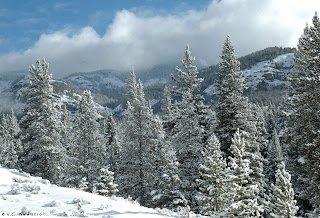 I'd love to be blogging, but I'm processing, (still) processing, photos from my winter Yellowstone sojourn that I returned from on February 2. That's the good news: lots of interesting photos evocative of the exquisite experience. For now, will you settle for a couple of teasers, beyond those of Mr. Elk, who got the last laugh on the photographer?
I promise to post more, with commentary, sometime soon. (The hinge of course, is how you define soon. I leave that to you.) 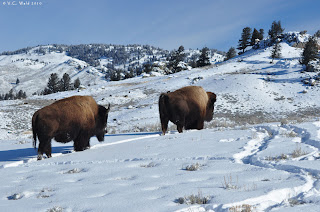 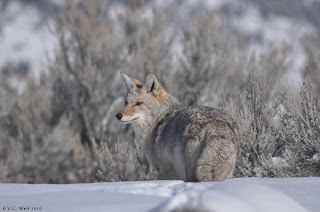 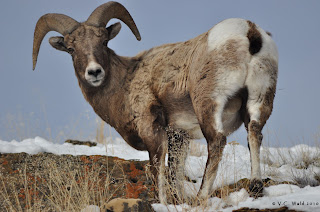 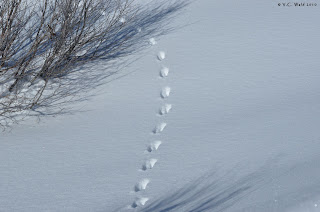 Posted by Veronica Wald at 7:39 AM No comments:

Vote for your favorite (as always, CLICK to appreciate the subtle difference).
Version A: 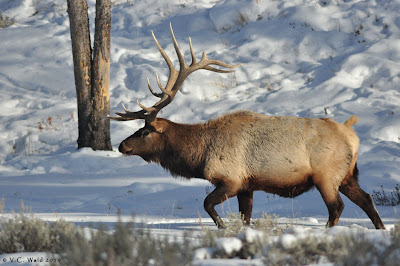 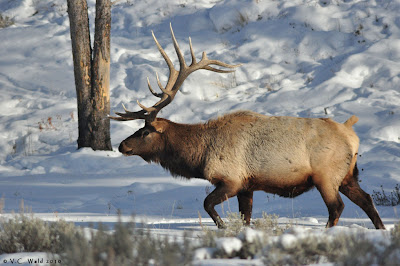