Just Life, and a Good One at That: Photo Essay

From my last couple of posts a reader might be inclined to avoid Yellowstone and Grand Teton National Parks as depressing places good only for witnessing that Great Bitch Mother Nature wreak her havoc. Not so, let me assure you! They are in fact supreme places for lifting the spirits, making the heart sing, and, mostly, for being constantly awed by Nature at her best. Here are some examples, in no particular order. I'll keep commentary to a minimum so you can judge for yourself. 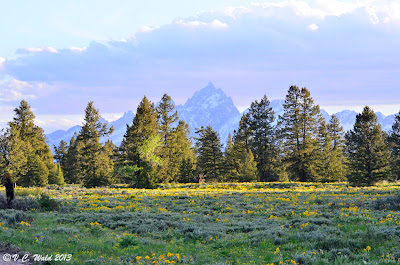 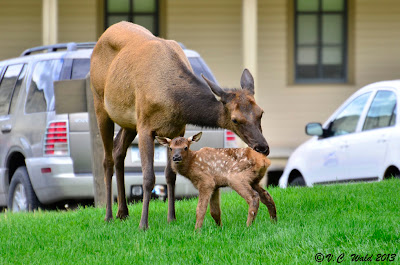 Newborn elk calf, Mammoth Hot springs, just learning to stand and nurse. The elk find safety from predators to be a fair exchange for the presence of humans, and their vehicles, and their buildings. 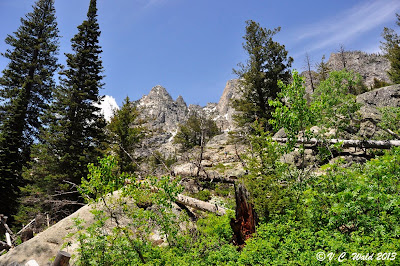 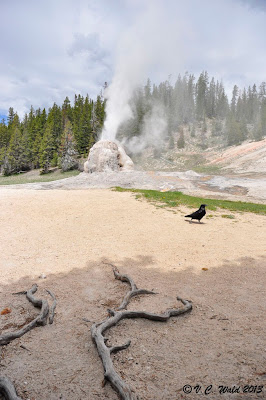 Lone Star geyser is an easily accessible back-country geyser in Yellowstone. The cone itself is about 12 feet high, and in full eruption reaches 30 to 40 feet and lasts half an hour. It's one of very few geysers that can be safely approached closely enough to fully sense the power of the eruption. 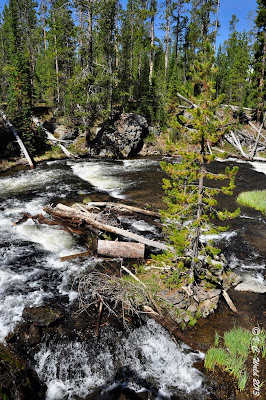 The trail to Lone Star geyser follows the Firehole River for a couple of miles.The Firehole is a great trout stream. 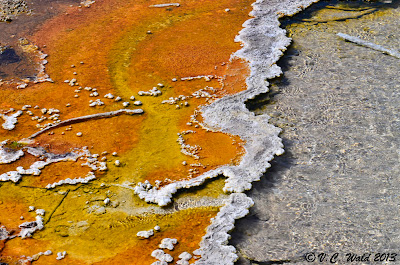 Bacteria and algae capable of thriving in extremely hot, very acidic or very basic, highly mineralized conditions in Yellowstone's thermal features - this one is the edge of Black Pool in West Thumb Geyser Basin - are responsible for the glorious colors. 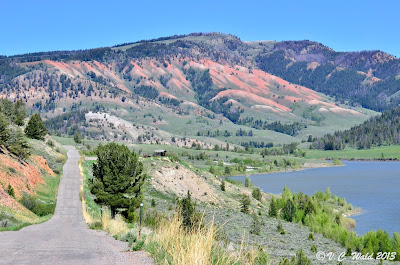 Speaking of glorious color, these are the Red Hills, a little east of Grand Teton National Park in the Gros Ventre Wilderness; the red color comes from iron. The lake is Lower Slide Lake, formed by a sudden massive landslide that dammed the Gros Ventre River in 1925. 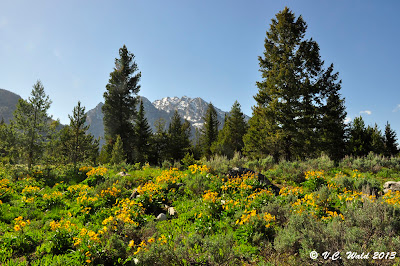 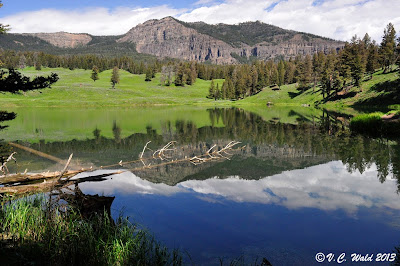 Trout Lake, Yellowstone National Park. We looked for otters but saw only the fish they feed on, the Yellowstone Cutthroat Trout (classified as a threatened species), gathering near the inlet in preparation for spawning. 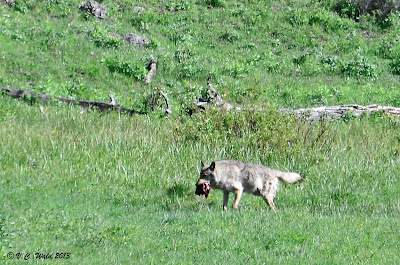 The female alpha wolf of Yellowstone's Lamar Canyon pack, known as "Middle Gray" hauling brisket of elk back to her pups. 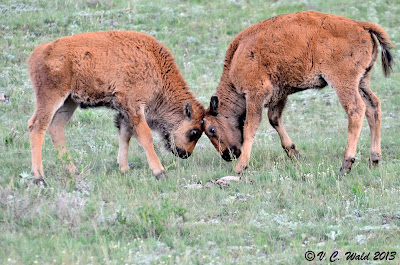 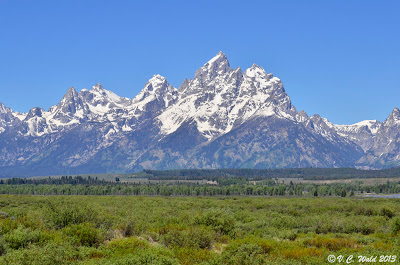 Life, and Death, and Life in Yellowstone

The miracle (or I should say, one of the miracles) of the greater Yellowstone and and Grand Teton world is that it can be so utterly refreshing and restorative, removed and separate from one's daily life elsewhere on the planet, and within an instant dramatically compel re-examination of one's emotional equilibrium and moral assumptions. This June we were fortunate (yes, that is the word I want) to twice witness the enactment of one of the Circle of Life's most enduring events: the interaction of predator and prey. Such scenarios are always a reminder that while it's one thing to sit in front of a TV watching a nature show depicting African lions taking down an impala, far away in time, space, and psychological impact, it's quite another to be standing "real time" in Yellowstone watching a black bear zigzag determinedly through sage brush searching out the mule deer fawn its nose tells it is hidden there, flat to the ground and motionless, as the fawn's mother panics, attempting everything she knows to derail the determined predator's mission.
We came upon this scene at the turnoff from the main road to Roosevelt Lodge, where we were staying. Arrayed in the large parking lot at the intersection, itself an unpretty but necessary destination with its vault toilets, an enormous bank of recycling bins, gas station, and rangers office, were a hundred onlookers, cameras and binoculars aimed at the sage where a black bear's nose would pop up to gather molecules of scent, trying to hone in on the location of their origin,only to disappear in the brush and rise again seconds later, yards away... 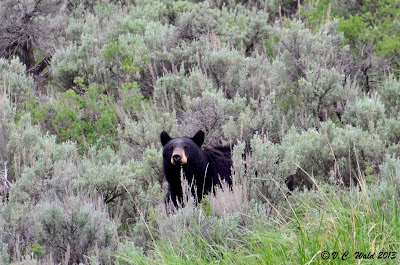 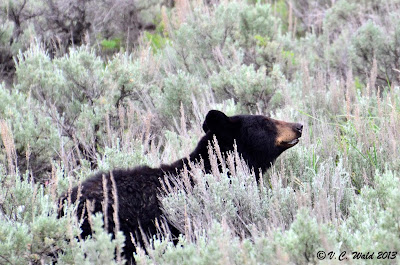 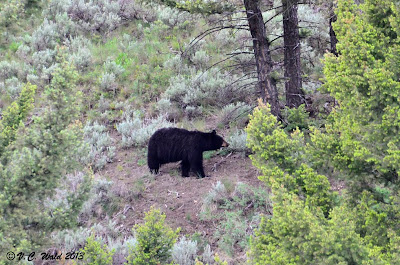 ...while a mule deer doe, acutely aware of how the situation was unfolding, charged the bear, ran between it and her child, paced frantically, running toward and from the bear in the hope it would follow her, then repeated her efforts, at a loss for what else to do. 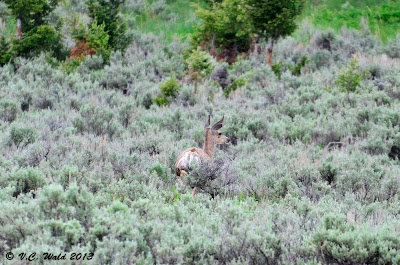 Not initially succeeding in its olfactory efforts, the bear rose on its hind legs in an effort to locate the fawn visually: 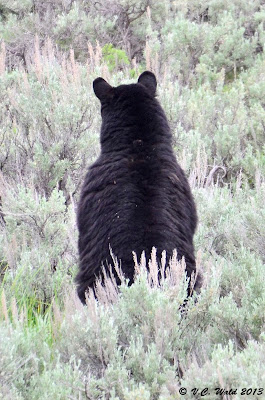 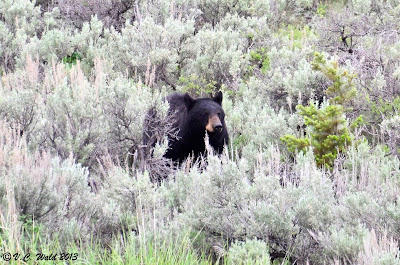 Finally, after more than twenty minutes of this tense drama, the bear plunged into the tall sage where we could not see it from our stance, and then we heard the tiny scream. The assembled audience gasped and went quiet, only to clearly hear the second, and final scream. It was over, and the doe knew it. 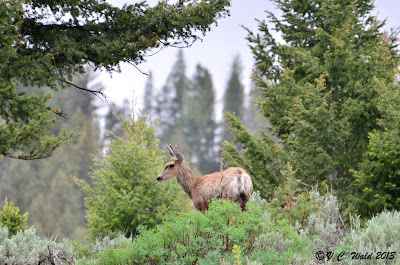 We did not see the denouement itself, as the bear hunkered down on its prize out of sight. The mother cried in the way wild animals do, silent and still. Someone later saw the bear drag the remains of the little carcass away; the doe was still in the area when we departed the park a few days later.

What we had witnessed is a daily occurrence in the wild: an animal, a deer, invests enormous amounts of biological energy in producing and then nurturing offspring; then suddenly, within a few minutes, another animal has purloined all of that energy for its own welfare and that of its offspring.

Then one evening we were meandering up a mile or two of gravel road in an area that happens to be among the most beautiful in the park. The ridges and valleys and narrow canyons also form a bottle neck between two vast open spaces, and thus offer the chance to see concentrations of wildlife, including, often, wolves. That was not to be our fate this evening though. As we turned around and headed back, we saw a car facing in the opposite direction pulled up close to the edge of the road; the front door was open so all we could see there in the grassy sagebrush was the busy movement of something furry, so we too stopped to look. What we saw was this creature, an American badger. Badgers are very close to the ground, with beautiful striped facial markings, and a snout (usually with dirt on it, as in this case) and powerful forepaws designed for digging. 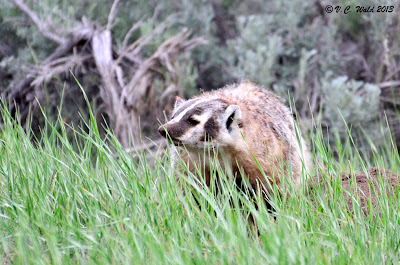 Badgers are underground burrowers, and this one had an agenda: 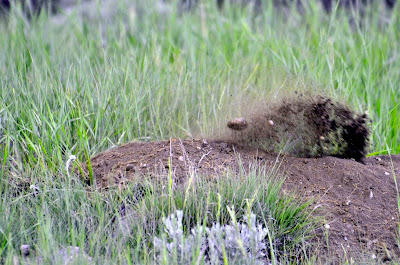 It was obviously committed to its task, as it was within only a couple of feet of the edge of the road, where by now about 15 watchers had assembled. In spite of the albeit respectful human presence, it continued excavating furiously.

Someone happened to look away from the badger's work (one should always pause to look around when so focused on wildlife activity, it pays off in all kinds of ways) and pointed to an all but unnoticeable hole in the gravel road. What we saw was remarkable: one after the other, four mouse-sized animals, almost the same color as the gravel, literally popped out from the hole, landing nearby on the gravel. I thought they were mice, but on close inspection, they proved to be infant ground squirrels.

They were so young their eyes were still sealed shut, and they could barely walk. 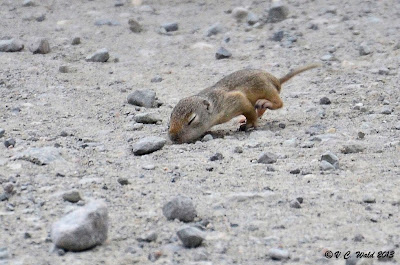 This one made it to the side of the road, but there hit the limit of its capacity to ambulate. 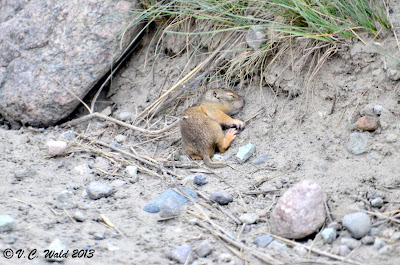 The mother was not to be seen, but we presumed she had ejected her pups from their burrow in reaction to the badger's vigorous adjacent efforts to reach the tunnel where the babies were nesting. At this point the badger had quietly disappeared into its hole, so all eyes were on the ground squirrels. Lots of us took photos; even Bob Landis, the renowned cinematographer, happened to be there (he's almost always in the park, which is how he captures some of the phenomenal action that he does), so I know some truly first rate footage exits of the little creatures.  But since we were all experienced wildlife-watchers, and have it deeply engrained in us that one does not interfere with Mother Nature, we all stood around marveling. Nobody took any action, even in the full knowledge that once we all dispersed, the next car to come down the road would have no chance of spotting the pebble-sized pups before squashing them. Then finally, a man leaned over and one-by-one picked them up in a paper towel, setting them down in the grassy sage at the side of the road.  Not 5 feet from the badger's hole. Still, no one said anything -- certainly no one criticized him for what he did, and in fact probably many were relieved he had done it. Not knowing what else to do in the fast-fading evening light we finally all did disperse back to our cabins and tents and campers, all with the unexpressed knowledge that we had just made it easy for the badger to get its tender ground squirrel meal, and perhaps to provide a nutritious meal to its own offspring.

The so cycle of life, and death to enhance the chances of other life, goes on.
Posted by Veronica Wald at 9:29 PM 1 comment: