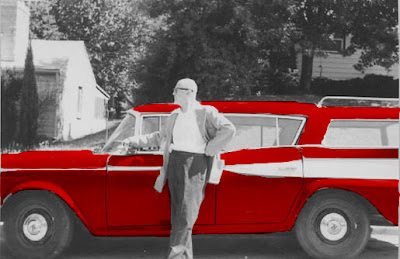 My father, next to our 1959 Rambler Ambassador station wagon, a la PhotoShop. Yes, the car was bright red, with a white blaze on the side. Too bad (or, maybe it's a good thing) I don't have any photos of its predecessor, our very own pink Plymouth sedan.
With my thanks to Regina Antique Auto, Members' Rides, for the image of a pink 1956 Plymouth!

I'm not lost, strayed, or stolen 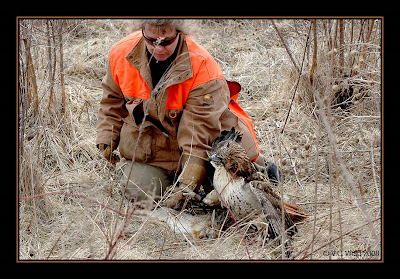 So here's what I've been up to, in a nutshell:

1. I participated in Lady Hawkers 2008, this year's annual fund raiser for SOAR (Save Our American Raptors) about two hours from Chicago in middle-upper-Illinois-beautiful-heartland-
breadbasket Earlville. This is a terrific event in which a bunch of women start by eating high fat, high calorie breakfast, and lots of it, followed by pulling on our hunting duds, gathering the hawks, and heading out to a quiet field, beating the bushes for cottontail rabbits, and yelling "HOHOHOHO!" when one is flushed to draw the attention of the hawk being flown (they normally fly up to a high vantage as soon as the falconer removes their hood and releases them). The hawk plummets very fast and calculatedly to intersect the rabbit's panicked trajectory. Usually three out of four stoops fails. This year we had only one bird, a female red tailed hawk named Niña, handled by Carolyn S. Niña caught her first and only bunny within 5 minutes of release. Carolyn released her again after collecting the bunny and giving Niña a little meat. We continued to beat bushes for another hour, flushing many more rabbits, but our hawk showed only polite interest. In spite of the cold, it felt absolutely wonderful to be tromping around outside in the early spring sunshine.
After hawking and a group shot of all of us looking a pleased mess, hair and socks full of burrs and boots all muddy, we head back to SOAR for an enormous pot-luck lunch, followed by much rowdiness and perhaps a little beer...and a raffle. Everybody donates stuff to the raffle. Usually there are a fabulous book or two, falconry bells that I've always wanted to draw but haven't (yet), original art work by one or another of the talented Lady Hawkers, and other unexpected goodies. This year someone must have robbed a hardware store because there were at least a dozen flashlights of different kinds: nice lantern-types for surviving blackouts, traditional torches, and so on. Many of us, including moi, scored several flashlights. Oh boy. It's lots of fun and earns a few bucks for SOAR, run by my friends, the tireless and charming Berni and George Richter.
2. Not long after returning from Lady Hawkers, and coincidentally it turns out, I came down with the world's worst case of viral enteritis. I have never, ever been that sick. I am now 99% recovered, due to the judicial application of a key controlled substance* and pure orneriness (mine). I actually missed two days of work and was mistaken by all for the Walking Dead on the one day I did go in.
3. I’m enrolled in Intermediate Manuscript Editing through the Graham School of General Studies at the University of Chicago. This is the second required course towards the certificate in editing. I so greatly enjoyed the introductory course, taught last fall by University of Chicago Press editor Erik Carlson, and if anything am enjoying this course by his colleague, Susan Allan, even more. I have good instincts but poor ability to remember specific rules (as dictated by the Chicago Manual of Style) but it’s all in the trying. Plus the course, three full days in a row, is at the University of Chicago’s Graduate School of Business’s Gleacher Center at the foot of the Magnificent Mile, and it’s just perfectly beautiful. All of this leaves absolutely no time for other virtuous behavior, such as housekeeping. Hurrah!

*By physician's prescription for the occasion, of course.

Posted by Veronica Wald at 7:37 PM No comments: