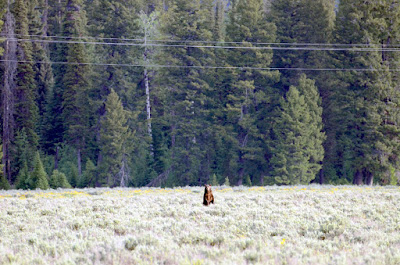 The female grizzly bear known by her wildlife management number as "399" has raised family after family of cubs near the roadside at the northern end of Grand Teton National Park since her first set of triplets in 2006. The rate of survival of her cubs has been extremely low; some disappear between their first and second years due to natural, but otherwise unknown circumstances (as is very common in grizzly bears); some have reached liberated adult status (shortly after emerging from the den following the second winter with their mother and sibs) but then gone on to be shot by hunters, hit by cars, or “humanely removed” (euthanized) after one too many encounters with human spaces. One of them, "610," is still in the area and bearing litters of her own.  She was one of the three cubs born in 2006. 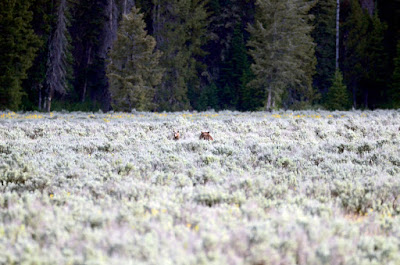 399 herself is 20 years old, which is up there for a wild grizzly; her first litter (preceding 2006) consisted of one cub, then each subsequent litter was three cubs. This year when there was concern that she might not appear at all, or that she might no longer be fertile, she brought joy to everyone by emerging from the den with one light-colored baby (cub of the year, or COY) that was dubbed "Snowy" because of its pale coloration.
Each year 399 has had triplets, starting in 2006 I've been fortunate enough to see and photograph them. Sometimes conditions for photography were very poor, but I still documented the sighting.
This year I saw 399 and Snowy only once, briefly, at many yards distant and got off one shot each of them standing in the sage.
Exactly five days after these two photos were captured, Snowy was mowed down by a vehicle and killed. The circumstances are not known because the driver did not report the incident as is required. He or she may not have known what it was they hit, especially if the cub ran under the wheels rather than in front of the vehicle.
Regardless of how it transported, this loss caused great sorrow to me and to 399's thousands of fans world-wide. And was yet another blow to maintaining the fragile population of grizzly bears in the Greater Yellowstone Ecosystem.
Posted by Veronica Wald at 9:41 AM 2 comments: