Discouraged but Not Hopeless

Since 2006 I have been following the fortunes of a grizzly bear sow (female bears are referred to as sows, following, unaccountably, nomenclature applied to pigs) known by her wildlife management number 399, who makes Grand Teton National Park her home. At that time she was 10 years old, and appeared close to the lodging and services area at Colter Bay with three new little cubs-of-the-year (COYs), her first litter after losing one cub some years prior. Miraculously, I got a couple of good photos of the charming family and blogged about them the following year. 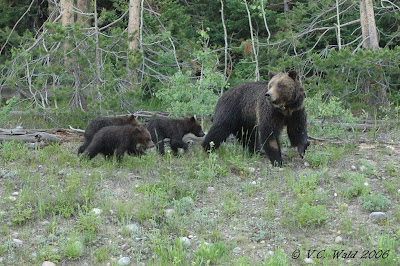 Mating takes place in June or July, but the fertilized eggs do not implant until about the time the mother settles into a den to sleep for the winter; if she's accumulated sufficient body fat, the embryos will develop and tiny cubs will be born in mid-winter. The sow, with her COYs who have for several months been sustained only by her milk, emerge from the den in the spring as food supplies return. Since bears are omnivores, in the Yellowstone-Teton region they often acquire their first protein replenishment from the carcasses of animals that have died overwinter ("winter kill") but they also take major nutrition from plant and insect resources. When the ungulates start their birthing periods in early summer, the bears again take advantage of the protein available from the nearly helpless infant deer and elk. And so it goes through a first summer, followed by hibernation as a family, and a second summer, sometimes even stretching to a third winter before a sow chases off her nearly grown cubs, not infrequently in response to the presence of boar (male bear) that then allows her to become fertile again. In 2008 we happened upon two of 399's recently liberated cubs lingering in their natal territory for a while, in spite of the risk in particular from the male seen courting their mother.

Grizzly reproductive rates can be low. It wasn't until the summer of 2011 that 399 appeared at Colter Bay again, this time with three more COYs. Photography conditions were poor -- we saw them only once, very late in the evening -- but I did manage to document the sighting in this shot of her with two of the three cubs in the frame: 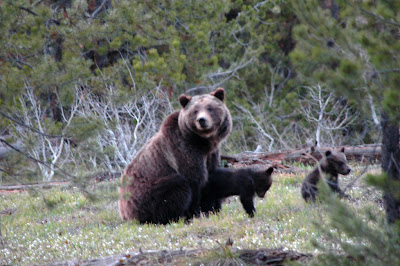 In fact it's fitting that she's shown here with just two, as later that season reliable witnesses reported that one of the three was adopted by another grizzly sow, known by her number 610, none other than  the female from 399's 2006 brood. 610 had carved out her own territory farther south in the park, appearing that spring with two cubs of her own. Although in 2012 we were fortunate to view two of the cubs raised by 610, we weren't able to photograph them because of the distance and their location in deep brush.

We recently returned from our annual journey to the area, and voilà, who should appear at Colter Bay but 399 with a brand new set of triplets! Although they were probably more than 100 yards distant, we spent several hours watching and photographing them. I failed to get all three cubs in the same frame with their mother with everyone's faces showing, but rest assured, Mother Bear was not more than 50 feet away. 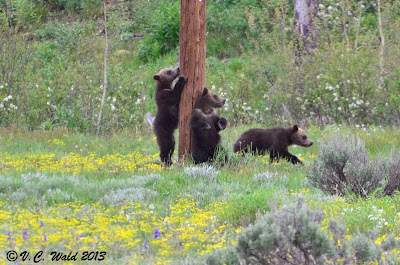 The kids made a major toy of the telephone pole. 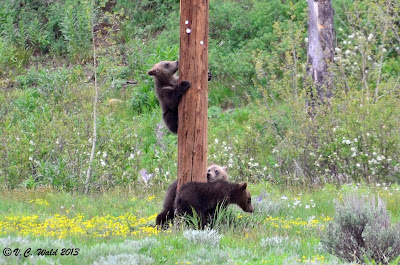 It was hard to take our eyes and cameras off these magnificent animals, who were apparently unperturbed by their albeit well-behaved audience. It was bear-watching with a view, to be certain. The large peak to the right is Grand Teton National Park's iconic Mount Moran: 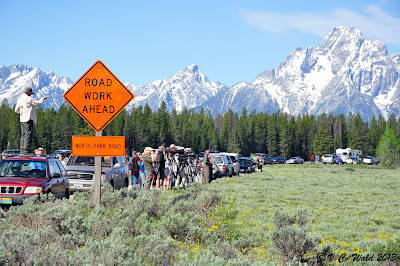 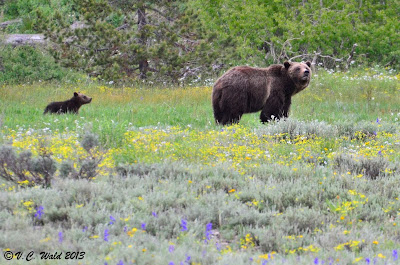 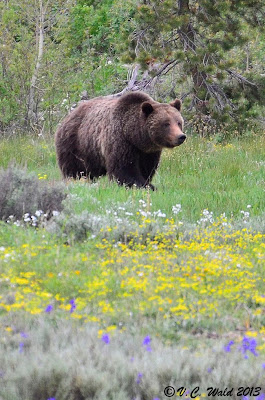 Young cubs, in spite of their mother's legendary protectiveness, are very vulnerable to hazards such as being washed away in a rushing river, predation by male bears, and of course the simpler things like birth defects and bacterial or viral infections. When they leave their mother's care early, as one of the 2011 cubs is thought to have done, they are not typically sufficiently skilled at acquiring food to survive long on their own.

But if they dwell close to human habitation as these bears do, their risks are multiplied many-fold. Another 2011 cub was hit by a car; one was killed illegally by a hunter, and 587, of the 2006 litter, was legally euthanized this month for persistently predating on domestic livestock.

It's not often that one gets to see an individually identifiable wild animal and to appreciate her family life in the way I have watched 399 over the last 8 years, and it's easy to take emotional ownership. It has been very been difficult learning about the loss of each the cubs, especially those whose deaths resulted from interactions with people that would never have occurred were the bears living in true wilderness. One hypothesis as to why 399 brings her young cubs into the presence of man is that aggressive boars may be less inclined to bother them. How ironic that her survival strategy is the very reason so many of her offspring have died before they themselves were able to contribute to the fragile grizzly population of the Greater Yellowstone Area.
Posted by Veronica Wald at 8:00 PM