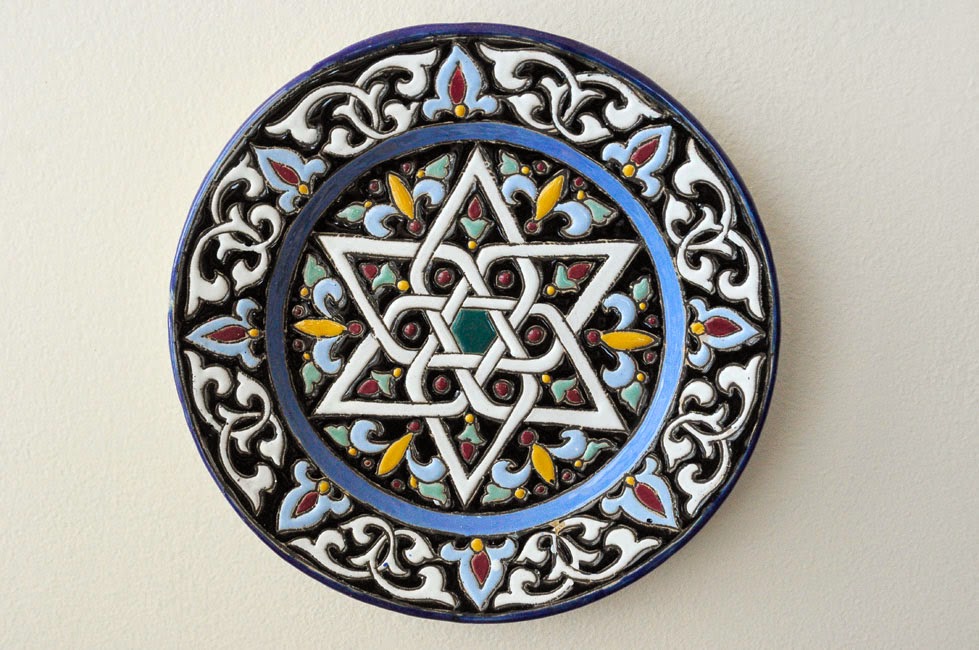 In 1963-64 (8th grade for me) my mother spent the year teaching teachers of English in Madrid, with me in tow. As I've remarked before, one of the things I most enjoyed about that year abroad was the exoticism of the shopping opportunities. In those days, foreign wares were not so readily available in the United States, and, at the age of 13, I found the European traditional and contemporary objects to be wonderfully new and appealing.
In Spain the specialties were strongly regional; a well-known example is Toledo steel, made into jewelry and knives for the consumption of tourists and serious collectors alike. Spain is also known for its regional ceramics and pottery styles, sometimes realized as decorative objects, famously lovely tiles, or colorful usable objects such as table ware.
Another of my most valued memories from that year is our visits to the many historic meccas around the country, among the most enjoyable to the town of Granada, site of The Alhambra. Spain was once a colony of the Muslim world; the North African Arabs and Berbers who occupied much of the Iberian peninsula are referred to as Moors. Moorish culture dominated the Andalusian region from 711 until 1492, and left its aesthetic and cultural marks in many ways. Granada's Alhambra, the massive and stunningly beautiful fortress-palace left by the Moors, is an overwhelming do-not miss should you find yourself in Spain. Although this photo of my mother taken there (doubtless by me, already in those days a camera-toter) is badly faded it is possible still to make out the incredible lively and romantic architecture and decorative style. Many of the fine details are in fact the written word from the Koran. It's truly extraordinary 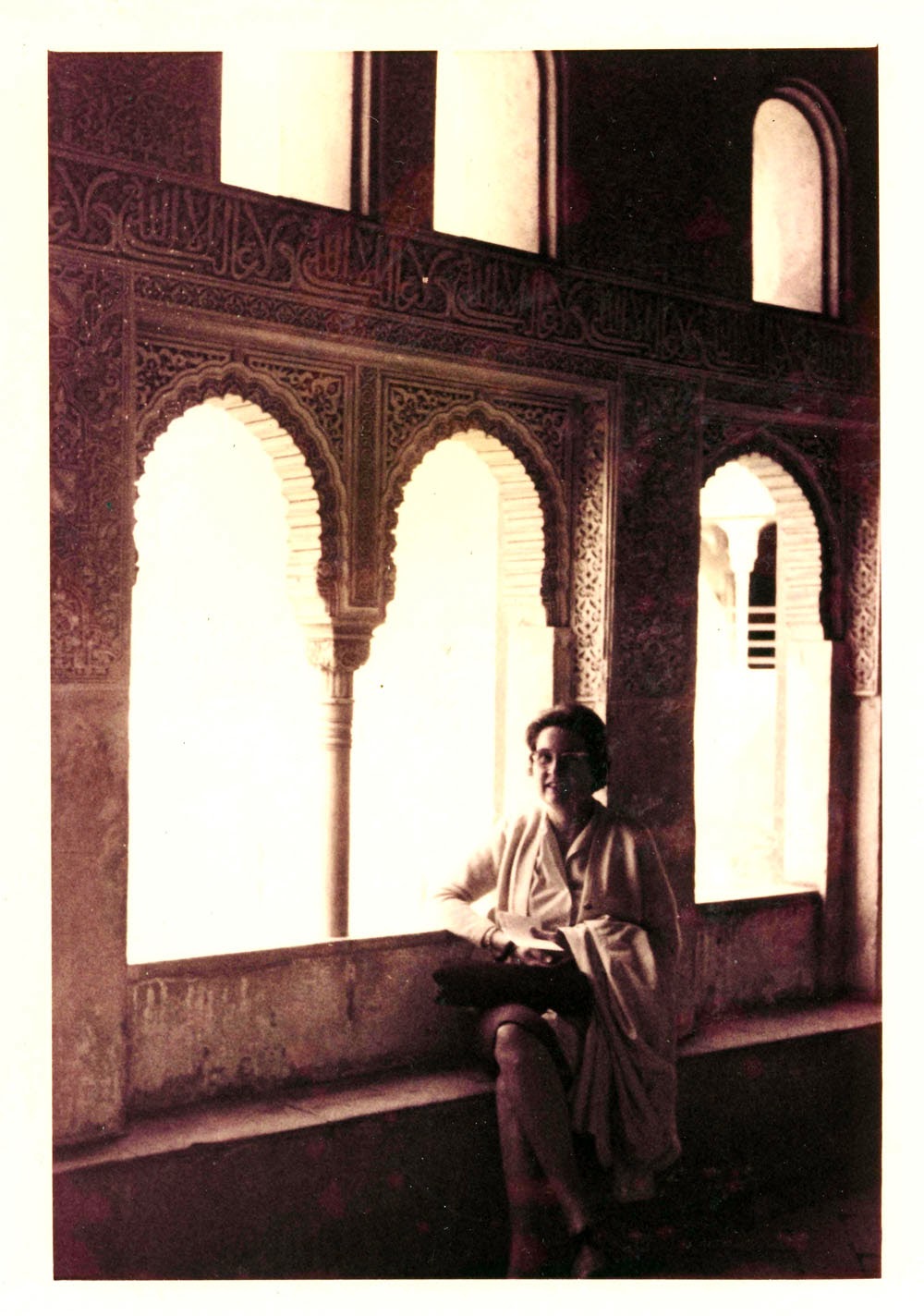 Modern takes on this decorative and symbolic tradition are used in the locally produced ceramic wares, known as the "Andalusian" style. On that visit we bought a set of eight plates of varying designs made by Granada's Cerámicas San Isidro that take great advantage of the local symbology. Granada means pomegranate, and the fruit's image is everywhere, as in the middle of this San Isidro plate.What is most interesting about this design (and the starred plate above) is that the star is six-sided, like the Jewish Star of David. The Muslim star is five-sided. Intentional or not, I'll never know. 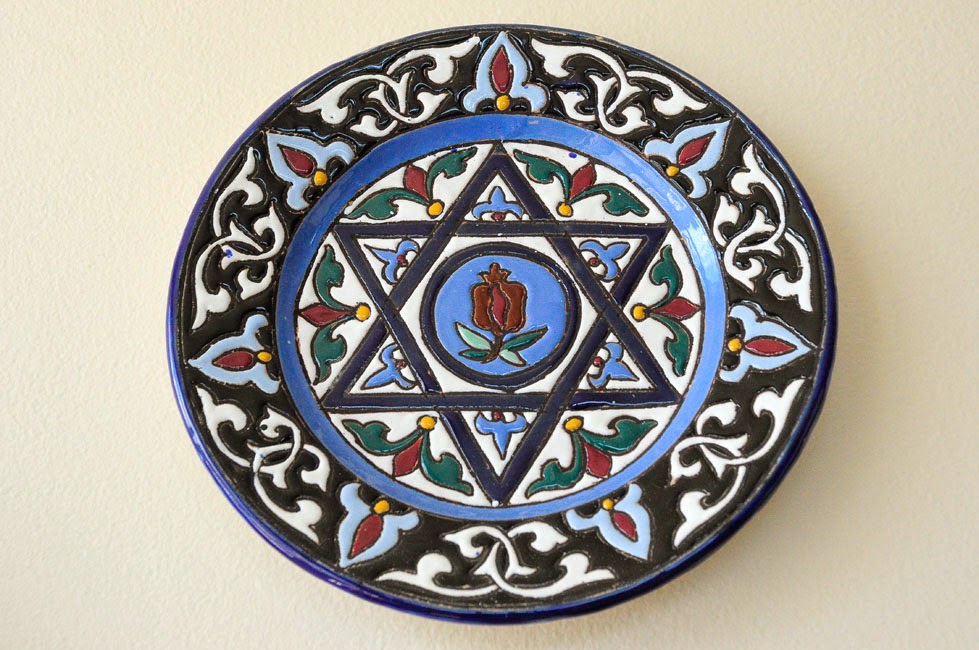 It's hard to photograph pleasingly embossed texture of these 8.5-inch plates, but the designs come through well. 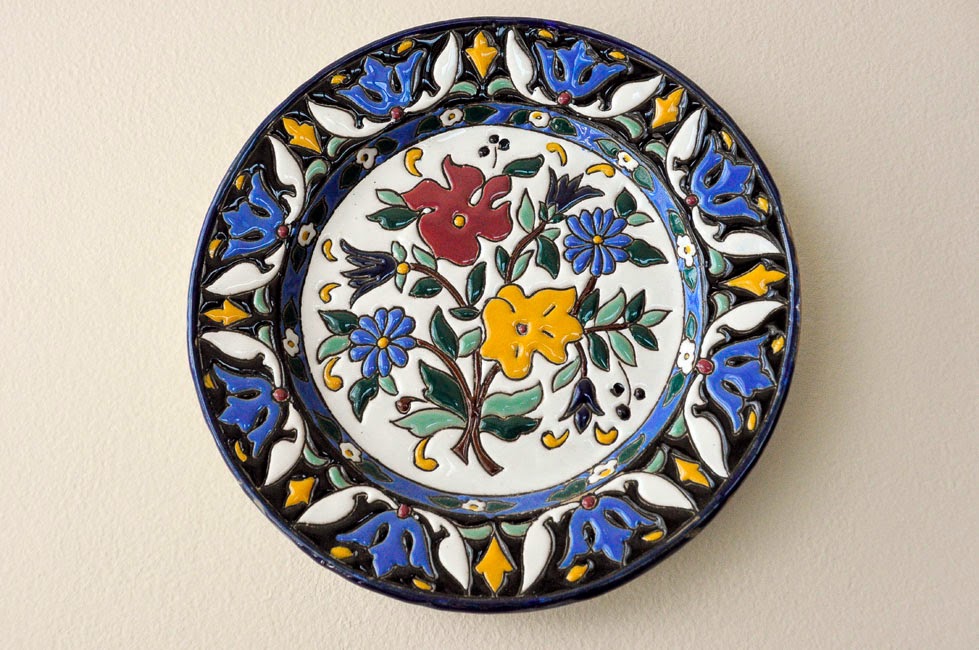 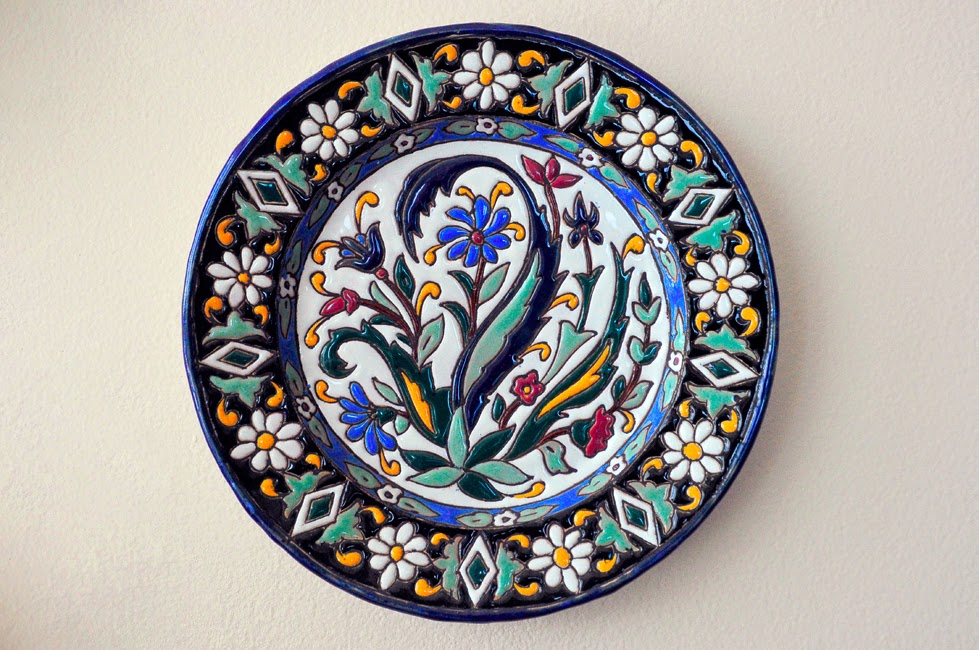 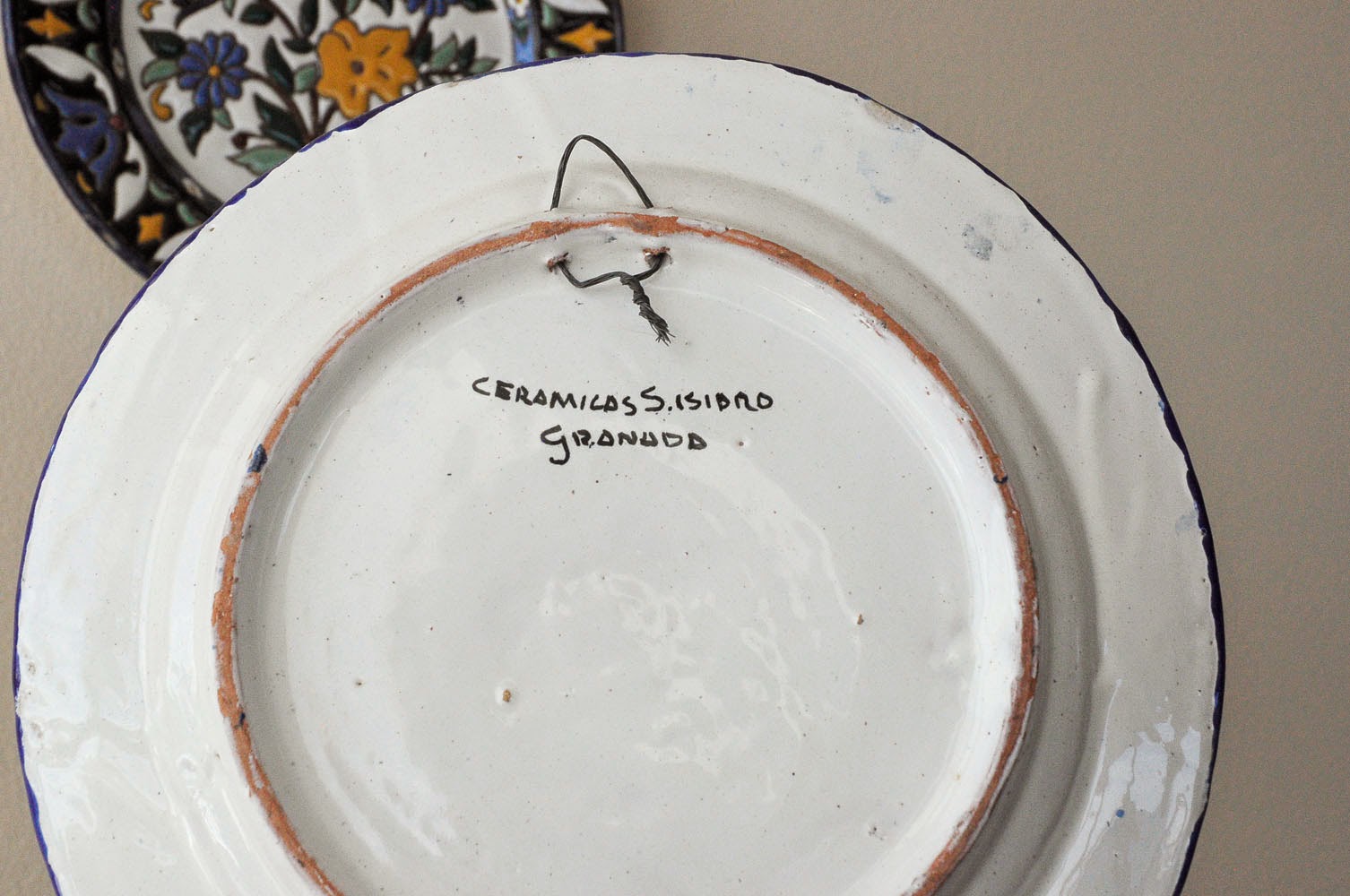 And here are the plates in a celebratory bon voyage slumber party for my classmates heading out for a school-sponsored trek to England, June, 1967. 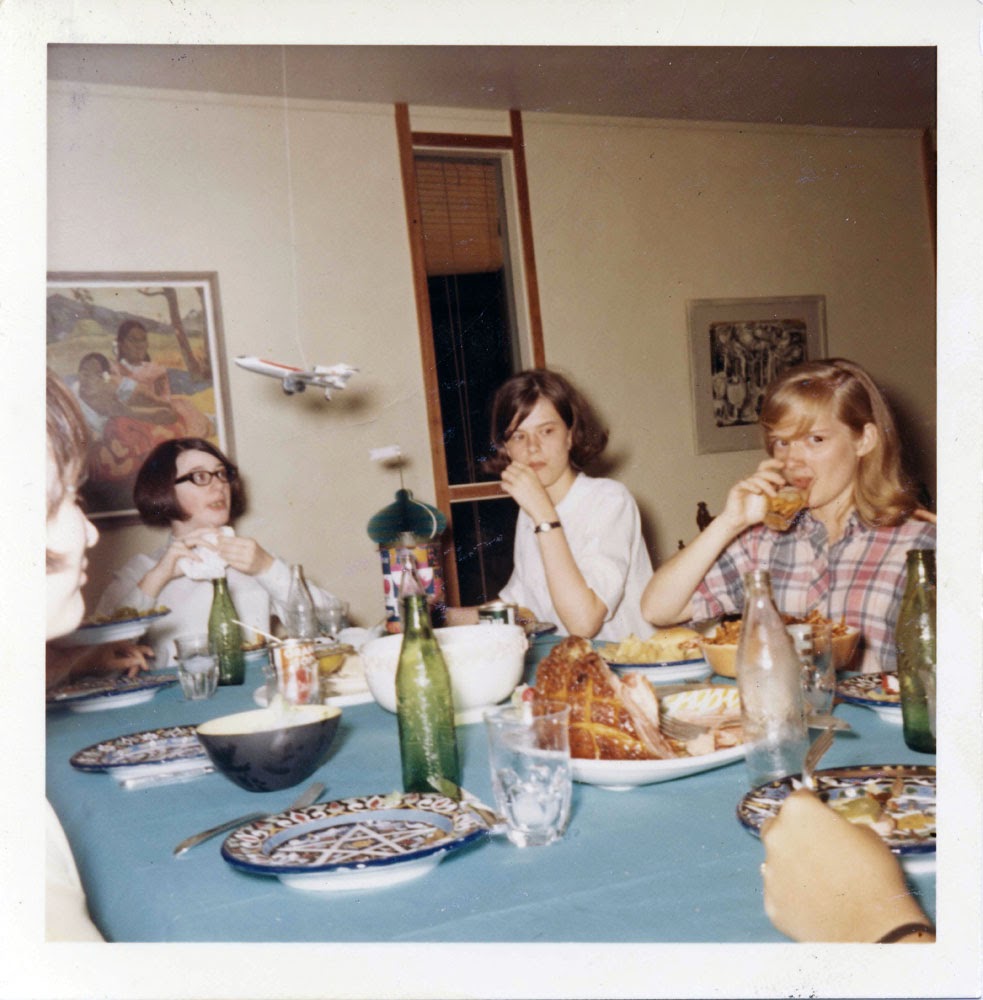 I don't use them to serve food anymore -- who knows how much lead is in the glaze? But they're quite nice arrayed in a small group on my living room wall, and allow me to reminisce about that wonderful long-ago year in Spain. 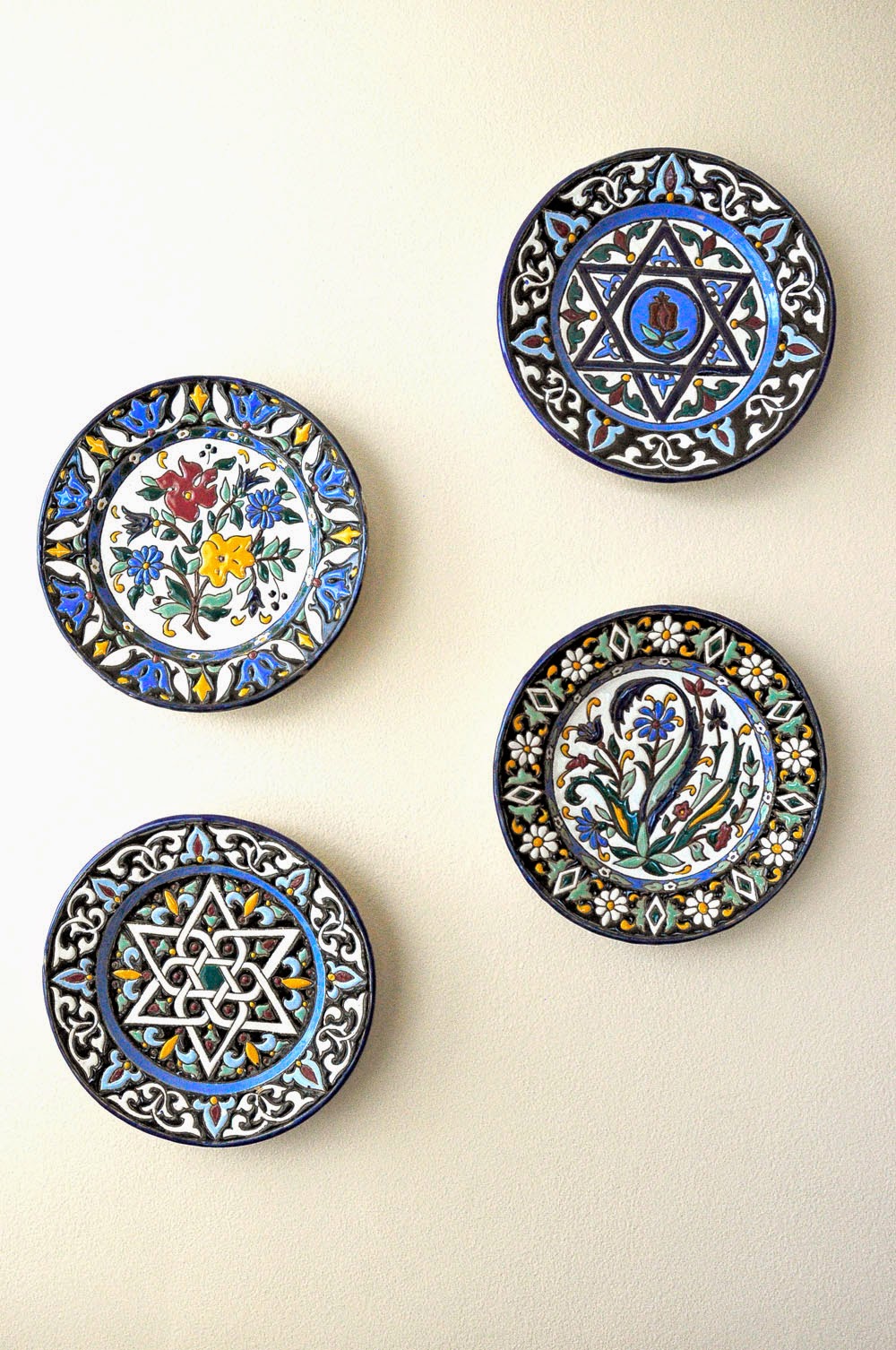 Posted by Veronica Wald at 8:18 AM No comments:

Lots of us have lots of stuff in our lives, but it's not often that we have a record of how, where and when it was acquired. My family spent the 1953-1954 academic year in Albuquerque, New Mexico, where we widely explored especially the Indian lands of the region, thereby making some important discoveries and lifelong connections. We were (and I am) great admirers of the arts and artisanship of the Pueblo and Navajo peoples. In the late 19th and early 20th centuries, their wares had become know nationally, if not internationally, through the enterprises such as Fred Harvey, boosted by the work of architect Mary Colter, among others. Even so, in the middle of the 20th century, their rugs, masks, wood and stone carvings, stunning jewelry, and pottery were still affordable for a young professor's family.
Acoma Pueblo, called as "Sky City" for its strategic  mesa-top location, is renowned now as then for its beautiful and finely made pottery. It's some 70 miles west of Albuquerque, right along Route 66 (now Interstate 40), the perfect day-trip from Albuquerque. Here is my mother in Sky City (with me, in the striped t-shirt) picking treasurers from their maker in November (it was very nice and warm, evidently!): 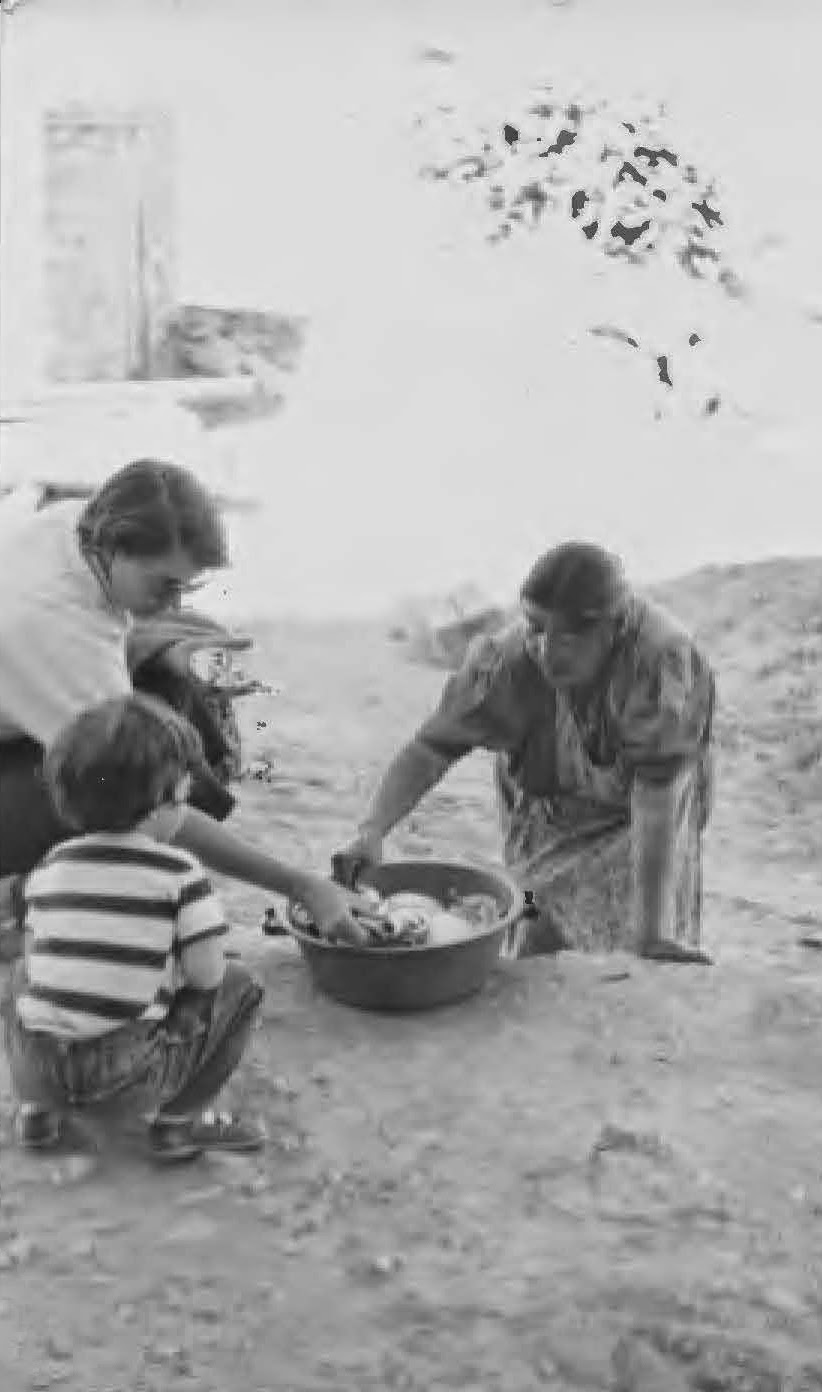 Same day, two Acoma girls, Anne Marie and Tilda Rose, pose with their offerings; note the classic humped adobe brick oven in the background to the right, and the adobe homes, with ladders to access the useful space on the flat roofs. 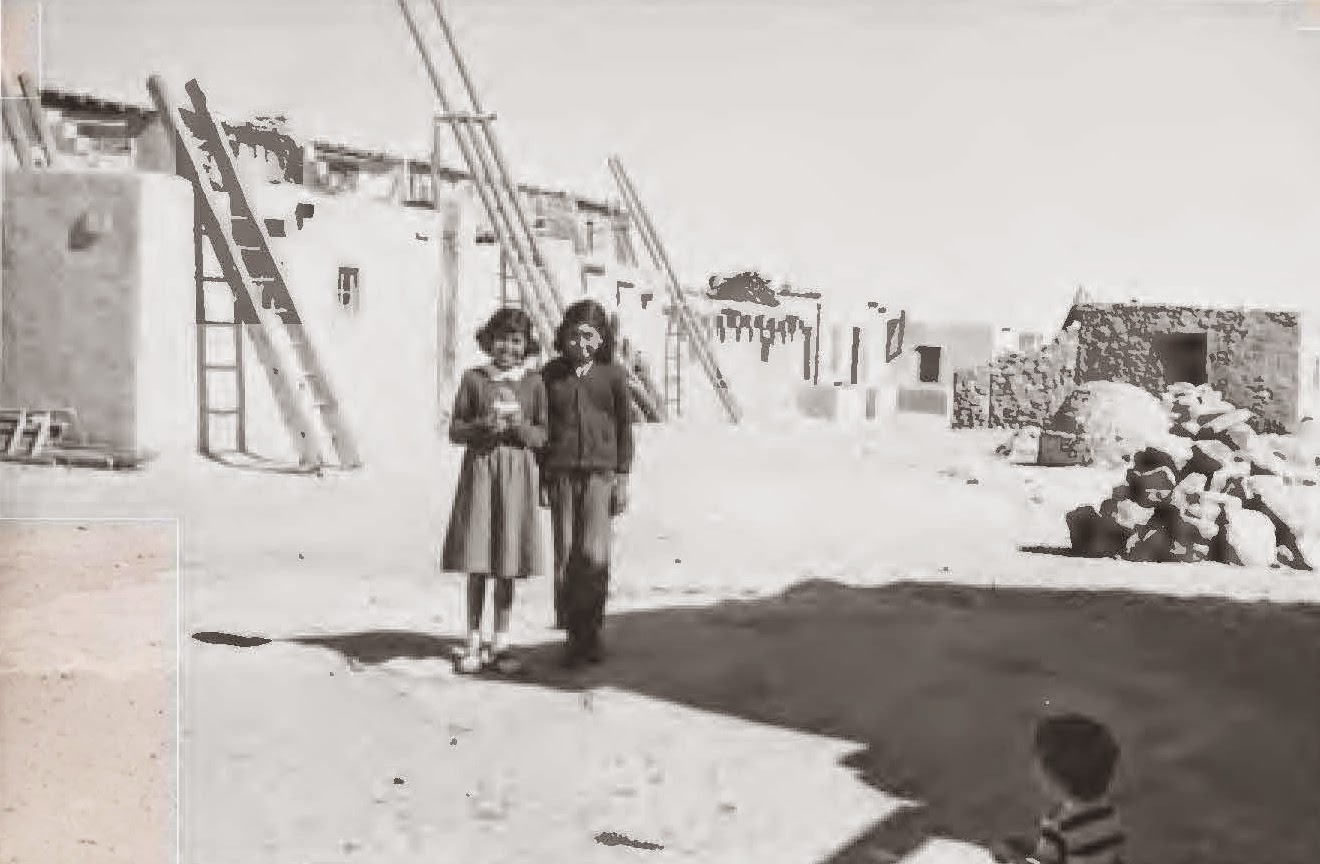 What Mother brought home included one small dish that was meant as an ashtray, that crashed to pieces, under my watch alas, quite a few years ago. Another prize was this small "eared" pot painted with a different abstract, but historically faithful, bird motif on each side. Its hand-coiled, wood-fired character is evident. 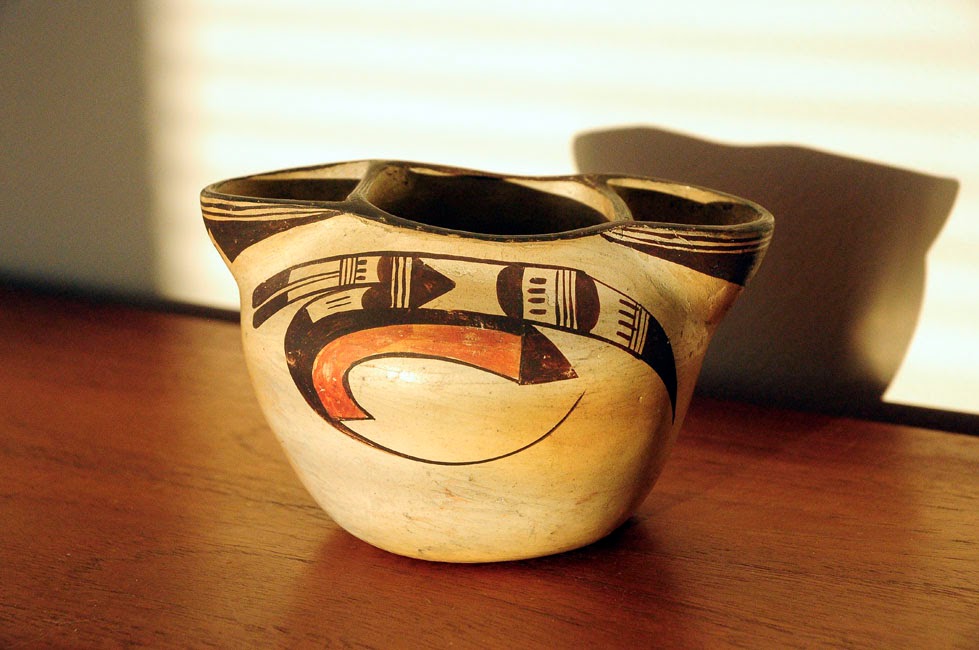 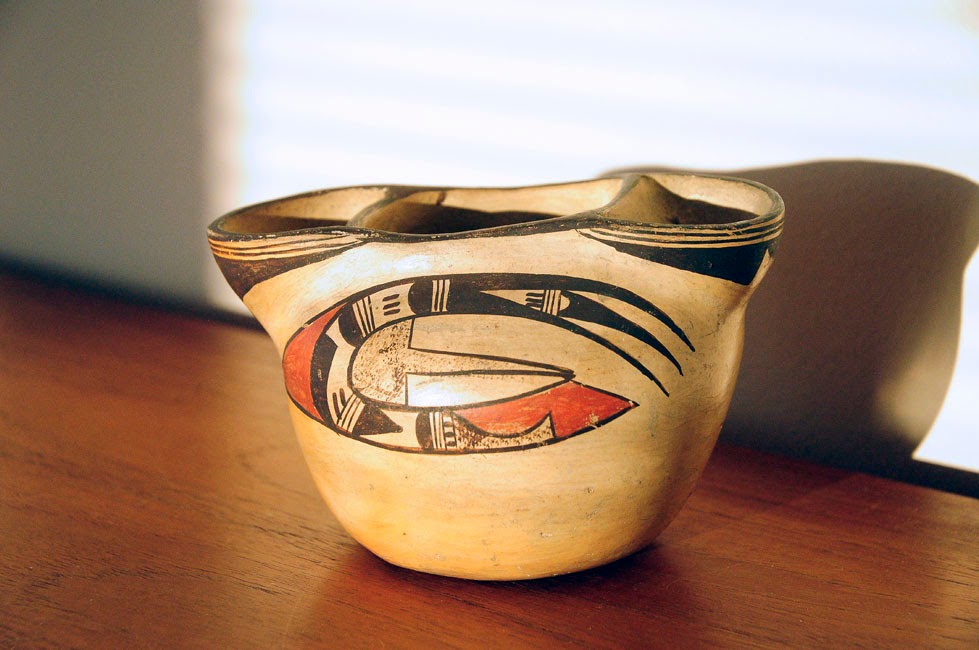 While rustically very appealing, it was comparatively primitively made, with thick walls and base. Which is almost certainly how it's managed to survive unvanquished all these years.

Another acquisition of the day, and of the same scale but a different, though also traditional, decoration, was much more delicately shaped and painted. The form is called "olla" (pot, in Spanish): 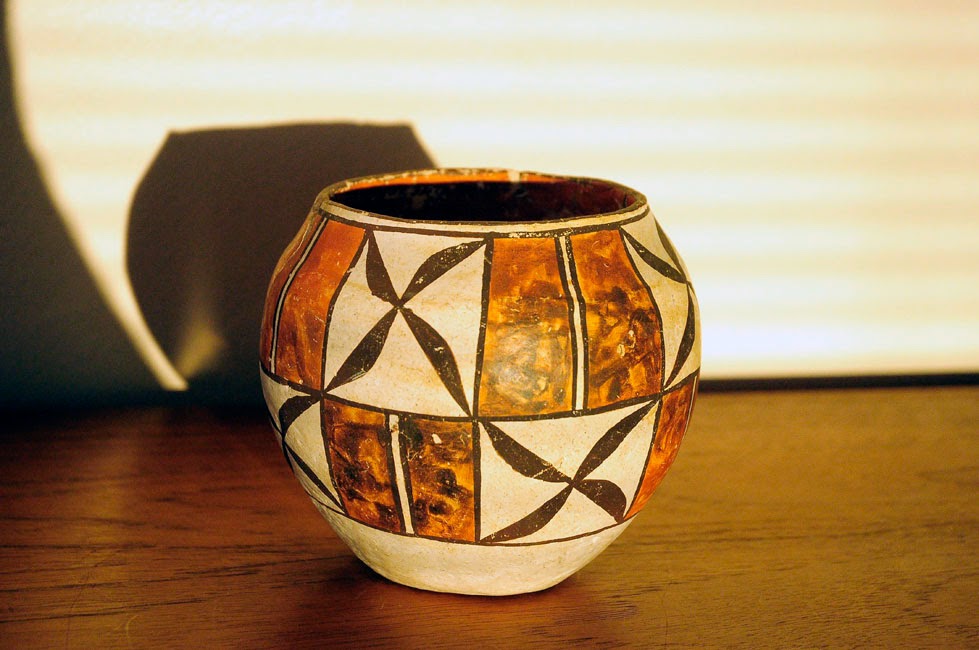 Through time though, it paid the price for its fineness. With the shards stuck firmly together with superglue, it has an (albeit faux) archaeological feel to it. 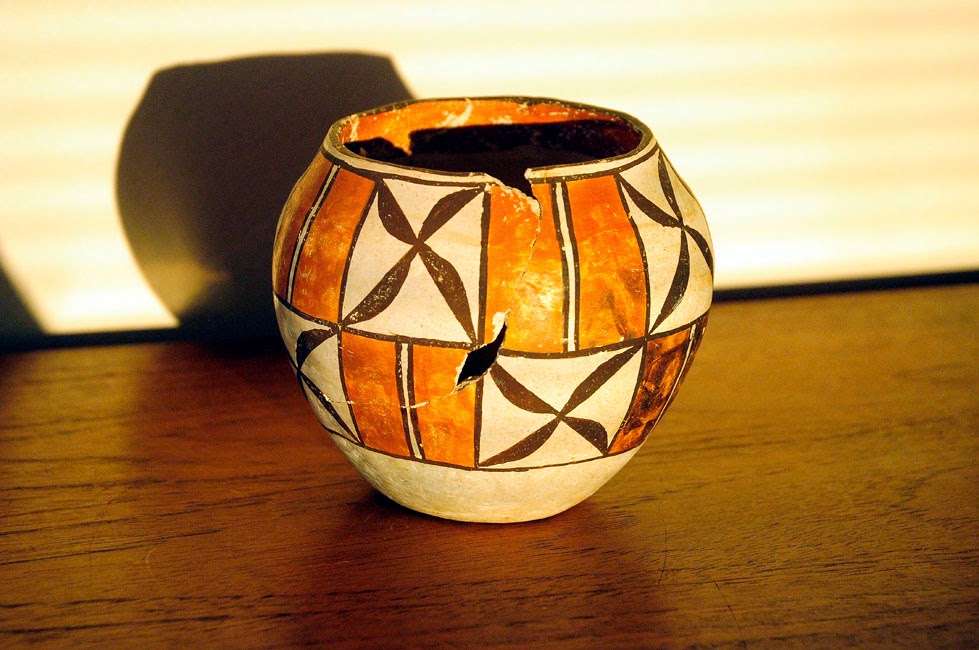 In the early 21st Century, spectacularly fine wares are still to be had. The people of many pueblos of the American Southwest, have perfected their ceramic arts. This is a traditional "olla" form, very similar to the "archaeological" piece above, but of a much larger scale and sophisticated painted design. It is signed "R. Victarino, Acoma." It was given to me by Puebloan friends in 2011. 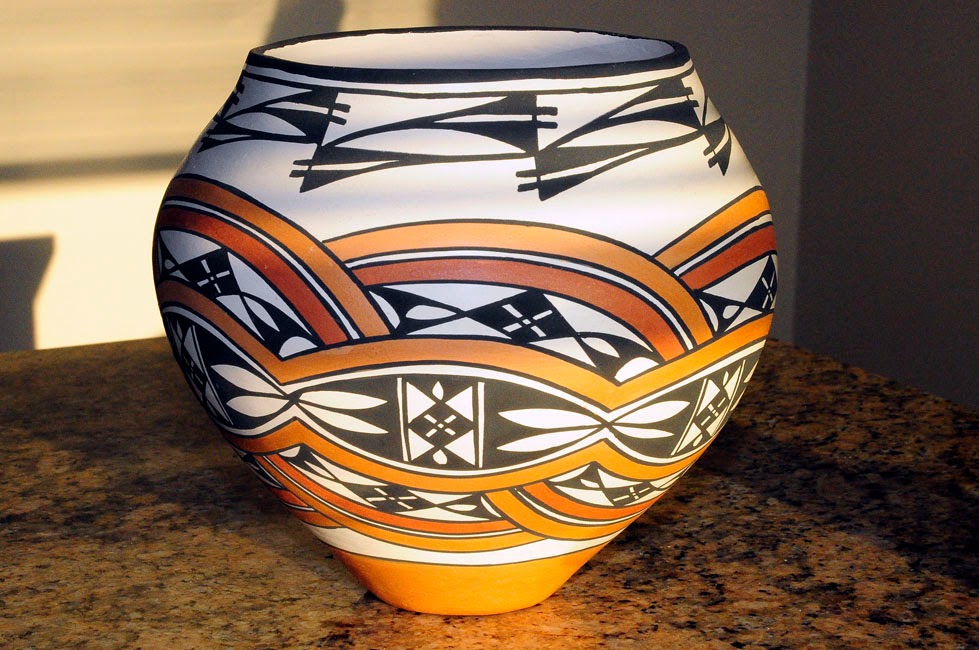 My friends also gave me this piece. The pot itself was not coiled, but made in a form. The skill is all in the painting. I love it just as much, though I don't know the maker. 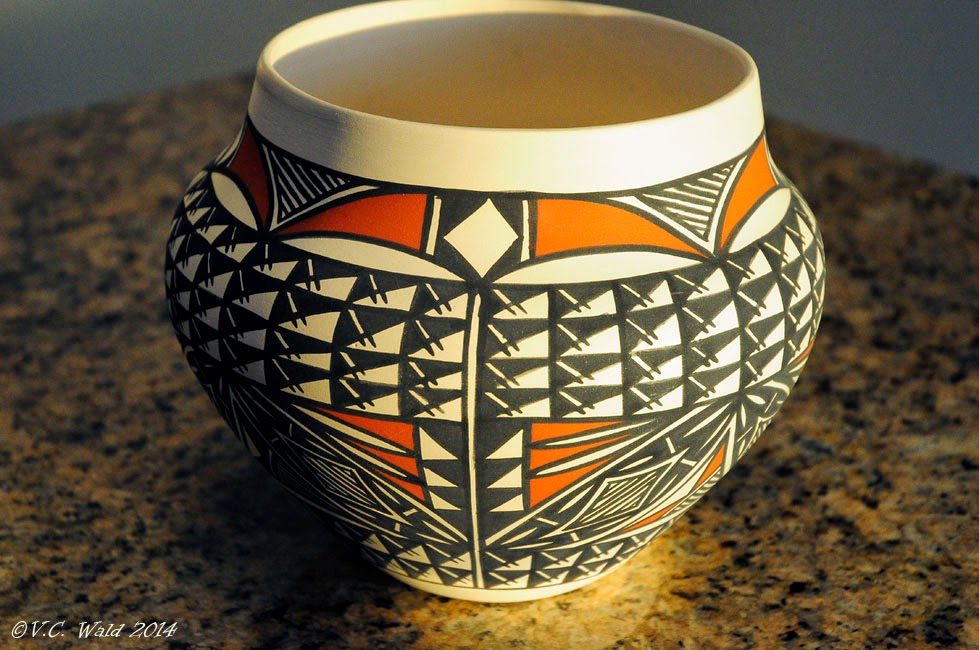 Indian pots, highly collectible for obvious reasons, come in all kinds of sizes, shapes and forms above and beyond the olla. Here is a display in the gift shop of the Heard Museum of American Indian Art and History, Phoenix, Arizona. It would be nice to bring them all home. 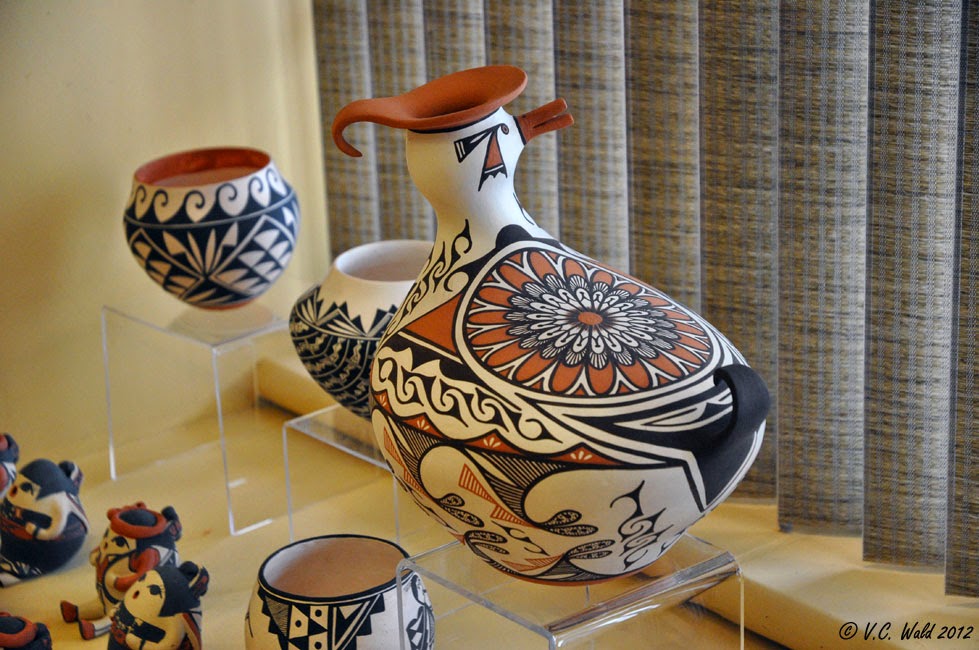 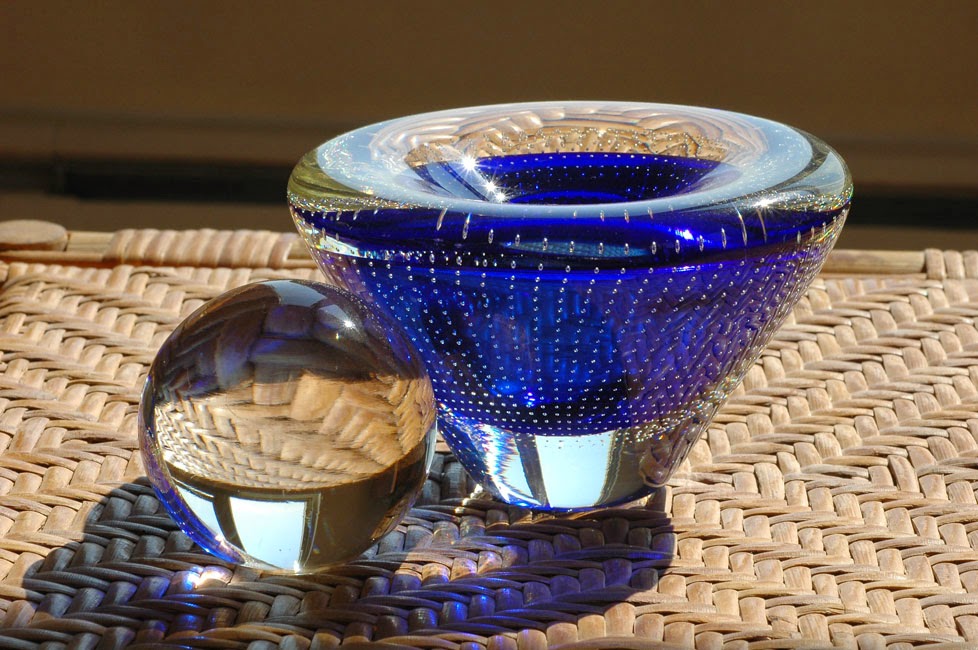 This is a striking cobalt blue vase in the "Serica" series, designed by Andries Dirk Copier of the Royal Leerdam glassworks in Leerdam, Netherlands. In Dutch this "controlled bubble" technique is called spijkervaasje.

I don't know the exact date but this style dates from 1936-1940. The brilliantly prolific Copier lived from 1901 to 1991.
The heavy crystal ball was once the top to a Leerdam decanter. The decanter is long gone but the ball looks very good set atop the vase, especially when gently rotated it multiplies the moving water effect. This was in my grandmother's home, and as a child (and frankly, as an adult) it fascinated me. I have always called it the fountain because of the wonderful regularly placed bubbles. I can't even imagine the skill that went into making this. 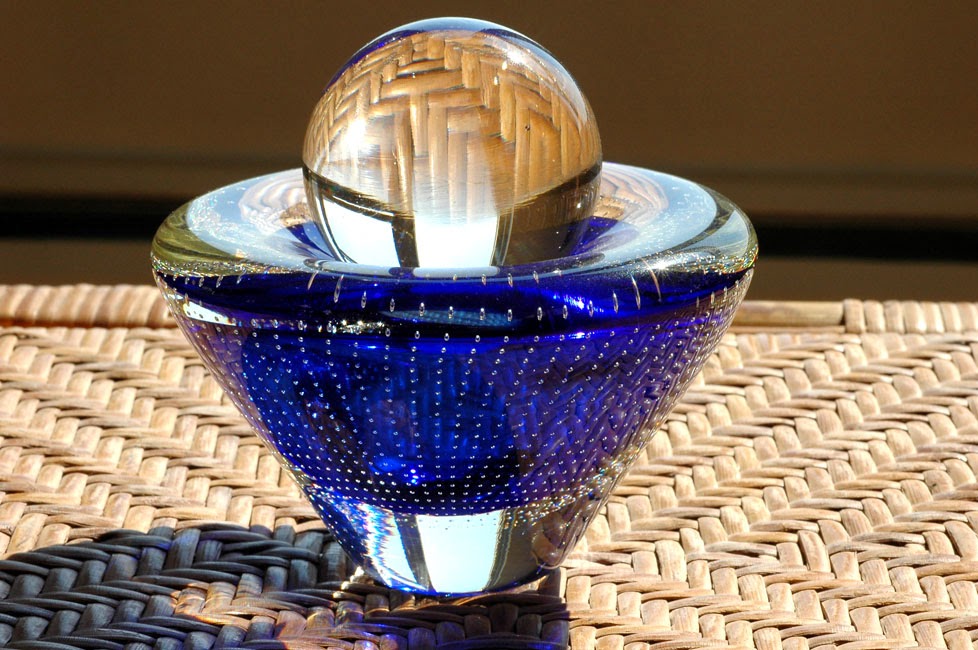