America Is Your Park campaign. Or maybe not.

In response to Troutbirder’s comment below, which was in response to my post of August 1, alas, I have to agree, there’s either something desperately wrong with Coca-Cola's "vote for your park" Web-site counter, or there’s something real funny about the voting. So I’ve stopped voting, and have rescinded my excitement about the opportunity to get a nice-sized grant for Yellowstone. The last time I voted, probably three weeks ago, Yellowstone had around 16,000 votes; today it has just over 19,000, while as Troutbirder notes, for example, Hawaii's Koke'e State Park now has 126,810 votes. I'm sure it's possible that Koke'e State Park has that many dedicated, voting fans, but it's certainly not possible that love for Yellowstone is that lukewarm.
But I really appreciate your efforts to post some votes for the most wonderful of all national parks, Troutbirder!
Posted by Veronica Wald at 9:14 PM 1 comment: 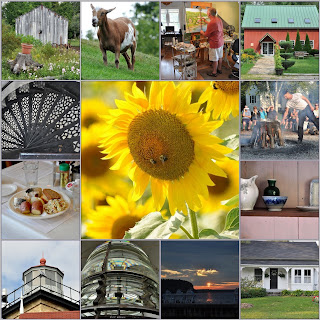 I plan to blog a bit, soon (!), about a wonderful long weekend in Door County, Wisconsin, but until I do, please enjoy the show (I recommend setting the "delay" at 4 seconds):

These days I'm not posting much

And when I do, it's only retail junk. Where there is always plenty of fodder for commentary.

Posted by Veronica Wald at 2:28 PM No comments:

Really, it's because of the crud that saps your imagination in very hot, very humid weather and from having to sleep with the air conditioner running day after day after day.
It's been very good for the bugs though. Photos taken in the botanical garden that is the joint effort of the University of Chicago and the City of Chicago Park District along the Midway Plaissance,  just across the street from my office building.

Here's a take on wildlife I bet you haven't seen before

Posted by Veronica Wald at 1:26 PM No comments:

Vote for your favorite National Park (as long as it's Yellowstone, Or the Tetons, Or both)

The National Park Foundation and Coca-Cola are encouraging Americans to be active outdoors in their national and state parks with the launch of the “America Is Your Park” campaign.  Through this campaign, an online voting center  has been created to let individuals cast a vote for their favorite park. The national or state park that receives the most votes by August 31 st  wins a $100,000 grant made possible by Coca-Cola’s Live Positively initiative. No sign-up or registration is necessary to participate and individuals can vote as many times as they want until the voting closes on August 31 st .

To vote, begin by clicking here . Then simply:

In addition, for every vote cast, Coca-Cola will also donate $1 to the National Park Foundation up to a total donation of $200,000."

Take care that Yellowstone (or whatever your favorite park is) comes up into the voting field. Great Smoky Mountains is the default, and it has already received tens of thousands of votes, where as of this writing, very surprisingly, Yellowstone, a favorite of many people world wide, is still to reach 10,000.  These grants are extremely meaningful to the parks that receive them. Please vote early and often, as we say in Chicago.
Thank you!! 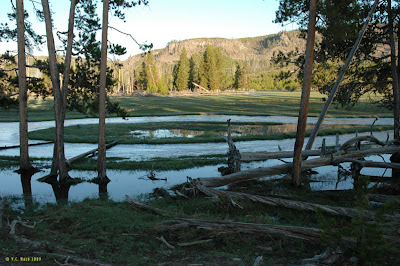 Meandering sloughs of the Firehole River
Yellowstone National Park, Early morning, May 2009
Posted by Veronica Wald at 9:18 AM 1 comment: