When last Sunday dawned clear, very tired of rainy day after rainy day confined in front of my work computer, I threw my cameras in the car, nudged the snoring KLK and Teddy the Cat to tell them I'd be back in a few hours (I'm an early riser, KLK is not, and Teddy gets back into bed to snooze away the rest of the morning with KLK after breakfast), and headed up Springhill Road, very close to home on the other side of the interstate and more and more rurally beautiful as it stretches for miles northward along the base of the Bridger Mountains. There's almost no traffic and certainly no competition for roadside photography space. Not far from the bridge over the interstate I spotted a pond full of white pelicans, managed to find a way around to the backside, parked/walked in mud, and got unceasingly screamed at by a red tail. The nest was so far up in an enormous cottonwood, and pretty far back from the road, I never found it, but the red tail's cry is unmistakable (and, alas, routinely dubbed in ad and movie soundtracks depicting eagles), and at one point the bird did take briefly to the air (in case I needed any further convincing not to magically rise up and steal its kids) and wheeled to give me a look at its beautiful tail. I also witnessed the back ends, flags up, of a herd of white-tail deer, surprised a little muskrat in the stream, got a fleeting glimpse at a male ring-necked pheasant (introduced from China, but still spectacular and photogenic, if I can ever find one not running for cover), red winged blackbirds galore, and those annoyingly squeaky killdeer distracting me from (accidentally, of course) trampling their nestlings.  And, no question, my life-time best pelican photo op! 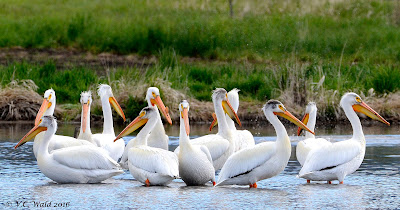 The muskrat in his stream, wide from snow melt in the distant mountains 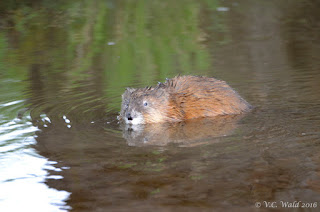 Farther out is a group of fantastic falling-down ranch buildings, silent, just waiting for me to photograph them. From this angle you can just make out in the distance how vast the hay fields are: 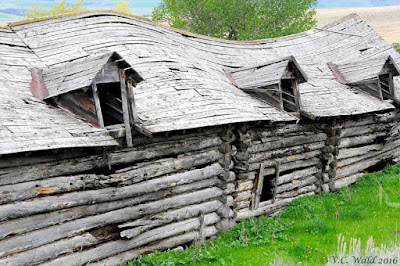 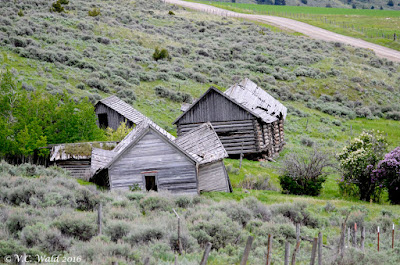 And other signs of Montana ranch life as it once was: 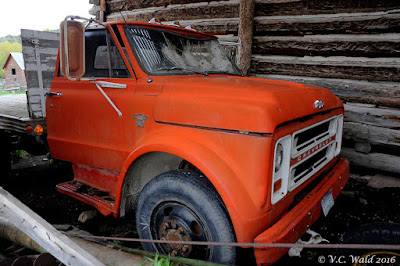 Just beyond the dead ranch is the old but living (as it were) Morgan Cemetery, what a beautiful spot to rest in eternity; the light had faded at this point, so what you can't see is the snow-covered line of mountains beyond the horizon: 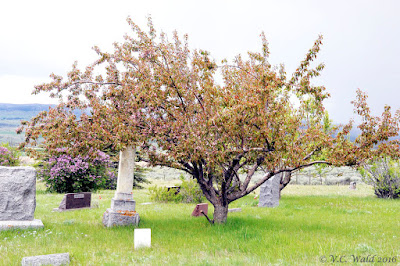 The next unexpected sighting in the sage was these two female pronghorns (aka antelope, though there is no genetic relationship to the old world antelope family). The one on the left, with a peculiar growth on her side, could be seen from other angles to be heavily gravid: 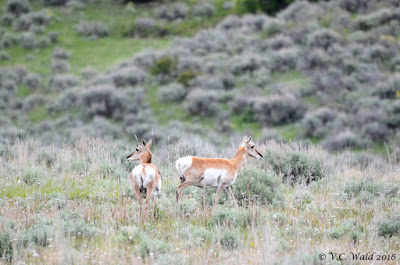 This is public land, which in Montana means there's hunting in season, so the two wary ladies promptly moved over the rise and out of sight of the threatening camera "eye" making it an extra treat to have seen them even for a few moments.
This female red-winged black bird (which you'd never guess even if very familiar with their mates!) posed for me. I love the way her wiry little toes mimic the barbs yet that she is oblivious to the dangerously sharp wire points. 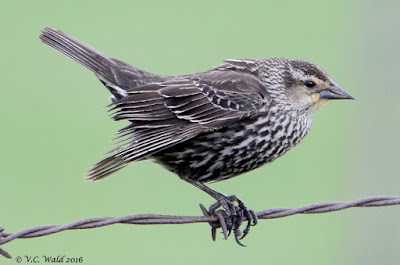 My last hour on Springhill was spent watching mom and pop workin' this roadside mountain bluebird nest box. By then it had turned windy and chilly, so I was thrilled to be in the "blind" of my car, entirely ignored by the very hardworking and not-so-colorful mom, with a beakful of yummy grubs, and colorful pop, removing a "fecal sac," (in effect, changing diapers): 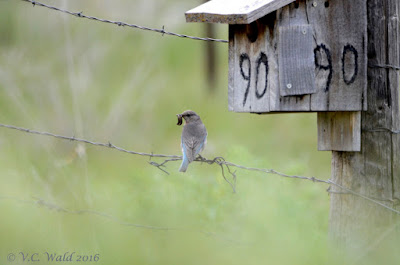 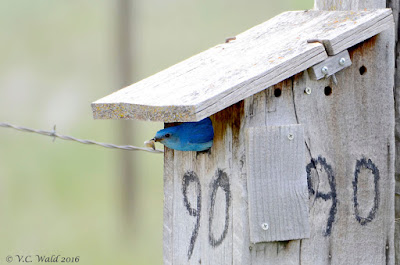 Nature is unendingly wonderful and restorative.