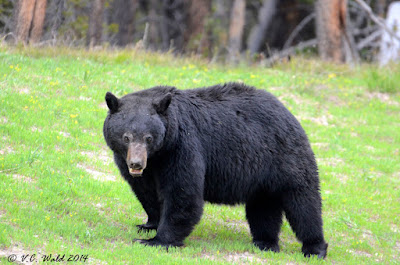 Robert Redford is an admirable man and in many cases we share a love for the same really good stories, among the most notable, Norman Maclean's A River Runs Through It. After being approached by several film makers Norman finally signed rights to cinematize ARRTI to Redford. The result, for me, was a mixed, certainly not a total, success. Norman did not live to see it on screen, so we will never know what he would have thought.
In the movie ARRTI Redford was the author's voice, unseen. Even though I knew Norman, and his voice (in the literal as well as literary senses) very well, it wasn't the voiceover that bothered me but rather the over-simplification of character (all of them) throughout the movie. Since it was directed and produced by Redford I have to assume that was because of the decisions he made, based on his understanding of the people Norman wrote about. Redford and I did not share that understanding.

Bill Bryson is another favorite author, albeit of a very different ilk, and his 1998 A Walk in the Woods: Rediscovering America on the Appalachian Trail is among his outstanding books I can best relate to. Last night we watched the movie, with Redford playing Bryson. Note that while Redford didn't direct the movie (Ken Kwapis did), he was the producer. Which resulted in woefully miscasting himself, most glaringly because Bryson was in his  mid-40s when he walked the Appalachian Trail; at least Redford doesn't pretend (except for the hair dye) to be anything other than the nearly 80 year old that he is. This out-of-time re-imagining of  people in Bryson's story substantially alters it, and the movie should have at least acknowledged what it would have meant to do a harrowing, 2,000 mile hike as an out-of-shape octogenarian, as Bryson did so entertainingly as an out-of-shape middle-ager.  And once again actor Redford goes so far overboard to avoid any hint of emotion (fear, longing, joy, fulfillment, love, frustration, to name a few apt possibilities), when the film adventure was over I was left wondering what, if anything, the Bryson character got out of the experience. Nary a blister, apparently.
Not so with Bill Bryson's original telling of it.
Mr. Redford, it's true what they say, discretion is the better part of valor. To get the best result from your investments, next time step aside and let a better actor play the part, and relinquish control to a better director.
One final note: Hollywood has again availed itself of the opportunity to mis-characterize wildlife, the only representatives of which in the entire film (except for one unremarked hawk flying past a hotel lobby window behind the hikers) were two black bears that stood and "growled," like only trained bears with dubbed soundtracks do, when Bryson and his hiking companion emerge from their tents to witness the animals making off with a bag of food. This is an almost dangerous understatement of the true hazards of cavalier human behavior in the wild.
Posted by Veronica Wald at 1:55 PM

Labels: A River Runs Through It, A Walk in the Woods, Bill Bryson, black bear, Norman Maclean, Rediscovering America on the Appalachian Trail, Robert Redford